Vanderpump Rules Reunion Recap Part 3: Jax Accuses Andy Cohen of ‘Having Something Against Him,’ Says “This is the Worst Reunion Ever” 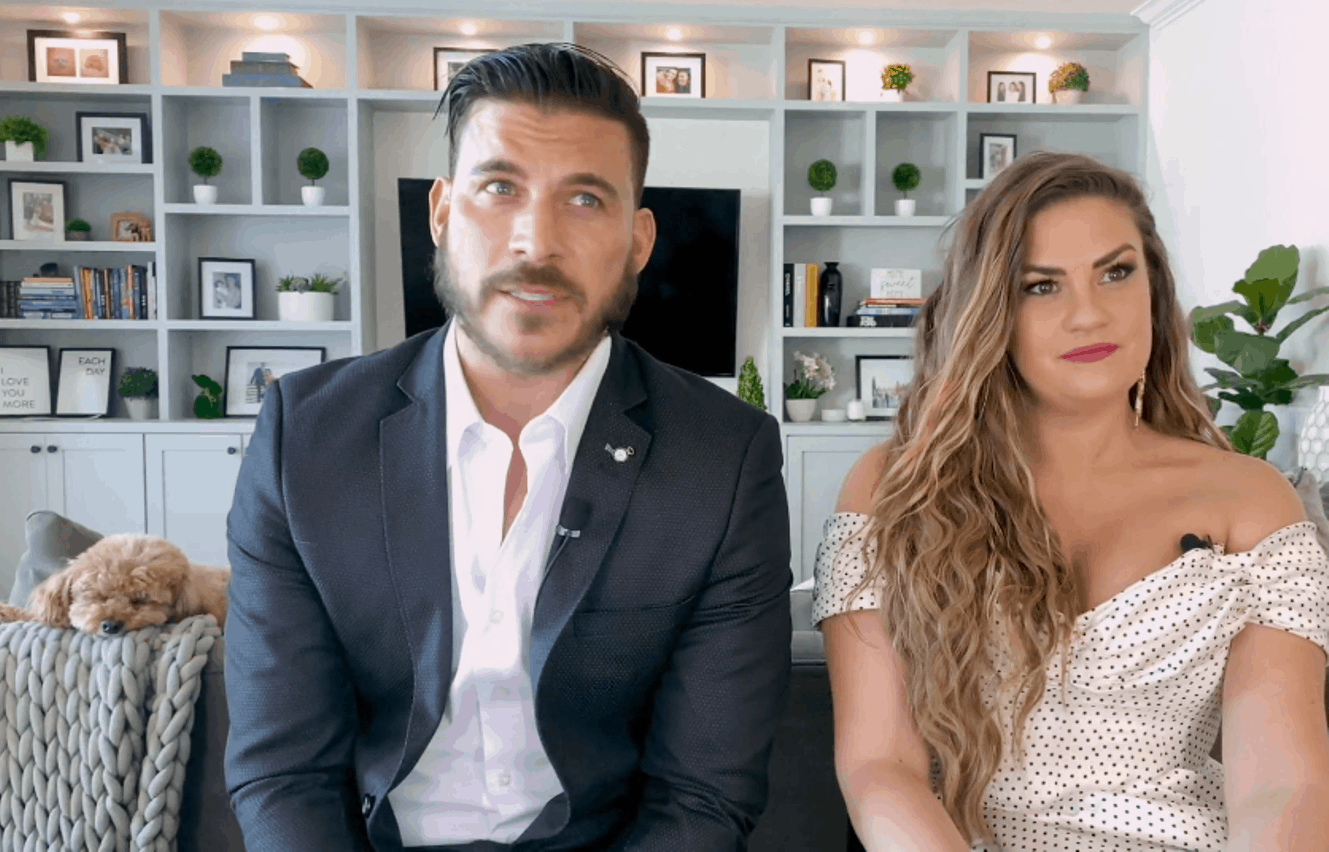 Not sure we will even have a new season of Vanderpump Rules because cast members are dropping like flies and bombshell news gets announced daily. For instance, Stassi has confirmed she is pregnant (!!) amidst her firing, and Brittany and Jax continue to be in the hot seat for their insensitive behavior and remarks… Feels odd to be watching them before all the sh*t hit the fan during this reunion…

Anddd we are back for part three. I am straight cringing watching Stassi act like a bratty, pushy girlfriend pre-engagement to Beau. She calls THAT behavior embarrassing…I would hate to see what she calls her current situation. Hearing Kristen say she doesn’t agree with Carter’s defensive mean-boy text to Stassi upon her engagement is a breath of fresh air. And…LaLa really needs to stop interjecting left and right. Maybe she should stick to her own storyline…IF she had one.

LVP breaks down why Max and Danica are good managers. She sings Max’s praises and only seems to have a problem with his womanizing ways but goes in HARD on Danica. She explains that “I personally have an issue with her…” Ooooh — LVP is p*ssed that Danica told the world that she was having an affair with Brett. I mean, LVP always says how hot Brett is, but Danica miiiight have taken their flirtation a tad too far. Jax and Brittany snickering in the background makes me wanna scream. They’re just happy they aren’t in the hot seat. For now.

Regarding 86ing Danica from TomTom, Max gives an apology (which is something that he appears to be doing a lot lately), but he then defends his behavior and his decision. Danica is appalled that Max banged all of her friends and it’s the same story with those two…

LOL to how sh*tty Brittany and Jax get about their annoying dogs. This is the second time they were unable to control their dogs and it’s curious how everyone else followed instructions and found a way to either keep their dogs quiet OR send their dogs off for the filming. Jax always thinking he can make his own rules…see how that backfires time and time again?!

“It was a little dramatic to say I felt violated.” Yea, Brett. I mean, you knew EXACTLY what you were getting into when agreeing to film Scheana’s video. He is so full of himself. Scheana claims that her blow job or money comment to Brett was not serious. HA. She continues to defend herself as a flirty person by nature, but we all know she really had the hots for him.

I am so Team Charli. She even has a great radar, particularly when it came to Brett. She removed herself from a potentially sloppy love triangle. Brett’s apology to Scheana is weak: “Sorry for giving you the wrong impression.” Ugh. Just stop, Brett. Luckily, we will not be dealing with him in the future…

Ariana shares that her battle with depression is something that she still struggles with. She appreciates LVP’s warmth and help throughout her ups and downs and Ariana explains that she is doing her best to seek the proper treatment…unlike Jax.

Oh God. And so begins the Jax show. If I had a dollar for every time Jax states, “Just that I am incredibly working on myself” I would have AT LEAST $8.00 because Jax has legit said this phrase for every.single.reunion. Ariana is a QUEEN. She calls Jax out for his repeated, bullsh*t phrase since his progress on his work is non-existent and she is essentially telling Jax what every viewer is thinking.

I am cracking up watching Ariana dance and sing, “Jax is bothered!” Brittany trying to defend her hubby because what everyone is saying is true and she can’t quite wrap her tiny brain around it all is classic. Jax feels singled out and becomes defensive because that is what he does when he wants to try and deflect. Andy straight tells Jax to perhaps watch the show and then maybe Jax can reflect on his behavior.

Ariana is straight losing her mind over Jax’s comments, and without actually doing much, it looks like Sandoval has worked his way up to the number one guy of the group. Boom.

Jax tries to explain that his sh*tty attitude toward Max and his beach clean-up had nothing to do with Max. It was more because he was having a bad day. No one buys his stupid excuse, and when Andy tells Jax, “I don’t think you’re that good at apologizing,” I actually applauded.

Andy Cohen wants to know how Brittany feels constantly stuck cleaning up Jax’s messes amongst the friends. It’s like everyone is walking on eggshells around that couple. Stassi puts it eloquently: “We’re scared of p*ssing Jax off and we’re scared of hurting Brittany.” Stassi is talking some sense right now.

Brittany blindly defends Jax as he talks about his mental issues. Ariana makes it clear that this is a serious matter, not one to be taken lightly. LaLa shares that Randall paid for a therapy session for Jax and Jax did not even show up! So much for working on himself, huh, Jax?

Jax then turns his ire onto Andy as he claims, “Andy always has something against me, I don’t know what it is… I just feel like you go at me the hardest.” Andy of course denies Jax’s lame attempt at playing victim, telling Jax his job “is to call people out.” Andy also advises Jax to watch the show, implying Jax’s decision to not watch the show might be the reason he can’t see how awful he is… like we the viewers can.

Jax cannot take criticism from Sandoval and Ariana because they are speaking the truth. Ariana hates that Brittany has settled for *this* life with Jax. Jax, becoming fed up with this “attack,” states, “This is the worst reunion ever.”

Ah, the old psychic birthday gift from Scheana to Dayna. Scheana states that she brought a psychic to Dayna’s house because she really thought it would be appreciated. Dayna was upset about it because she wasn’t really ready to process her mother’s death that way and it becomes an emotional moment for everyone on the Zoom session. Naturally, Jax needs to chime in and explain HIS story about “losing” both his parents, too. In reality, Jax’s father has passed away, but he has chosen to cut his mother out of his life. Dayna defends Jax’s decision to no longer talk to his mom, but even Ariana begs him to try and make amends with his mom.

Stassi and Ariana have a moment. The game of telephone could have definitely ruined their friendship. Scheana is such a dope for spreading untrue rumors and LaLa needs to watch her mouth…especially around this version of Ariana cuz the girl’s FIRED up.

I will still never understand why Max felt the need to insert himself back into the situation with Dayna when Brett showed interest in her. Brett claims to have considered Max’s feelings and even Scheana calls him out. Continuing to show what a jerk he really is, Brett states that things moved too fast for his liking with Dayna and Dayna calls it all bullsh*t.

The TomTom finale party calls for Danica to defend her actions. In case you forgot, she got triggered by the Scheana look-alike and LVP continues her hatred for her. LVP calls Danica a loose cannon and explains that her explosive behavior needs to be handled better…yet she continues to let Jax bartend?! I bet Danica reallllly wishes she never said anything about LVP and Brett now.

Sober James and his apology to LaLa’s man Rand has completely turned around their relationship. James explains that because of Randall, LaLa has been pushed back into his life. Woo. Hoo.

Final thoughts? Welp, Ariana seems like she is wasted and I still can’t stand Brittany and Jax. Kristen misses her friendship with Katie and Stassi and she misses sharing the good parts of her life. Currently, Jax and Sandoval are NOT friends, either. Essentially, LVP’s group is completely unraveling and she really wants everyone to make an effort to get back together. Andy’s final toast invites Brock, Scheana’s new man, Rand, and Ken into the call.

Hold up — wtf is LaLa drinking? Rand! Grab that glass outta her hand! Wish we saw more of Randall this season… OMG Brock in pants that match Scheana’s dress. I cannot. Ken is my hero and their marriage is #goals. Perhaps Brittany and Jax should take notes from them. In the end, LVP toasts to her cast: “To all the growth you’ve really made…” Ah, LVP. If you only could see what the future holds for your show…