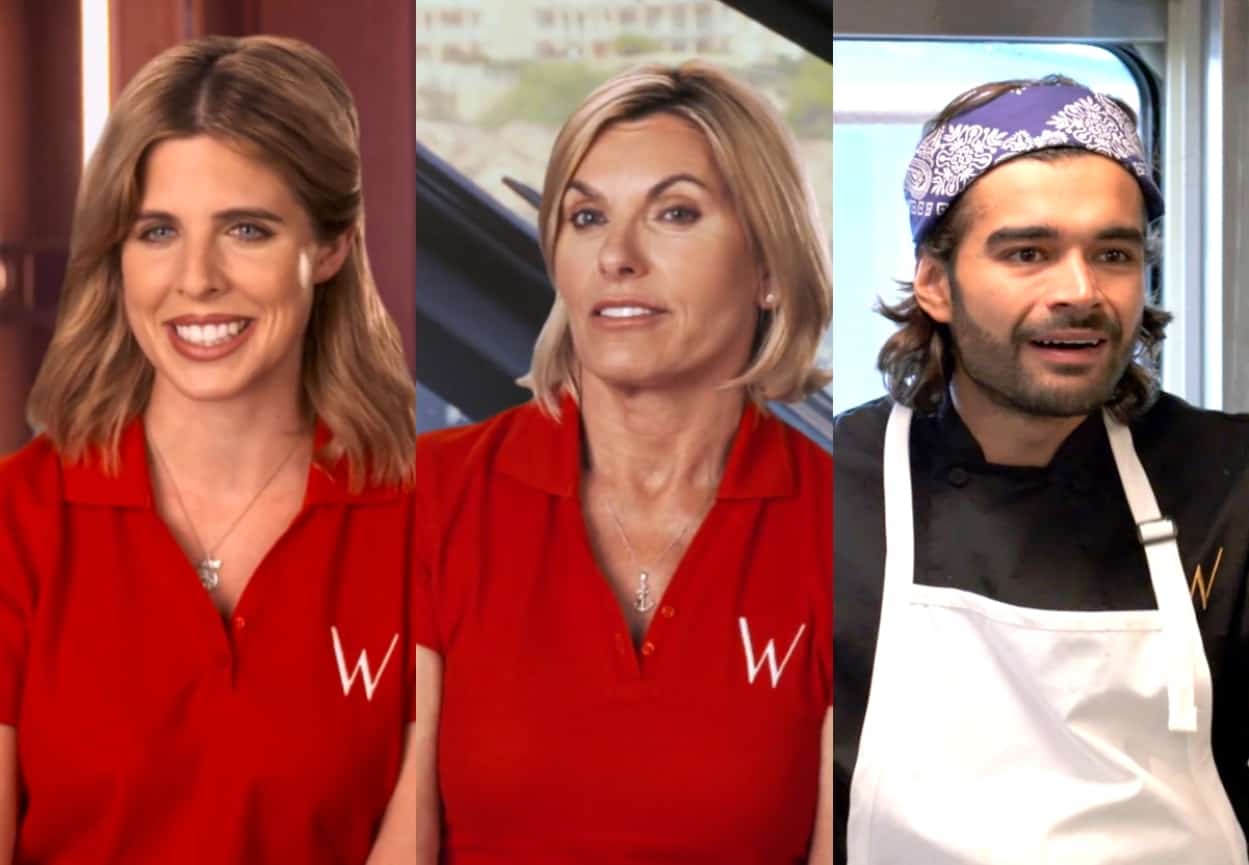 Demanding charter guests and a new stew makes for an interesting episode of Below Deck Mediterranean.

So. Bugsy is bringing the thunder, huh? Malia greets her bestie/new stew like a long-lost relative, and Bugsy, and her accessories, hop on board like she has been there for years. Captain Sandy is thrilled to see Bugsy and hugs her about 75 times. I think it is safe to say that Captain Sandy is pumped to have Bugsy on her crew.

Despite the rain, the show must go on. And that means prep for the new guests who are arriving in mere hours. Bugsy treks all over the boat in search of Hannah and it’s the world’s most awkward greeting. Hannah is in the laundry room with Alex and there isn’t enough room for the girls to hug (thank GOD). And it’s just a cringey moment, especially knowing all the past drama between the two ladies. Hannah reminds us that Bugsy has gone out of her way to throw Hannah under the bus, but despite their differences, Hannah has decided to paste a smile on her face and work through it.

Hannah shows Bugsy around the epic yacht, and when they come to the dining room, she states, “This is gonna be your job because I hate table décor.” I am proud of Hannah for knowing her flaws and for straight telling Bugsy what is up.

Captain Sandy calls Kiko, Malia, and Hannah in for a meeting regarding charter number three…which sounds like a nightmare. Anyone who says they are bringing “the party” to the yacht is trying way too hard…andddd listen, I love dogs, but Mr. Scout, the primary’s dog, needs a nanny because it cannot stay on board?? Ah…to have oodles of money, amiright?

The weather is terrible and that means that they are not leaving the dock…which also means this will be the longest charter ever invented. As the crew preps for the guests, Bugsy finally meets Pete, the Unit and you can almost see him ogling her up and down. EW. To make it even worse, Pete followed Bugsy on Instagram, where he calls himself a captain. LOL. What he should say is a TENDER captain. He is such a try-hard.

Upon seeing Bugsy’s “artistic” table décor, Captain Sandy is essentially Bugsy’s personal cheerleader when she says, “Bugsy’s killing it.” Is it me or are these table-scapes the tackiest thing? Also, why doesn’t Captain Sandy ever praise Hannah? Bugsy has been on this boat for .5 seconds and Captain Sandy won’t shut up about her, yet Hannah has been down a stew, working her tail off, and the captain has issues with how the laundry room was kept. Unbelievable.

Cue the charter guests: “Justin Thornton” (could he say his first and last name one more time?) enters the boat and I can tell already that he is gonna be a real trip. His dog, Scout, gets sent away with the dog nanny and Hannah gives the guests the grand tour. Being stuck on dock sounds terrible. Being stuck on dock with those guests sounds even MORE terrible. They are demanding and self-righteous and full of themselves. Awful.

Why is Alex falling in love with Bugsy? Make it staaaaahp. Sure, Bugsy has great eyes, but Alex, please get to know her before you start planning your wedding!! I, on the other hand, am falling in love with Kiko. He is so adorable whipping up that lunch. Plus, he can COOK.

OMG Pete and his text messages to Lara! I thought we were done with her. Also, is she saved in his phone as LaRa or LaNa? Asking for a friend…

Interesting that the *friend* of the primary is the one throwing the fit about the G-D oysters. Like, come on. You’re not even paying for this and yet you think you can be nasty to the crew because you’re not getting something you thought you asked for, LEON? In the words of Hannah, “There’s a big difference between being demanding and being an a*shole.” Truth. Bravo to Hannah for bringing out Leon’s preference sheet. I love how she basically tells him he is an idiot, without having to tell him he’s an idiot. That shut him up for a short amount of time…too short if you ask me!

Captain Sandy is just being so annoying with Kiko. The poor guy is doing a great job and yet she forces him to talk to the primary. Kiko was so nervous because of his broken English, but again, he does a fabulous job. Take that, Captain.

Hooray when all the guests head out for the evening. They were exhausting! It gives the crew a chance to breathe and regroup. It’s also an opportunity for Bugsy to figure out (fast) that Pete is the crew creep!

As the night wears on, Hannah and Alex are the only remaining crew members waiting up for the guests, who are RAGING at da club. My question is, how did this primary collect such slimy friends? He seems like a nice enough guy…but that Leon dude has got to go.

The dread Hannah and Alex feel before those tools come aboard is real. The guests are hammered and invite some randoms back to the boat. The fact that it is nearly 4 a.m. and they don’t look like they are stopping any time soon causes me to really sympathize with Alex and Hannah. FINALLY, the guests wind down, and Hannah’s face when the random guests leave is incredible. It isn’t until about 6:30 that Hannah finally turns in. WOOF. No wonder she hates her job!

The next morning, there’s a small window when the captain thinks the boat can leave the dock. The wind speed is juuust right, but alas, a guest leaves the boat for a walk and the plan falls through. The deck crew is hurriedly trying to undo what they just did to dock the boat yet again, but Pete messes up. It’s official: Pete is the worst. He screwed up, but he refuses to acknowledge it and is snarky and sarcastic with the captain. Pete even goes as far as saying he didn’t say what Malia claims he said, but here’s the thing, Pete. YOU ARE BEING FILMED. ‘Member when Pete was supposed to be edited out? What in the world happened to the editing!?

To save face and keep the guests happy while the yacht remains docked, Malia comes up with a brilliant plan: toy island. It’s a total creative move, but I am not sure if she thought it through all the way. Beach picnics are never a good idea and there are a ton of moving parts. Kiko is stuck whipping up meals for the guests and their random friends from the night before, and the set-up on the beach looks utterly grueling. It was cute to see Rob showing off towel folding techniques Jess taught him. What’s not cute is that Rob has a GF and he is DEF falling for Jess…

Once everything is settled on the beach, the guests get their food and drink, and Mr. Scout, the dog, is reunited with the primary (Justin Thornton, in case you forgot). Then, Captain Sandy gets a dreaded phone call. All of the glass and tenting on the beach must be removed as they are prohibited. Wow. So they just KILLED themselves to get this all ready to go, only to have to tear it down and deal with the remarks of the troll guests?

As if that is not bad enough, poor Kiko has just been told he will have to cook 72 dishes for dinner. Because the randoms are joining the guests for dinner. 72 is wayyyyyy too many. I am exhausted just thinking about all that work…these guests better leave a baller tip!