Below Deck Mediterranean Recap: Pete Gets Demoted and Bugsy Tries to Throw Hannah Under the Bus, Plus Kiko Melts Down 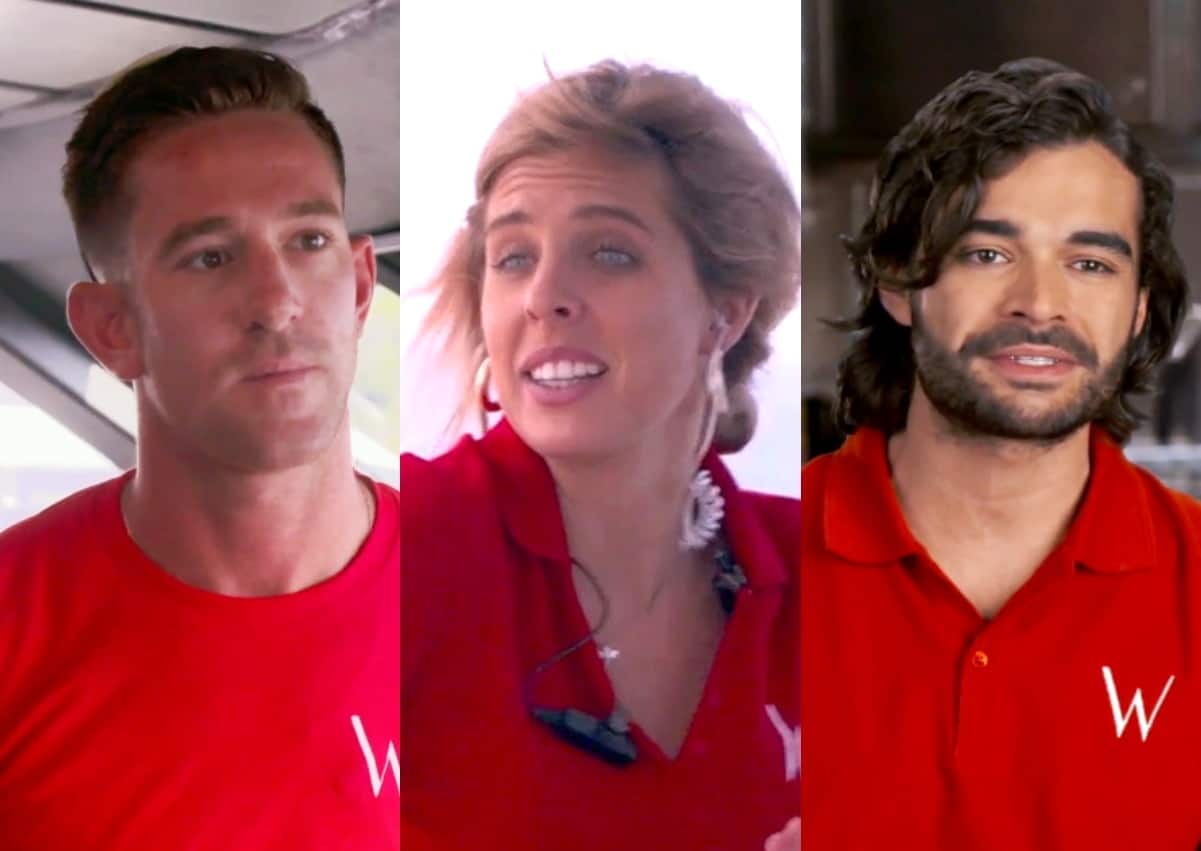 An injured stew and some needy charter guests rock the boat on this episode of Below Deck Mediterranean.

Great — just what this boat needs. An injured stew…riiiight when they finally had a fully functional crew. Jess has slammed her finger in a door and Nurse Bugsy runs to her rescue. Captain Sandy sends Jess right to the hospital and things aren’t looking good for her. Guess the interior will never catch a break, huh?

Pete is still creeping around, saying sexually motivated things to anyone who will listen. For instance, when asked what is wrong, Pete states, “I need a release.” EW, PETE, YOU ARE GROSS.

Charter four: vegan real estate moguls. Fantastic. Kiko is so not looking forward to cooking for this group. I mean, how will he ever be able to create a vegan Moqueca? Luckily Jess returns…with a fractured finger. Hannah looks like she is gonna barf when she sees the wounded stew, but Jess tells her not to fret. After all, Jess got a boob job and worked immediately afterward on a charter in the past. Hannah tells Jess, “Let’s hope your hand heals as quickly as your tits” and I can’t help but agree with that statement.

Captain Sandy finds out the details of Jess’s injury, and instead of making a call, she tells Jess to see what Hannah says. Interesting that the captain chooses *now* to lessen her managerial role, as she always seems to have her hands in everything on the boat. Jess has this charter to prove she can function as a stew, but let’s be honest. Jess was a mediocre stew BEFORE this injury…safe to say she is not gonna be shining right now.

Bugsy finds Malia and spills about Pete’s inappropriateness. To be honest, I am not sure how Pete got away with his behavior for this long, but alas, I guess they needed content. Malia tells Bugsy to report it to the captain and I think Bugsy has reached her limit when it comes to Pete.

I love the new besties, Kiko and Hannah. Hannah confides in Kiko that she is stressed. She doesn’t like that Jess’s fate is in her hands and just prays that if she has to let Jess go, she won’t wind up with a sh*tty stew…round three.

With four hours until the next charter, Hannah holds a quick meeting with her girls. They discuss the challenges that could arise based on Jess’s finger. Bugsy steps up and says she will pick up the slack. Hannah gets annoyed that Bugsy volunteers to help out extra during this charter, but she should be thrilled Bugsy is working over-time…I mean, she is saving everyone’s a*s.

Later, Bugsy, and her questionable hair accessory, finds Captain Sandy. She fills the captain in on Pete’s behavior and explains, “To be honest, he is like slightly threatening.” The captain jumps right to Bugsy’s defense and immediately calls Pete to the bridge. She is P*SSED. The guy doesn’t know what’s about to come. Captain Sandy lays into him and wants to know his side, but really, we all know she doesn’t give two sh*ts what Pete has to say. He has crossed the line, and as he explains, “I might have said some inappropriate things and I became too much of an open book.” Yup. That’s exactly what happened, Pete… (eye-roll).

Kiko is cursing the vegans, Hannah is trying to organize the mariachi band, and Malia is giving it to Pete…She demotes Pete from lead deckhand and I am so proud of her for letting him know that his ego and cockiness have led to his demise. Malia warns Pete, “Consider this your 1, 2, and 3 warning,” and I am shocked to see how he takes it.

Pete sulks away like a sad puppy and I momentarily feel bad for him, but then I remember that he is the WORST. Pete asks to talk to Bugsy and even his apology is creepy. He looks like he is trying to seduce her with bedroom eyes as he tries to smooth things over with her. Bugsy is a saint and accepts his “I’m sorry”, but I sure hope Pete just gets the boot.

Well…this looks like quite an eclectic group of charter guests. I mean, they’re juice snobs and vegans and apparently mushroom obsessed. Kiko has his hands FULL and is stressing big time.

Pete, hurt and angry, has decided to show another side of himself to the crew. “Watch out for Professional Pete.” Now, where the EF was THAT guy all season?! It’s cool to know that Pete has multiple personalities, amiright? But really…how many names does he have? The Unit…Party Pete…all of them = annoying.

Jess is complaining left and right, and I feel like it’s not just cuz she is incapacitated due to her fracture. She hates every chore, although unpacking someone else’s luggage is a bit extra. Speaking of extra, how bout Bugsy throwing Hannah RIGHT under the bus when there were no lemons on board? Even Kiko noticed and that guy sees rainbows through storms.

Malia can’t get over how well Pete is taking his demotion. He is actually working for her now, which is new, so there’s that. With all the water toys in the water, the guests quit complaining for a short amount of time and enjoy. Of course, they break rules and Malia has to yell at them, but I digress.

First the lemons. Then the mushrooms. What is with the provisions this charter?! Poor Kiko can’t catch a break. Maybe if the guests didn’t insist on scarfing down two days’ worth of mushroom provisions in the first three hours, there wouldn’t be a problem! Also, Bugsy, STFU. Don’t you ever call Kiko a hot mess ever again. He is an angel.

Listen, Jess…if you wanna keep your job, try a little harder. Stop relying on Rob! And maybe if she stopped sucking face with him, she would actually get something done.

Dinner was set for 9:30, but Kiko is waiting for MORE mushrooms to be delivered and the guests are basically gonna eat their arms. Kiko has trouble with timing, which is interesting considering his 72 plate meal was on time. Why does the captain insist on creeping into the kitchen? Also, why does she ask if dinner was on time when ya’ll know she knows Kiko is in the weeds? Trying to be buddy-buddy with Bugsy is not a good lewk for the captain. Maybe Captain Sandy should take her micro-managing and actually start managing the crew. First order of business: fire Pete. BOOM.

Not to talk smack about Kiko, but I gotta say, that mushroom teriyaki in tinfoil looked a liiiiiitle wack. But I don’t get these guests. One minute they are cheering for Kiko and the next minute they are complaining about their underdone fish. At least Kiko knows and admits when he messes up. Perhaps Pete should take a page from his book?

Kiko is bummed to hear that the guests are still hungry after he cooked his heart out for them. He is legit beating himself up and Bugsy is not handling him with kid gloves at all. Bugsy is such a know-it-all. Kiko states, “Today I have the worst day of my life I think.” Please stop calling yourself dumb, Kiko. Also, someone please grab those bells out of the guests’ hands. #saveKiko