Home Real Housewives of Beverly Hills News RHOBH Recap: Camille Gets Confronted by Lisa Rinna Over ‘Mean Tweets’ as Some Favorite Housewives From the Past Return For Drama at Kyle’s Party

RHOBH Recap: Camille Gets Confronted by Lisa Rinna Over ‘Mean Tweets’ as Some Favorite Housewives From the Past Return For Drama at Kyle’s Party 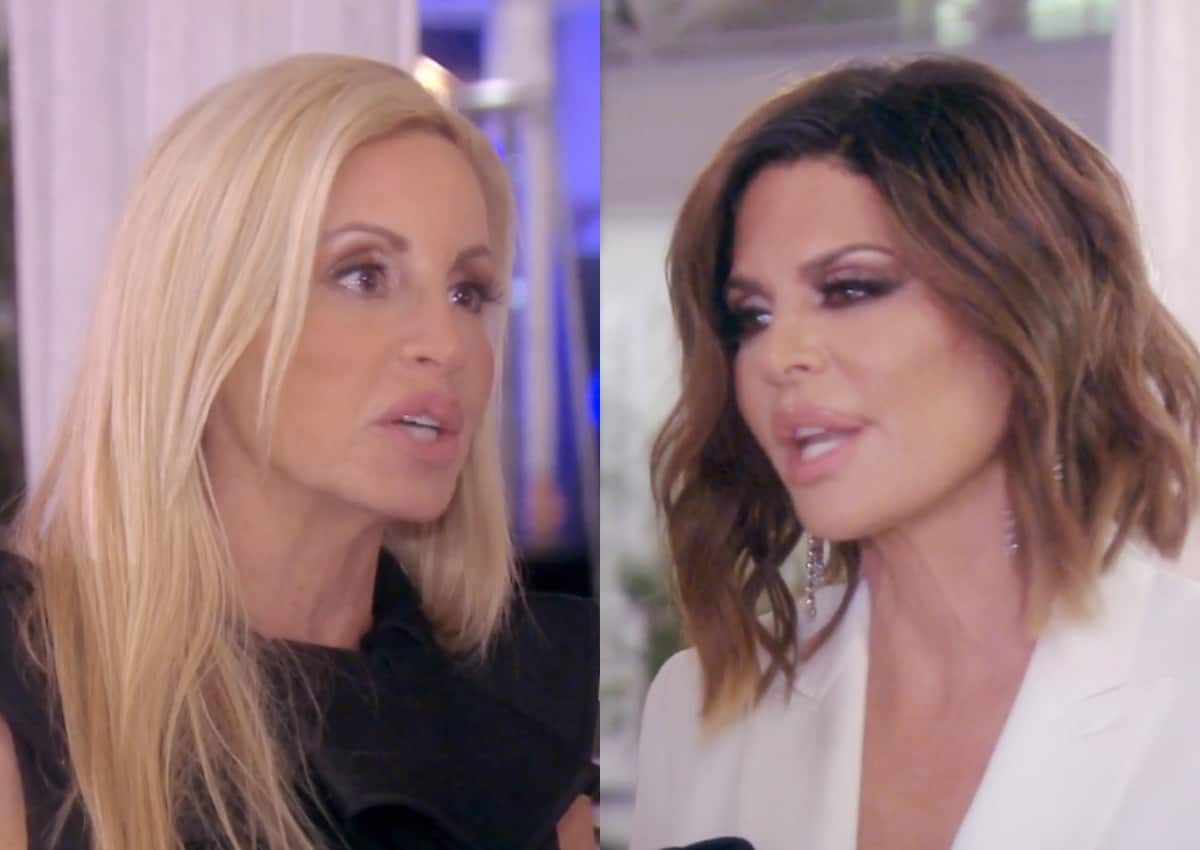 A MAJOR party brings some MAJOR cameos on this episode of the Real Housewives of Beverly Hills.

Oh. Em. Gee. Camille is in the house ya’ll! Kyle treks all the way to Malibu and gets a tour of Camille’s newest crib. Camille still doesn’t open her mouth all the way when she talks. However, she *is* willing to talk with Kyle after icing her out for a few months after last season’s reunion. Camille sits down with Kyle and hopes to clear the air. Naturally, Kyle feels as if she did nothing wrong and as if she can longer trust Camille since she has been two-faced in the past. AKA…Camille stood up for LVP and Kyle is still irked.

Camille explains that she felt as though she was under attack, but she apologizes despite being upset. Kyle saying she “doesn’t hold onto things” makes me LOL. She is a joke when it comes to that, but she is hopeful that all the women can be okay in a group setting one day… Cue the invite. Kyle is hosting a fundraising black & white party at her house and she has decided to invite Camille. Some olive branch.

I never saw a woman get so excited over a ruby red grapefruit in my life. Denise, what has this season come to for you? She decides to have a chat with Rinna and begins to state her beef. As they nosh on some skinny fries (WTF are those? A Bethenny Frankel trademarked potato?), Rinna needs to know where the line is because Denise has no problem sharing her husband’s penis size. She goes as far as telling Denise, “I need you to take some sort of responsibility.” Who the EF is Rinna telling her what to do?

Rinna goes on to say that Aaron is not helping Denise’s cause and the “huffing off” is certainly not making things better. Denise wishes to drop this drama amongst the women. It must be tiring carrying the weight of the entire show on your back, right, Denise?! Leave it to Rinna to think twisted things: “I think Denise may be using the show to change her image from last season.” Whoa. Those are fighting words. In conclusion, Rinna tells Denise, “I feel like you’ve learned a lesson,” buuuut that she hopes to see her at Kyle’s party. I can’t.

WHAT IS KYLE WEARING?! She has been a disaster this season between the bangs and the wardrobe choices…yikes. It’s prep time for the Children’s Hospital of LA event. As much as Kyle is a pain, she does throw one heck of a party.

Kyle’s new bestie, Dorit, comes over for some planning support. When Dorit finds out that Camille is attending the party, she moans, “I know it’s fire season…I didn’t realize the snakes were out as well.” Dorit bringing the digsssssss. She has ZERO time and ZERO interest in making amends with Camille. Camille did a nice job of bringing up personal and legal issues of Dorit’s last season, so therefore, Camille is on Dorit’s sh*t list.

Dorit is certainly very helpful this season. She hooks Kyle UP for the impending auction to be held at the event and it is clear that she has some pretty stellar connections. Must be all the people she owes money to. Too soon??

Hey, Garcelle! Legit almost forgot you are on the show since you are amazing and have managed to keep yourself out of all the petty drama. Instead, Garcelle is hearing about scripts and doing big things. Although this script sounds like somebody needs a graphic organizer. Who the hell wrote that thing cuz that’s not what Garcelle originally composed? Unfortunately, Garcelle is not quite ready to make her directorial debut yet…so much for her being a triple threat!

It’s the night of Kyle and Mauricio’s party and the ladies are glamming it up. After getting ready, Dorit explains the Aaron drama to her hubby, PK. She wishes to have PK pull Aaron aside (as if Aaron is gonna listen to this chump) and tell him to stay out of the drama. Leave that for the ladies!

Eileen is back and I am here for her brown hair! I am thrilled to see her, but I do not enjoy how Rinna and Erika feed Eileen full of the dramatics on the ride to the party. Eileen hears an earful about Aaron and has already passed judgment on his alleged “man-splaining”/ bullying.

In other news, Mauricio is still my favorite house-husband, especially when he tells Kyle to call Ghostbusters when she complains about the lights in the pool. Kyle runs around micro-managing her family and telling them things like “please go get presentable.” She is too much, especially when she admits that “the party cost me six figures.”

Of all the women to roll up first, in walks Camille. This staging is incredible. It’s too perfect that Dorit and PK come next and legit shun Camille. Classic. As more and more of the ladies arrive, Kyle takes the crew on an auction tour and then blurts out, “Oh and by the way, Camille is here!” Smooth segue, Kyle.

Side note: Hey there, Teddi. Did you get demoted to a friend role? Where the heck have you been this season? Scratch that…stay where you were. You don’t bring much here anymore anyway.

When Rinna hones in on Camille, sh*t goes down. After a quick pep talk from Eileen, Rinna waltzes up to Camille and says, “Camille, you are an a*shole on Twitter.” Well, that’s a heck of a greeting! Isn’t everyone kind of an a*shole on Twitter, TBH? Camille really should have told Rinna that she’s an a*shole IRL, but when Camille pulls a z-snap, I die. Rinna claims that Camille does not take responsibility for her own behavior and I forgot that Rinna is a saint…

“Momma’s got a new boo.” Garcelle brings her new man around and I think she is straight crazy for leading him into this pack of wolves. Hold up: What is this, BravoCon?! Adrienne Malouf?! And then we have Kris Jenner, I mean… #Kyle’sFriend? Did Kyle just invite all of Calabasas? Just when I thought she was finished pulling out all of the tricks, BRANDI makes her comeback. Evidently, a crying video of Brandi on social media caused Kyle to soften up. Hence, the invite…And because we gotta get this Denise drama brewing already, amiright?

I love how the girls all congregate on one sofa. Also, Garcelle. Where is your guy?! You left him to fend for himself?? Garcelle is the opposite of Denise, who insists on entering every event with Aaron attached to her hip. The air seems to change when that couple arrives, and you can almost see the women brace themselves for battle. What is with Brandi nearly pulling Denise off of Adrienne? Interesting foreshadowing when Brandi insists Denise sit riiiiight next to her during the live auction, huh?

In the midst of the auction, PK finds Aaron and gives him a stern talking to. LOL. His old saying about the tree is lost on Aaron…that guy has no idea what the heck PK is talking about.

Post auction, Denise takes a minute and pulls Teddi aside to discuss their issues. In the middle of the serious talk, Kyle drags Camille over to say hello. It is not lost on me that Kyle may be trying to save her homegirl Teddi from Denise, but I digress. Camille gets cozy on the sofa and the convo turns to Teddi’s pregnancy. Except Teddi is not having it. She straight tells Camille to save the pleasantries cuz she knows Camille truly doesn’t care, and it’s the first time I’ve seen Teddi have a backbone all season! All I know is that this episode had some LIFE in it. Maybe we should bring back the housewives of seasons’ past more often?