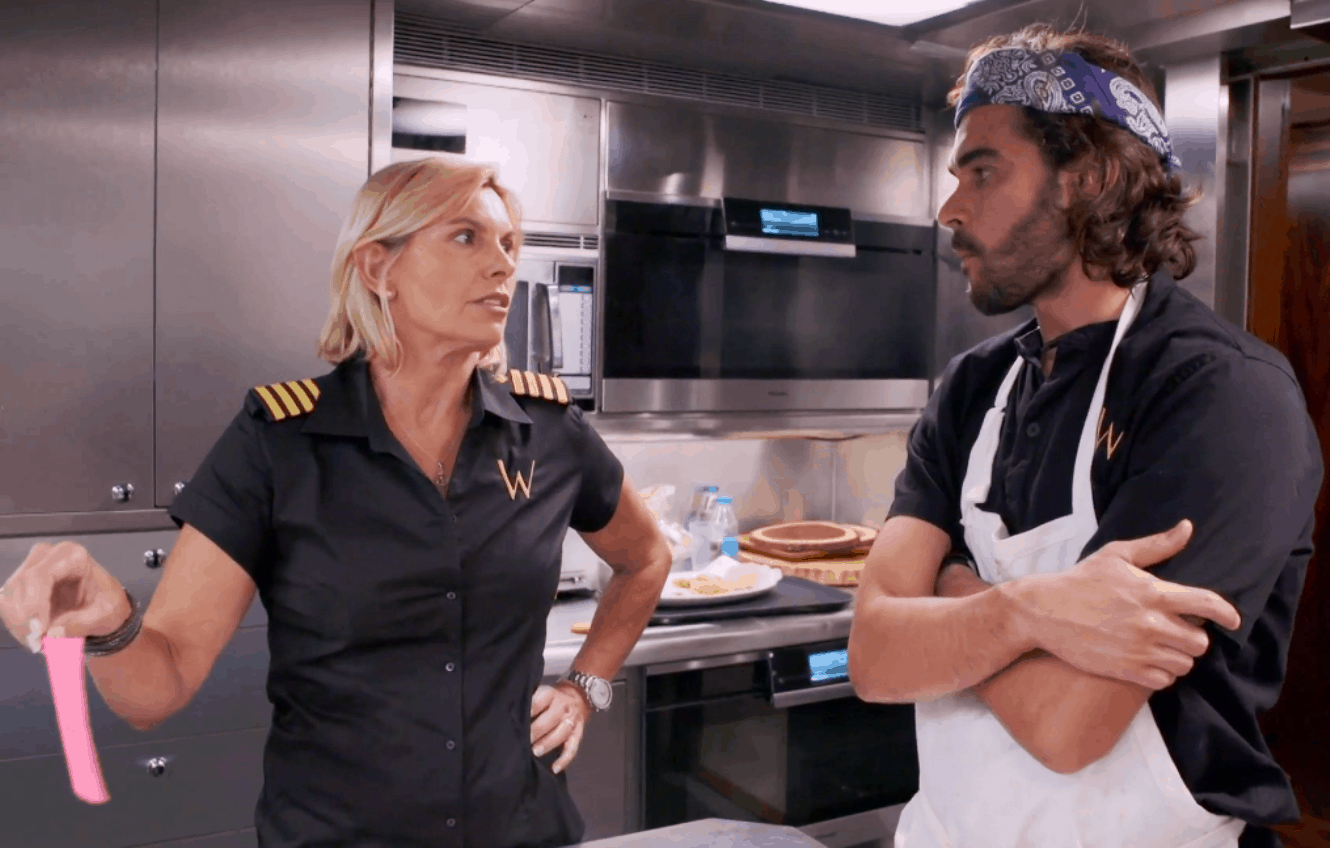 Captain Sandy is on a tear and she wants one thing: to protect her reputation. She claims that her threat conversation with Kiko is not a “beat-up session,” but she is dead serious that if he doesn’t step up his game, he will be off the boat. Kiko is so upset by this that he doesn’t even want to go out for the night. OMG, seeing him cry def makes me cry!!

For charter number five, Captain Sandy gives Kiko, Malia, and Hannah the run-down during the preference meeting. Poker night. Casino night. Nachos. And fried chicken. It’s a four-day charter, ya’ll, so that means everybody’s gotta bring their A-game. Captain Sandy is legit prepping for this charter like it’s a championship football game and Kiko is her injured quarterback. No way Kiko is going to be able to perform his best knowing that Captain Sandy is simply just waiting for him to mess up.

It’s a night off for the crew, but Kiko hangs back to prepare. He is taking this very seriously, as he doesn’t wanna lose his chance. Although the flirtation continues, Alex is beginning to realize he has “no chance ever with Bugsy Drake.” Oh, dear. Bugsy needs a stylist. I died when Hannah said, “You look like one of your tables.” I don’t know what’s worse: Rob feeding Jess over dinner or Alex flirting with Bugsy.

BTW: Bugsy. It is time to drop your 14-year-old heartbreak. Alex likes you. It is very clear. Speaking of very clear, Hannah def doesn’t wanna be there. She looks bored out of her skull and she totally misses Kiko. Their friendship is my favorite thing. It is important to keep nice people around, especially when there are so many mean girls around. Take Malia and Bugsy, for instance. They whisper about Kiko and explain, “I don’t care how nice a person is, you don’t keep them around…” What a duo those two are…!

I mean, get a load of Kiko with his wine and his guitar! Captain Sandy can’t fire this guy. Malia and Bugsy better stay out of Captain Sandy’s ear and give the guy the fighting chance he deserves.

There are only four hours to go before the next charter comes on board. Seeing Hannah give Kiko that hug really pulls at my heartstrings. Nothing like the underdogs sticking together. Hannah is def trying to help Kiko out this time around and changes things up a bit with the service. But for the love of… Will the captain ever just trust her crew?

The way the captain sits back and watches Malia talk to the deck crew is ridiculous. She is micromanaging everything but smiles smugly when she overhears that Jess has been messing up laundry. Alas! Something for Captain Sandy to pick on Jess about. The captain runs to Hannah and demands she give Jess this warning: As laundry-gate continues to spiral, she is ready to cut the fat when it comes to Jess. Jess is also on the chopping block.

Jess doesn’t quite take Hannah’s message well. She is annoyed that “these confusions are penalizing” her and is p*ssed that Malia threw her under the bus in front of the captain. According to Jess, she is taking care of the crew’s uniforms, but “personal clothing during charter is not a priority.” Jess finds Malia and lets her know that next time, she better talk to HER if there is a problem, rather than run off to the boss. Really, though, could Malia be any further up the captain’s a*s?! Also, isn’t it a bit curious that Malia’s *chef* boyfriend is coming to visit juuuuust as Kiko is about to get the boot??

Malia clearly doesn’t like confrontation and did not like that Jess believes Malia ratted her out to the captain. Hearing Malia say she didn’t mean for it to get to Captain Sandy is an eye roll statement. Suuure, Malia. Also, why is Malia blaming all of this stuff on Hannah? She is queen pot-stirrer. When she runs after Jess, she makes it clear that laundry isn’t just Jess’s problem. It starts from the top — and the top for Jess is Hannah. Two-faced much?

It’s showtime. The charter guests arrive and they are ready for their four-day charter. It doesn’t help that the primary’s wife demands to have a chat with Kiko right from the get-go. No pressure at all! When “Keedo” (as the primary calls him) arrives to discuss the menu, he gets bombarded with preferences, but he is ready to rock.

It’s lunchtime and that means one thing: Captain Sandy must come lurk. It appears, much to her dismay, that the guests are enjoying their meals. The captain is being so judgey-judgey. Maybe she should just cook the meals herself now? She is certainly not offering any help or positivity to Kiko. He is straight deflating.

While out on jet skis, the waves are crazy and two of the guests capsize…wearing life jackets. Malia dives in Baywatch style and drags the guests to safety. Talk about dramatic. It appears as though everyone is okay, but you better believe that Captain Sandy is gonna give Malia a gold star sticker for her heroic efforts.

Hannah trying to help Kiko is adorable. Their friendship melts my heart. She talks him into some chicken and potatoes for the charter’s anniversary dinner…because that’s what the guests like. Speaking of guests, did they just call Bugsy “Bugsalicious?” Awful.

Sidenote: Pete’s been awfully quiet these days, huh? I love it.

That anniversary tablescape looks like Party City just exploded, but of course Sandy is all about it. “You’re so talented, Bugsy.” Unfortunately for Kiko, the captain is sitting at the dinner table tonight. When he says, “I don’t f*cking care anymore,” I have to applaud him. You do you, Kiko.

Captain Sandy WANTS Kiko to fail so badly. Her leading skills are certainly questionable. The way her eyes dart around just clinging to anything negative is pathetic. Again, Kiko delivers. Again, Captain Sandy is disappointed. You know it pains her to tell him he did okay, but she can’t let it go. The captain needs “yacht-style” food…and Kiko’s, well although it tasted good, didn’t look very pretty. Why didn’t she tell Kiko that the guests called his food delicious? I guess it’s a lot more fun for her to watch him squirm and question his entire career, huh?

The next day, it’s time for an excursion and Hannah is my hero. She sends Alex and Bugsy (hello, sexual tension) to do all the dirty work. I think it’s so funny how Alex says he “loves that Bugsy is weird.” She certainly is… Nothing is as awkward as when Alex lays one on Bugsy AFTER buying her a cheesy visor whilst touring the town.

Hold up: Although I am #teamKiko, his “Vegas” menu seems a little lackluster. The poor guy had to Google “Vegas food.” Kiko seems pretty into his plan of attack, but I am legit worried, even after Hannah coached him into cooking some dishes for the evening (ie., truffle fries, nachos…). Captain Lurk continues to pop into the galley and won’t cut Kiko a break. But when Bugsy suggests the male crew dress up as “The Wellington Dales,” it’s a great idea. Honestly, Bugsy can say ANYTHING, and the captain would go gaga over it.

Oh man, this dinner is a fried food fiesta. It’s like Kiko is cooking for a seven-year-old’s birthday! Dish after dish is cringe-worthy, but the guests were nice enough to call the food tasty. The straw that breaks the camel’s back over dinner is when Kiko attempts to send brownies to the table in the middle of the meal. Bugsy is so appalled by this that she runs (almost into) Captain Sandy and decides she is going to overrule the chef’s orders. The way Captain Sandy cheers Bugsy’s anti-chocolate-on-the-table-when-there-are-still-nachos-out-there is gag worthy: “Yeah! That’s right!”

Hannah can see the writing on the wall and knows that Kiko is toast. She states, “I think I’m gonna need some therapy after this season.” I mean, why is Captain Sandy talking about Kiko IN FRONT OF THE GUESTS? Perhaps she should have taken some time to discuss the menu with Kiko PRIOR to the dinner instead of getting inside his head and watching him crash and burn.

Whoa, whoa, whoa. Captain Sandy actually did not side with Bugsy about something! Are pigs flying? These nachos have gotten the captain so hot and bothered. Captain Sandy can hardly believe Bugsy would even serve them to the guests because they looked so mediocre. She is FURIOUS.

Bugsy LOVES delivering the message to Kiko that Sandy is p*ssed. She gets a sick joy out of it, and almost as if on cue, in walks the captain. The galley is her home away from home. When she questions Kiko about his menu (after the fact), Kiko explains that Hannah helped him create it. The captain snaps, “Please leave Hannah out of this. This is not her fault.” Eh, Hannah. If you’re that tight with Kiko, maybe now would be a good time to step in and admit that you actually did suggest 99.5% of this menu to Kiko? Captain Sandy lays into Kiko and tears him a new one. She won’t even let Kiko come to the table to apologize.

Captain Sandy goes low and calls the meal just served to the guests “crew food.” Here’s an idea: Address Kiko in private, Captain. Perhaps not in the galley? Where everyone can overhear your bashing session? She tells Kiko to “just get through this” charter and then he will leave and Kiko graciously understands, the way only Kiko could. He explains he tried his very best, but that’s just not gonna cut it for the captain… Anyone else notice Malia hovering in the background…texting? Perhaps her CHEF boyfriend??