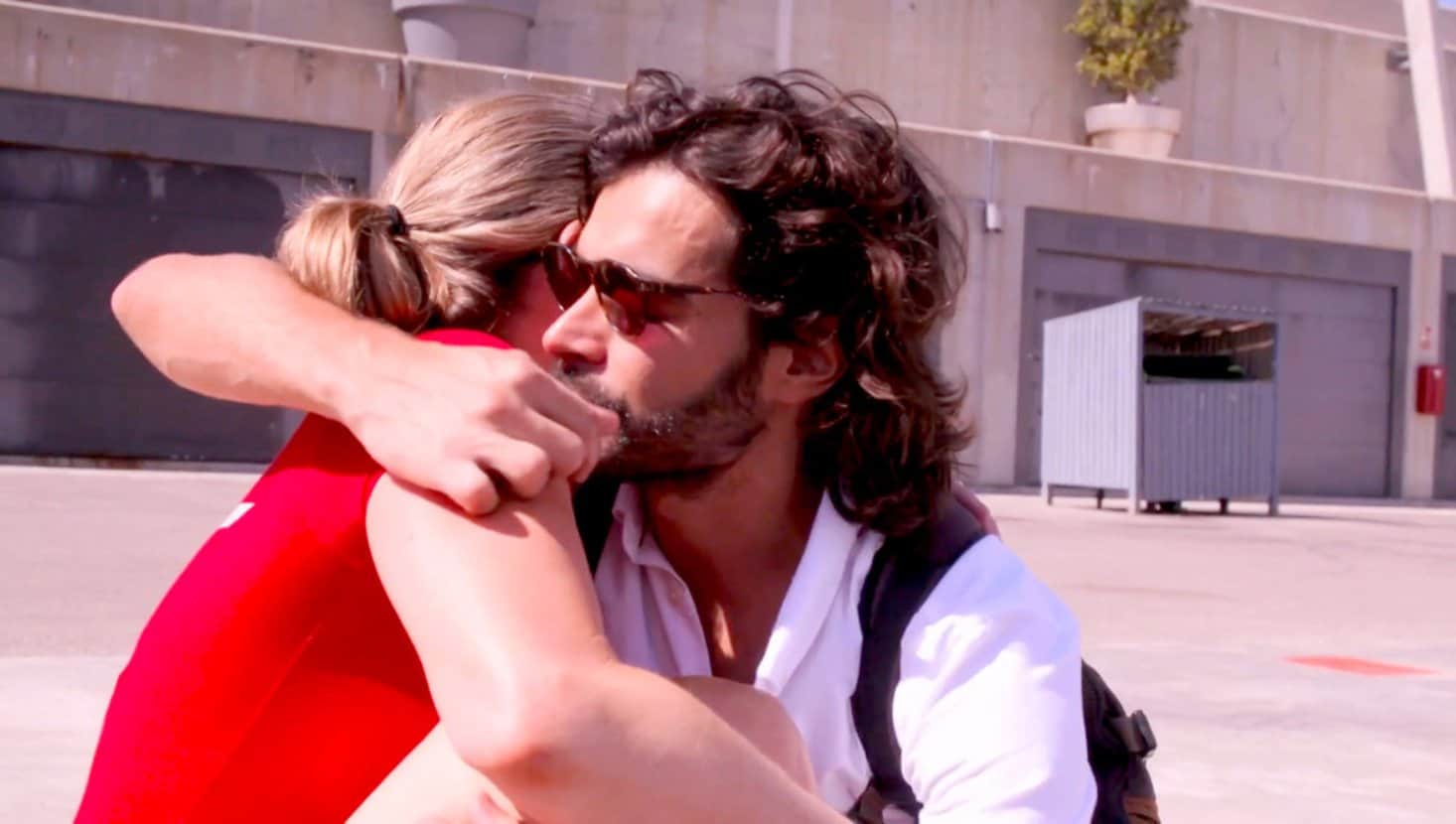 On this episode of Below Deck Mediterranean, Kiko says goodbye, but not before finishing the charter with a bang.

Captain Sandy: “Let’s just get through this charter.”

Say it ain’t so! Kiko is the only person on this yacht who does his job with true heart. It really makes you wonder about Captain Sandy’s priorities…. she allowed Pete, the gross sexual deckhand, to stay, but Kiko? No way. Hey, at least Captain Sandy realizes that she is just hammering Kiko, but she still makes no qualms about the fact that he sucks at his job. Kiko is being so brave. I mean, I’m crying after that Captain Sandy confrontation.

When Kiko tells Hannah that he is fired after the charter, she gets incredibly emotional all while looking like a scene from Titanic by the front of the boat. It is that guilt. Hannah knows she was the one who told Kiko to make that kind of “Vegas food.” I wish she would speak up and tell the captain!

Anyone else notice how fake Bugsy and Malia act when they realize Kiko’s been fired? So annoying. Bugsy simply carries on and preps for the guests’ Vegas-night-strip-show. Malia does some crazy handstands, Pete pretends to be a Chippendale’s dancer, and Bugsy is grinning like the Cheshire cat. Bugsy is totally laying it on thick so that she can make Hannah look like she is slacking. That’s her specialty: make others look bad while she “shines!”

Later, Captain Sandy asks Hannah, “Why are you shaking?” I wish Hannah would retort back, “Why are you lurking?” I would really appreciate it if Hannah would come clean about her dinner suggestions that got Kiko the boot. Kiko is crying in his bunk for crying out loud. Plus, the captain is really pressing Hannah about her mood and her behavior. It’s like she knows Hannah was involved, but she simply wants to hear it come out of Hannah’s mouth.

At 3:55 a.m., Hannah stirs and Malia wakes up to check on her. Hannah is having a panic attack, probably from all of that pent up guilt and from hearing over and over and over again how incredible Bugsy is at her job. That would really get to someone! When Hannah tells Malia, “I need Valium right now,” Malia seems flabbergasted that Hannah would suggest a prescription drug at this time… Luckily, Hannah was able to calm down after taking some and the night wears into the early morning.

Kiko is up early, but he isn’t his normal smiley self. I can’t blame the guy. Really, how is Kiko supposed to be expected to cook after being told he is getting cut? It is baffling to me. OF COURSE Captain Sandy makes sure to meet him in the galley to sort of rub it in his face that this is his final cook. Kiko feeling like a loser makes me the saddest.

OMG — Kiko going back to bed is so bada*s. He is sort of like my hero. Kiko explains that he cooks from his heart and emotions, and when he is sad, he simply cannot cook. Kiko leaves a few platters of food for the guests, but he heads back to his bunk to wallow in his misery. It’s hilarious when Captain Sandy asks where the chef is…it’s like she FORGOT she FIRED him the night before.

The captain heads to Kiko’s bunk and Kiko legit looks like he might punch the captain in her face during her lame “leave your emotions in the cabin” pep talk. Maybe Captain Sandy should take her own advice instead of taking out HER emotions on her crew.

Kiko is so beaten down and emotionally drained that he is having a tough time pulling together this breakfast. It doesn’t help when Bugsy pretends to compliment Kiko’s food the way one would compliment a three-year old’s finger painting. I hope he gives Bugsy food poisoning with his last hurrah meal. Bugsy and Malia are nothing but sneaky girls. Malia whispering about Hannah’s panic attack to Captain Sandy was uncalled for. There was a reason Malia was whispering, amiright? Such a manipulator…

Later, it’s time for the guests to go on a trip. Hannah does a fine job of pairing up the crew-couples, and today, Rob and Jessica are the chosen ones to lead the guests on their excursion. Hannah sends the guests off and it doesn’t take long for Captain Sandy to call for Hannah so that they can have a little chat about the current situation onboard.

Regarding Kiko, Captain Sandy claims, “I wanna try and lift him back up.” Suuuuure you do, Sandy. What’s with Captain Sandy’s attempt at being softer with her lowered voice? No one is buying it, Captain, and Hannah for SURE is not going to come talk to you about any issues she may have, be it personal or with the crew. The captain has made herself so unapproachable this season!

The guests catch on pretty quickly that Rob and Jess are a thing. What could have ever tipped them off? Perhaps the constant face sucking and flirtation? The guests come up with a killer ship name for the duo: “Job.” Jess claims this is the only “Job” she ever liked. As they smooch throughout the trip, I can’t help but wonder if that’s actually allowed… During a quiet moment as the guests are busy dining, Rob drops an unrequited “I love you” into Jess’s ear. It is terribly awkward not hearing Jess say it back to Rob, but not as awkward as Malia’s rap for ’90s night on the yacht. Speaking of Malia, it was cute of her to slide in the fact that her chef boyfriend, Tom, who is coming to visit, said he would NEVER cook for a yacht that big again. Riiiiiiiiight.

Back on the boat, it’s water toy time. I am really hoping that Malia won’t have to make any epic saves on this charter. Eye roll. However, since the seas are a bit choppy, maybe Rob should be more concerned with the guest flying through the air on the jet ski, instead of finding out if Jess will ever say “I love you” back to him. No one cares about your relationship. #SaveKiko.

Kiko is planning on cooking his heart out for his last meal on board. As he preps for dinner, Captain Sandy finds Pete and Alex and asks them to go get pizzas for the crew food. The captain probably asked the boys to do this because she is terrified Kiko may poison her if she asks him to cook for her. HA. On top of pizzas, Hannah asks Pete to find her a patisserie as one of the guests wishes to present his wife with a ring on a piece of cake. “What is a patisserie, where you get flowers?” OMG, Pete.

As the night goes on, Captain Sandy is still LURKING in the galley, raising Kiko’s nerves. He does his best to ignore her (bravo) and instead focuses on his dinner. Bugsy is embracing the ’90s night hardcore. In honor of the event, she added MORE hair clips to her head. Less is more, Bugs…

Say prayers that Kiko knocks his final cook out of the park. Hey, if all else fails and the captain can’t find a chef, she could just cook for everyone because she very CLEARLY LOVES being in the galley… Thankfully, Kiko’s food is welcomed with love, so much so that the guests ask him to come out for an applause. SOOO happy Captain Sandy is there to see it. I still wish Hannah would come clean about her Vegas food involvement, but alas, I think that ship has sailed.

Oh jeez…this Wellington rap performance is cringeworthy. Bugsy is acting like this is the proudest moment of her life and Hannah just looks like she wants to jump off the highest deck of the yacht.

In the morning, it’s time for Kiko’s final farewell. The guy takes the high road and preps breakfast before his departure. A true gentleman. Too bad Jess is a complete bozo and will probably sabotage Kiko’s final morning by not writing down the guests’ orders…sigh.

The head charter hands over a fat tip envelope to the captain, but Kiko isn’t going to stick around for the tip meeting. He doesn’t wanna hear what Sandy has to say about him and makes Hannah promise to send his tip to him. They have an emotional farewell and their friendship is one for the books. I never saw Hannah be as soft as she was with Kiko. It was a beautiful thing and Kiko will be greatly missed. So not looking forward to yet another replacement on the Wellington…