RHOBH Recap: Denise Claims Brandi Slept With Other Cast Members, Gets Shut Down by Rinna 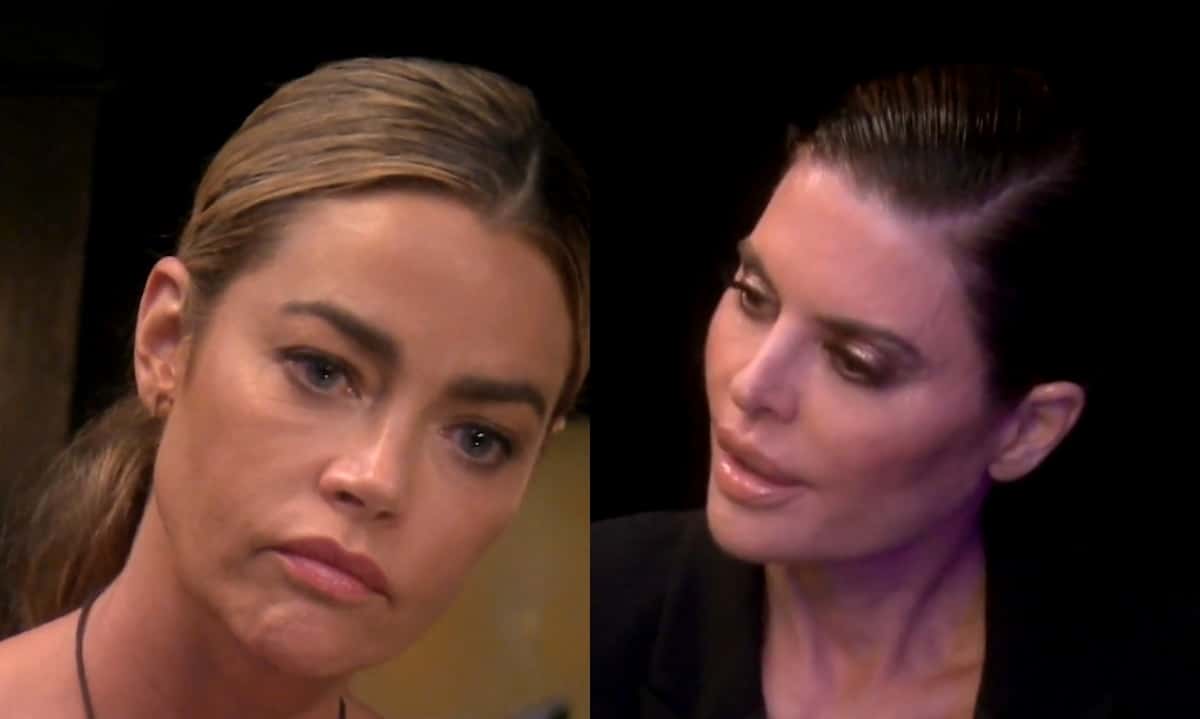 On this episode of the Real Housewives of Beverly Hills. Denise wants her truth told and isn’t going down without a fight…

A mere thirty minutes after dinner, and the mean girls have gathered in Kyle’s suite. I am confused as to why Denise’s sex life is any of anyone’s business, but I digress. As the witches feign that nobody cares if Denise really slept with Brandi or not, I so wish I was in Garcelle‘s suite. Garcelle and Dorit are hearing Denise’s side of the story. Denise calls these allegations slander, but leave it to Garcelle to keep things real. She makes sure to ask if Denise has any text messages that could be leaked and potentially dismantle her denial. Denise once again denies, denies, denies, and TBH, I wouldn’t blame Denise if she bounces the next morning.

In the morning, Sutton drops off some bedazzled Hunter boots to Kyle (WTF) and Kyle attempts to talk smack with Sutton. Kyle mentions that “Brandi Glanville… she doesn’t talk…” (WHAT??), but Sutton isn’t playing into the sh*t talking that Kyle so loves to do.

LOL to Rinna phoning Denise. How awkward are those ladies who at one time considered themselves friends?! Rinna heads down to discuss the shenanigans and slander that occurred the night before. Denise cannot fathom how Rinna wouldn’t give her a heads up about the situation brewing.

Denise wants to know why Rinna kept egging Teddi on to say that she slept with Brandi, and Rinna just plays dumb, her favorite hobby and interest. They go back and forth, Rinna attempts to look innocent, and Denise shuts down rumors of an open marriage and cheating. Denise then goes on to explain that she doesn’t even talk to Brandi all of the time. Rinna, being Rinna, is PUSHING for Denise to call Brandi cuz we all know how much Rinna likes to be involved, but not toooo involved, but involved enough to safely back away after grabbing some juicy information, amiright? In the end, Denise realizes that Rinna is no friend of hers…

Teddi is resting for the day (she must be soooo tired from all of that sh*t stirring the night before) so Kyle is off to fight her fight with Dorit solo. I almost forgot that Kyle and Dorit are in the middle of something, too. The ladies find a place to grab a bite and to hash out their issues. Dorit is annoyed that Kyle always cuts her off. The funny thing is, Kyle is interrupting Dorit as Dorit explains her issues. Hilar. Dorit believes that Kyle takes advantage of her friendship with her and it’s true. If you’re not doing Kyle’s dirty work, she has no interest in you.

Kyle rambles about how she gets “so tortured and upset” over friend issues (yea riiiiiight) and eventually, Kyle apologizes to Dorit and the ladies decide to shut down their problems of recent. Since they are no longer in a fake fight, Dorit switches the topic to Denise and Brandi. Dorit suggests, “Maybe Brandi is doing this for attention?” I LOLed when Kyle said Brandi doesn’t make sh*t up. I hate when Kyle has amnesia. Did she simply forget that she called Brandi a liar when Brandi claimed Mauricio was a cheater?

Back at the hotel, Garcelle appears to be the only one with a heart here. She hugs Denise like she means it. THAT’S a true friend (take notes, Rinna). Garcelle manages to drag Denise out of her hotel room, because really, if Denise can deal with Charlie Sheen, she can handle these b*tches. Plus, it’s a day of fun. There are Ferraris and they will be wine tasting, and as long as Kyle and Teddi aren’t there, Denise is down. In the words of Erika, “Can you get any more Italian than Ferrari?! Italian men, food, and cars. Very simple for me.” Interesting, Erika. Your hubby doesn’t look like he fits that bill…

After smoothing things over, Dorit and Kyle meet up with Sutton at Dolce and Gabbana. Sutton is such a hooked-up individual: Dolce closed the store for them and set up a private try-on area JUST for Sutton. What a life. Kyle and Dorit are green with envy as Sutton gets the royal treatment and they all play around with the tiaras (a jab at LVP, perhaps?).

The cool crew, I mean car crew, begins their descent into the wine cellar and prep for their tasting. This looks like heaven. I feel Garcelle when she suggests the women just maintain the small groups. Somehow they get along much better that way…plus, with Teddi out of the equation, everything is oddly…calm.

After lots of wine tasting, Garcelle comes out and says she can’t get over how Denise is acting like nothing happened the night before. Denise remains cool and explains that she is one to tuck emotions away, but that it is hard to do because some of the women act “like they want that chaos around them.” Notice how Denise looks right at Rinna when she makes that claim. Rinna nods knowingly and Erika explains that all of the women are capable of defending themselves because they are all grown-ups.

Denise takes this comment as an opportunity to talk to Erika about her feelings on Aaron. Erika gives some BS explanation that men handle situations differently, but that any issue Erika has with Aaron, she luckily doesn’t take that out on Denise. PHEW. Denise promises that she will have Aaron apologize to the women and she feels as though knocking one problem with these ladies out of the way is a win.

Why is Kyle uncomfortable and nervous about dinner? The wine tasting crew has made it very clear that good times can be had, but of course, Kyle has to highlight the issues. Everyone awkwardly stands around in their glam and Dorit is 40 minutes late. Naturally, Kyle HATES on her, but not to her face. Kyle is so p*ssed she could never be as fashionable as Dorit. Anyone else kinda think that Erika looks like Dorit’s tired, old sister? Matching hairdos…those fashionistas have to let each other know next time so as not to have duplicate lewks.

More of Sutton please. Hearing her talk about her dressing melt-down reminded me that although she has all the money in the world, even SHE has problems. The convo at the start of dinner is light. They talk about Rinna’s Instagram dancing and I can’t help but applaud Garcelle in her confessional for pointing out that perhaps Rinna shouldn’t be dancing nearly naked when her daughter with body issues can see it.

WHY DOES TEDDI HAVE A PROBLEM WITH EVERYTHING? She can’t get over Denise trying to make things better with the women by saying Aaron “can apologize after trying to diffuse the situation and move on from it.” Teddi believes Aaron is full of it, but that’s an weird statement coming from the woman who is so full of it, she forgot what *it* is at this point. Why does Teddi hate Denise so much?? Teddi keeps trying to pretend that she is upset about what she THINKS Denise is saying about her behind her back.

Kyle spins the direction of the chat back to Denise, and so begins round II of the disastrous Roman dinners. Denise states that she is “not nervous. Just at times, I’ve felt unwelcomed.” I bet Denise is wishing she could have found a flight back to the States. This dinner is painful. Denise is asking for a line to be drawn and Garcelle suggests they all just move on.

The cold, hard truth is that Denise appears to be a bit confused on the information she is saying to the women. The night before, Denise was claiming that she hadn’t spoke to Brandi, but now she talked to Brandi before Kyle’s party? If you’re gonna be a liar, at least be a good one, Denise…

Denise explains matter of factly that when she spoke to Brandi before Kyle’s party, Brandi knew everything that was going on in the group…personal things. When everyone’s eyes dart around trying to figure out the inside source, I can’t help but think, couldn’t it just be that Kyle tells Kim everything and then Kim tells Brandi? According to Denise, Brandi shared a lot of personal stuff that Denise says she will not repeat to the group (aka — she has got some dirt). After much prodding, Denise repeats what Brandi told her: Brandi slept with someone else at the table…and that it is between Kyle and Rinna.

“Don’t say that!” Rinna fired back as she pointed at Denise. “Don’t even put that out there!”

It is sooo ironic that Rinna is getting mad that Denise is hinting that she heard she slept with Brandi. Denise is trying to prove that Brandi is alleging things left and right, so it is best they all do not believe the things coming out of Brandi’s mouth. If only it were that easy…