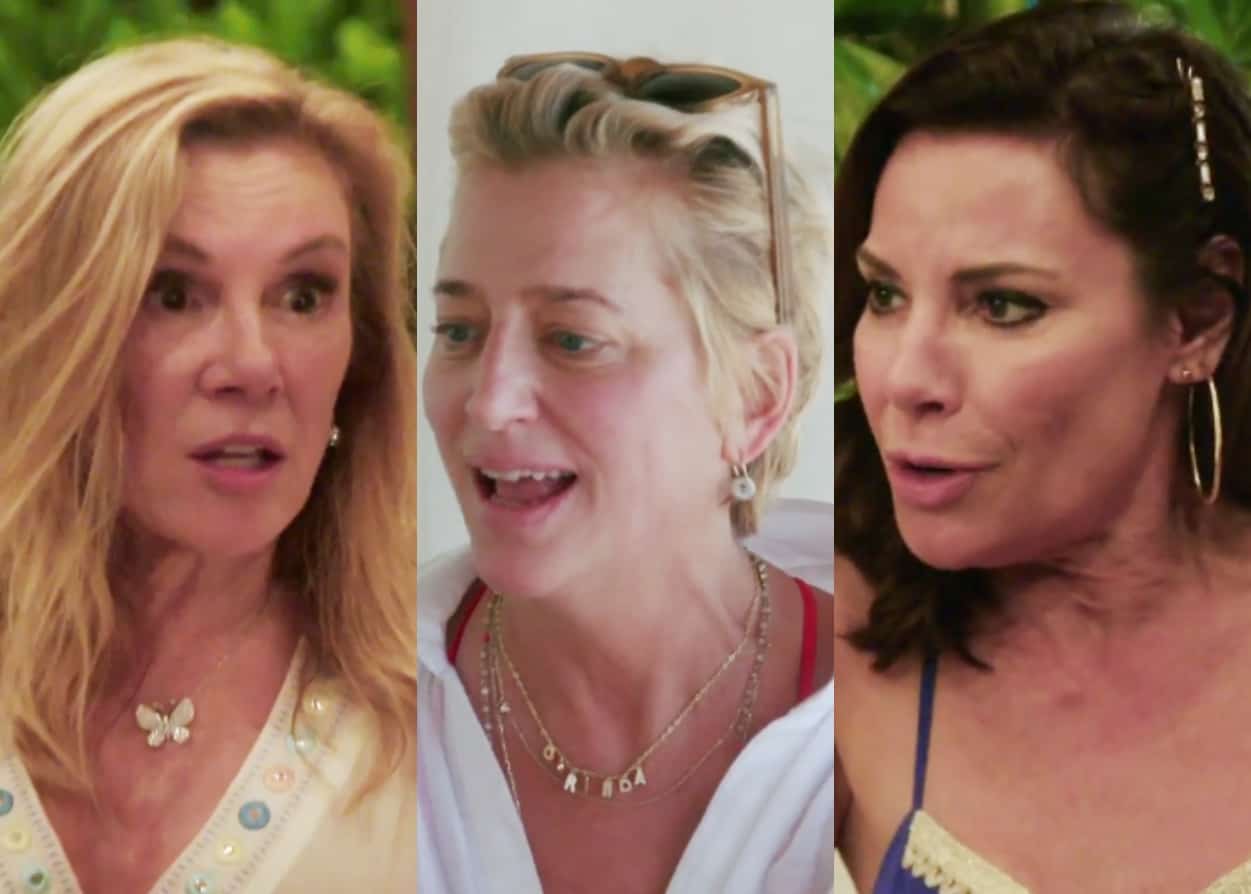 This week on the Real Housewives of New York City, we are still in Mexico, and it’s their 200th episode? Wow, time has flown with this franchise! Let’s grab a cocktail since we are in Mexico living vicariously through RHONY and pick up where we left off last week!

Sonja shares that Ramona has been upset with Leah since she dressed very suggestively and was exposing her vagina at her party. Leah isn’t owning that she did do some dirty dancing. Just own it, Leah, you were acting out, and don’t flatter yourself. Ramona doesn’t want your vagina in her mouth. She doesn’t even want the word vagina coming out of her mouth let alone inside it!

Dorinda follows Ramona outside to confront her. Ramona calls her a drunk. Dorinda feels like Ramona is on attack mode with her. Ramona wants Sonja and Dorinda to get 2-for-1 memberships for AA.

When Luann gets wind of this conversation, she won’t touch the AA topic with a ten-foot pole when Ramona asks her opinion. Dorinda asks if she appears drunk. She then proceeds to request another drink.

Ramona shares with Luann that she has to drink water to set an example for the other girls. She had to let Dorinda know that she has a drinking issue #TRUTH. Ramona claims she has limited her drinking since Sonja, Dorinda, and Leah have drinking problems. She thinks she and Luann are the most normal in this group. Luann, in her ITM, doesn’t feel that Ramona can claim anything remotely close to normal. That is a true statement for all of them frankly! I do agree with Ramona that Dorinda has serious rage and drinking issues and it was time for a real friend to speak up.

In another room, Dorinda is crying to Leah that Ramona really hurt her feelings. Ramona suggested she needs AA, and Dorinda is offended and she feels attacked. Leah thinks Dorinda should just ignore her instead of trying to get her to see what was behind the comment. She wants her to perfect the tactic of deny and deflect. Sometimes the truth hurts and her behavior this season has proven that there is a serious issue.

Side note: There is a lot of finger-pointing on who is the biggest drunk in the group. Hint: There is a tie between a few of them and that title can change day-to-day.

Leah is talking with Dorinda and she feels that Ramona crossed a line regarding her bipolar diagnosis. Luann comes inside and is trying to comfort Dorinda over what Ramona has said. Dorinda is more upset that Ramona doesn’t put Lu in the alcoholic category that needs an AA group. She doesn’t like to shame others, according to her. Dorinda’s words prove otherwise. Dorinda trashes Ramona’s behavior and declares that anything happening after midnight is f*cking and finding? Wow, I think you have to find it first and then f*ck it!

In the morning, Dorinda goes into Leah’s room to discuss the drinking conversation. Leah, who claims to be the only relatively sober one, notices Dorinda has a different spin on what was said. Dorinda claims she had three wine spritzers ? No surprise there, things are seen very differently in an alcoholic haze.

Ramona finds out Sonja took water pills and that is why she was acting all wacky the night before. Hmm, I have heard excuses for drunken behavior but that’s a new one.

Leah and Luann are working out together. I admire their endurance. I wouldn’t even attempt this after a night of drinking. Leah is probably imagining Ramona’s face on that punching bag.

Luann goes into the kitchen and it is like Groundhog Day — Ramona and Sonja act like they are fresh as a daisy? They discuss Dorinda’s drinking and rage issues.

Ramona approaches Leah and wants to have a private conversation. FINALLY. She thinks Leah is a work in progress. Leah just wants to understand where the anger came from. Ramona, I am shocked you recognized that you just can’t change someone if they aren’t amenable. Progress, I think.

Sonja claims the water pills caused something called Drunken Sailor Syndrome. Who knew? I swear the weirdest stuff happens to her. All of the ladies agree to a reset today — again, let’s see how long that reset button holds! Camel rides, beach, and lunch sound fantastic. Let’s see how they can screw that up!

Luann is having PTSD over riding a camel again. We get to see the flashback of poor Lu on a bucking camel. I can’t watch that clip without cracking up, especially in slow motion. That is a classic Lu moment along with the falling in the bushes. Perfection!

Leah isn’t feeling this excursion either and she is already sporting her very own camel toe. I am sorry but I really feel for the poor camels. They have to listen to all of these women screeching and cackling. Leah wants her camel sedated. I am sure the feeling is mutual! We then have Sonja schooling Ramona on no more macramé! Amen, sister.

Dorinda isn’t threatened by a camel. She has ridden a few beasts in her life and married them too? We know Richard wasn’t in that category. She might have been suggesting she was the beauty to John’s beast, perhaps?

Sonja is dreading it and thinks her camel is a little feisty. Are we going to have another bucking situation? Yes, we are, Sonja is bailing on this activity and then Leah jumps off her moving camel. That was pretty reckless — you could have been trampled. Ramona wants to be the photographer and not ride a camel. She was traumatized over what happened to Luann when she was almost tossed in the desert.

Luann is actually enjoying riding on the hump of her camel. I guess it has been a while for the Countess so she has to take it when she can get it #goals.

They get to have lunch in this little wooden hut on the beach. The spread looks fabulous and the view is gorgeous. Ladies, please don’t ruin this beautiful scene with another fight.

Luann and Dorinda go into one of the cabanas to chat about last night. Dorinda is still shooting Lu, the messenger, since she shared what Ramona said about her drinking. She keeps throwing Luann’s arrest in her face. Not nice, Dorinda. They make a pact to stop bringing this stuff up.

Luann decides to join a bunch of guys playing volleyball. She claims she is a good player as she gets hit in the face. LOL, she finally gets her groove on and redeems herself. While Ramona watches, she is doing this twisting victory dance. She reminds me of Elaine from Seinfeld when she dances.

We are out on the town in Mexico. They have planned to make it all about Sonja and her birthday. Sonja loves that they made this special for her. I love the waiter balancing the tequila bottle on his head while he is carrying a tray of drinks. He has mad skills! Lu decides to break it down with the waiter that is literally the same height as her pus*y. Now that might not be a bad thing and be very strategic placing for Lu later in the evening.

Wow! The waiter is now balancing multiple margaritas on his head! This looks like a really fun place. Luann is checking the local men out at the restaurant. She is on a man hunt! I guess that camel must have primed her pump. Luann, aka King Kong, should scoop up the waiter in a to-go box for a late-night snack. He is at the right height, and he can serve you margaritas at the same time right off his head!

Ramona and Leah bond on the issue of relationships. If they can’t find their equals they aren’t interested in settling. Leah is proud of Ramona forgiving Mario when he cheated. So are these two good for now?

Luann and Dorinda go into the restaurant bathroom for another surprise. The Countess Luann comes out in a sombrero with a boom box singing “Happy Birthday” to Sonja.  She will never miss an opportunity to perform! Dorinda looks like Chiquita banana and motorboats Sonja. The violin player is side-eyeing this and it is pricele$$. I am glad they are having fun and a few laughs.

When Leah keeps talking about her vagina, Ramona walks away — she is a good Catholic girl, y’all. I have to agree with Ramona on that one, I hate that word too! Ramona decides to Ramonacize her and ignore her racy comments. At least they end the evening laughing!

Next week, we are still in Mexico chasing guys, and Leah catches one! We are still battling the drinking demons too and Montezuma’s revenge! Can’t wait for the reunion for this season, it should be pretty contentious! Have a wonderful weekend, everyone!