RHOBH Finale Recap: Lisa Rinna Confronts Denise Over Cease and Desist as Denise is a No-Show at Dorit’s Housewarming Party 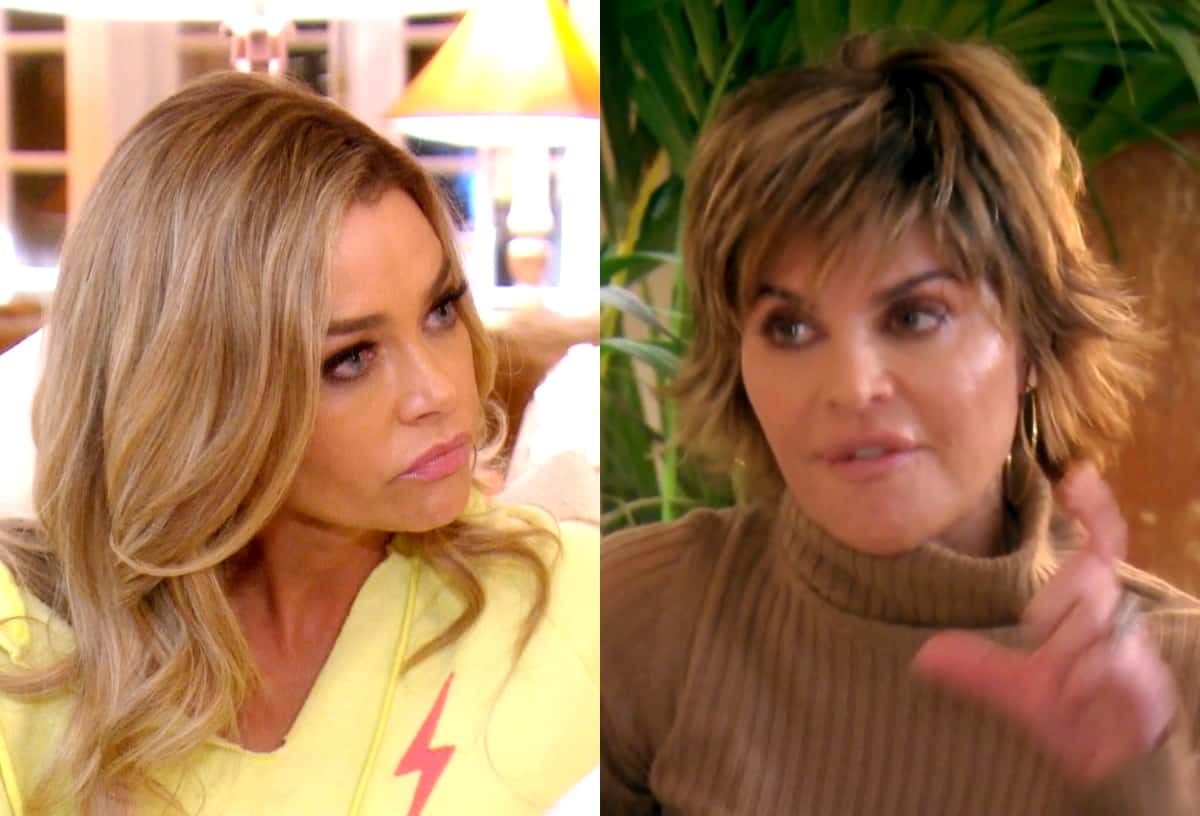 Denise deserves a slow clap and a medal for this finale because she must be exhausted from carrying this season of the Real Housewives of Beverly Hills.

The suspense is building leading up to Saturday, Dorit’s housewarming party. The women go through their regular schedules: Kyle is kissing Sutton’s a*s because Sutton allowed Kyle’s muumuu line into her boutique (what is Sutton thinking?) and Garcelle is just prepping to begin producing her own movie. NBD.

As Saturday gets closer, there is excitement in the air. Cue eye roll. Dorit talks about a full bar and of a magician at the party, because what’s a Dorit party without a performer? Perhaps Dorit should tell the magician to work his magic and smooth over the issues within this group of ladies. We would know if the magician is legit or not within five seconds!

Nothing is better than Dorit having girl talk with PK. He pretends to listen to Dorit and interrupts her because Dorit tells the world’s longest stories. Between PK and Kyle, it seems like Dorit gets interrupted an awful lot. I’m here for PK saying he has no interest in getting involved in all this BS.

On Friday, Rinna and Teddi FaceTime Erika. Erika is busy in NY and clearly cannot attend Dorit’s party tomorrow. This leads to Rinna and Teddi questioning if Denise will be at the party. Rinna believes that Denise brought this drama upon herself and that Denise should man up and show up. According to Rinna, “You made your bed, now you have to sleep in it, even if that bed is full of nails and snakes.” Interesting that those words came out of Rinna’s mouth. I mean, she helped stir up alllll of the drama and is QUEEN of deflecting problems onto others.

It’s the day of Dorit’s party and everyone is glamming it up. We are talking wigs, weaves, and wack outfits. Dorit is obviously dressed to the nines and could not possibly fit another clip on her head, but she does look pretty fierce. She clearly did not hold back for this event. I mean, WHO HIRES A PYRO FOR A PARTY? How much money does one need to have to be able to do that?!

Leave it to Dorit to plan a two for one party: PK has launched a non-alcoholic champagne (what’s the point?) and is promoing this during their event. The only one who may actually enjoy that beverage is Teddi, and at this point, who even cares?

So excited to see Adrienne and so confused to see Sutton wearing of dress full of lacy plates? I wish I knew fashion better, as I am sure that is a bazillion dollar number. Too bad it’s lost on most viewers.

Garcelle is a BRAVE woman for bringing her new man into this lion’s den. It is a bold move, but I guess she figures any sort of distraction at an event like this is welcomed. Garcelle waits, and waits, and waits on Denise, who said earlier that she would go to the party with Garcelle. It is frustrating for Garcelle to keep getting Denise’s voicemail when they had made a plan to travel together, especially because Garcelle is a true friend to Denise.

While Garcelle sits around for Denise, she is really amping up the heat with Chocolate Michael, huh? The conversation goes from chicken wings to diamonds. The lady knows what she wants. BUT — she also wants to find out where Denise is. Denise is a no show and it is baffling that she would leave Garcelle hanging when she was the one who has had her back the whole time. Garcelle is patient but annoyed, as any friend would be. Garcelle essentially got stood up by Denise! Rude.

Meanwhile, at the party, Dorit introduces the “world renown illusionist and mentalist,” and after the guests ooh and ah over the tricks, Garcelle walks in, sans Denise. Garcelle is having a hard time defending Denise because she feels hurt and confused about her no-show approach. Denise should know that Garcelle is a safe friend — if Denise didn’t want to go at the last minute, then she could most def share the truth with Garcelle! OF COURSE Rinna has the hardest time understanding where Denise is. I love how Teddi says she knew this was gonna happen. Garcelle retorts that Denise, “stood me up. It’s not okay. Just at least say something.” Not a good look, Denise. Dorit is worried, as Denise’s phone appears to be shut off, and Rinna *pretends* to be worried because #cameratime. 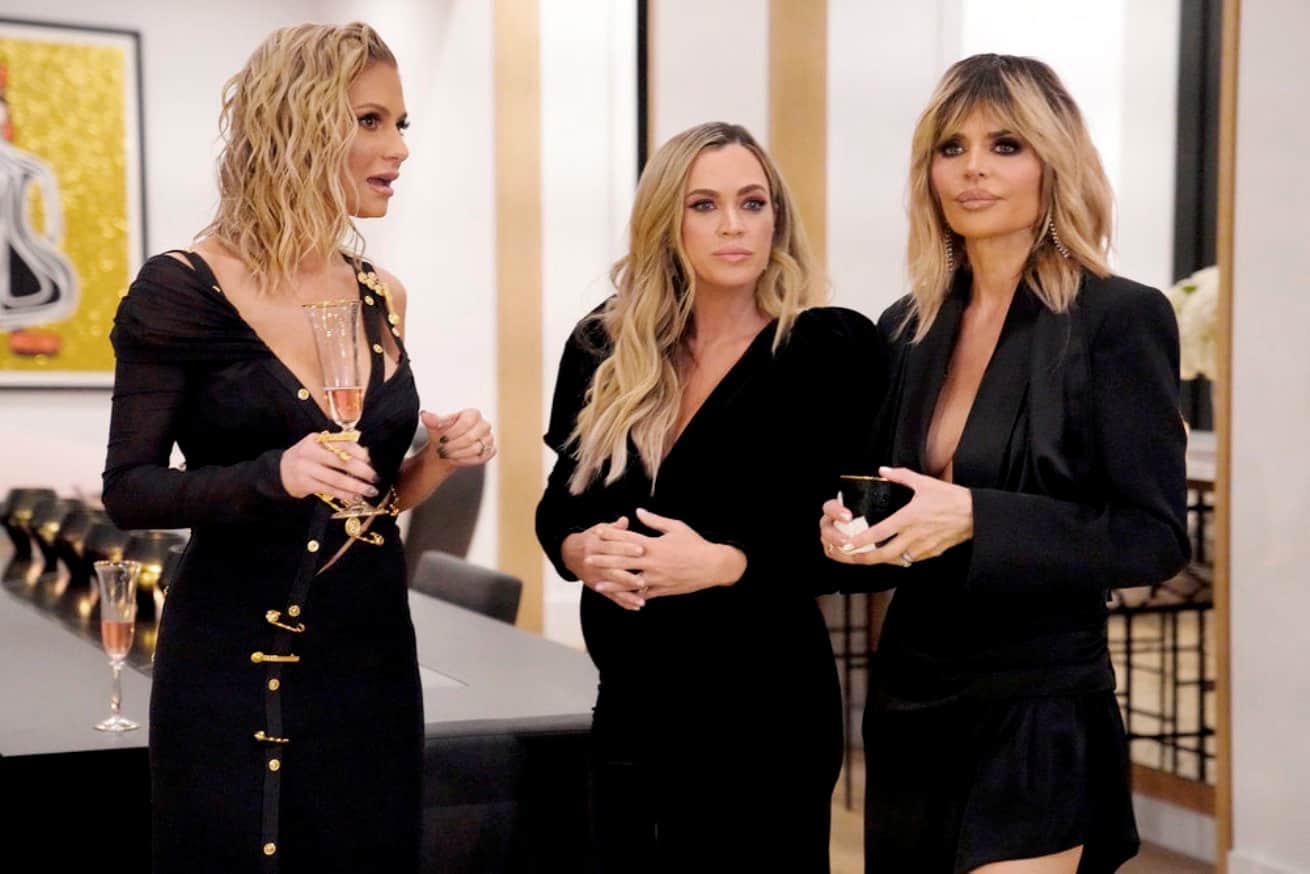 Whilst on the sofa, Dorit shares that she received a call from Camille out of the blue…which leads Rinna to report that Denise actually reached out to Camille a few days ago. According to Rinna, Camille is easily manipulated and Denise needed an ally, so BAM — an alliance has been formed.

The convo gets derailed once Garcelle catches a glimpse of Brandi walking into the party. Dorit didn’t invite her so WTF is Brandi doing here? I love how everyone looks right at Kyle when Brandi enters. Kyle is a terrible actress, as is her mini-me, Teddi. They both try to play off the fact that you KNOW this was an attempt of a set-up to catch Denise off guard. Too bad Denise is already one step ahead of these women…

Turns out that Kim brought Brandi as her plus one. HOW CONVENIENT. Brandi’s face falls (well as much as it can) when she finds out that Denise is not at the party. We come to find out that Brandi sent Denise a text telling Denise she will see her at the party. This is clearly why Denise bowed out of the event. She didn’t want to have to confront Brandi! Brandi bashes Denise by saying, “First you make me into a cheater, then you make me into a liar.”

A few minutes later, we come to find out that Aaron texted production saying Denise had a family emergency. Garcelle isn’t buying it, and you know things have gone bad when your own friend is questioning your every move.

The next day, the world’s weirdest trio meet for some drinks. Garcelle, Rinna, and Dorit try to understand where Denise was coming from with the no-show move, but everyone is legit baffled by her actions. Garcelle shares the truths of Denise because she is starting to get frustrated with her friend. Denise told production there was a family emergency, but that wasn’t actually the case. Rinna cannot fathom why Denise didn’t reach out to her the night of the party, but it’s because Rinna isn’t actually a true friend.

Take, for instance, the way Rinna calls out Denise’s “sympathy post” the day after Dorit’s party. Rinna believes that the post-surgery post was calculated and that Denise is capable of manipulating the media. Rinna is talking mad sh*t about Denise so it’s no wonder that Denise sent cease and desist letters to her castmates.

BUT, two weeks later, Denise has decided to chat with Rinna in person. Rinna is so selfish making this whole meeting about herself. What else is new? She tells Denise to come with an open heart and open mind. I die when Denise tells Rinna she isn’t coming for a therapy session. It’s the most awkward and cringeworthy introductory exchange. Denise states that she said she had a “family emergency” because she found out that Brandi would be at the party. Rinna’s claim that she was worried about Denise is a huge joke. She talked trash about Denise all night. Denise calls bullsh*t that Rinna didn’t know Brandi was going to the party.

Rinna then calls Denise a liar and states that she doesn’t know exactly what to believe when it comes to Denise anymore. Denise is denying the text messages and the friendship with Brandi, and Rinna says her famous line…“This is none of my f*cking business, by the way,” BUT LET ME PROCEED TO ASK YOU A MILLION QUESTIONS. That is Rinna’s MO, huh?

Denise is doing her best to control the situation and is attempting to not have “the outside noise” affect her family. At the end of the day, Rinna believes that they are at a dead-end in their friendship and lies through her teeth when she says she is there for Denise.

God, I love Sutton. I hope she comes back with a diamond for next season. She flies the ladies, minus Garcelle and Denise, out to see Erika on Broadway. Having the ladies start and end the season in New York City is very full circle. Too bad there was zero growth during that time period.

The end of the season always finishes with an update on the women. Erika’s Broadway show was a hit until it was shut down two months later due to COVID-19. You know she is p*ssed she actually has to spend time with her hubby now that, like, everything is closed.

Garcelle is on the hunt for a new man and I am hoping she finds a good one. She certainly deserves it.

“I’m honest and I don’t like to let things fester.” OKAY, TEDDI. Some accountability coach you are, girl. But, your baby is cute, so congrats on that!

Denise is filming the Bold and the Beautiful and probably walking around with her head up high because that show is actually filming so she is actually working, as opposed to these other women…

Rinna is still doing her Instagram dancing and certainly messing with her daughter’s self-esteem. She is also still lying when she calls herself a “truth seeker” so there’s that.

And Dorit had a season. Despite her Capri room shutting down due to COVID, she is thriving. I mean, OMG. How cute is her daughter, Phoenix, and her cooking show?! Can Phoneix join the show full-time and bump out one of these drama queens? Sigh. We can only dream…

TELL US – WHAT ARE YOUR THOUGHTS ON THE RHOBH SEASON FINALE EPISODE?