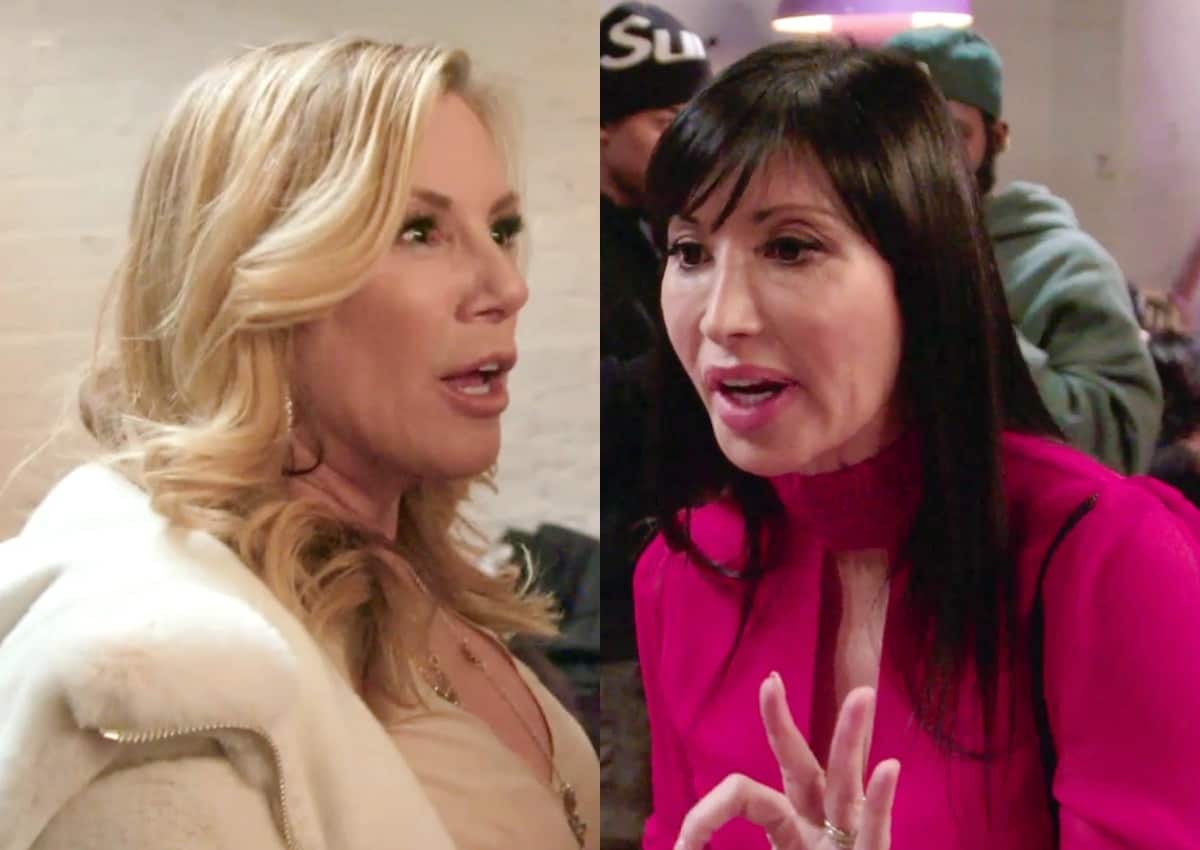 This week on the Real Housewives of New York City, we will celebrate yet another RHONY birthday along with an ex-boyfriend thrown in for good measure. Leah will also invite us all into her Married to the Mob anniversary party. I will talk later in the recap about the Dorinda news. Let’s see what they are up to this week!

Leah is highly anticipating her big party to celebrate the 15-year anniversary for Married to the Mob. She addresses her sister on the phone by saying, “Hey sl*t.” How sweet, NOT! She is worried Bunny is going to be monitoring her with a breathalyzer. Leah wants to slip something in her mom’s drink to soften her up a little. I would strongly advise against that!

Dorinda calls Luann to make sure that Luann got her invite to her birthday party on Friday the 13th. She tells her to bring her singing voice. We all know she will NEVER forget to bring that! Dorinda then needs a nap in front of her pink Christmas tree. Ms. Medley will have plenty of time for naps in her future.

Sonja is actually going to sell her townhouse. It is about time! She feels since she finally launched her line at Century 21 she can unload that heavy burden. Sonja better get moving on that before it is underwater in sewage or the bank takes it.

Luann comes to Ramona’s apartment and they discuss Dorinda on the Mexico trip. Luann hates that nothing really got resolved between them. She feels sucker punched. They think Dorinda feels that she apologized and things should just be forgiven.

Ramona and Luann discuss Elyse. Leah invited Elyse to her Mob party. Ramona feels that Elyse is just not a girl’s girl. Ramona feels like she was essentially used by Elyse to get into her friend circle #truth. She claims she can be manipulative and not genuine. Ramona should be able to identify those traits in others for sure! Luann agrees with Ramona that she felt something was off with her and never got close to her. She had her number and it wasn’t the 212 area code either!

We are now attending the Married to the Mob party. Leah is concerned that the housewives are going to expect a fancy party with caviar. Dorinda, in her fur coat, thinks it is a hip-hop event in a dungeon where the attire of the night is pajamas. She seems to be confused with the streetwear brand. Dorinda is convinced the guests need to go home and change out of their PJs.

Elyse arrives at the party and looks for a coat check. These housewives are so snooty! Elyse shares that she had a missed call from Ramona who we know is disgusted by her. Leah shares that Ramona told her to not invite Elyse. Doesn’t Ramona know that Leah is like a spiteful child who will do the opposite?

Dorinda meets Bunny who is very similar to her church-going mom. Luann shows up in another fur coat. It is amusing that the other women think that Bunny is so vanilla compared to Leah. Luann thinks she is so granola and Mother Earth. I agree there is a major juxtaposition between mother and daughter.

Sonja has arrived and is already hitting on men. She is telling them to not be scared; “I don’t bite!” The guys she is chatting with tell her they see her as a grandma. LOL! That will give you a reality check for sure.

Ramona has arrived and she meets Bunny and tells her she feels like they are kindred spirits. They both try to control Leah and guide her. Bunny thinks they need to have a conversation and get to know each other better.

When Elyse tried to say hello to Ramona, she jerks her hand away and pretends to not even know her. Ramona calls Elyse an evil girl. I don’t know about you guys, but I feel like part of this storyline has been left out. I don’t get the anger between them. Ramona, the defector, is literally running away from Elyse. How bizarre and rather childish is this? Leah yells for her to “please stay.” It is pretty funny to see Ramona ask someone for her car and she has to walk away in her version of streetwear chic look.

Sonja is enjoying the eclectic vibe of this group. She feels like she has landed her helicopter on a hot guy helipad. Sonja tells one of the party-goers you are having Captain Morgan with Lady Morgan. I am sure that he is not impressed and has no idea who she is! She should have shared she partied with Diddy on his yacht!

Leah, who started the brand at 22, thanks everyone for coming and sharing this night with her. She recognizes Rob, which is very sweet. Leah also thanks her sister Sarah and gives her 15% of her shares. She must be drunk since she did that. Sarah might want to confirm that since Leah said that proclamation wasn’t binding according to her lawyer.

Bunny tells Leah that she is very proud of her. She is delighted that her daughter followed her dreams and made it a success. Leah is enjoying this moment with her mom. I find it refreshing that the night ends very happily. Who would have thought that an edgy group of people had better behavior than a group of socialites?

Luann talks with Ramona the next day about why she left. She wanted to escape the negative energy of Elyse and didn’t appreciate her grabbing her arm. Ramona doesn’t want anything to do with Elyse.

Luann is writing a book and is meeting with a ghostwriter to discuss her story. The writer is surprised by the woman Luann is today. Luann was considered chubby and had to shop at Payless. She used to saw off her heels since she was taller than others. Luann then realizes Ramona is still on her phone since she can’t figure out how to hang up the FaceTime call. Yikes! Just hang it up, Ramona!

Luann shares her dad apparently had a bad drinking problem and coincidentally was arrested as well. It is always interesting to see how people’s lives parallel to their parents. Luann shares that she was very close to her dad and she can now truly understand his struggles with alcohol. She credits AA for saving his life. Luann looks like her dad and loves reminiscing about him. She is hoping for another housewife New York Times Best Seller! Luann might get that wish!

Dorinda is having her birthday party at the Russian Samovar restaurant. She shares with her sister, Melinda, that she invited John to her dinner when she saw him in church. Dorinda thinks it would be cruel and unkind to not invite him. When did that ever stop her before?

We join Dorinda’s birthday dinner at the Russian Samovar, which is known for its flavored vodka. This sounds like my kind of place! Hannah is wearing an ugly sparkly afghan-looking jacket. What was she thinking? She is definitely channeling her mom’s pants from the last episode. Lu and Sonja are delighted the party is raining handsome men!

Sonja is inviting everyone to a drag queen Bingo party. She will be raising money for LGBTQ . Leah inquires, does she need to bring a drag queen with her? No, you don’t have to BYODQ! Sonja just wants her to fly her freak flag! That is no problem with Miss Leah!

When Sonja’s phone is messed up at the table, Dorinda tries to help her and it pisses Luann off. Luann is policing the cellphone usage after Dorinda placed a no call moratorium at the table. Come on now, Lu, it is her party and if she wants to be on the phone it is her prerogative. Gosh, do I hate being on Dorinda’s side. It is her party and she will phone if she wants to! Ramona is chatting with the poor guy next to her and she is venting over the birthday girl. I am distracted momentarily when the camera pans to Hannah with her fire-engine red lipstick and chomping away on her food. Yuck.

Luann again finds a mic, and she decides to do a toast after John gives a very sincere toast. Let’s just say it is a bit rambling and I did detect some slurring. Luann tends to make the toast more about herself than Dorinda. You have got to love the Countess! She always knows how to shift the narrative when it suits her! Ramona can’t take it anymore and tries to grab the mic but Luann isn’t done yet! Luann goes into this throaty jazzy version of “Happy birthday to you” that is beyond hilarious. It is funny when Dorinda in her ITM says she performs like an SNL skit. The evening ends on a happy note with Dorinda and John, who needed a shot after sitting next to Ramona, dancing.

Next week is the season finale of RHONY, and we are at Marry, F*ck, Kill show and the Drag Queen Bingo party!

I can’t finish my recap without mentioning Dorinda’s resignation/termination from RHONY. Was Dorinda not so nice behind the scenes as well as on camera? I was surprised since I thought Andy Cohen was rather attached to Ms. Medley! It appears Dorinda wasn’t really apologetic at the reunion so she got her walking papers CLIPPED. I would love to hear all of your thoughts on this news! Be well and have a great weekend!