RHOBH Reunion Recap: Erika and Rinna Lash Out and Gang Up On Denise, Kyle Accuses Garcelle of Not Paying Charity Donation 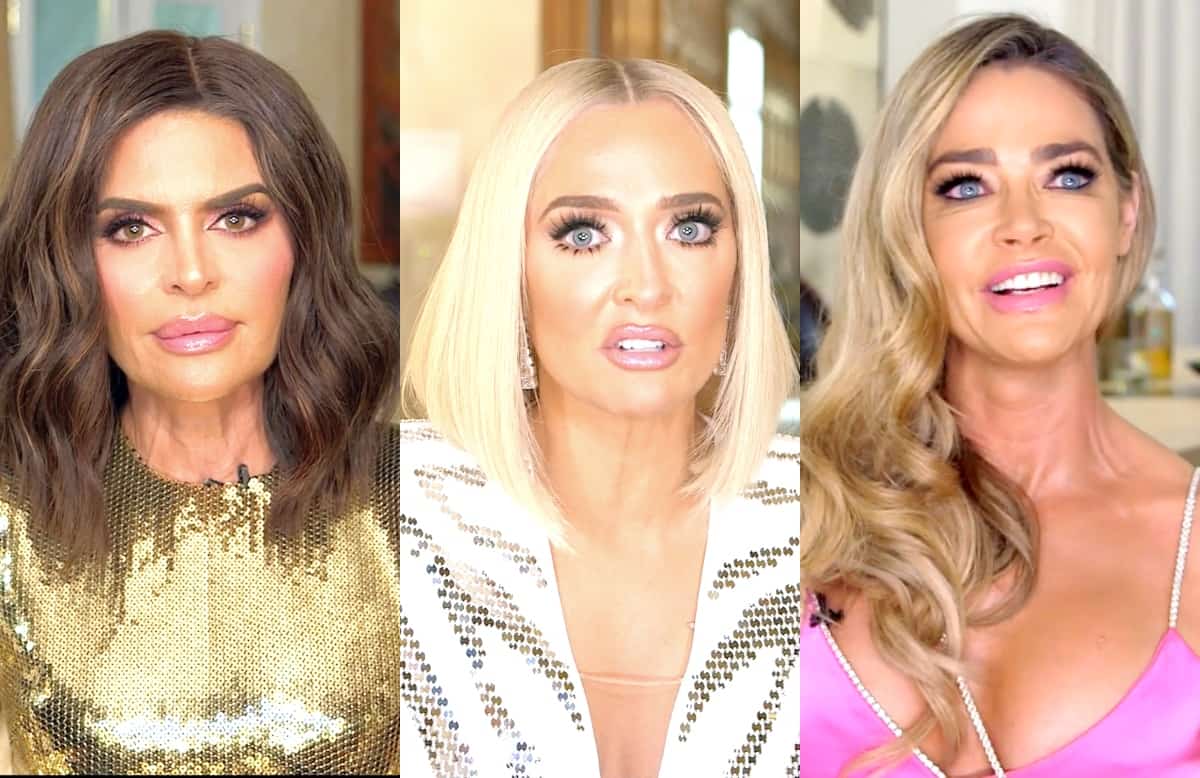 A THREE-PART Zoom Real Housewives of Beverly Hills reunion with these women may not even be able to help resolve all the issues this group has! Kicking off with part one…

Wow. They are KILLING it with their lewks and it is clear that the ladies did not come to play. Kyle looks a bit like Elvira, Dorit is channeling some Star Wars character with those braids, and Teddi, well Teddi has tried to liven up her boring-ness by dying her hair pink. In the words of Andy Cohen, “Pink hair, don’t care.” Why is it that these women are obsessed with their hair? Tonight, Rinna is donning yet a different wig and is bringing “Joan” to the party. Here’s to hoping “Joan” tells the truth more than Rinna does…

LOL to Garcelle stating that Asa, from Shahs of Sunset, has the most “amazing caftans.” Kyle’s face straight drops upon hearing that comment, but she attempts to paste on some fake toothless grin. Jealousy is such an ugly trait.

Loving Garcelle’s reactions to her playback reel. At least she remained true to herself throughout the season, especially when it came to her relationship with Kyle. Kyle rubs her hands together as if she is ready to rumble. Ya’ll know that Kyle thinks she is an angel from above, so to have Garcelle question her motives and sentiment is straight delicious.

Garcelle makes it clear that she never felt like she clicked with Kyle or that Kyle took the time to get to know her. Already Kyle is interrupting and jumping to her own defense without even letting Garcelle explain her feelings. Can we all agree that Kyle should just be kept on mute for the rest of the reunion?

Numerous housewives claim that Kyle’s communication skills suck. Kyle should take a hint and realize that she should stop glazing over people and interrupting them. Instead, though, she deflects. She tells Garcelle, “You were never there. We had no chance to bond,” as if that is some excuse for the way she treated Garcelle. When Kyle realizes she isn’t getting any sympathy from Garcelle, she drops a bombshell. Holy hell. Kyle states that Garcelle never paid the $5,000 she volunteered to donate for the Children’s Hospital. Of course Kyle has to go there when she has LEGIT nothing else to bring up about Garcelle. Can we please see some receipts? And isn’t it sooo funny that Kyle chose not to call Garcelle in private about this matter and outed her on national television instead? 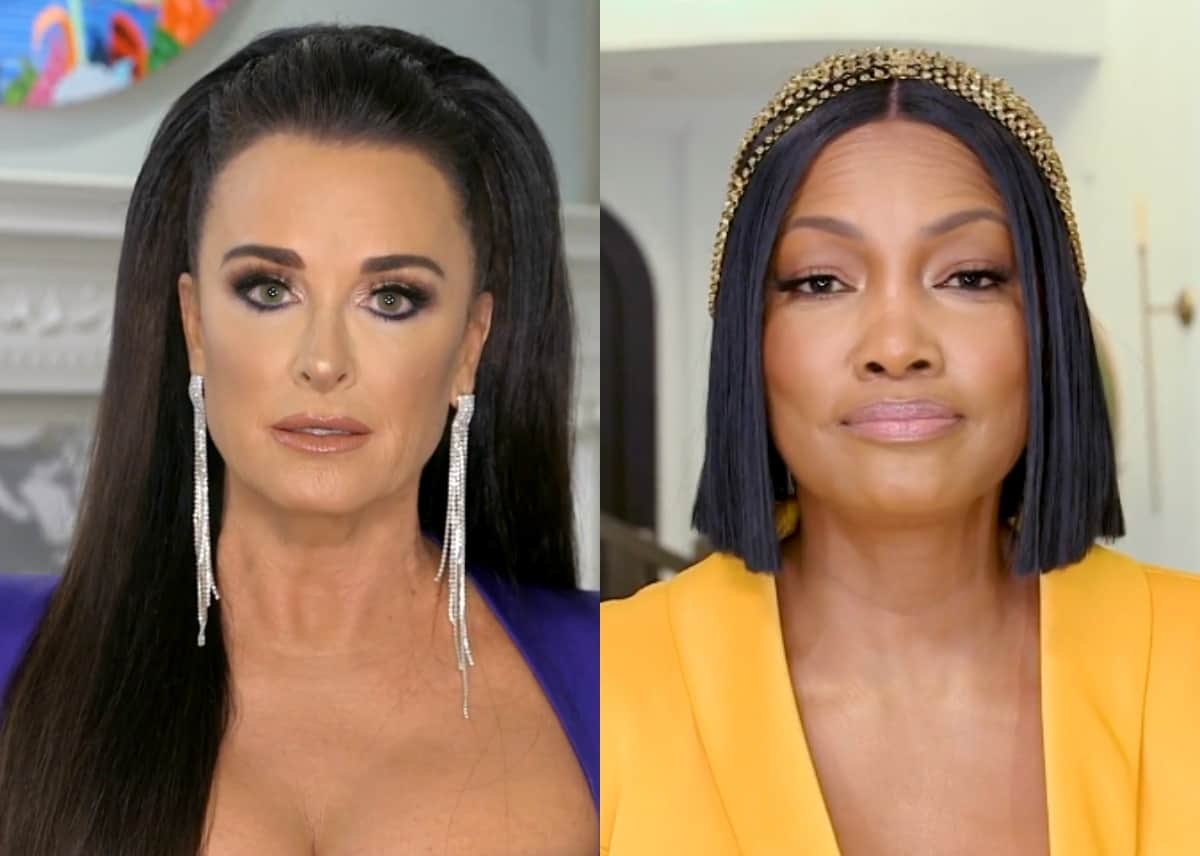 Side note: Someone please slap that smirk off of Rinna’s face while Kyle and Garcelle go at it. Thanks.

On being the first Black housewife, Garcelle explains that she did, in fact, feel pressure. Because race is such a fine line, Garcelle felt as though the other women were a bit nervous about what they would say around her. She states that she feels a bit hopeful about the Black Lives Matter movement. It’s interesting to see how suddenly these women STFU (for ONCE) as Garcelle addresses this subject. Naturally, Kyle jumps in and shares that she has an ongoing conversation about BLM with her family, too.

Erika looks SKINNNNNY. Like borderline bobblehead skinny. She addresses the fact that her son is a cop. It’s interesting that Garcelle “actually reached out to Erika to check on her son” during the most heated period. I’m here for this budding friendship between Garcelle and Erika.

When asked why she is selling her 9-million-dollar home, Sutton responds, “I’m moving because I’m desperately broke.” Oh, Sutton. You’re a rockstar. Please give this lady a diamond already! TBH, some of her couture looks are a bit questionable. Tonight she looks ladylike, though, even though I can tell she is ready to box with Dorit.

Dorit apologizes to Sutton right off the bat for misconstruing Sutton’s words on the night of Rinna’s daughters’ clothing line launch. It was honestly so long ago that I feel like we all forgot about it, but not Sutton! She refuses to accept Dorit’s apology. She needs to know why Dorit would announce what she heard at the table. I kind of feel like Sutton is trying HARD to make her presence known, hence her not accepting Dorit’s apology. But when Dorit reminds Sutton she is “new to the group,” Sutton practically z-snaps in Dorit’s face and retorts, “Yes, we know this.” Boom. Interesting that Dorit can say she is sorry and that she played around with the truth and everyone can understand where Dorit is coming from, but we can’t let Denise off the hook for a nanosecond about her alleged lies.

When asked why Kyle stuck up for Sutton at that moment, she retorts, “I defend what is right.” SURE. Sutton seems pleased with having made a name for herself this season, though I can’t really tell if Sutton is serious or mocking when she tells the women, “I was trying to buy your friendship” with a straight face.

Ah, the first impressions game. Sutton infamously called Teddi boring AND pregnant (both are true statements) and this in turn caused Teddi to cry. I love it when Andy calls Teddi out. He reminds Teddi that she always says she wants friends who are direct and honest, but when Sutton actually IS direct and honest to her, she loses it. Sutton questions Teddi by asking, “Are you gonna let my small disdain for your clothes get in the way of our friendship?” Sutton admits that she came across a bit b*tchy at the start of the season or even like a bit of an a*shole. But hey, that’s Sutton!

But really, “Who is the real Denise Richards?” Currently, Denise is a whole MOOD. She doesn’t give a sh*t anymore and looks like she is ready to rock. Let’s be clear. Last season, when Denise was talking about her sex life, her children were not present. This season, when the women were talking about threesomes, her children WERE present. There is a huge difference. Just putting that out there.

It is evident that Denise was playing these ladies all season. Regarding the steaks and strip club statement, Denise chuckles because she made it up and knew Rinna would run back and tell the others. It was almost a test to see how trustworthy Rinna was, and alas, Rinna failed.

When asked why Denise said she did not want to bring her kids around the women, she brought up two valid points. Number one: “Do you think my teenagers want to come and I can’t bring Eloise around a pool unless I am sitting there the whole time.” And number two: After the way they behaved, Denise just didn’t want to even go there again.

It doesn’t take long for threesome-gate to resurface. Erika reminds Denise that she sets the tone when she talks about Aaron’s penis at that same infamous threesome dinner. Finally, Erika has decided to speak at this reunion and she comes in hot. Erika feels as though Denise was trying to make all of the women look bad and that she was singled out by Denise. In fact, Erika did not appreciate the way Denise handled the situation so much so that she blew up and got all gangsta on Denise. “Motherf*cker I am out, that’s bullsh*t.” Welp, that escalated quickly

Rinna shouts out that Denise is gaslighting Erika by making her feel as though Erika is in the wrong. Rinna reminds Denise that from what she saw on film, Sami didn’t *come* to Denise asking about threesomes because she overheard the conversation. Regarding Erika’s comment about Sami already knowing about threesomes, Erika shuts it down by stating, “Stop the false outrage.” Yikes, Erika.

Rinna has stayed quiet long enough and begins rage screaming to Denise that all she does is lie. When Denise denies liking a tweet about Rinna getting fired, Rinna repeats, “You liked a tweet and that says everything.”

Denise is trying to stay afloat when she is getting attacked left and right. She says things like, “I wanna not censor myself,” but she watches what she says. Interesting, Denise. She also shared that her husband got a happy ending last season. Dying over Erika asking how much one of those costs a person…