Below Deck Mediterranean Recap: Jess Gets Jealous of Aesha; Plus Alex and Bugsy FINALLY Hook Up 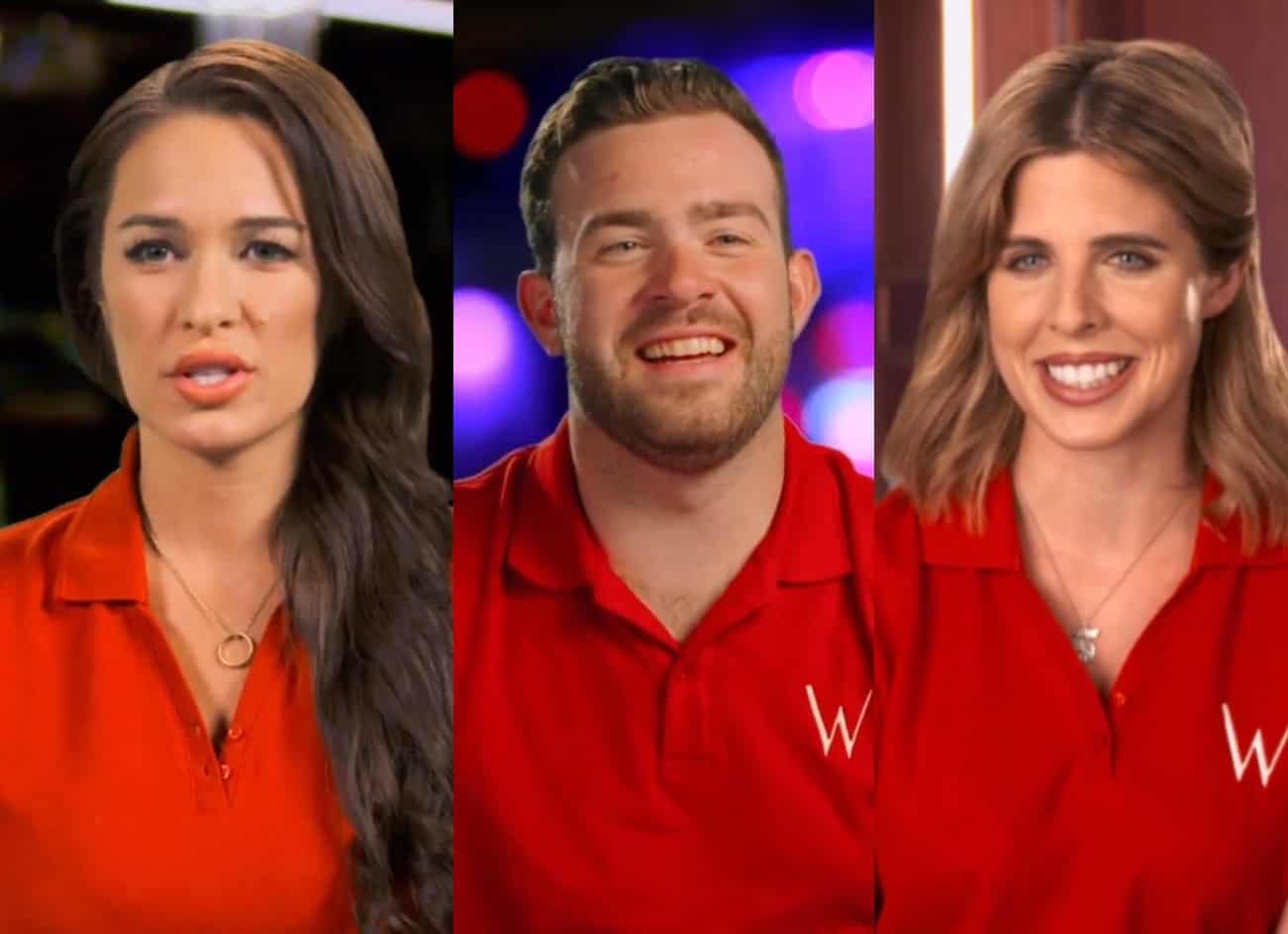 Is Jessica freaking out because of Rob or is she freaking out because she may actually have to do work? As she tries to catch her breath and figure out why her heart is racing, Malia radios Captain Sandy for a medical emergency. Hold up: Why would Captain Sandy make Jess come see HER?! The girl is having heart issues, but sure, make her come down to the galley to be checked out, Captain. The leadership on this boat…

Leave it to Rob to think Jess’s issues stem from him. Typical. Jess claims that she has never had that happen to her, but Captain Sandy insists on taking her blood pressure anyway. She then rattles off a terrifying statistic that one in three women die of a heart attack or stroke (yikes) and proceeds to text her doctor friend to find out if Jess is gonna be okay. Dr. Sandy gives Jess the green light to continue working (cuz let’s be real, this boat cannot handle losing yet another crew member) and Jess explains that she doesn’t want to be completely vulnerable around Rob, yet the guy is giving her panic attacks.

Meanwhile, at the Ibiza rager, Aesha is having the time of her life with the WASTED charter guests. Loving how Tom is whipping up this snazzy dinner for these guests who legit have no clue what planet they are on. Johnny Damon can hardly stand, let alone enjoy a tasty meal.

The Gatsby-themed party is taken up a notch as the crew really brings it to the next level with Party City style flapper ensembles and sparkly suspenders. Ya’ll know Bugsy is gonna over-accessorize this look.

Wonder if Tom is gonna feel the heat since Captain Sandy is joining the guests for dinner? Of course he won’t because he has a SOUS CHEF (aka Malia) for crying out loud. Captain Sandy sits down for dinner with a slurring Johnny Damon, who is completely trashed. Damon sends his steak back because he needs it more well done or something like that and Tom feels that it “hurts” when his meal gets sent back. Tom really needs to grow a set and learn how to run a kitchen independently.

At the end of the night, Tom pulls off a bang-up meal and the guests are just getting more and more drunk by the minute. I get that Aesha is trying to liven up the crew, as they are as boring as watching paint dry, but why in the world is Aesha calling Bugsy “sh*t stain?”

Is anyone else over Malia and Tom’s romance? And also Jess and Rob’s? Like, this isn’t the love boat.  And it is CLEAR that on-boat romances do not yield fabulous outcomes, especially when the couples are fighting like Rob and Jess. Rob is stuck in his head and Jess is stuck up Rob’s butt, so there’s that. The relationship is crumbling before their very eyes. It seems like the only thing these two have in common is their work ethic. And by work ethic, I mean that they don’t like working at all.

Okay, so maybe Rob isn’t doing quite a great job on deck, but maybe Malia is being a bit of a hypocrite when she yells at Rob about PDA since she constantly sucks face with Tom. A point for Malia because at least she does her job…and Tom’s. Hearing Malia say that Rob “knows better”  is so annoying, especially because Rob acts as though he has never been on a boat in his life with the way he is moving around.

When Jess gets called up to the bridge for a compliment from Captain Sandy, she nearly loses her mind. I’ve never seen a grown woman more proud of herself for doing laundry. Jess is astounded to realize, “I’m getting better at my job, but my relationship is getting worse.” Strange correlation, isn’t it?

Rob is dropping the ball, I mean the line, left and right. Trying to get the yacht docked shouldn’t be THAT difficult since everyone on board is said to be experienced. Yet Rob is behaving as though this is his first rodeo. After trying THREE times to throw the line to the dock and FAILING, Malia is about to lose her sh*t. According to Malia, it’s “total amateur hour” and Rob is moving like he is stuck in quicksand. What is up with him?! EVENTUALLY, the boat gets docked…with no help from Rob. Malia has had it with Rob and begins venting about him to Bugsy. When Rob catches Malia sh*t talking him, he confronts her like only Rob would and states, “Everyone can make a mistake.” True. But, Rob, you made the same mistakes THREE times…

The crew bids farewell to Damon and his raunchy guests and are excited to see what tip is in store. Before jumping out of their whites and into their reds, Malia asks to speak with Rob. She is like the worst coach ever. Perhaps Rob should try to figure out what is going on in his head before he causes some serious issues with the boat.

LOL to Aesha making fun of Jess for saying “I love you” to Rob. Aesha knows how most of these boat romances end, but Jess gets defensive. She thinks that’s why Aesha is single (buuuurn) and that, of course, her relationship with Rob is different.

Turns out that Damon gave a pretty bummer tip, but I am sure it won’t stop this crew from having a great night out. Things are already getting tense on board when Jess starts getting jealous of Rob and Aesha’s flirty banter. Puh-lease, girl. It is so clear that Jess is insecure in her relationship with Rob since his ex reached out, but now with a new girl on board?  Forget it…

I don’t know what is worse — the Jess and Rob drama OR the Malia and Tom baby talk? I am seriously torn and I can’t take another minute of Malia and Tom in their cabin, but if the alternative is Jess chasing after Rob in a jealous rage, I am out. Jess tells Rob, “I don’t want to bring any more drama in your life.” Rob has clearly checked out of this relationship.

On the other hand, I am loving Bugsy actually giving Alex the time of day while out shopping.  Their flirtation is like a breath of fresh air, amiright? Can Alex and Bugsy just please date?

Pre-night out sunset drinks sounds incredible, but not when it’s Malia and Tom. Give me more BUGSY WITH THE GLITTER MAKEUP. She is like next level, and she is also next level with Alex tonight. She calls herself the boss and is flirting with him SO hard.

Side note: Aren’t you supposed to tip street performers? They couldn’t throw that guy with the glass ball a dollar?! And if everyone could just stop sucking face at dinner that’d be great… Things take a turn when Rob and Jess begin arguing (what else is new). Not even really sure WHAT Rob and Jess are fighting about now. They are mumbling and getting defensive and doing a solid job of making themselves look dumb. Aesha looks bored to death with this group.

At da club, everyone is having the time of their lives, except Jess. And she’s really not having fun when she sees Rob “flirting” with Aesha. It’s just not a good look, Jess. I am happy to report that Alex has moved out of the friend zone with Bugsy!! There’s one couple I don’t mind making out since I have been cheering for it since day one!

You know it’s bad when Malia says that Jess and Rob suck to go out with. They are bringing down the groups’ vibe and Rob explains that things are too hot and cold. This relationship is exhausting and should be canceled. Rob appears to be done with this back and forth, but not sure if Jess is gonna let him go that easily…

TELL US- THOUGHTS ON THE LATEST BELOW DECK MED EPISODE?