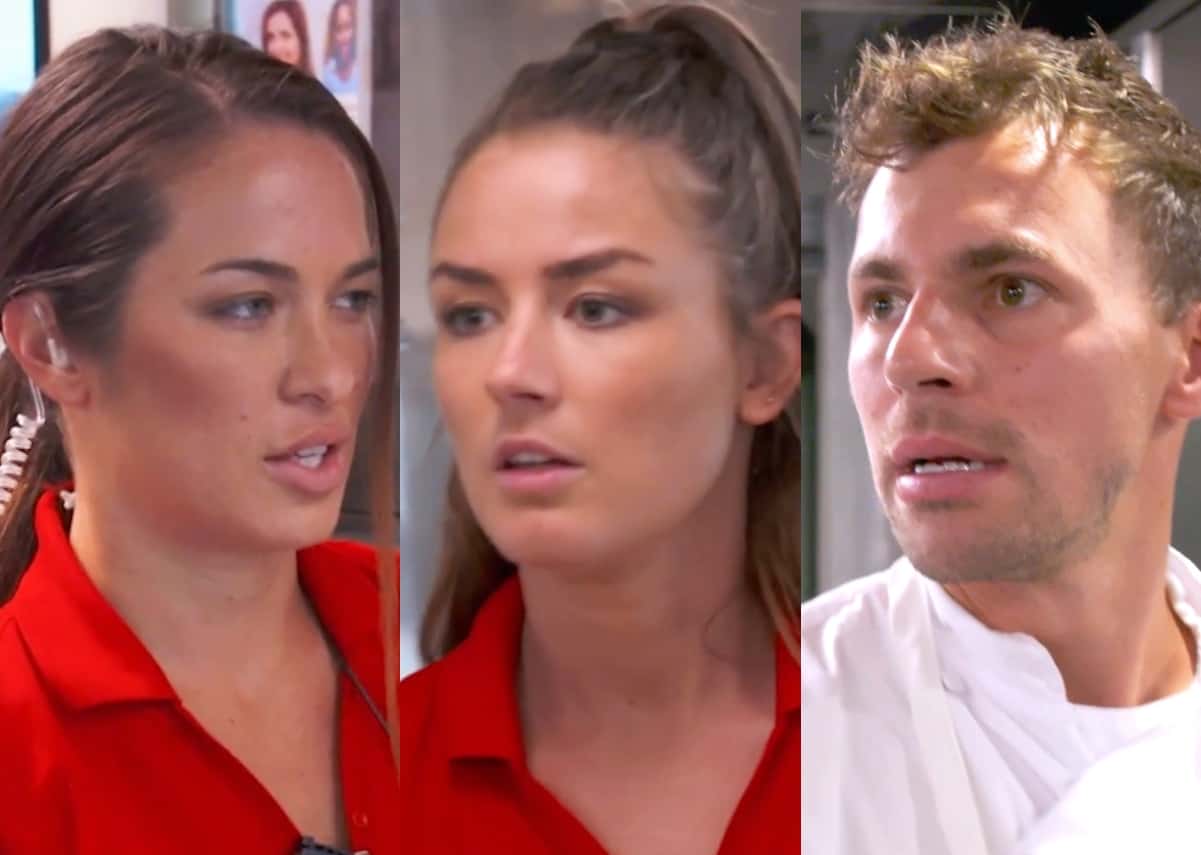 Jealousy is such an ugly trait. On this episode of  Below Deck Mediterranean, Jessica has smoke coming out of her ears all because she saw Aesha grab Rob‘s butt during a photo op. Will this be the last straw for their relationship??

Something tells me that booty grab wasn’t Aesha’s big move to get Rob’s attention, but I digress. Rob knows Jess is livid, and it doesn’t help that Aesha and Rob are heading off the boat to guide the guests around town.

Rob swears that he didn’t even realize there was a hand on his a*s during the picture. He even goes as far as claiming, “I have quite the sensitive bum. I would have felt a hand on it.” Uh, okay, Rob. I am sure you do.

Rob and Aesha are having a grand old time with the guests, but it is clear that it’s not Aesha that Jess should be afraid of — it’s the parkour momma, Hannah, in the orange net suit. Rob is basically drooling all over her and reminding her over and over that he is a model. Sigh.

Over on the boat, Jess is not hiding her emotions very well. After much slamming and angry stomping, Jess shares the a*s grabbing incident with Bugsy. Bugsy looks equal parts terrified and concerned when Jess spits out, “I’m trying to remain calm cuz I will f*ck her up.” Jess’s ‘tude is going to make a helluva impact on the interior. This girl doesn’t work when she is head over heels in love. Imagine what she’s gonna be like now that she is seeing red?!

It doesn’t help that Bugs went and spilled this drama with the rest of the boat. It’s like a soap opera! Now everyone is talking about it and mentally preparing for the awkwardness that will ensue upon Rob and Aesha’s return to the boat. I’m here for it.

As Rob and Aesha stroll around the town sharing ice cream cones and sightseeing, they’ve lost their guests and get to chatting. Very professional. Although Aesha seems like she is flirting with Rob, especially when discussing his very prominent cheekbones (which, according to her, his mother must’ve done a kegel at the exact moment to cause those beautiful bad boys), it is clear she isn’t into him *that* way. Aesha states, “He reminds me of Edward Scissorhands.” See, Jess? You have NOTHING to be worried about…except of course a bad haircut. LOL.

While waiting for the guests to come back, Tom claims that he is “not proud” of the way he has acted. Therefore, he has decided to take the advice of the captain and write his break time on the board. Juuuust as Tom hops into his bunk, the guests radio that they are returning… and they are hungry. Bugsy has the lucky job of waking up diva Tom, but luckily, there’s only a request for a Caesar salad and some nachos. Ah, nachos. The very thing that has devastated so many chefs from the past. Let’s be real: nachos are the straight kiss of death for chefs on a yacht.

Tom messes up right away by serving a salad with bacon on it to the guest who doesn’t eat meat. Preference sheets are there for a reason. Perhaps instead of moaning and groaning, Tom should have truly perused the sheet to be sure his guests are getting exactly what they want.

When Aesha greets Jess with a, “Hey girlfriend!” it’s the cringe around the world. Oh, Aesha. She has NO idea that Jess is internally seething and essentially ready to rip her face off. When Jess can’t take giving the silent treatment a second longer, she turns to Aesha to “get something” off her chest. Aesha is absolutely shocked to hear that she touched Rob’s a*s and doesn’t even remember doing it.  Aesha states, “It’s not like it’s a particularly majestic butt.” LOL.

Jess is not amused or accepting of Aesha’s (very heartfelt) apology. She’s not buying Aesha’s story and says, “I guess when I’m in a relationship it’s not a free for all for anyone to grab anything.” OMG, Jess. Let’s talk about your self-esteem issues…

Whoaaaa. Did ya’ll see Jess throwing back a shot…or two?! Hello! Inappropriate. I guess she figures YOLO — I mean, there’s only one day left. What’s Captain Sandy going to do? Fire her?? Things must be pretty bad inside that mind of hers if she is drinking on the job.

When Rob confronts Jess mid cig break, it’s the same story allll over again. Rob can’t stand Jess’s jealous streak. But really, how is this Rob’s fault that Aesha grabbed his butt? Can we all agree that they should just break it off? Jess needs to direct her energy into working and not fighting with Rob.

To add to the awkwardness, Jess and Rob get caught mid-fight by the charter guests. Where’s Malia to scold them when it counts? Bugs has a sit-down with Jess and basically lets her know that Jess can’t shut down even though it’s the last night. Jess clearly doesn’t give a sh*t about anything Bugsy is saying as she can only think about Rob.

Speaking of Rob…  Can we get a translator for him? It is nearly impossible to understand his conversation with Captain Sandy. It’s interesting that he requests to talk to her and then just spills about his dysfunctional relationship with Jess. After a while, he asks about other opportunities available in the yachting world to push along his career.

Aesha still can’t wrap her mind around Jess’s dramatic confrontation and I am LOLing at Malia giving Rob relationship advice (see recent WWHL where she dishes on the end of her relationship with Tom).

I don’t think I have ever seen Tom smile so big. It’s the final dinner and apparently the dinner that he is preparing “can’t go wrong.” Well, unless you make beef for a lady who doesn’t EAT MEAT. You can find this information on something called a preference sheet, Tom.

Rob can’t find anyone else to complain about his trip to Bali with anymore so he has brought his drama to David, the first mate. When he finds out that he could stay on the boat for the crossing, he looks thrilled. David tells Rob to let him know if he would like to stick around, but of course, this means that if he agrees, Bali is out of Rob’s future….

HOLD UP. Was Tom upset that Rob put his hands around Malia’s chest? Asking for a friend ::cough cough:: Jess. It’s all smiles down in the galley, even from the captain. Captain Sandy hovering and telling Malia she makes a “nice little sous chef” is laughable. Remember when Captain Sandy told her that she needed to stay out of the galley? Of course, the captain praises her little minion. So ridiculous.

As dinner gets served, the charter guest reminds Aesha that she doesn’t eat meat. Kinda feel like Bugsy could have intercepted this disaster. Earlier she had to return a salad that had bacon on it to Tom. How could she forget that the guest does not eat meat?! And TOM. YOU HAVE ONE JOB. It also doesn’t help at all that Tom messed up the meal for the snottiest guest in the group.

How ’bout Malia and Tom smooching in the kitchen while Aesha cleans up around them? Malia should be reminded that she is the first to call out unprofessionalism on the yacht… Post dinner, it’s time for the PJ party silent disco. This is the strangest thing to watch and I am perplexed as to the pajama requirement. Whatever. It’s the last night. There are no rules!

The next morning, Rob and Jess are back at it. Rob cuts off “completely” and he puts Jess’s issues on her. She whines and blames him for blowing everything out of proportion (really??), and Rob just storms away…right into David’s arms. Rob has made his decision. He is in for the crossing. How is he going to break the news to Jess? And how is she going to react to this change in plans?