Below Deck Mediterranean Recap: Are Rob and Jess Broken Up? Plus, What Happens When the Charter Guests Drink With the Crew? 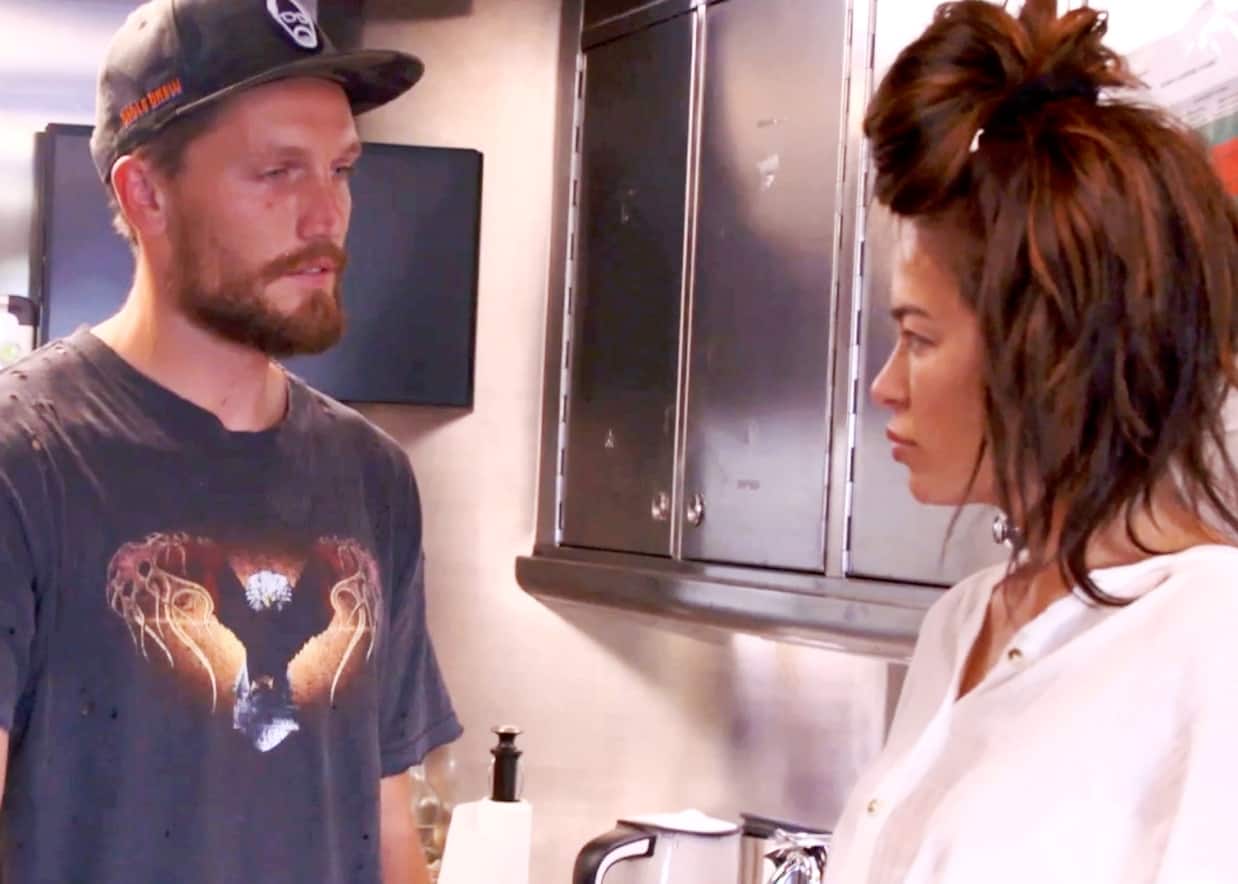 Thanks for the recap to kick off the finale of Below Deck Mediterranean, Bravo. Was nice to take a walk down memory lane and see the crew members from the past get their spotlight one final time. Lara? Ah yes. Kiko and Hannah? Sigh. Pete? Oh wait…he’s still on, just edited out 99.9999% of the time. What a long way this crew has come…

The last day of the last charter and it’s the last straw for Jessica and Rob‘s EXHAUSTING relationship. Rob has made the executive decision to nix Bali and join in on the crossing. It’s no shocker that this couple was going to crash and burn, and it’s no shocker that Captain Sandy allows Malia to get the boat moving. Can we say favoritism?

Rob shares with Alex that he has decided to do the crossing, Aesha shares that she is done with yachting, and Tom shares that he has “never had so much stress.” Tom, that’s cuz you are a wuss. Everyone seems pretty excited that this is the end of the road for work — especially Jess because we all know about her “work” ethic.

Ground line issues come up when it comes time to dock the boat for the final time. Is it me or is it like it’s Captain Sandy’s first time docking EVERY time?! Like, at least pretend to look like you know what you’re doing. Luckily, the yacht slides right in and the crew bids farewell to the moms gone wild. Hannah, the primary, hands over a thick envelope and smizes at Rob as she sashays away. Is Jess jealous?

#finaltipmeeting! Captain Sandy is thrilled to see how much of a team her crew has become. Gotta give it to Bugsy for whippin’ the interior into shape and the captain is so thrilled with the women leaders on board that she actually quotes Beyoncé and shouts, “Who rules the world?!” Overall this season, each crew member has made about $14,000.00. Doesn’t seem like quite enough to have to deal with Rob and Jess….…and the annoying guests.

Captain Sandy cheeses it up when she begins ranking her crew on a scale and giving them awards. Um, was Sandy joking with Jess’s Beaufort rating?! Always a smile? Always up for a task? Is the captain talking about the same Jess? Side note: Anyone else curious what Pete’s award said?

Listening to Captain Sandy rate the clowns on board is painful until she gets to Aesha. She calls Aesha a breath of fresh air, but really, she is the one who straight saved the season. It’s hilarious how Captain Sandy leaves her bestie, Malia, for last. Captain Sandy states she is joining the crew for dinner, which is def a total buzzkill. Speaking of buzzkill, Jess finds Captain Sandy post meeting and pays her — I mean, thanks her — for saying those kind words about her. The captain explains that she sees Jess as a good person and sees a lot of potential in her.

Did Bugsy really just say, “Huggy for Buggy” to Alex?? I wish she would stop tormenting Alex already and just admit that she loves him. Ugh. Let’s see what the night brings. Everyone is stepping up their lewk for the last night — I mean, get a load of Captain Sandy’s sparkly shoes. She is giving Michael Jackson a run for his money. While getting ready, Jess asks Rob, “Are we good?” and then she suggests they be single for the evening…“you do you.” I am SURE that’s a great idea and will def end REALLY well. And I am SURE she never in a million years thought Rob would actually use her words against her.

The final dinner set up is quite beautiful. It certainly rivals Bugsy and her accessories. As everyone settles into their seats, Jess shoots Rob the stink eye with every move he makes. On a different couple’s note, are Tom and Malia wearing matching outfits? Gag. How much has Bugsy had to drink that she gets up with the dancers at dinner?  She manages to get the rest of the crew up on their feet, too…well, everyone but Jess and her puss. Captain Sandy sits back and admires the kinship the crew has developed. Sandy says so long and dips out post dinner, and the gang heads off to pop bottles and bicker…well, just Rob and Jess bicker, cuz what else is new?

While at da club sharing a sofa with her jolly, cheerful, FUN crew members, Jess decides now is the time to discuss her complicated relationship with Rob. Does Jess truly think that this conversation will end well and that no one else can hear their chat about their dysfunctional love? Rob is totally secretly happy that Jess suggested they both be single tonight, but she’s making his life a living hell. Rob looks as though he is counting in his head to try and remain calm, whereas Jess refers to this situation as a “f*cking nightmare” and storms away. This causes Bugsy to follow her to make sure she is okay, except Jess never responds to Bugsy’s attempt to help.

The night moves on and the crew drinks more. Talk about a turn of events…the charter guests that just got off the boat are at the bar! Looks like Rob’s dream of hooking up with a MILF may actually come true. As Rob talks about having souls connected with Hannah, Jess shoots legit daggers at the duo. She is LOSING her sh*t when she sees Rob talking to Hannah…even though she told him to be single?! As Jess cries on the van ride home, Malia gives her a pep talk while Bugs sleeps on the back seat and Aesha looks as though she wants to just jump out the window. Meanwhile, in the dudes’ van, Alex reminds Rob to not be manipulated by Jess. Can we all just agree: More Bugsy and Alex. Less Rob and Jess. And even less Tom and Malia.

The next morning, the FINAL morning, Jess and Rob wake up in the same room, but not in the same bed. Rob finally tells Jess that he is doing the crossing instead of going to Bali. After yelling at him for “damaging” her, she asks for a hug and attempts to convince him to not run from her…because she is not psychotic at all. Rob breaks and tells Jess he has two days to decide officially about the crossing and Jess begs him to keep the Bali plans in place. The suspense is killing me….not.

Alex is the first to go and I am sad to see it. He was such a positive person on board that even Bugsy fell for him with a couple of make-out sessions! Hold up. Did Rob and Jess have moths in their bunk? WTF is up with Rob’s shirt…and could his exit be any more anticlimactic? Jess follows Rob like a little duckling and the remaining crew members still on board are SO happy to see them go. It turns out that Rob DID go to Bali with Jess and I am sure he was incredibly happy the whole time. I’m assuming Pete left the boat despite not seeing his departure. Either he was edited out completely or he took over Rob’s position for that crossing…

Aesha says goodbye and couldn’t be more excited to get off that boat and head home. Bugsy helped to make Sandy’s “dream come true,” but honestly, she did do a rather nice job of holding down the interior. As opposed to Tom’s short time on the yacht…not exactly the most pleasant chap, but he comes with Malia, so there’s that. As Malia puts it, “The sea is the limit.” OMG. Captain Sandy waves goodbye to the final two members and reflects on the season. She claims she is so grateful she had the opportunity to work with all of the crew, but I am wondering if she is omitting Kiko and Hannah from that “crew” statement. Despite the ups and downs, edits and firings, we can all agree on one thing: Jess and Rob have no business staying together. Anchors away until next season.