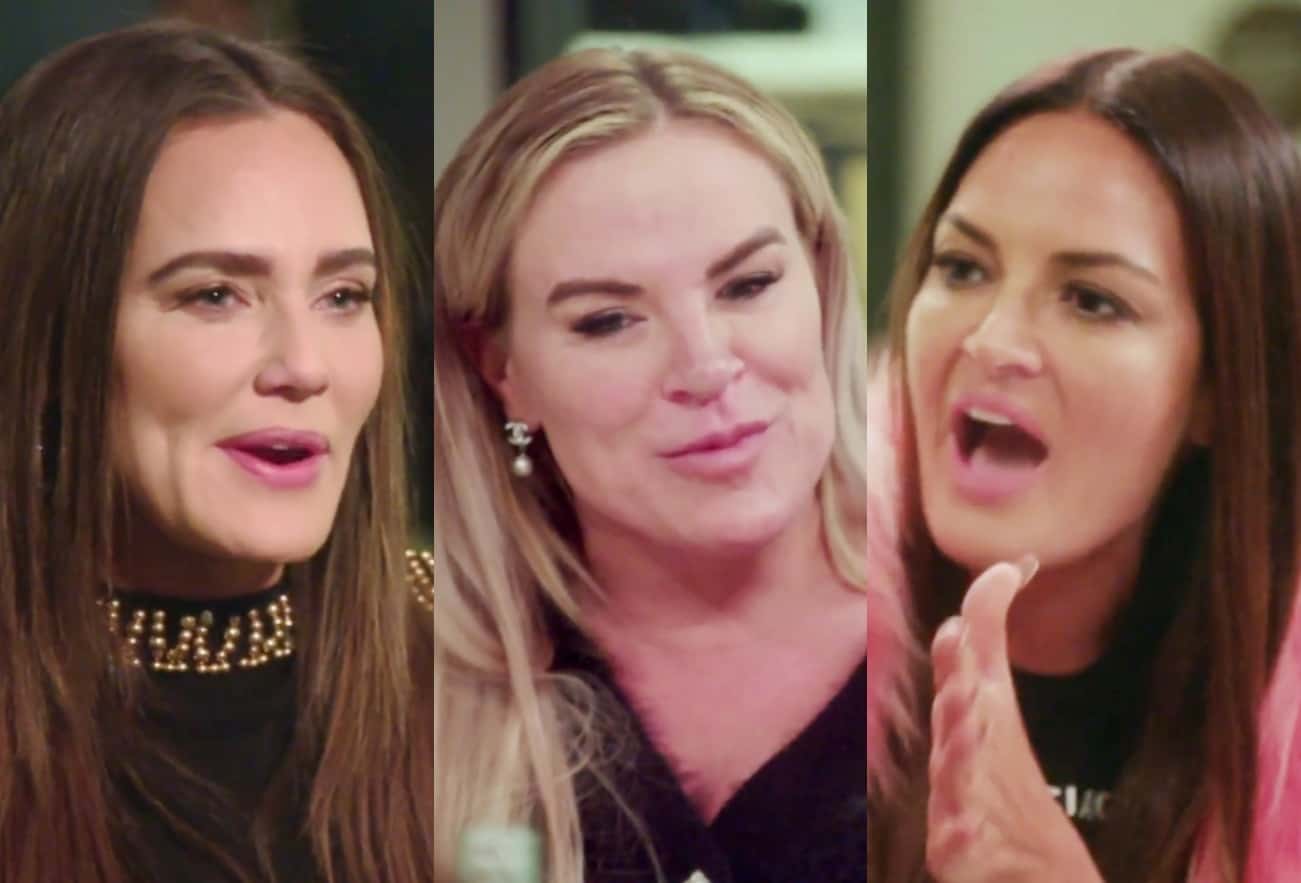 Welcome back! Ready for round two of the Real Housewives of Salt Lake City? I sure am! Last week, we left off with Jen Shah dramatically storming away after Mary Cosby refused to apologize for saying Jen smelled like a big ol’ hospital. Before we find out what happens next, let’s get some taglines out of the way, shall we?

First up is Lisa Barlow, whose tagline is, “When you take cheap shots, always expect a hangover.” Ha, I get it. Vida Tequila. Lisa is firing a warning shot that if you come for her, expect to be dehydrated, irritable, and sensitive to light the next day, so beware.

Mary Cosby’s tagline is, “I love God, but I will read you like a scripture.” Oof. Sorry, but I am judging this woman so hard right now. How can Mary preach about compassion as First Lady of her church but so easily hurt people’s feelings outside of it? Also, she married her grandaddy, so Mary should probably stay away from reading others.

Next is Meredith Marks with the tagline, “Jealousy is a disease, to which I say, ‘Get well soon!’” Hmm. Clever girl. I was iffy on her in the last episode, but I’m becoming more and more convinced that Meredith is the smartest one of the bunch.

Jen Shah’s tagline is, “In this town, I’m Queen B and MVP.” Just curious, but what town is Jen referring to? Salt Lake? Her ski chalet looked like it was up in Park City, which is a whole county away. I guess calling the show Real Housewives of Park City would confuse at least 90% of the world, and Real Housewives of Utah just sounds stupid, so maybe Jen is broadly marking her territory all over Northern Utah? Who knows. Let’s press pause on the taglines for now and get back to Jen/Meredith’s party.

Most of the women are dancing and having a great time, but not Jen, who’s screaming at her hairstylist in the bathroom. She eventually comes out and scraps with Mary some more, but Meredith intervenes and is all, “C’mon, guys, not at my ‘birthday’ party, please.” Her monotone voice must have had a calming effect on the two because Mary quickly gives Jen an insincere “sorry if I hurt you” apology and they decide to hug it out.

After the ski chalet extravaganza is over, Jen and her kids are Swiffering the place up, and in walks her hot husband Sharrieff. I didn’t notice before, but apparently, Sharrieff didn’t attend the party, and now he wants to know how many people Jen had over. “Oh, just the girls!” Jen innocently squeaks, and then she bats her fake eyelashes coyly. I sense trouble on the horizon.

Next, we’re at the abode of Whitney Rose, which is so bland that I still have no idea what it looks like. Whitney shows off some pole dancing moves to her daughter and then meets Heather Gay at a snowboard shop. Yay, a ski trip is coming up! Heather says she grew up on the slopes, and if you live here and don’t ski, you’re a tragedy.

Okay, two things. First, I am that tragedy that has never skied in Utah despite living here for decades. Sorry, I get cold, what do you want from me?! And second, my prediction about Heather being a good skier from the last recap is coming to fruition. Huzzah!

Later on, we get a nice view of downtown SLC during the holidays. Whitney (At her house? Apartment? Not sure.) pleads with her son to get off his phone while she makes grilled cheese sandwiches. By the way, Whitney’s tagline is, “This rose isn’t scared to handle a little prick,” and I’m sure she didn’t mean to strike this visual, but I immediately wondered about her husband’s penis upon hearing it.

Whoa, whoa, whoaaaaa! Meredith and Seth are separated! Earlier in the episode, Meredith mentioned that Seth does business in Chicago and she has to stay in Utah for her own business, and now we know what’s up. They go to dinner at Handle, and now Seth is the one demanding that Meredith get off her phone. He then angrily asks Meredith, “WHO HAVE YOU TOLD that we’re separated?”

Before Meredith can even answer, in comes their server with drinks, and I LOL’d at the impeccable timing. Seth asks, “Our relationship, our marriage…do you think that was meant to last?” Meredith weakly responds with, “I hope so.” She tells the viewers their marriage deteriorated over the years through lack of communication and built up hostility, and now they’re at a breaking point of disconnection. Meredith seems ready to move on, but Seth looks like he’s about to cry. This show just got really juicy all of a sudden.

The ladies meet up at Snowbird Ski Resort, and Lisa tells us her job is to look good in a ski outfit. Then Jen shows up and says, “People are going to think I’m on the black diamond because I AM the black diamond,” so we’ve got a number of women feeling themselves on this ski trip. For those that don’t know what a ‘black diamond’ is, it’s the steepest and most difficult slope in a ski area.

Mary and Jen circle each other at first but stay civil for the day. Then we get to see all that beautiful snow!!! On the mountain! This is what RHOSLC has going for it that the other franchises don’t: spectacularly beautiful scenery! (Hell, maybe I should start skiing.) It’s fun to watch the ladies hit the slopes and have a good time.

Meredith, Heather, and Whitney are on top of the mountain, and Heather brings up past drama between Whitney and Lisa. Whitney explains that despite knowing each other for years, she and Lisa still struggle to communicate, and then it cuts to a scene where Lisa haughtily tells Whitney she could use a stylist. Yikes.

After skiing, the women meet for dinner and talk about religion. That sounds…fun? Lisa says that as a convert, she likes being LDS and it makes her life better, and then Heather tells everyone not to judge. Mary seems confused and asks why anyone would judge, and Heather says that’s the culture they were raised in. This statement checks, particularly with Utah Mormon culture, which is very insular and a bit more intense of a lifestyle than Mormons living out-of-state.

Whitney chimes in, “We all judge each other. I’ve felt judged many, many times,” and she looks right over at Lisa, who is wearing the third pink muppet fashion concoction I’ve seen so far this season. Lisa responds to Whitney, “I don’t judge you because I don’t care enough to judge you.” Heather yelps, “How rude!” And now, Lisa finds herself sparring with two people. It looks like we’ll have to see what happens next week!

I saved Heather’s tagline of, “Just like my pioneer ancestors, I’m trying to blaze a new trail,” for last. Some people have commented that she doesn’t fit the Housewives mold or whatever, but I’m glad Heather is on the show, and here’s the reason why: We get to observe a particular phase that many Mormons go through after distancing or separating themselves from the religion.

I left the church when I was 15-years-old and ended up partying my ass off for years afterward. In retrospect, it was a form of rebellion I was hardly even conscious of at the time. After you leave the faith you were raised in, and crush your parents’ dreams of being together as a family in the afterlife, one way of ignoring the complicated feelings that follow is to self-medicate, which I’ve witnessed numerous ex-members in Utah do at various stages of their lives.

I could be totally wrong, but Heather seems to be drowning out the religious part of her past by getting her Bad Girl on, and I think Whitney might be too in her own way. We roll our eyes when Housewives blather on about their “journeys,” but with Heather, I actually sense that she’s on one. Her life is so entrenched in Mormonism that she can hardly speak without making a reference to it. She’s not my favorite or anything, but I’m intrigued to see what’s next for her.

Anyways! On next week’s episode, Lisa teaches one of her kids to drive, Whitney visits Mary’s church, and Jen does something with her legs that makes a guy shout, “I don’t want to see her vagina!” (Please tell me that was not a teenager.) And finally, Meredith’s son Brooks becomes Man of the House.

So far, this show has been really fun, which makes its time slot all the more tragic! Bravo, please move RHOSLC to its own night at an earlier time, and I’ll bet the ratings will pick up. See you next week, Blurbers!

TELL US – WHAT DID YOU THINK OF THE EPISODE? IS JEN HIDING SOMETHING FROM SHARRIEFF? WHAT’S THE DEAL WITH WHITNEY’S DAD’S BLACK WIG??