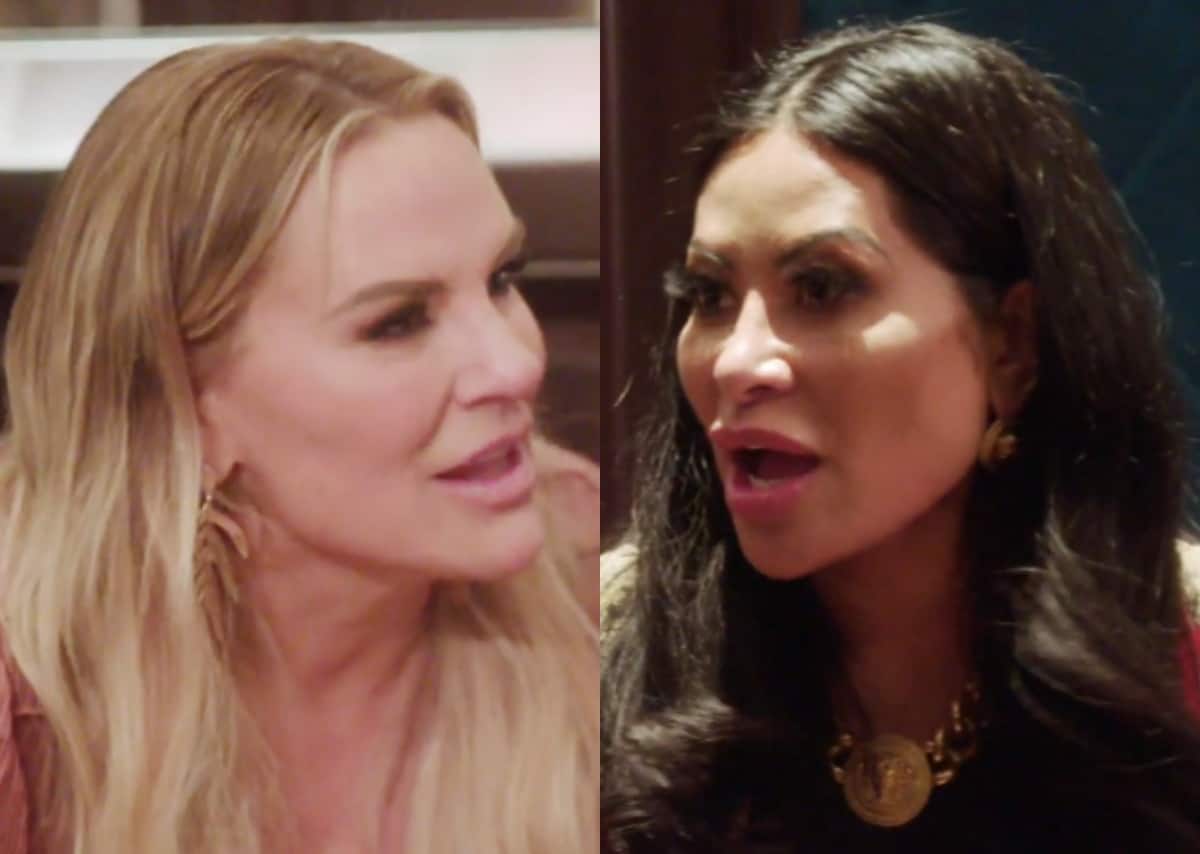 Welcome back! In this latest episode of Real Housewives of Salt Lake City, the ladies get their freak on in Las Vegas, and good old-fashioned Drama pops out to say hello. Your humble little recapper has a big ass stomachache, so please bear with me while I attempt to snark in between bathroom trips, okay, Blurbers? Okay. Now let’s get to the recap!

We start off at Whitney Rose’s house as Ms. Baby Voice prepares for a family dinner. Her half-brother Will comes over, and the tension is thick. Whitney desperately wants to see Steve come out on the other side of addiction, so she invited Will and her sister Shaylee over for Thai food to break the ice with their dad. While Will is somewhat supportive of Steve’s recovery steps, Shaylee really doesn’t want to have anything to do with him, and it shows.

Steve and Shaylee arrive one after the other, and this is the first time the gang’s been together for a loooong time. The siblings ask Steve how he’s doing at sober living, and he tells them he has made some real progress. All three of the kids look a bit uncomfortable and dubious because while he’s talked the talk plenty of times before, Steve always peters out early when he attempts to walk the walk. This scene is bumming me out, so let’s move on.

Next, we’re back at Cucina Toscana (again?), and Heather Gay meets up with Jen Shah and Sharrieff for dinner. There is a fourth chair at the table reserved for a blind date Sharrieff set up for Heather, and in walks his best friend Keith, aka “Big Daddy.” Keith seems fine but boring, and Heather looks annoyed he ordered a Shirley Temple while she’s in the mood to DRANK.

The sparks clearly aren’t flying between Heather and Big Daddy, but she keeps it polite and asks about his job in Pennsylvania. Bravo throws a shady clock up on the screen as Keith explains his career for OVER AN HOUR. Jen and Sharrieff want to go salsa dancing after dinner, but Heather is ready to go the hell home. Sharrieff isn’t much of a matchmaker, is he?

Back at Whitney’s house, in a totally-not-producer-driven-scene-whatsoever, Whitney asks Justin if it’s cool if she takes the ladies out for a girl’s trip to Vegas. Justin has the same look on his face as I do with the stomach flu, but he is all, “Whatevs. Just don’t get murdered by the other women.”

Whitney texts everyone an invite, and Heather and Jen immediately respond, “YAZZZZ,” while Meredith Marks texts back with a snobby, “Vegas isn’t exactly my scene, but I can probably make it.” Mary Cosby decides not to go since Jen will be there, and wow, this woman is writing herself off the show already, don’t you think? She’s basically the ghost of RHOSLC at this point; a bewigged apparition hovering over all of the 7-11s in the valley.

Meredith calls Lisa Barlow to find out if she’s going to Vegas, and Lisa says she told Whitney she’d think about it. Both of these ladies are still livid with Whitney over her messy behavior at Sharrieff’s party, and neither looks excited to spend a weekend with her.

Next, all the women start packing for the trip. Heather shows off some hideous jungle-print party pants to her daughters, and in case you forgot, I’ll tell you again: I freakin’ love Heather Gay. She doesn’t take herself too seriously and loves to have a good time. Everyone but Lisa and Mary meet up at the airport, and Meredith breaks the news to Whitney that Lisa is already in Vegas for a business meeting or something. Whitney is NOT happy, and she thinks this is just another one of Lisa’s dumb power moves.

After a very quick flight, the ladies arrive in Vegas, and they actually have two limos waiting for them: one for human bodies and the other for Jen’s luggage. En route, Whitney tries calling Lisa and it goes straight to voicemail. Four seconds later, Lisa calls Meredith, and it’s pretty goddamn clear that Lisa wants to make Whitney suffer on this trip. Whitney is pissed and does a hilarious impersonation of Lisa in her talking head. “I can’t even do it. Cuz I can’t look like I’m taking a shit and being sexy at the same time.” BAHAHAHA!

Jen tells us that she knows for a fact that Lisa is still angry with Whitney, and she mentions that she’s actually not that good with Whitney herself. We cut to a flashback where Lisa tells Jen, “I want to go to Vegas just to hear how she came to the conclusion that I have ever said I’m afraid of you.” (RHOSLC, I love ya, but this storyline is beyond stale.)

The ladies arrive at NoMad Hotel, and a concierge comes out to recite a creepy poem about them enjoying their stay. Is this a new trend I’m unaware of? Welcome poems? Whitney tells everyone they have an hour to get ready to go exotic car-racing, but Jen sniffs, “Sorry, but I have a special surprise for Heather, and it’s happening now, so buh bye.”

Lisa shows up in Meredith’s room with purple harem pants tucked into white moon boots, and Meredith tells her they’re going to the racetrack with Whitney… and only Whitney. Lisa unloads all of her feelings about Whitney to Meredith, while Whitney unloads her feelings about Lisa to Heather in another suite. Meredith and her eyebrows feel a certain way about Jen talking about her marriage, and she plans on confronting her on the trip. These people are exhausting.

Heather feels bad about Whitney being stuck with Lisa and Meredith all day, but she is pumped for her big surprise. Jen leads her into a room with SHOES. Lots of shoes. Lots of shoes that should be MINE. Jen felt guilty about Heather’s bad blind date, so she hired personal shoppers to reenact the shopping montage from Pretty Woman. Heather gleefully tries on beautiful pairs of shoes and one hot mess of a pink dress. I absolutely lurve the green suit Jen tries on (despite her cleavage spilling out all over the place), and I had a good laugh at her falling off the countertop trying to look Instagram-hot.

Lisa, Meredith, and Whitney head off to the racetrack in Dead. Silence. It’s so awkward, Whitney tells us she’d rather be at church right now. Lisa brags that she’s raced lots of cars at the Larry Miller track, and she can’t wait to feel the rush again, man! Whitney starts talking, and Lisa cuts her off to take a phone call. Ouch. Meredith sits stoically in the back seat, secretly enjoying Whitney’s discomfort.

The girls arrive at the track and Lisa immediately tells the driving instructors she drives a Porsche on the reg. Whitney picks a green Lamborghini, Lisa matches a red Ferrari with her outfit, and Meredith settles with a pink Porsche. Lisa talked a helluva big game about driving fast cars, but what’s this? She’s only going 70 MILES PER HOUR. I commute to work every day going 80, and what is even the point of cruising around a track if you’re not going over 100?

After driving, Whitney brings up Sharrieff’s hip hop party and apologizes for how things went down. Lisa says, “Honestly, I was confused as to why you wanted to bring so much up to Jen about us when we were both standing right there.” Whitney relays what Mary told her, and Meredith mumbles, “Nobody speaks for me.” Whitney apologizes once again and says she’ll speak directly to them if she hears anything in the future. The slick-haired twins exchange brain fluids for a moment, and then they decide to accept her apology.

Back at the hotel, Jen is finding plenty of clothes and shoes to buy for herself, and, oh, Heather found a few things too. Jen brings up Whitney… hoo boy, really? Wasn’t Sharrieff’s birthday party like a hundred million years ago? Can’t we move on for the sake of MY STOMACH?! I guess not because Jen snarls, “Whitney. You wanna be a big girl? Then come sit at the big girl table and stop eating chicken nuggets at the kiddie table, Whitney. Eat caviar bitch.” LOL.

Heather is confused because she thought everything got resolved in the outdoor bathtubs last week, but oh no. Jen isn’t done. “The only reason I haven’t bitch-slapped her is because she’s your friend, Heather.” What a fun Vegas trip this is turning out to be!

On the next RHOSLC, just when Whitney thinks everything is cool with the group, Heather gives her a world-class, “You in danger, girl,” look. The ladies visit some kind of psychic, and the entire cast apparently doesn’t trust Jen. That’s it for this week, Blurbers! I’m heading back to bed with my Saltines and ginger ale. =)