by Elizabeth May 20, 2021 121 comments
ShareTweetWhatsappPinterestRedditTumblrMailFlipboard 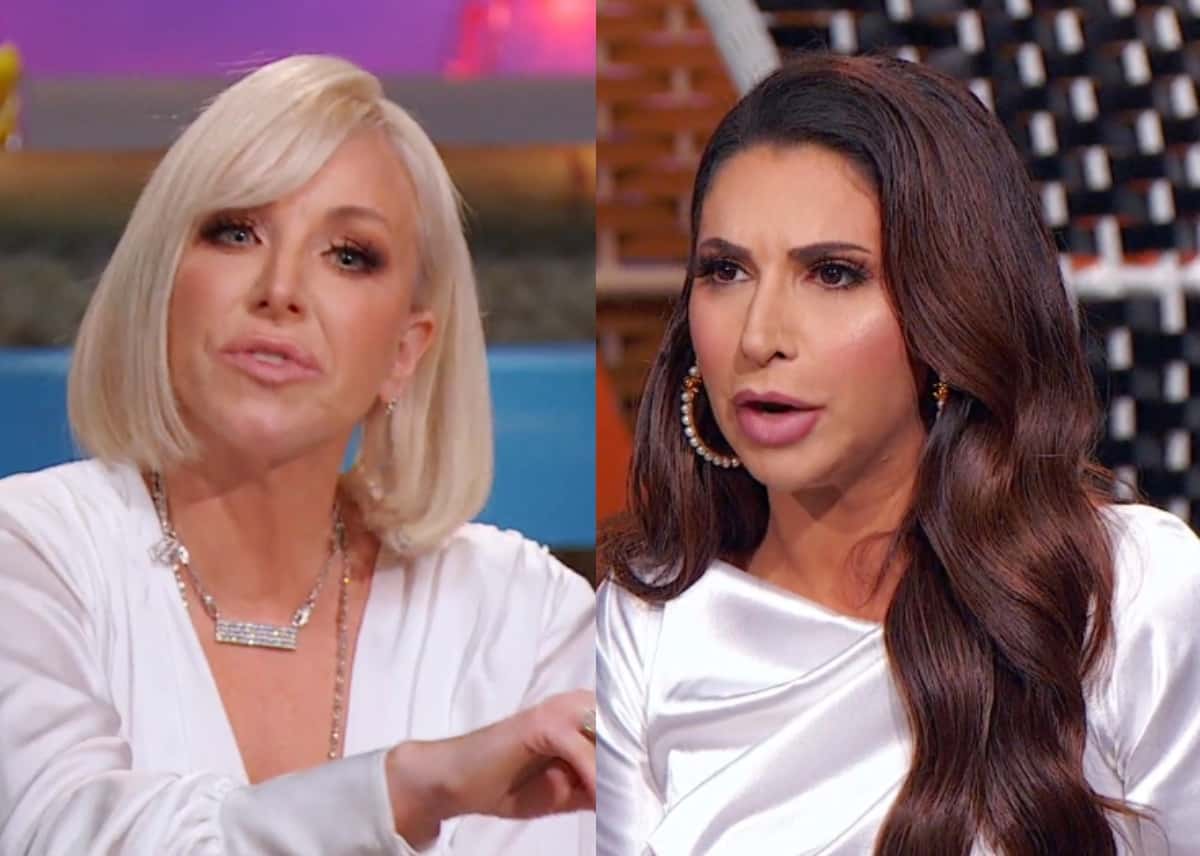 The Real Housewives of New Jersey is back, and our always entertaining Jersey broads are re-hashing this season. Will Teresa spill who told her the RUMOR? Let’s watch and see the drama unfold.

The reunion is being filmed on a Jersey Shore-themed set. It is very fitting for this crew, meaning it is tacky and cheesy. Andy starts us off with his normal banter, and he wants to know what nips and tucks they have done since the last season.

Margaret is wearing a white gown with her boobs spilling out. She does have a better hairstyle that’s an improvement over the ridiculous pigtails. Margaret thinks her facelift has settled and seems confident that it is no longer melting.

Dolores, in her gold pageant gown, shares that she got a new vagina. She is really embarrassed but just CHOSE to blurt that out on television. Dolores really needs to stop surgically altering her body since it has become rather obsessive. I don’t understand this since she is in the gym business. Shouldn’t you be advocating for exercise and healthy eating instead of going under the knife?

Melissa brought notes, and she looks like she is wearing Antonia’s Forever 21 gown. Teresa is dressed in a too-tight sparkly white gown, and she overshares by telling us she is wet and juicy. She needs to lay off the tanner since it makes her legs look rather greasy and meaty. Jackie is wearing a sequined white dress that is rather ordinary. The hair looks good but it makes her ears more pronounced. Jennifer is wearing a gorgeous white, silky dress, and she looks really pretty.

Jackie is happy to discuss the fight between them. She thinks that Teresa is still continuing their fight on social media. Teresa is enjoying the support she has gotten online over the whole analogy debate, and Jackie isn’t pleased.

We first get all of the scenes with the Jersey kids, and some are rather cringe-worthy when the parents overshare. Gia is enjoying that her song has gone viral. She was adorable back then and she actually wrote it herself. Cardi B and Will Smith have used her song on some of their tracks.

Frankie Jr. is working for Luis selling real estate, and David helped him pass the exam. Margaret mentions her biological son and how he doesn’t know much about her role on this show. He is aware that she is TMI on this show. I wonder if her son will even recognize his mom when he moves back to town?

Teresa thinks Jennifer should brag about Bill since he is a doctor. Margaret thinks she should be proud no matter what business he is in. She thinks she uses it for her materialistic benefit. Jen’s identity is wrapped up in the idea according to Marge. Jennifer, in her BIO, mentions she is married to a plastic surgeon. So what, she is?

Teresa digs into Marge by saying, “You wouldn’t say you were married to a plumber, right?” Marge and Joe don’t partake in d*ck swinging. Who knew that was a thing? Marge loves her husband since he is a good, honest man. Sorry, I do have mad respect for anyone who works in the trades, and I have to agree with her on this one.

Jennifer’s parents’ relationship is rehashed, and we see the uncomfortable moments between them. She is still not speaking to her mom. Jennifer’s dad still lives with her. Her mom wants an apology from her. Melissa chimes in to say that Jennifer throws her mom under the bus. Jackie concurs with Melissa. Jennifer thinks Melissa should be more real and show her real life. Melissa retaliates with, “Jennifer has been trying to get on this show for eight years.”

Jennifer doesn’t think there was abuse since she never saw it, but she recognizes there was neglect. Her mom wants her children to punish their dad for his past behavior. Dolores thinks that Jennifer is in a tough spot, and I agree.

Teresa and Jackie start going at it again now. They are both chomping at the bit to tear each other apart. Jackie probably has made Evan watch her practice her opening and closing statement for months now. She has prepared a statement for Evan to memorize so they remain on the same page regarding the cheating rumors.

Jennifer gets called out by a viewer who thinks that she is jealous of Melissa. She isn’t envious of the girl who never met a mirror she didn’t like. Melissa is now coming for Jennifer big time, and she thinks Jen is using her parents’ troubles for a storyline. Margaret can understand why Jen’s mom is upset. Jennifer won’t apologize for taking her dad in. She is trying to acknowledge their feelings, and the only thing that will change it is tossing dad out. Jennifer and her mom are presently at a stalemate.

Melissa doesn’t appreciate Jennifer trashing her in the confessionals. Jennifer tells a story about when the cameras weren’t rolling and Margaret was chatting about Joe Gorga. Michelle apparently came on the show with the sole purpose to ambush the Gorgas. She really didn’t accomplish much in that regard and didn’t add anything to the season other than showcasing her real estate business.

Margaret said, since her husband is in the business, he has heard that Joe Gorga doesn’t pay his bills. Margaret is FUMING right now, but she better be careful since it might cause some melting to occur. She looks to Melissa to see if she believes that and Melissa looks perplexed. YIKES, Jennifer is locked and loaded with receipts. Margaret thinks that, if it was true, Jennifer would have mentioned it on camera this season.

Andy then brings Joe Gorga out to answer questions about their marriage. Production rolls out the clips highlighting their issues that they have encountered this season. Joe thinks fame is like the devil and it has come into their marriage. After 16 years of marriage, their relationship has changed.

Joe claims Melissa controlled everything and slowly cut off his little balls. They are both jealous people and they didn’t want each other out of sight. Joe doesn’t like coming home four nights a week and learning his wife is out and about. Melissa admits for six months she was attending a lot of events. Dolores asserts that their problems are not for show and are real.

Teresa thinks that fame has changed Melissa and the others too. Margaret wants Melissa to strike while the iron is hot. She explains why she called Joe chauvinistic. Melissa defends Joe and says that he is a defender of women. Joe apologizes to Dolores for calling her broken. She doesn’t take offense since she knows that she isn’t broken. Well, then stop surgically altering yourself! Melissa hesitates when Andy asks how they are doing presently. She meekly says they are fine.

Joe admits he is hypocritical about the topic of sex and Antonia. He wants to keep his daughter under his little thumb, but I am sure his boys will get a full playbook when they are teenagers.

We now watch all of the flashbacks of Papa Giacinto, their beloved patriarch. Andy mentions it has been one year since he passed during COVID. Teresa would really like a break and asks God, “When is this going to end?” She went to jail and lost both parents. Andy thinks that break is called Luis and was sent by her parents. Joe likes Luis and thinks they are good for each other. He thinks they are annoying since they are madly in love.

Joe Giudice is now brought up and how he caused a rift between the siblings. The fight that ensued at the Shore got really ugly. That scene with Teresa with her mouth hanging open while Joe rants about Giudice putting their mom in her grave is heart-wrenching. Joe’s parents held their feelings inside to protect their granddaughters. He struggled to be nice to Joe but tried to keep the peace for his parents’ sake.

Teresa claims that she defended her brother at the beginning of her marriage. She doesn’t like how the public comments have affected her kids. Teresa thinks the Gorgas should have defended her when Jackie said the very truthful jail comment.

Teresa cannot get over the one Christmas Eve FROM 10 YEARS AGO when they went to Kathy’s house. She isn’t a stranger, blockhead — she is their cousin too. Teresa can sure hold a grudge, and I just can’t understand why the sprinkle cookies were such a travesty to her. I wouldn’t want to stay somewhere where I was called a raccoon by my brother-in-law either. It honestly seems like Giudice got away with his bad behavior and everyone made exceptions for him.

Teresa still defends her ex, and I find it revolting. She says she has asked him to stop making public comments. Apparently, Joe Giudice never apologized to their parents, and that is really who he should have made amends with. Teresa didn’t try to intentionally break the law so she isn’t culpable?

Teresa and Jackie go at it again over the cheating rumor. Jackie is trying to get Teresa to understand that rumors are hurtful when it is your spouse as well as your kids. Teresa is stubborn and can’t get past the coke comment. Jackie is holding firm that it was just an analogy.

Jackie gets called out on her bad hair extensions. She admits it looked bad, but she blames the Shore humidity, not the lack of a hairbrush. Jennifer thinks that Joe B. is submissive to Marge. Margaret thinks that Jennifer is out-gamed by her. She is shooting daggers at Jennifer like she could take her head off.

Joe B. is now being outed as a bit of a gossiper this season. Jennifer’s drinking clips are now brought up again. Margaret thinks that Jennifer was a sloppy drunk.

Jennifer smugly says that Margaret is the cause of the cheating rumor. OH SNAP! We have to wait till next week to see if Teresa will corroborate this rumor? This episode was pretty tame, but next week looks like everyone is running hot. I hope everyone is having a good week and be well!

TELL US — THOUGHTS ON THE REUNION OF RHONJ?