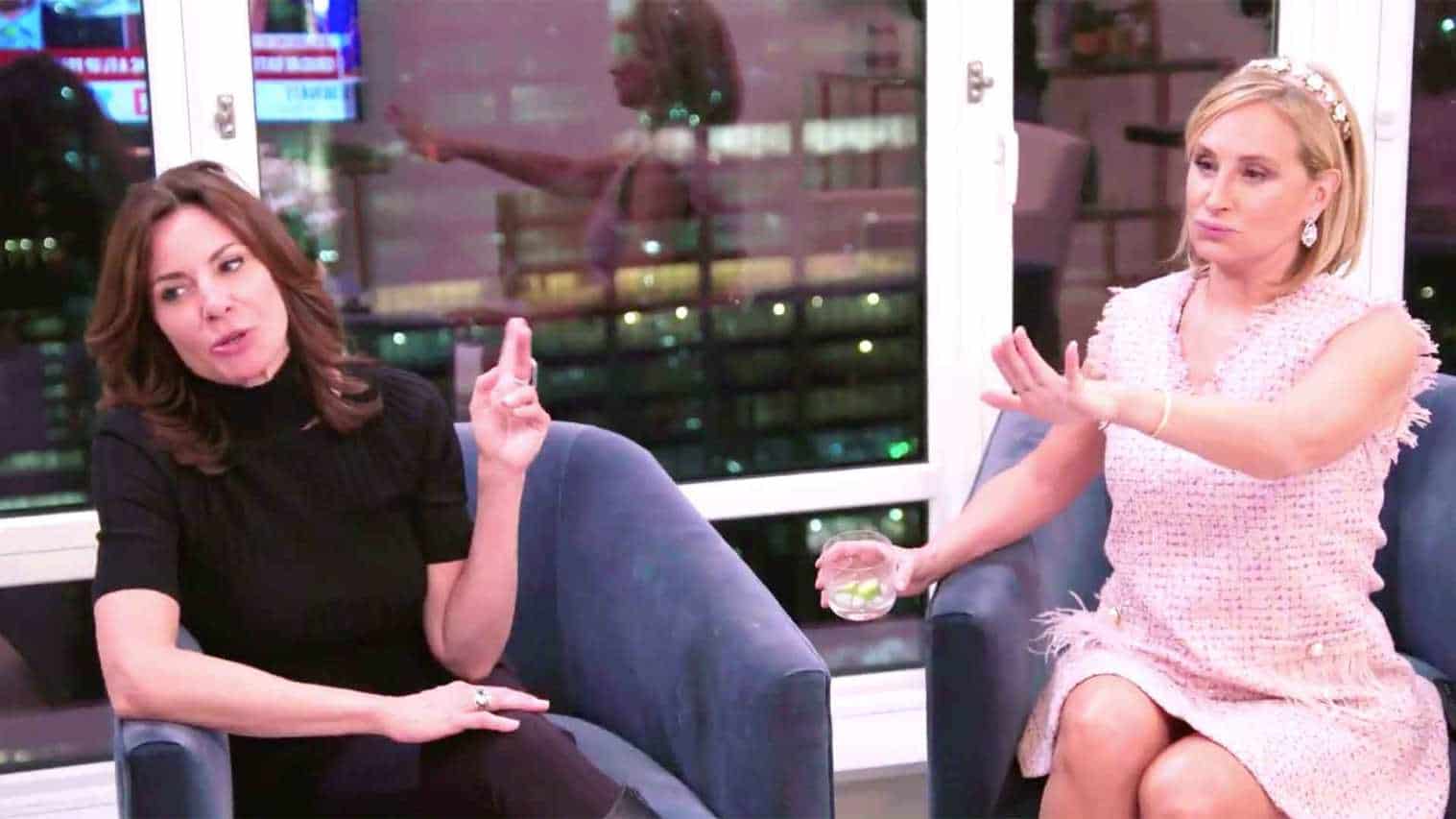 Our ladies from The Real Housewives of New York City are finally winding up their Hamptons trip this week. Let’s watch their campy pageant and see how they respond to the election. FIRST, take a BIG gulp of your cocktails so we can all tolerate Leah this episode, shall we?

Leah runs into the house waving her hands like she should be the mime. Heather comes into the house to tell Leah she won’t allow her to scare her off that easily. She has the ability to be very calm but direct in letting Leah know she finds her to be a fool. Leah’s antics aren’t going to chase her off this show — not yet. Luann thinks that Heather should shut the f*ck up. Nope, wrong person to STFU!

Leah acts like she is on edge since she is SOOO upset over her grandma. She seems to be more interested in showing off her jacked-up Carrie-themed pageant dress and wasting her good neck wound.

Leah finally decides to ask what was said. Eboni admits she misspoke and Heather didn’t say she was irresponsible by not voting. Leah basically gives Heather a non-apology by blaming her sick granny instead of owning her own steaming pile of dog sh*t.

We have finally arrived at the Halloween-themed pageant contest. The ladies all have sashes to wear to do their best pageant walk. Ramona is pumping the breaks on covering up her moneymakers. She has no interest in wearing something that camouflages her cleavage. Ramona wants to put her best breast forward. Yep, she sure does, and she won’t miss an opportunity for Mario to see what he is or isn’t missing.

Luann is just owning her talent using her baton twirling skills. She shows off her ability to smize and go back in time to her pageant days.

Ramona is basically just lifting weights and showing off her guns. She then breaks out and does 40 push-ups. It is incredible that she can do that much cardio when she has so much Pinot coursing through her veins. Doesn’t she ever get dehydrated?

Leah is doing her hula hoop routine. She is basically doing nothing special. Heather does a chant for the cheer “be aggressive” routine. Leah and Eboni have to giggle rather meanly, and they think that is really an appropriate cheer for Heather.

Eboni is doing her spoken word, and she does it rather dramatically. She pontificates about how when a Black woman wins society wins in return. Eboni is definitely referring to Kamala, who she would like to be our next VP.

Sonja is freaking hilarious as a mime. She acts out “marry, shag, kill” more like you would with charades, but it is comical. Eboni is able to recognize what she is trying to act out.

The second runner-up is Eboni, and she feels she was robbed. Luann is the first runner-up, and the winner is Miss Downtown, Leah. UGH, Leah is doing the fake pageant reaction and truly seems to believe her own hype. In her ITM, Luann shares that she rigged the results so that Leah would win. Leah hilariously thinks she won fair and square. Nope, you got a pity vote. Leah decides to own her bad actions this weekend, and she thanks her friends for tolerating her .

Luann has to stop Ramona from texting Leah before she has a chance to think it through. She would never list Ramona as her emergency contact since she doesn’t deal with sensitive issues well. Ramona’s sensitivity genes have been obliterated by Pinot.

Eboni tells the ladies that she spoke with Leah. She said she consoled Leah by saying maybe it was best that she didn’t see her when she was so sick. I am sorry, but I am distracted by Ramona’s skin. She is covered with zits and that is not a good look for someone who is always promoting their skincare line on this show.

Eboni shares with the other ladies that she might have a long-lost sister named Ashley. She is being led to believe that her biological dad fathered both of them. Ashley believes Eboni is her family since her grandparents have a photo of her on their mantel. Eboni wants to delve into this and find out if she is her little sister.

Luann is pleased that Eboni is sharing something so personal with them. Ramona tries to stop Heather from interjecting but she persists. Heather wants to apologize for the mistake she made by calling Eboni articulate. Eboni explains why that comment could be offensive since some Black people don’t speak the King’s English. She actually does a really good job explaining how saying that could offend, but she didn’t think that Heather had intended to offend her.

Leah has her sister Sarah over and they talk about the loss of their grandma. Sarah thinks she looks like a whore in her funeral attire, but I am getting Wednesday Addams vibes from her. She is macabre and barely cracks a smile.

Ramona, who is SUPER competitive, is meeting up with Michael, who was on Million Dollar Listing. She wants to work with their agency. Ramona has a vision and thinks she would be a natural at this. She thinks she needs a sponsor so she can learn the ropes. Michael has to school her on appropriate phrasing. He is going to have a full-time job stopping Ramona and her unfiltered self from inserting her foot into her mouth.

Leah invites Eboni to her training session with Martin. She sobs when Eboni asks about how she is holding up. Sonja arrives and she greets Martin very warmly. She is reluctant to throw a punch since she honestly doesn’t have a mean bone in her body. Sonja does get some motivation to clock him when Martin starts calling her the names that the other ladies have used. Sonja gets her boxing groove on and lets out all of her frustrations over being pushed around by Luann and Ramona. Side note: Does Leah have a uni-boob in her ITM?

Eboni really impressed me with her boxing moves. She has got the bobbing and jabbing down pat. Leah thinks she is the bada*s, but I think Eboni could kick Leah’s a*s. We could always hope for a RHONY fight club?

Our ladies are out and about casting their ballots for the presidential election. It is good to see they all exercised their right to vote. Eboni is hoping Kamala will be our first female VP. It is sad to see the businesses having to board up because of potential riots, but I guess this is the cost of democracy.

We have now arrived at Eboni’s election-watching party to celebrate this momentous day. Leah arrives in some black outfit with some tulle randomly tacked on. John F. Kennedy comes to the party, which turns out to be our Luann. Too fun! Luann appropriately calls Leah’s outfit an election tutu.

OMG, we now have creepy Sarah. Bravo, STOP trying to make her happen. We can only take so much having to deal with her manic troll sister, Leah. We find out Ramona isn’t coming to Eboni’s since she is fearful of rioting. Ramona doesn’t fool anyone with this. She is hanging out with her 50+ conservative friends no doubt.

Leah has brought her dog Angel with her. The dog behaves just like her mother. Angel is annoying and aggressive. Who would let their dog walk across someone’s coffee table? Eboni thinks that Angel is teaching her dog Carrie some bad manners. OMG, Leah just said she dressed like Morticia Addams. See, they are both channeling the Addams family!

Eboni wants to have a night in Harlem-themed party to celebrate Black culture. She thinks it will expose the other ladies to her true spirit and she finds Harlem to be super-dope.

Sarah had gotten a text from Leah about the party attire where she thought she said to wear Satan’s glitter for Eboni’s party. She meant to say sequins and glitter. Leah is glad she cleared that up since Sarah would have looked like the white devil in Harlem. They both don’t need to wear glitter to look like white devils — their personas project it.

Ramona calls to check-in. She will come back to NYC and go to Eboni’s party. Sarah, who is constantly auditioning to be a cast member, super-randomly interjects that Ramona is a total hypocrite. Sonja then adds to the conversation and wants to speak her “truth.” She thinks Ramona is the master of manipulation. Sonja doesn’t like wearing causes like a handbag.

Sonja thinks that Ramona has been posting photos with Black women to combat the narrative that she is racist. Eboni has latched onto that big time, and you can see her wheels turning so she has another opportunity to school these ladies. Eboni feels like she has been gullible and basically deceived by Ramona. Does she know Ramona Singer?

Sonja starts ranting that she hates fake. She doesn’t like showboaters unless it is her doing it. Leah is finally recognizing how they may have empowered Sonja too much.

Luann is going to vacate the premises since Sonja has gone over the edge with her drinking. Sonja is basically just drunken rambling and everyone’s eyes are glazing over. Angel has even had enough, and she bites Leah’s nose to get her to leave. How did Eboni get stuck with Sonja? Eboni finally escorts Sonja out and downs her glass of wine to celebrate the end of this impactful night.

Next week, Victoria tells Luann that she is thankful that she is sober. Eboni has her night in Harlem party. Ramona just can’t get in touch with Eboni’s feelings over social issues. Be well, my fellow Blurbers, and see you all next week!