RHONY Recap: Ramona Refuses to Talk Politics With Eboni, Bershan Makes Her Debut and Luann Apologizes to Daughter as They Bond Over Sobriety 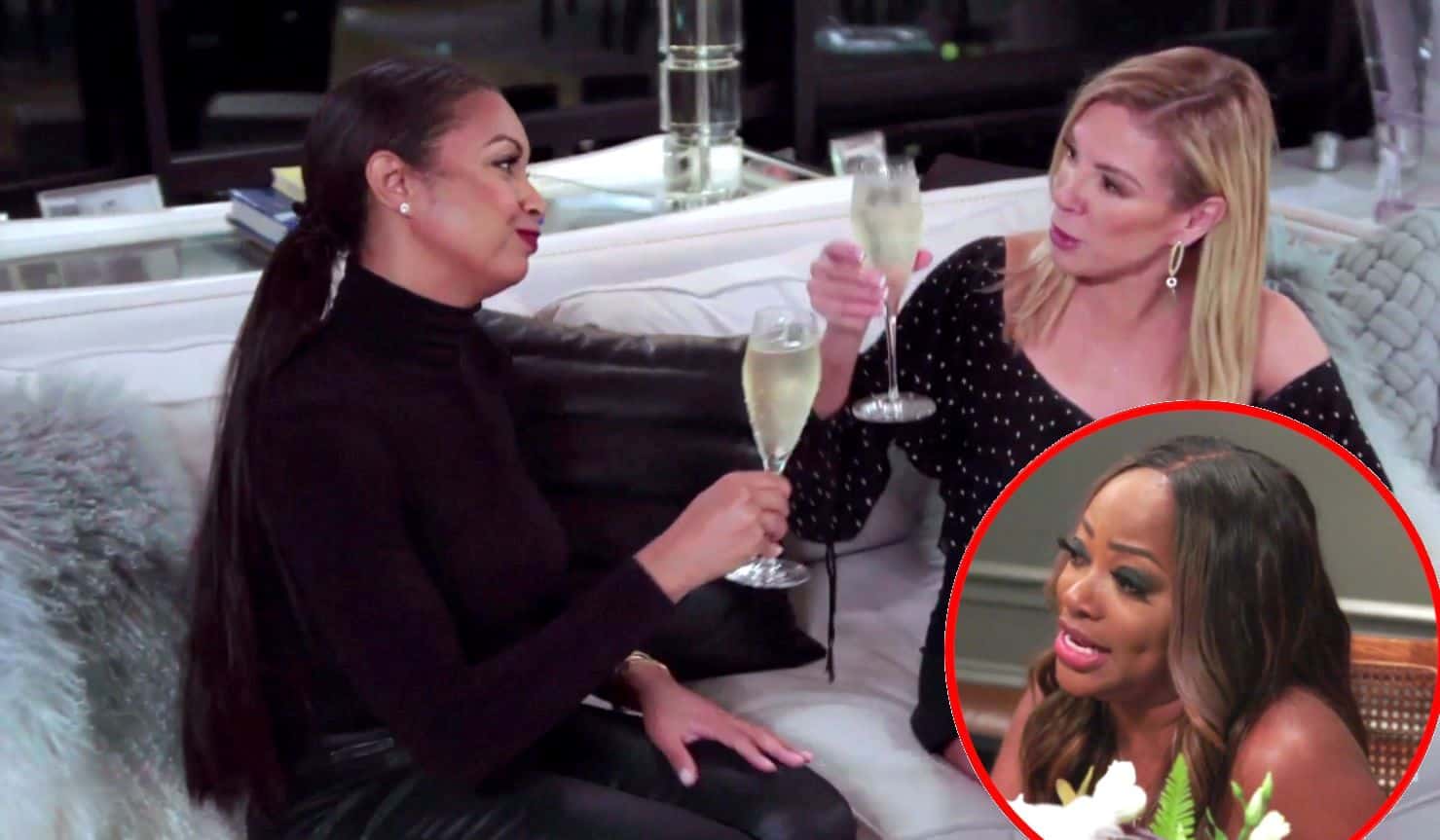 The Real Housewives of New York City are going to Eboni’s speakeasy event in Harlem. Sounds like fun, right? Sorry to disappoint! It wasn’t what I expected, but let’s make the best of it, shall we?

Hello, Blurbers! Eboni has some political and racial issue-filled baggage to unpack this week. She is trying to force-feed Ramona morsels of liberal tidbits and she is flat out refusing to swallow anything Eboni is serving. Doesn’t Eboni realize that she will have more success in getting her message out if she tries to find some common ground with these ladies first? Big collective SIGH!

Ramona picks up Bershan on the way to Eboni’s Harlem-themed night. She shares they met over the summer at a party. Come on now — production hooked up this random friendship! I am excited to get to meet Bershan so I will tolerate the production influence — this time.

Eboni — who has her girls on display — is thrilled to introduce the ladies to Harlem USA. She has planned it at a speakeasy, which I think sounds like a lot of fun. Leah is struggling coming down the stairs as is Luann — those stairs are really precarious. But like a true Countess, she handles it like a pro!

Sonja arrives with her tiara on and is admiring Eboni’s headlights. Ramona is wishing for an elevator . Bershan greets the other ladies and she seems super friendly. I am so excited to meet her and I am hoping that she will counterbalance Eboni. Eboni really needs to slow her roll since her RHONY classmates are losing interest fast, and she needs to find ways to keep them engaged and on topic.

Eboni is reflecting that they still don’t know who the president is going to be. She likes to refer to herself in the third person, and in case you didn’t know, she is Eboni K. Williams! Eboni wants a photo of the group and Ramona wants the picture to be more racially balanced. The other ladies cringe when she says that while awaiting Eboni’s reaction, but they agree on her request, so crisis averted.

Eboni is gifting everyone with a candle from the Harlem Candle Company. She is customizing them to the type of personality they have. Ugh, Sarah arrives so we have to tolerate the wet blanket for the night. Doesn’t it seem like she comes into the room with black smoke swirling around her?

Eboni plans on educating the ladies about Harlem. She thinks that she needs to share her extensive knowledge of Black history. Eboni, of course, chooses for herself Josephine Baker. Leah is given James Baldwin, who was a queer truth-teller. Hmm, that was an odd one to compare Leah to. Luann is Billie Holiday, and her little musical heart flutters at this. She is happy to have that honor, but she wants to get the party started.

Sonja is assigned Zora Neale Hurston, who is a famous writer and anthropologist. I found this one appropriate since Sonja is the historian and the protector of the Morgan letters you know!

Ramona is Duke Ellington. She picked him for Ramona since he is a leader and a composer. Ramona is totally uninterested since she is too concerned about eating. She is even stealing food off of Sonja’s plate. Sarah is Nella Larsen, who is a lesser know icon. LOL, how appropriate is that one! I hate to agree with Ramona on anything, BUT this party is a total snooze and not anything I would imagine a speakeasy would be.

Bershan feels they are all the same and we need to stop looking for ways to divide us but find common ground. Eboni isn’t feeling that sentiment and is secretly planning to reach out to production to get her voted off this housewife island. She thinks it is her mission to educate this group of ladies on Black exceptionalism. Eboni thinks that Bershan has an “All Lives Matter” vibe going on. She feels dismissed since Bershan is not following her script.

Ramona, who is obviously hungry, claims she has got to go home. She basically fibs that she has vertigo, and with Sonja’s assistance, she demonstrates her ability to act dizzy on demand.

Bershan tells Leah that she is a cancer survivor who had stage four cancer. She has a great view on life and wants to live life to the fullest. Bershan doesn’t give a f*ck about ridiculous nonsense and is no longer a people pleaser. Well, isn’t Ms. Shaw a breath of fresh air?

Bershan decides to share a story about a guy her friend is dating who has a small penis. The ladies all commiserate on how they need a man with a sizable package. See, they can find something to agree upon. Eboni, are you paying attention to how to get this group to listen?

Our next scene is with Leah and Eboni meeting up. Leah arrives looking like a schoolgirl, which is frankly ridiculous. She has barrettes in her hair and is trying to channel Cher from Clueless. “Ugh, as if!”

Leah thinks she is too cool for school, but she is more like Regina George from Mean Girls. She is catty and acts like a petulant teenager. “Leah, stop trying to make fetch and your spooky sister happen. It’s not going to happen!”

Eboni wants to know if everyone was feeling her event and had a good time. Leah recognizes that the other ladies are walking on eggshells. She acts like she is all woke and likes to get educated by her Black friends. Leah actually acknowledges that no one wants to debate Eboni.

Leah thinks the other ladies are walking through a racial landmine. Eboni says she doesn’t want to be the educator but she has appointed herself to that role. She doesn’t want to quell her power and dumb it down. Eboni recognizes that she might be a little intimidating. She thinks like she is on the payroll to teach white women about their privilege. Leah, who has a moment of clarity, thinks that a better way to get to know them would be to slow her roll.

Luann has her daughter, Victoria, over. Victoria has been sober for a year, and I was honestly rather surprised to hear that. She thinks that her mom can be a good example to the other ladies.

Victoria is thrilled that her mom is sober and it is such a gift. She refers to the time when it was “all about Tom” as “that period.” Victoria just wanted Luann to acknowledge the unhealthy behavior. Luann apologizes to Victoria for putting her “through so much hell for a long time,” and she is thankful that they are both sober during this tumultuous time in their life. Production shows lots of examples from Sonja, and they also show the notorious one from our Lu on the dangers of being overserved.

Leah and Kier are meeting with an admission consultant for high school. She is profusely gushing over her to try and get on her good side. Leah doesn’t want her mom, Bunny, to influence everything with Kier since she obviously doesn’t want her to turn out like Leah. She would prefer that Kier went to a public school instead of a private school that is full of elitists. Side note: I get that we all give our kids nicknames, but hearing Leah say “Kiki” grates on my d*ck nerve if I had one.

Leah is utilizing the admission consultant like she is her therapist. She makes this all about herself instead of her daughter. Leah thinks that Rob will be the embarrassing one? Are you freaking kidding me?

Ramona is having Eboni over to chat and to get to know her better. She wants to find out about more than just the preachy side of her. Ramona raves over how well-planned the Harlem event was and how it went down.

Eboni asks Ramona about her feelings over the election. Ramona doesn’t want to talk politics. Eboni clearly recognizes that she is poking the bear, and she is pursing her lips rather smugly. She tries to engage her by saying how empowering it is to have a female vice president since she has a daughter.

Ramona shifts the conversation to the Hamptons drama. She explains that she now understands microaggressions. Eboni has to keep steering the conversation to politics. Doesn’t she realize that when you go into someone else’s home and they say a topic is off-limits you respect it? I have friends with all sorts of beliefs and cultures but I would never enter THEIR home and ignore their request to not talk about sensitive issues. Keep it light and fluffy for this group!

Eboni is treating Ramona like a cat would a mouse by toying with it. She knows she can outwit her. Eboni is relishing the moments when she can force Ramona into that proverbial corner and attack the conservative out of her.

Ramona thinks the election results are delayed over the mail-in ballots, not that the nation is divided. Eboni isn’t letting that one go.

Ramona leaves the room since she doesn’t want Eboni’s political beliefs rammed down her throat. Eboni thinks that she can bond with Ramona over common values. Ramona has no interest in having tough conversations. She doesn’t want to talk about race, religion, or creed. Ramona lets Eboni know that the other ladies don’t appreciate being lectured either.

Eboni doesn’t have the privilege of not being Black and can’t escape her Blackness. Ramona thinks that she is picking on her for no reason. Eboni brings up the picture that Sonja insinuated was posted with her to show she is racially inclusive. She wants a relationship that doesn’t have a no-fly zone. Ramona keeps hugging Eboni, trying to shut her up. She resorts to motorboating Eboni to try to shut this uncomfortable conversation down. PHEW, crisis averted for these two strong personalities — for now.

Next week, they are headed to Salem, and Leah is being her typical bitchy self. I hope you all are doing great, and see you next week!