RHONY Recap: Leah Tells Ramona to Shut the F*ck Up, Eboni Argues With Ramona Over Race Conversation and Sonja Meets a Matchmaker 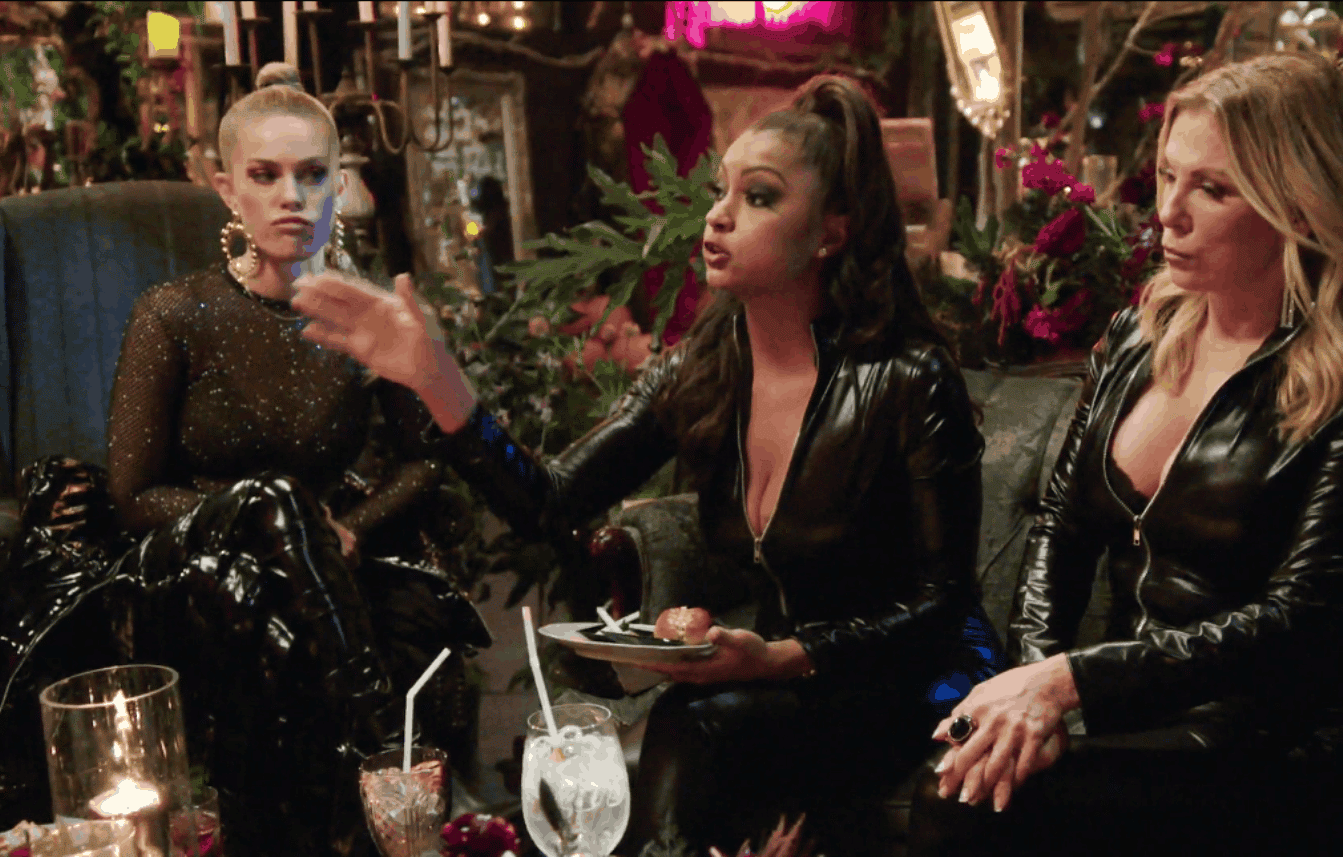 The Real Housewives of New York City are headed to Salem this week to supposedly escape the political climate of the election. Leah, with tons of production influence, has planned it. By the end of it, they will need to find the exit door of this politically charged escape room. Will our RHONY ladies, specifically Ramona, find the escape door? Let’s watch and see.

This episode really reminded me of being a kid and your parents needing something to threaten you with. My parents saying, “I am going to send you to military school!” basically stopped working. Does everyone remember that show Scared Straight? I do VERY vividly. This episode really brought me back to the fear I had back then of being sent somewhere basically to be broken down and reprogrammed. Sorry, I went off on a bit of a tangent there, but I was triggered by that episode.

Let’s get on with the episode, but EGADS, we have to be tortured with Leah in our opening scenes. Leah has taken over my beloved franchise and it sickens me. I really needed to get that off of my chest, too.

Leah decides to organize a trip to Salem and wants to restore some sanity because of the election. She is definitely on-brand with this locale, but spending five days together? Leah wants a latex and leather-themed attire. She thinks she has a kindred sex spirit with Bershan since they are both sex-positive. Leah really just wants someone around to talk about d*cks with who happens to be Black so she can maintain her “woke” image.

Ramona and Bershan meet up to discuss Eboni’s event. She is trying to pull out of Bershan that she didn’t appreciate Eboni’s hard sell. Bershan thinks Eboni had good intentions but she needs to lighten up. She should have said that Eboni’s pontificating turned her into Charlie Brown’s teacher and all they heard was, “Wah, wah, wah, wuh-wah.”

Ramona warns Bershan that these ladies fight like b*tches in hell. She actually admits that her other friends are superficial and this group is her core. Ramona, so you really don’t have 50 close best friends? Phew, glad you cleared that up. I thought I was slacking on my friend game.

Sonja and Eboni are on their way to meet up with a matchmaker in Philadelphia. She thinks that they are two kindred spirits. Sonja is claiming the other ladies feel that she is too preachy. She thinks that their relationship is going to be an experiment. Eboni is going to try to keep things light in Salem and less lecturing. Hmm, sure you will, Miss Eboni K. Williams!

Sonja gets introduced to the matchmaker, Devyn. She shares that she is a philanthropist to the vulnerable. Sonja tries to say that the finer things in life don’t matter too much to her. She, obviously, has no age parameters. Devyn has a guy in mind who would be perfect for Sonja.

Luann is packing for her trip. She gets upset when her assistant puts her hats on the bed. Luann tells her it is bad luck to do that. Who knew?

Leah tells Sonja and Eboni that she wants to get spooky and conduct a séance. What the heck are these crazy b*tches going to conjure up?

Leah, who is in a pink tracksuit, acts like she planned a tour bus for this group. She decides to climb into one of the little bunks and hopefully sleep the entire time.

Bershan shares her story about her married life and how cancer came knocking on her door. She was diagnosed before she got married to a British banker. Bershan has been cancer-free for 13 years and she has no tolerance for nonsense. Now, why can’t Eboni open up like this and help us to get to know her as well?

The ladies arrive at the Hawthorne Hotel, which I find to be a rather controversial choice since Nathaniel Hawthorne was a promotor of white supremacy. Eboni must not have done her homework or created flashcards about this place. They are all wearing these plastic face shields that look like post-surgical masks after having a facelift. It appears like they are all wearing them incorrectly with their noses hanging out or their mouths exposed.

The guide shares the history of the hotel, where 20 people were killed. Bershan is concerned now since the Black person is the first to get killed in horror movies. The spiritual guides have these chants that they are doing, which are rather spooky. Leah is worried the other ladies are going to get her thrown out of Salem?

Ramona got the most haunted room, and she couldn’t care less since she thinks it must be the best room then. She might have to play footsies with a ghost, but that is nothing that Ramona can’t handle. Ramona is already trying to get special treatment. Who doesn’t have to pay extra for room service?

The countess isn’t taking any chances and sages her room. She is hopeful that she might get some lucky spirit action. Remember that movie called the Entity? Luann better watch out — that was some freaky sh*t in that movie and scared the bejesus out of me!

Leah looks horrible in her puffed hefty bag getup. Eboni does a much better job pulling off this look and looks super sexy in her outfit. She starts twerking and Sonja hilariously calls it “tweaking.”

Luann was funny when she showed concern over having dinner in a tattoo parlor. She knows that this isn’t proper etiquette for a countess since she has several chapters on this topic in her book! How déclassé is that?

Leah is already giving herself an A+ for this trip. Luann is lecherous over the fortune teller and his very large hands. Sonja is hitting on the semi-spooky twins. Why does she need a matchmaker when she would get two-for-one in this deal!

Sonja starts running her mouth and stirring the cauldron. She basically sells out the other ladies but doesn’t take ownership of what she said.

Eboni is pursing her lips again, and we all know what happens when she does that. She has the right to free speech, but the other ladies need to zip it.

Eboni refuses to kiki with anyone who is a white supremacist. She calls Ramona out on how she won’t talk about the current issues. There are no blurred lines for her between racist or anti-racist.

Leah thinks that the ladies are targeting Eboni since she is a newbie. She decides to blame them instead of casting for not having Black women on this show. Leah screams at Ramona, “Shut the f*ck up!” She then further berates her by saying, “You’re a moron and you are what is wrong with this world!” She doesn’t even allow Ramona to speak and defend herself. Ramona is probably thinking that this is why she won’t talk politics with this group.

Eboni calls Ramona ignorant since she won’t participate in these heavy conversations. Bershan tells Eboni that she is coming across as too much. She doesn’t want Eboni speaking for her. Eboni, darling, you are frankly exhausting and have sucked all of the fun energy out of the room.

Eboni then asserts that these ladies might be aligned with white supremacy. Luann and Ramona hear that and shut down. They want no part of that label. Eboni needs to realize that each step she THINKS they have made forward is really 10 steps back. Ramona then says, “Am I supposed to apologize for being white?” She further defends herself by saying, “My mother was an immigrant and came here with nothing.”

Eboni then discloses that her mom voted for Trump in 2016, and she still talks to her? Ramona hears this, and you can almost hear a huge sigh of relief, but Eboni is not done yet! Ramona keeps jumping up and down trying to get them to play some games, but no one is reaching for that Parcheesi game yet! She gets no takers then decides to exit stage left –again.

Eboni thinks that Bershan has a different approach. Yep, she sure does, and it is most definitely more effective than what you are doing. Bershan is trying to find common ground and find ways to unite rather than divide the group.

Leah thinks that Ramona can’t have these conversations since she hasn’t mastered the English language. She needs to recognize that this whole trip thus far has been a total disaster and we haven’t even slept with the ghosts yet! We then have another to-be-continued…

Next week, we are still in Salem and things are getting heated again. Bershan thinks the ladies are acting like a bunch of grandmas. Give them time, Bershan, they know how to get turnt up! I hope everyone is well, and see you all next week!