Home Recaps RHONY Recap: Leah Argues With Luann Over Proceeds of Holiday Song, Eboni Connects With Her Potential Sister, Plus Ramona and Sonja Celebrate Their Birthday 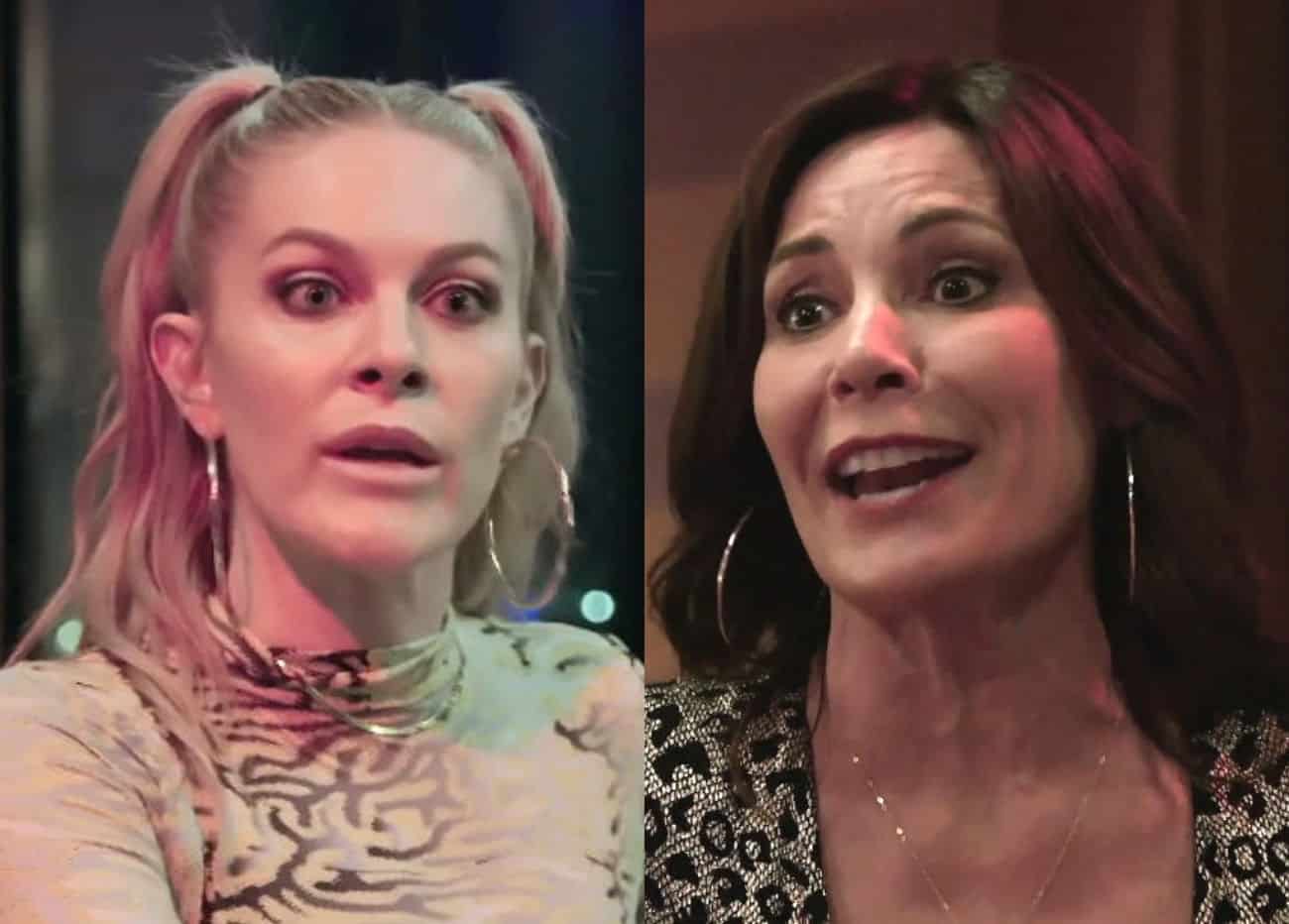 The Real Housewives of New York are back from Salem, but they may have brought back some witches (Leah) and evil spirits. Let’s tune in to see how they celebrate Ramona’s birthday month and how Leah can turn a charity opportunity into a convoluted mess, shall we?

Sonja and Eboni are working with our tough-love trainer, Martin. Eboni tells Martin that she is 37 and he thinks she is much younger. She is officially in love with Martin since he even knows a way to a woman’s heart is by saying you look so young! Sonja vents to Martin that the ladies are unfairly targeting her and calling her b*tchy. She, of course, is totally misrepresenting what they were trying to do.

I think we have found our solution for Sonja! Martin should take Sonja under his very large wing and put her through a tough love/scared straight camp! He can keep her off the hooch while scaring the crazy out of her! #problemsolved

Eboni asks Sonja about her parents’ relationship. Sonja’s dad was a total player (no surprise there), and Martin diagnoses her dad as a total d*ck. Sonja is happy that her dad allegedly showed up for the séance since he wasn’t emotionally available for her in life. Martin thinks that Sonja needed her life experience to grow. He doesn’t realize, though, that the direction she grew in may have been lucrative but didn’t include addressing her daddy issues. Sonja searched for a father figure in adulthood and decided to marry a very old, albeit wealthy, one.

Eboni shares with Sonja that she is going to FaceTime with Ashley. They are going to find out together if they are truly biological siblings. Eboni is finally going to show us a part of her life that will now help us to connect with her. She is now saying that this part of the season will take us on an emotional journey with her to find her dad.

Ramona visits Luann and she wishes her happy birthday — again. Doesn’t it seem like we were just at her birthday party for 50 close friends? Ramona is allowing Luann to plan this shindig and there won’t be 50 friends there. Luann is going to include Sonja since it is her birthday too. She wants to record a Christmas song with her friends and donate the proceeds to the Fortune Society. Luann won’t miss an opportunity to entertain, but that is a worthy cause and I like seeing our ladies give back. Side note: I think Luann misses doing her Cabaret shows due to COVID more than drinking — just saying.

Luann and Ramona chat about the séance and all the feelings that were brought out. Ramona is afraid that she can’t help Sonja just like she couldn’t help her brother. She thinks that Sonja needs to deal with some serious unresolved issues from her past. Luann is concerned that the hotel guests could have called the cops on her. She knows what can happen when you act like a sloppy drunk at a hotel and end up in a strange man’s room. Luann is scared to death for Sonja and concerned that she is going down a very dangerous path.

Eboni gets a call from Ashley, who could be her sister. She is awaiting DNA results to see if they are biological siblings. Ashley’s father is Kenneth, and it is possible he might be Eboni’s biological dad. Eboni wants to find out if she has family members that she wasn’t aware of. She has lost her grandma and she has a desire to find connections to other family members.

Luann is visiting the venue for Ramona and Sonja’s party. Leah joins Lu since that woman can’t miss an opportunity to be on camera. Luann wants to keep it classy but still add some edge with some hot guys. She wants to have more of a burlesque style than just strippers. Leah would prefer the down and dirty theme — no surprise there.

Leah wants to know if they need to sign a contract to sing ONE LINE in the Christmas song. Luann loses any credibility when she mentions Lisa Rinna recorded “Feeling Jovani” with her. UGH, Lu, I would have kept that one close to my vest. #lessrinnaismore

Luann and Garth aren’t hooking up anymore and she acts rather nonchalant about it. She needs to put a tracker on Sonja since you know she loves to swoop in and steal Luann’s guys.

Luann, who looks super-fab in her blouse, is getting ready to record the Christmas song. She is doing the recording in her apartment. Ramona arrives to record her part, so this should be interesting. Luann is thankful that auto-tune is available.

Leah arrives looking like she just got out of bed and is still wearing her leopard pajamas. She needed to consult with her lawyer before recording this track. Luann is mortified that Leah is questioning her integrity in front of the producer and sound technician. Leah selfishly thinks that this is going to bring in some cash, but Luann is donating the money to Fortune. Has Leah heard any housewives’ songs that have made serious bank and have gotten Grammy awards?

Leah is worried about protecting herself now. Are you kidding me? Leah should have stayed home with her arrogant self. She can’t see that this is a contribution to charity. All she must spit out is “but what do I want for Christmas — just you!”

I love the shot of the Christmas tree in NYC! We have arrived at the big party, and Bershan has joined us. Sonja is already a little touchy about the drinking. She doesn’t want to drink since they will judge her for it.

Sonja greets Kurt (the nude model from the Hamptons with the chubby penis), and she is salivating at the memory of his naked body. The other ladies are all googly over him. Eboni has the recollection of him having a flaccid penis but a nice chubby one.

Dylan, the clothed model, is also there and is a cutie. These ladies are LOVING the eye candy in this room. Ramona has met Dylan from some “people,” but she won’t specify who those people were. I must comment on the subtitles of these guys — like we wouldn’t remember who was clothed or not!

We then step out on the terrace and Bershan is asking Kurt if he ever gets inappropriately touched. He kind of plays it off like it is no big deal. Eboni and Leah then decide to discuss vulvas.

Kurt seems to know how to find his way around a vulva. He must explain to these two what a vulva is. Leah, who talks about sex organs all the time, has to stupidly Google what a vulva is! Our vulva is simply our external female organs, and it is embarrassing for them that a nude model has more intimate knowledge of that!

Eboni wants to invite the ladies to Black Shabbat dinner. Ramona doesn’t understand why it is called a Black Shabbat — me either. She tells her it is because she is inviting Black women who have been oppressed, plus she is sprinkling in others who are just Jewish.  For some reason, Bershan doesn’t get an invite? Bershan, in her ITM, would have called out sick for Eboni’s school project on Harlem nights if she had known it would have been a total bore. She saw how Eboni throws a party and she has no desire to watch her pontificate while on her preaching pulpit.

Luann and Leah disagree about making the recording a legal issue. Leah brings up not paying Sonja for the cabaret act, and we all saw how much that brought in. She just wasted money on legal fees to be told that she needs to sign a release. Leah is still going on about needing a lawyer to record a Christmas track for charity? Luann is all, “Lawyer up, baby!”

Leah acts like she is all that since Rihanna is wearing her clothes. She needs to sit her skanky self down and stop being such an attention wh*re. Leah ordered a penis/vagina cake to continue to push Ramona’s buttons. Ramona cuddles up to Will when she is walking out, and she whispers to him that she will text him her address. Now THAT scene is the RHONY that I have grown to love over the years! Hot mic-drop!

Next week, we are filming the music video and Sonja is still up to no good. Eboni will be getting the DNA results. Thank you all for reading my recap of RHONY, and see you all next week!