RHONY Recap: Sonja Goes Off On Ramona and Pees in Driveway, Plus Eboni Discovers Identity of Her Birth Father 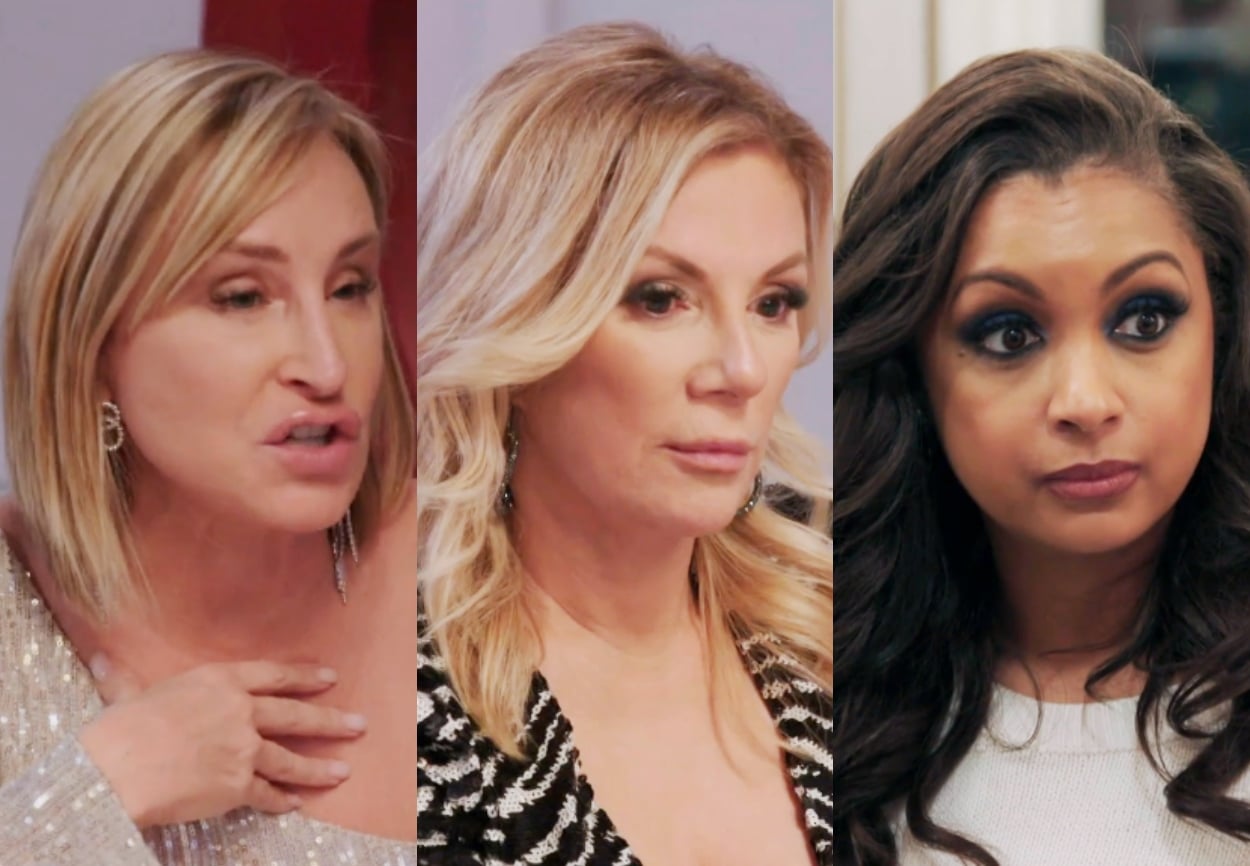 The Real Housewives of New York City are back this week to show more disrespect to Jewish traditions. Ramona and Sonja face off again, and Eboni finally can identify her biological dad! Let us watch the RHONY train go off the track and hope for no fatalities, shall we?

I must first comment on RHONY being potentially put on a permanent hiatus along with RHOM and RHOD. Bravo is now recognizing how polarizing their shows have become. The truth is their sponsors have threatened to pull their funding since viewership has dramatically decreased. Will Bravo finally listen and stop casting housewives who do not have any organic connection to the current cast? Time will tell.

We are back at the horrifically disrespectful Shabbat dinner where all the traditions are being tossed out the door. They are being stomped on like Sonja’s mirror dance. Eboni is still on the phone with Leah venting on how disgusted she is over the other ladies’ behavior. Luann is looking for her purse since she just cannot stand being associated with this group of ladies

Ramona is grabbing plates in the kitchen and going on a diatribe to the chef about not knowing when to call people he/she/they/them. She does acknowledge that when she has no food in her mouth, she inserts her foot.

Eboni tries to put this crazy train back on track and save any dignity she might still have. Archie valiantly tries to shift the conversation back to the true meaning of this dinner. She explains it concisely and says it is about human values and soul searching. Ramona then pivots again and admits to Eboni that she had a meltdown since she was hangry. Sonja is getting plowed, and not in the sexual way, after drinking excessively, and she is downing the tequila like she is stuck in the desert.

We now venture into the question of the day! Ramona is not playing that game since she wants to continue to monopolize the conversation. Has she totally forgotten what was on the production schedule for tonight?

Sonja is now answering one of the questions of the day. What makes her heartbeat? Sonja starts going on some bizarre rant about all the charity work she has done. Ramona tries to stop her blabbering mouth and she gets shushed. Sonja will not allow Ramona to stop her from talking. She starts bizarrely screaming and banging her fists on the table. Sonja is making the challah pop out of its breadbasket!

Sonja wants Ramona to stop social climbing and looking for the next plane or boat. Ramona just waits out the drunken rant and allows her to ramble on. Haven’t we all been there when someone is toasted and they are losing their sh*t? I just stare off into space and ask God when is this nut job going to pass out? Eboni is now guzzling her cocktail while being mortified at her pet project Sonja’s behavior. Archie looks like she wants to call 911 and get this kook Baker acted. She is perplexed at what she just witnessed.

Sonja thankfully storms off and Luann goes after her to try to calm her down. Eboni declares that they are doing a time out on the white people. Ramona thinks that this is offensive and a form of segregation. Can this get any worse?

Brian grabs the reins on this crazy horse and gives the floor to Linara. She tries to participate in the exercise and Ramona keeps interrupting her. Linara described where she was discriminated against while prematurely delivering her baby. She has the patience of a saint when Ramona interrogates her. Linara describes how the doctors assumed she was a drug addict and just wanted pain medicine.

Ramona shares that she had a Black nurse while delivering Avery and she was discriminated against too! She was not given pain medicine when she demanded it either, so she thinks she is empathizing with Linara. Eboni cannot take it any longer and she tries to get her to shut up. She tells Ramona she does not appreciate her adversarial approach with her friend. Archie chimes in to help put out this dumpster fire and says Linara showed a lot of grace telling her story. Eboni lets everyone know that, if they do not want to participate, she is all, Bye, Felicia!

Ramona decides to leave, and she breaks the fourth wall and demands that one of the producers call her an Uber. She decides to come back to the table and continues to stir the pot. Production keeps giving countless examples showing Ramona’s intolerable behavior. I swear some part of me wonders if production went back to the editing process at the end of this season and aired everything they could find to trash Ramona.

Ramona and Sonja awkwardly hug it out and apologize to each other. They are both grabbing a*s and Luann looks like she might vomit at this bizarre spectacle. Brian is intensely looking at Eboni like he wishes he had not taken Eboni’s call for this sh*tshow.

The next day, Luann visits Ramona at her apartment to rehash the dinner from hell. She wants Ramona to recognize how her own behavior was beyond offensive. Luann calls her out on being rude. Ramona tries to say she was overserved and the snacks on the table were insufficient. She shares that she called Eboni and expressed her sorrow for her behavior. Ramon attributes her unruly behavior to drinking on an empty stomach.

Sonja is now having Eboni over to chat about the disastrous evening. She says that you do not act like that in a mixed company. Did she really refer to Eboni’s friends as “mixed?” Eboni totally glosses over what Sonja said and should have been called out on, just like the comment in the Hamptons about “my people.”

Eboni thinks that Martin has created a monster. She wants Sonja to stand up for herself and still have some social graces. YIKES, Eboni tells Sonja that she needs to call her out over peeing behind the bus in Archie’s driveway. Sonja justifies that she has done this before and it is no big deal????‍♀️! She probably has done a lot worse on her drunken nights stumbling around the city.

Luann calls Leah, who is still on lockdown. How nice is it we do not have to see her this episode until 9:37? Leah is so much more tolerable living in Eboni’s phone.

Luann has invited her Fortune Society group to dinner along with Eboni and Ramona. Sonja could not come since she is plunging toilets with her intern who does not wear pants. She is making poop soup, and like clockwork, her cuckoo clock is going off.

Christina from the Fortune Society tells her story about being charged with conspiracy after witnessing a shooting where the victim died. She ended up on Rikers Island, and Ramona starts interrogating this girl about her actions. Christina mentions how she was held for an extensive amount of time without a court hearing. She ended up pleading guilty so she could be released.

Ramona decides to change the conversation AGAIN after hearing that young woman’s story and wants to know, “What do you do when a friend is going down a rabbit hole?” Christina thinks the friend (Sonja) is numbing her feelings and acting out inappropriately.

Eboni determines that she and Ramona are alike. In her ITM, Luann looks like she is flabbergasted. She can only see a similarity in body type. Ramona thinks Luann is “mind depth.” Luann is incredulously trying to decipher WTF that even means.

Leah finally gets to see Kier and her ex-husband Rob after being quarantined for two weeks. They discuss Kier’s education and the cost of high school being the same as college. Leah claims to be working so hard to be able to pay for Kier’s education. Does she want a medal since she is doing what any mother is expected to do? Rob then leaves escapes Leah’s clutches and tells Kier to watch out for her mom. Yep, that is a full-time job for that child.

Leah is acting like she has made the ultimate sacrifice by putting her daughter first. She obviously has not put her first by doing this show. Leah has been doing (destroying property while naked) and saying horrifically embarrassing things (real men eat a*s for one) to mortify her young daughter.

Side note: I think Kier is a beautiful name and she is also a lovely young girl — despite her mother. Leah suggested to her followers that I was making fun of her teenage daughter. I said hearing Leah’s voice bleating out “Kiki” wears on my nerves. Leah distorted that comment to her followers and said I was “making fun” of a 14-year-old girl. Let me be clear, I do not “make fun” of people’s children in my blog — PERIOD. I feel for the children on these shows since they did not sign up for this nonsense. Sorry, I had to get that part of Leah’s attack on me out of my system. Thank you again for letting me vent!

Eboni receives her grandma Katie’s ashes and places them on her mantel. She is having Linda come over to discuss the results of her genetic research. I mentioned CeCe Moore from the show Genetic Detective last week, and she commented on my blog! Sorry, I digress, but I had a fangirl moment. Back to Eboni finally finding out who her dad is! Linda has found a link and there is a possibility it is one of three brothers. Linda has narrowed it down by age to one man! Eboni’s biological dad is married and has two daughters. Linda says the youngest sister resembles Eboni. Eboni is emotional hearing that she has sisters and a dad who could potentially be in her life. Cheers to a year of renewal!

Next week, Leah is getting schooled by her parents — again. Let me know your thoughts on the cancellation of my beloved RHONY. Have a fantabulous week, and see you next week!