Home Real Housewives Of Salt Lake City News RHOSLC Recap: Meredith Lashes Out at Jen Over Homophobic Tweets About Brooks and Jennie Opens Up About Her 9 Miscarriages

RHOSLC Recap: Meredith Lashes Out at Jen Over Homophobic Tweets About Brooks and Jennie Opens Up About Her 9 Miscarriages 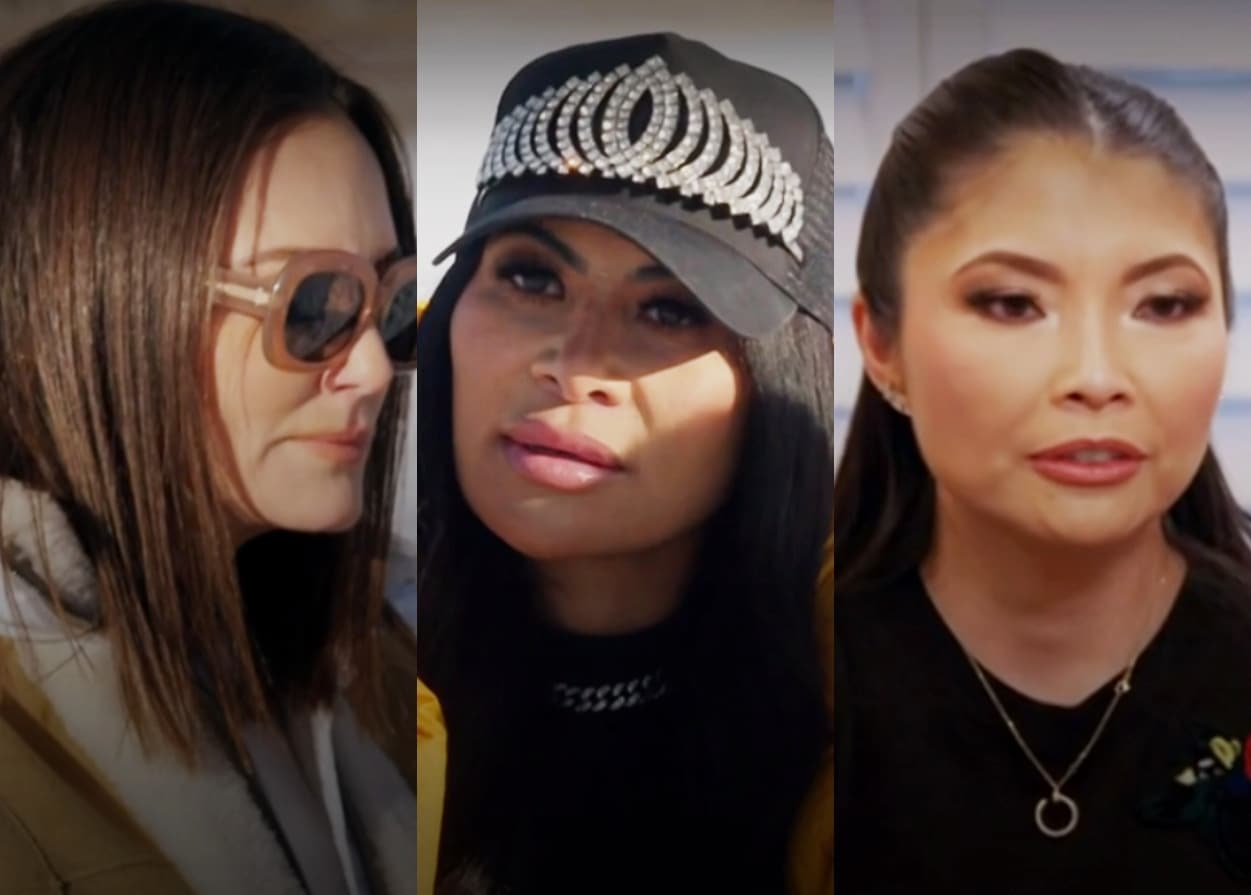 On this episode of The Real Housewives Of Salt Lake City, even though Jen tries to break the ice, she falls flat when she continues to project, deflect, and lie. Will things ever be okay between her and Meredith?

Heather is thinking about expanding Beauty Lab, and she claims that Zoom calls have dramatically increased her business. I can attest that those meetings have certainly made me think about my wrinkles!

In the meantime, Heather FaceTimes Whitney and fills her in on her Jen meet-up.  She states that she is now best friends with Jen again (eye roll), but Whitney is unsure if she can fix her awkward relationship with Jen after all she has said and done.

Speaking of Jen, she is Sno-Going (aka ski-biking) with Lisa and another friend. Post ski-biking, Lisa and Jen grab some cocoa and chat. Jen shares that Sharrieff is back to being busy again, and she is grateful since all he has been doing lately is tinkering around the house. Jen explains that she is planning an adventure outing with all the girls and states that they will be ice fishing. Therefore, she needs everyone’s personal stats. If you need to know my weight for ANY activity, count me out. Also, is Jen planning on stealing their identities? Sheesh, with all the details…

Jen has decided to invite Whitney and Meredith to ice fishing even though things are not great between them. Jen wants Meredith, in particular, to get over their issues. In Jen’s mind, if she can fix things with Heather, she can certainly make things better with Meredith.

Mary is out and about with her son, Robert, Jr. She picks on him for losing all his table manners, and she wants to know if there is any truth in the rumor that he wants to move out. Mary asks if her son would like to join the army in hopes of giving him a kick in the pants to get motivated. She basically begs him to enlist, because there he will DEF learn how to eat a grilled cheese properly.

Over at Jennie’s house, it’s another segment of her kids carrying the scene… particularly her daughter. They are working on science experiments, and as her children clean up, Jennie and her husband sit down to talk about having more kids. Jennie is deadset on the shop being closed, but Duy is adamant. Jennie shares that after nine miscarriages and three C-sections, it is a dangerous choice for her to even think about. It is uncomfortable to watch him beg Jennie, quite frankly.

Heather talks about her daughter’s senior showcase and what a big deal it truly is. Heather keeps saying how she wants her daughter, Ashley, to “be wild” and make mistakes upon graduation. Ashley states that she will probably never go back to the Mormon church while away at college, and Heather’s other daughters discuss how torn they are about the Mormon church. They feel as though it is too late to go back to it, but Heather promises to support them, no matter what.

Meredith has decided to invite a few of her friends over to preview some of the couture pieces that she will debut in her store. Mary is not a fan of Meredith’s style, but she is there to support her and view the looks. Mary sits down with Brooks since Brooks has found “a lot of comfort in Mary” over the past year. When Mary hears all that Jen has been doing on social media, she asks Meredith if she thinks calling her would make a difference.

Meredith states that it “doesn’t sit right” with her to enjoy the ice-fishing outing with all of this going on, but Mary states that Meredith can stop all the nonsense by attending and confronting Jen. Mary proceeds to cut Brooks off mid-conversation because, “I need peace and quiet to fart” …and that’s what talking about Jen Shah makes her do.

Jen and her assistant, Stuart, are setting up an ice fishing competition at Echo Lake. Heather and Whitney carpool over to the lake, and Whitney comes prepared with a life jacket. Last year, Jen threatened to drown Whitney, so now she is ready. This outing seems like Jen is trying to get back into everyone’s good graces, but it’s def making the ladies wonder how it’s going to turn out.

Lisa and Jennie are heading over together, and poor Jennie is just stuck hearing all of the drama. They discuss the Meredith/Jen issues, and they wonder if Meredith will be attending. Jennie hopes that Meredith stops icing Jen out so they can all move on, but time will tell.

Whitney and Jen hug it out right off the bat since Jen is now “Zen Jen.” She isn’t trying to drown anyone (or so she says). But when Lisa hugs Whitney, it is straight shocking. Not only is Lisa surprising people with hugs, but the woman who has zero experience fishing or cooking is catching trout!

Out of the corner of their eye, the women spot Meredith walking up.  This is surprising, considering they all figured that Meredith was not attending due to the battle currently occurring between Meredith and Jen. Seems like an awful lot of work on Meredith’s part to try and make things better with Jen, huh?

Meredith, I am with you. Why are these women running like crazy shouting “trout?” Meredith explains she has “bigger fish to fry” with Jen, and she has hopes of having a serious conversation with her once she is given the opportunity to discuss the issues at hand.

When Jen and Meredith have the chance to talk, Meredith explains that some “stuff has been festering,” and she needs Jen to stop speaking poorly about her family. Jen has liked homophobic tweets about her son’s sexuality, and Meredith does not appreciate the pain Jen has caused Brooks. Jen asks Meredith, “What about you talking about?” She also denies liking anything about Brooks. Meredith whips out her phone and shows Jen the receipts. Jen claims that she has someone who runs her Twitter account, and if that is true, then she better fire that person immediately as he or she is making her look like a jerk.

When Jen continues to “project, deflect, and lie,” Meredith flips her sh*t. She storms off, and even Lisa can’t contain her from disengaging. New girl Jennie is just here for a good time, and she is not having this drama. Jennie storms over and reminds Meredith that she, too, has someone running her Twitter.

Jen doesn’t like that Lisa is trying to help Meredith, and it just goes to show you how messed up Jen’s priorities are. She is more concerned about who Lisa is defending than about fixing a broken relationship. Jennie steps in as mediator and shouts, “Shut the f*ck up and listen to each other. The damage is done.” Meredith is enraged, and in typical Jen fashion, she blurts out, “How do you think my kids feel when Brooks goes out there?” She then talks about her vagina? Meredith shouts she is finished with Jen as Jen cannot seem to see beyond herself and acknowledge what she does wrong.  Ever.