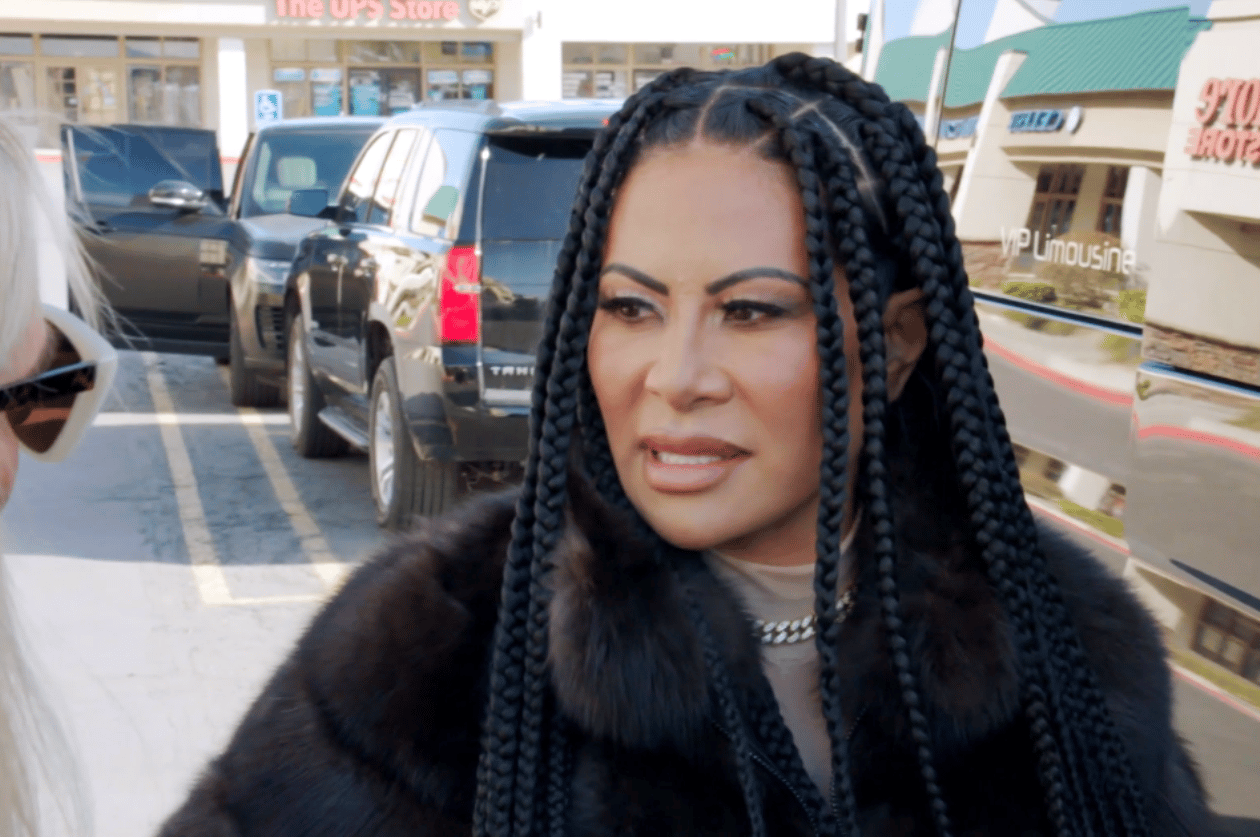 On this episode of The Real Housewives Of Salt Lake City, the last 10 minutes will leave you on the edge of your seat. Jen spins a tale that blows Erika Girardi out of the water and gets the hell out of that strip mall parking lot before the feds can make an arrest. But before that, there are other hurdles and issues to work through…

Mary has decided to host an Italian cooking class and asks the ladies to come dressed in Italian streetwear… since she doesn’t believe that this group of women can bring it with their fashion. Mary explains that she doesn’t “care” for Jennie since their argument during snow tubing, therefore, she did not invite her. Mary is also annoyed that Whitney did not pick up when she called, and she promises to show Whitney that was a mistake…

Meredith invites Jennie over for an in-home manicure and pedicure, which is a real treat for Jennie since she needs a break from her kids and her pushy husband, Duy. Meredith extends the Vail house invitation to Jennie, and Jennie explains that she hasn’t talked to Mary since the tubing incident.

It’s Heather’s niece’s birthday, and so Heather and her daughter, Ashley, dine with her to celebrate. It turns out that her niece has recently decided that she no longer wants to be a practicing Mormon and she talks about how awkward it was trying to be “openly defiant.” It was only about four to five months ago that her niece started having doubts, but she explains that lockdown gave her a chance to discuss Mormon doctrines.

Heather’s niece believes the Mormon church should be “leading social change,” but she feels as though she is “off the hook” now with the doctrines. Heather explains that when she was a practicing Mormon, she looked down on others who did not follow the religion, but now she toasts to being a second-class citizen in the eyes of some.

“We’re making new memories together,” Jen says to her assistant, Stuart. They are preparing to go snowshoeing, and Jen talks about how her therapist has told her to spend quality time with people she loves (aka Stuart). They begin to talk about kids. Jen explains that she couldn’t be with her children while she sacrificed family time to be a working mom. Jen tells us that “a lot of families wouldn’t be eating right now” if not for her business. Jen states that lately, she has been making it her business to get closer with her son. Wow, Bravo, this whole Jen talking about Stuart segment is haunting. Jen is tooting his horn and letting Stuart know how much she loves him and appreciates *all* that he does for her.

Mary enters the culinary institute in preparation for her girls’ cooking class. Jen gets dropped off on the back of Stuart’s motorcycle wrapped in an Italian flag… why?? And Meredith looks like she is an extra in The Matrix.  Italian chic, what? Meredith is a bit uneasy seeing Mary since she had that awkward conversation with Cameron at Lisa’s event.

Mary explains that as a punishment for not answering her phone call, she told Whitney to show up in Mafia attire, and Whitney realizes on her ride over that she is getting set up by Mary. When Whitney gets to the event, Mary is more annoyed that Whitney “skipped” her joke and that Whitney actually rolled up looking relatively chic and not donning a Spirit Halloween mafioso polyester dress.

Mary’s Italian accent is borderline painful, but she grabs the “special gifts” for the crew (that, BTW, are NOT Louis Vuitton), and the girls slap on their aprons proudly. In the meantime, Jennie understands that she has not been invited to Mary’s cooking class, so instead she is hosting her own class, with her children, at her house. Take that, Mary!

During a break (so that the real chef can finish the meal), Mary won’t back off of Whitney. Whitney tries to make it clear to Mary that she was driving carpool, and Mary wants to know if Whitney drives for 24 hours straight. The reality is, Mary is so out of touch with reality, that it is impossible to explain.

The Fresh Wolf event gets brought up, and Whitney jumps in saying she was sorry she had to miss it. This sets off a chain of events where the rest of the ladies chime in. Mary states that she was not invited either, and Lisa keeps using the defense that her sons Jack and Henry made the guest list. The real question is, what did Whitney do to get on that list and what did Jen do to those boys to get left off??

Then sh*t really hits the fan, and Jen confronts Whitney. The point that Jen is trying to make is that Lisa JUST pointed out how lousy of a friend Whitney was. Evidently, Whitney was promoting the designer that Jen was fighting with, and Jen can’t wrap her mind around Lisa extending an olive branch to Whitney and not her.

Whitney is not having it and calls Lisa out. “Lisa, why did you ask her if her feelings were hurt? You’re planting a bug.” Whitney understands this is not about sending free products to her skin line but more about Lisa being Jen’s number one friend. “Why did you invite Whitney and not Jen?” Lisa sees this as another pile on and refuses to defend her children’s decisions, but after much ado, Mary calls for a toast truce and reminds them all that they will be spending lots of time together while at Vail.

Mary is dreading Jennie’s attendance at this mini vaca, and when Whitney tries to jump in and explain to Mary, Mary jumps down Whitney’s throat. Mary refers to Whitney as a “little girl” and calls it a compliment. Mary freaks out when Whitney tries to make her point heard and lashes out. She tells Whitney she can leave, but it really makes ya wonder how Mary can be seen as a spiritual guide for her congregation when she loses her cool so quickly in ridiculous situations such as this! Let this be a lesson: If Mary M. Cosby calls you, you answer that telephone… or at the very least, call her back ASAP.

The women attempt to get Mary calm, and Whitney becomes emotional explaining that she loves Mary and has always had her back.  Mary claims that Whitney appears too busy for her whenever she calls, and Meredith chases after a fleeing Whitney. Meredith tries calming Whitney down, and Whitney shares that Mary “smeared” her via text (and when Whitney reads off Mary’s text to her, my jaw is on the floor). Mary was cruel about Whitney’s looks and age, and Whitney cannot fathom how Mary has turned on her considering she backs her and even donates to her church!

At this point, Meredith feels it is necessary to fill Whitney in on her conversation with Cameron that centered around Mary’s erratic behavior. Meredith claims she has no idea what Cameron was referencing, but Whitney lets Meredith know that she was told to never make Mary mad and to be very careful around Mary. Even Mary’s cousins and congregation believe Mary to be God, according to Whitney. After hearing all of this, Meredith promises to help Whitney navigate the shake-up, but Mary is more irked that Meredith did not even get her side of the story. Mary is waaaay out there and there’s no reeling her in.

Mary claims she doesn’t get screamed at cuz she doesn’t scream at people, and she tells Whitney that she doesn’t really think she is her true friend. Whitney is tired of being Mary’s punching bag and minion, so it may be over for their relationship.

Three days later, it’s time to get packing for Meredith’s Vail trip. It’s now on Heather to hold down the fort and establish the rules with the ladies since Meredith had to attend a memorial for her father over in Aspen. While Jen packs, she considers if she should pack her “pimp” coat, and although she is only going for two days, Jen’s packing like she is moving out. #foreshadowing.

Mary will be flying private to Vail because of a bad headache, which translates to avoiding Whitney at all costs. Whitney jumps into the van with her shotski and is thrilled to find out that Mary will not be traveling with them. Jennie rolls up next, and the ladies are so excited for the trip.

Jen comes rolling deep with snacks, bags, and braids. Jen’s phone rings while waiting to head out, and she asks Whitney to turn her mic pack off as she listens intently to the call. Jen tells Heather that Sharrieff is in the hospital and has internal bleeding, so she has to leave immediately. She tells them all to carry on with the trip without her.

Jen’s calm demeanor should be a red flag in and of itself. Internal bleeding is serious AF, and she just coolly mentions it before hopping back in the car to drive off. The fact that she can just pull that lie out of her you-know-what truly proves what she is capable of spinning. Shocked to see production is showing us this end of it, but in the words of Lisa, “I love that.”

The women are left trying to pick up the pieces, and the producer jumps in to see if they all still really want to go on the trip. After much ado, they all decide to go, but just 12 minutes after Jen has left the scene, Homeland Security swarms the bus, and the cops are on the hunt for Jen Shah. The ladies are blatantly confused.

As they watch from the bus, Whitney wants to know if this is a prank, and they cannot wrap their minds around what is happening. Heather gets off the bus to talk to the “po po” (which she actually calls them to their faces). IMO, she spills too much about Jen, her story, and where she went. Anyone else notice how the feds just kept repeating, “Is she okay?” about Jen?

Whitney realizes in retrospect that something’s weird, especially because Jen asked her to turn off the mic. Hoping that this group is smart enough to understand they should not call Jen to let her know that Homeland Security is looking for her — and maybe they should also refrain from contacting Stu, her assistant. But then again, they think Jen’s just playing a joke on them and they have no idea just how serious this truly is… To be continued…