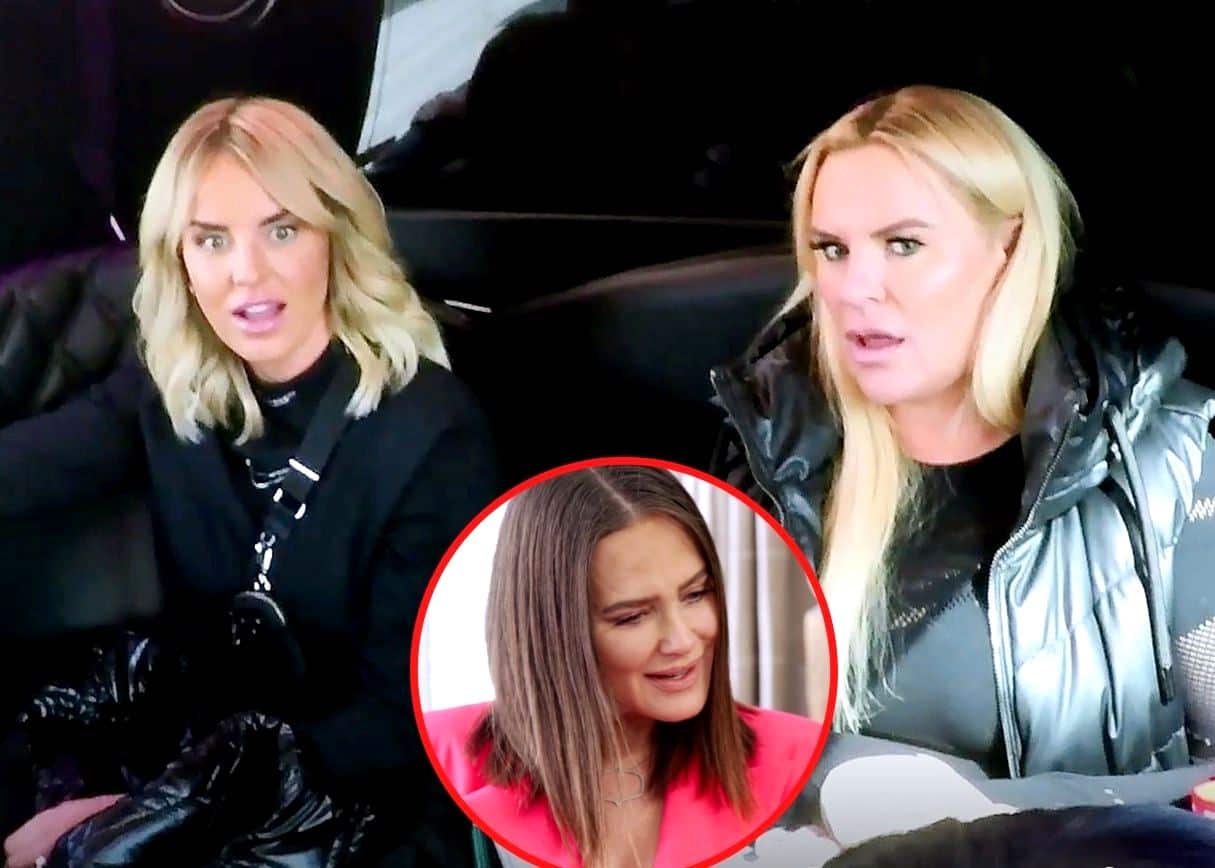 It’s 9:33 a.m. in the Beauty Lab Parking Lot. Jen left under the guise that her husband, Sharrieff, has internal bleeding. And then the Feds show up. On this episode of The Real Housewives Of Salt Lake City, Jen evades arrest and leaves the women reeling, trying to piece together why Homeland Security could possibly be searching for their friend.

Inside the bus and beyond confused from the surreal experience, Jennie, Whitney, Heather, and Lisa hop on their phones in an attempt to gather information and to cross-check the stories. Heather texts and calls Jen (against Lisa’s better judgment), and Lisa decides to call her attorneys since nothing is making sense. They all begin to worry about being guilty by association, but Jennie is as cool as a cucumber and has no problem helping herself to Jen’s left-behind bag of goodies. Savage. They decide to go forward with the trip despite the wild interaction they just witnessed, and they begin the trek to Vail.

Meredith arrives at her Vail rental, and the “premiere” home is insane. There’s even an “experience curator” that comes with the house. Sounds like money to me. While Meredith is toasting to fun in Vail, Lisa is scratching her head as to why Jen was so slow to leave. They are trying to find out how Homeland Security would know where to look for Jen, and they come to the very scary conclusion that someone may have ratted out Jen’s location. Jennie matter of factly thinks there may be a warrant out to look for Jen.

While on the phone with her husband, Lisa whispers in front of the other ladies, “I think Meredith might know something. I’m dead serious.” Hmmm. Whitney questions Jen’s lifestyle and how she can afford $80,000 parties for Meredith and wonders how she actually gets her money. Apparently, Jen is the Chandler Bing of the group since no one can pin down Jen’s true occupation.

When the bus takes a quick pit stop, Whitney grabs Heather alone and ponders aloud if Lisa knows something. Lisa DOES keep saying “someone tipped them off,” and why DID she call all SIX of her lawyers immediately? Also, who has six lawyers? Move over, Harriet the Spy… Whitney is on the case.

Lisa wondering if Jen is gonna show up to Vail makes me want to laugh out loud. Jennie questions who Jen is closest to, and Jen’s assistant, Stuart, keeps coming up. Whitney, busy on her phone, lets out an audible gasp as she finds the news article breaking Jen’s arrest.

Jen AND Stu are accused of ripping off vulnerable victims in a telemarketing scam for many years. This translates to fraud and money laundering. Lisa begins fake crying about Stu, since he, too, is involved in this mess. Heather can hardly get through reading the article without having a breakdown. What a weird smile from Whitney when she tells the ladies that Jen has been arrested and is in custody. Perhaps it was an adverse reaction to Lisa’s crocodile tears? Whitney thought Jen simply had a sugar daddy to lead the life she was living, but alas, Jen was conning people out of money and could receive up to 30 years in prison.

Jen’s business was known for being high pressure, but Heather did not know she was taking advantage of the elderly or people with disabilities. Jen allegedly hit up vulnerable people and set them up with fake subscriptions.

Over at Jen’s house, a search warrant has been executed, and they have begun raiding it just as Jennie surmised on the bus with the ladies. Let me tell ya, the Ring camera footage of the raid sent chills down my spine. And watching Jen’s son led out with his hands up… it’s just so sad.

Lisa decides to call Meredith and fill her in on the news. Lisa explains that Jen is not on the bus because a full SWAT team came to arrest Jen for fraud. Meredith is stone cold and states point-blank that she is not surprised by this. Meredith suspected for a while that too many things didn’t add up with Jen, and Meredith believes that she actually kinda knew who Jen was, but no one wanted to listen to her. Meredith’s reaction is a bit… weird.  Tell me who tipped off the Feds without telling me who tipped off the Feds, amiright?

Watching the bus crew try and figure out Jen’s charges is hilarious, especially when Heather refers to Ozark to explain how money laundering works. When startups get mentioned as a great way to launder and evade taxes, Whitney jumps all over it. “It makes sense. That’s why she always starts companies!” Lisa calls Whitney Nancy Drew and is getting a bit annoyed with her trying to solve the mystery. But it is curious that Lisa is trying VERY hard to point fingers in every direction, isn’t it? Man, everyone is a suspect now.

Mary is the first to arrive at Meredith’s Vail rental, and she finds Meredith in a bubble bath. I can’t even deal with Meredith breaking down Jen’s arrest to Mary while she was in the tub. It is a whole vibe. Meredith tells Mary all that she knows, and Mary, for once, is left speechless. Mary states that she never really suspected Jen, but once again, Meredith states that she was not surprised by this news. Meredith tells Mary that Jen is accused of fraud and money laundering and mentions that this must’ve been an ongoing investigation UNLESS an insider gave them the information. HINT HINT. Meredith further tells Mary, “I have been traumatized and terrorized” by Jen Shah for almost two years, and she knows, for almost certain, that Jen is not innocent.

As the bus approaches Vail, Jennie states that Mary is not her mom, but she will go into the trip open-minded even after their last altercation at snow tubing. Jennie realizes that her issues with Mary are very small compared to what is happening with Jen. When they finally make it to the home, Heather barrels in screaming, “it’s the Feds,” but alas, it’s too soon for that. Meredith is still in the longest bath in the history of history. Meredith, that water has to be cold by now… AND, isn’t it interesting that she isn’t even one iota interested in finding out the breaking news for Jen?

Seems like all the minutia and fighting the women were having amongst the group has become overshadowed by Jen’s legal woes. On a lighter note, why is Robert Sr. saved in Mary’s phone as “Dad?”#dead.

Over some bites, Meredith leans in and asks, “So what does everybody think?” Most of the ladies say they were shocked and they state how surreal the moment was when they got surrounded at Beauty Lab. According to Whitney’s sources, Jen was arrested on the side of the road and was found from a ping off her phone, insinuating that she was on the run. Mary states that she feels somewhat betrayed by Jen and doesn’t like that she showed no remorse for scamming old people.

Then Meredith brings up an incident that happened back in late September. Jen and her crew came to Meredith’s store, and evidently, one of Jen’s employees took a green clutch from Meredith’s store. Even more upsetting to Meredith was that Jen still kept the employee on her team despite that red flag. Meredith further shares more odd things about Jen, like how she is red-flagged in the system of Louis Vuitton because she pays in cash. Meredith tells the ladies when all the puzzle pieces get put together, nothing is consistent about Jen.

Heather shares that one night, she put Jen into an Uber, only to find out that mid-ride, Jen got out at an intersection for some odd reason. Lisa jumps in and wonders aloud if Jen was alone, and she lets on that she knows something juicy about Jen. She looks like a deer in headlights, leaving us to wonder, what does Lisa know?!