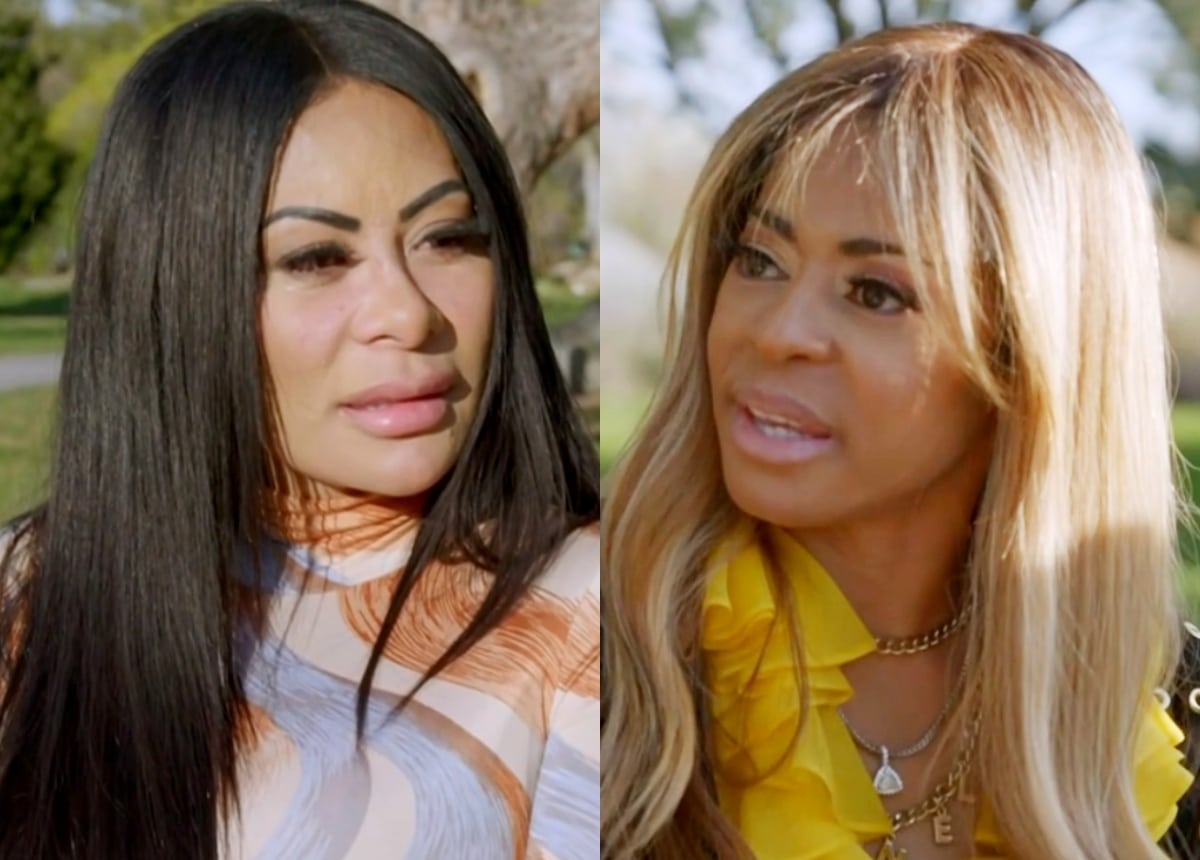 On this episode of The Real Housewives Of Salt Lake City, hopes of a peaceful luncheon go south as loyalty gets questioned and friendships remain on rocky ground. Who is able to be supportive and who is really lying about believing the accused?

Meredith is busy entertaining her son’s artistic abilities and designs when Jennie enters to kick off the “nice, easy girls’ night.” Jennie fills Meredith in on the latest regarding her husband, Duy, pushing a fourth child. The topic of a sister wife resurfaces, and Jennie is just as turned off by it now as she was then.

When Lisa enters, she is happy to see food and states enthusiastically they are not going to be “anorexic.” The ladies decide that they deserve to have some fun and push the idea of a sister wife right to the rug. After many cocktails, they talk Jennie into roleplaying to spice it up in the bedroom. Jennie dons a blonde wig and some lingerie, and this is just what she needs to nix Duy’s idea of a sister wife.

Two days later, Jen phones Heather and states how she has finally talked with Lisa and they have decided to have a lunch date. Jen is curious about why Lisa went MIA on her during her toughest time, but she has high hopes that a conversation with Lisa can answer her questions.

Things are tense right off the bat, and Jen states how hard it has been on her and her family, especially because she is innocent. Lisa uses that as an opportunity to blow smoke up Jen’s butt and tell her that she sees her as innocent, too. However, Lisa explains that her feelings are hurt by Jen, which would explain why she did not reach out right away when Jen called post arrest.

Lisa questions where she is with Jen and fake cries about how she felt “broken” by Jen.  She states that she was emotionally wrecked. Jen cries that this is the lowest point of her life, and she can’t believe Lisa went silent when sh*t hit the fan. Lisa reminds Jen that she has feelings too, and her current situation does not give Jen the right to say whatever she wants whenever she wants.

Jen throws in Lisa’s face that Heather stepped up as a bestie when she needed someone the most, and when Jen breaks down, Lisa reminds Jen that no one knows how to manage situations like she is in. Jen believes that Lisa is more of a fairweather friend and begs Lisa to support her.

Heather’s older brother is visiting from Switzerland, and he explains that he has chosen to leave the Mormon church, because of Heather’s influence. Heather states that she was afraid to tell her brother when she first left, but now things have taken a turn. Her brother began investigating Mormonism and now feels duped by the religion. He is traumatized and relieved all at the same time. He is happy to have saved his kids from a cult and feels like a bad parent for putting them through all of it. Heather’s brother really needed Heather, but it was a confusing time for her. She explains that she just wants everyone to honor their father, and her brother reminds her that she saved their family.

During Ramadan, there are many prayers said, and there are many prayers to protect Jen. She calls it a blessing that she is going through this tough time during Ramadan. Sharrieff pulls Jen aside so they can talk about things. He lets Jen know that they must start making some moves, and he recommends conserving their money in order to fight for Jen’s freedom — ie: downsizing.

“There’s no reason why Whitney and I should be having problems.” LOL, Lisa. She attempts to smooth things over with Whitney, yet again, by taking her to a zen place… for some paddleboard yoga. Whitney is more concerned about drowning in the water since she has been threatened in seasons’ past (thank you, Jen).

As Whitney and Lisa dry off after the lesson, Whitney states why she was annoyed by what occurred in Vail. Lisa explains that she did question Mary about being God and about the Cameron stuff. Lisa states that she believes Cameron, yet she also kissed Mary’s a*s big time. Whitney comes out and tells Lisa that she talked to Cameron to find out his side of the story and go to the source. Lisa calls Mary “complicated,” but Whitney tells Lisa that the rumors now say that Mary and Robert are “predators.” Evidently, Mary and Robert use fear to get what they want, and Lisa realizes now that Mary said Jen is where she is because she messed with her church. Wait — does Mary have Voodoo dolls??  It’s all sounding very dark and creepy, and Whitney comes to terms with the fact that all of these rumors about Whitney being a cult leader are probably true.

It’s the day of Jennie’s pho luncheon at the International Peace Garden, which is ironic considering how much drama is currently circulating throughout this “friend” group. Jennie explains that in the Vietnamese culture, they sit down in a non-threatening environment to talk things out and find peace. Jennie is so naïve — it is adorable.

Whitney and Heather are team Jen. Interesting how Whitney is busy investigating Mary, but she welcomes Jen with open arms and states that Jen is innocent until proven guilty. Jen muses if her attendance at Jennie’s luncheon will be accepted by all, but she decides she is going nonetheless.

While Meredith, Lisa, and Jennie chit-chat in the garden, WHeather rolls in, arms linked with Jen. Meredith is not here for this. She made it clear in the past that if Jen were going to an event, Meredith would not be attending. Therefore, Meredith is p*ssed and caught off guard upon seeing Jen stroll up. Meredith has decided to disengage from this situation and just sit quietly.

Jennie is excited to celebrate her culture, but she is more excited for the women to have peace in their lives… easier said than done. The tension is thick, and Mary is not even there yet! Jennie leads the way to the table, and Heather realizes that she is stuck sitting right next to Mary… which should be interesting considering the way things were left in Vail.

Mary finally arrives after trekking through the park in formal wear, and she’s donning a new blonde hairdo. The women compliment it and Lisa shows the picture of Jennie in the blonde wig from the other night. They all love Jennie’s look, but Mary takes it too far. “I like the slanted eyes. Love it!” How inappropriate. Remember when Jennie wanted this to be a peaceful lunch?!

Mary and Heather hold a side conversation, and they both decide to move on from all the “crap.” They toast to liking each other, and it seems like for now, the Peace Garden is actually working its charm. However, Whitney isn’t buying it. Mary overhears Whitney whispering to Jen that everyone is faking it, and so Mary calls Whitney right out.

Whitney states that it is “fascinating” that everyone is sitting around pretending that nothing happened. Jen jumps in and reminds the ladies that she has never been in trouble in her entire life. Mary compliments Jen’s outfit in the arrest photos, which causes everyone to chuckle. Jen continues to explain that she was “completely oblivious” about everything they were accusing her of, but Mary is finding it hard to believe she had NO idea of what was going on. Mary questions if they just “randomly chose her name and Stuart” to arrest, and Jen continues to deny, deny, deny.

All the women yell over each other and essentially fight over who talked the most about Jen and her arrest.  Mary interjects with, “Excuse me, I did not talk about you.” Excuse me, Mary? Did you forget you are on a TV show and you were filmed talking mad sh*t about Jen? Jen is upset because she is fighting for bigger things than what is happening at the table. Jen is scared because she cannot figure out how she got wrapped up in this mess legally, and when Lisa continues to interrupt Jen and Mary’s conversation, Mary snaps. Mary claims, “Lisa is not self-aware of her behavior,” and she ponders if it’s because she “eats candy and not food and maybe her periods are bad.” It is hilarious that MARY is accusing someone of not being self-aware…

Mary continues to lie to Jen’s face by stating, “I care. I don’t judge.” Oh, Mary. Jennie can’t handle Mary trying to be the innocent one. She tells Mary to stop lying. Jennie was right next to Mary when she was saying Jen deserved all of this. Jennie loses it and shows Mary the gate to leave the party. Mary refuses to be called a liar, and it is wild how everyone is making Jen’s arrest about THEM.

Jen excuses herself from the table. Mary grabs her up, and she tells Jen that she “always keeps it real” with her. Mary continues to tell Jen she is not a liar and tells Jen, “I pray to God you’re guilty.” OMG, talk about a Freudian slip, Mary.

Meredith cannot handle the way things are unfolding, and she leaves the table too. When Lisa runs after her, Meredith snaps, “You have been screaming for a half-hour, I can’t anymore.” Lisa desperately tries to explain how she is so sick of people coming at her and she is aggravated that Meredith is not standing up for her.

Meredith explains that the energy right now is negative and toxic, and Lisa tells Meredith that she makes her feel safe. Lisa begs Meredith to stay for her and all the pleading works. After much ado, Meredith returns to support Lisa… and Jen and Mary come back as well. Now that the table is packed again, Heather states that they can all understand how terrible of a situation Jen is currently in. Jen continues to promise she is innocent, and she states that she needs people who are truly there for her right now, but the hard part is trying to figure out who really has her back…