Home Real Housewives of Orange County News RHOC Recap: Heather Threatens Shannon as She Gets Called Out for Her Actions, Plus Noella Struggles to Navigate Divorce

RHOC Recap: Heather Threatens Shannon as She Gets Called Out for Her Actions, Plus Noella Struggles to Navigate Divorce 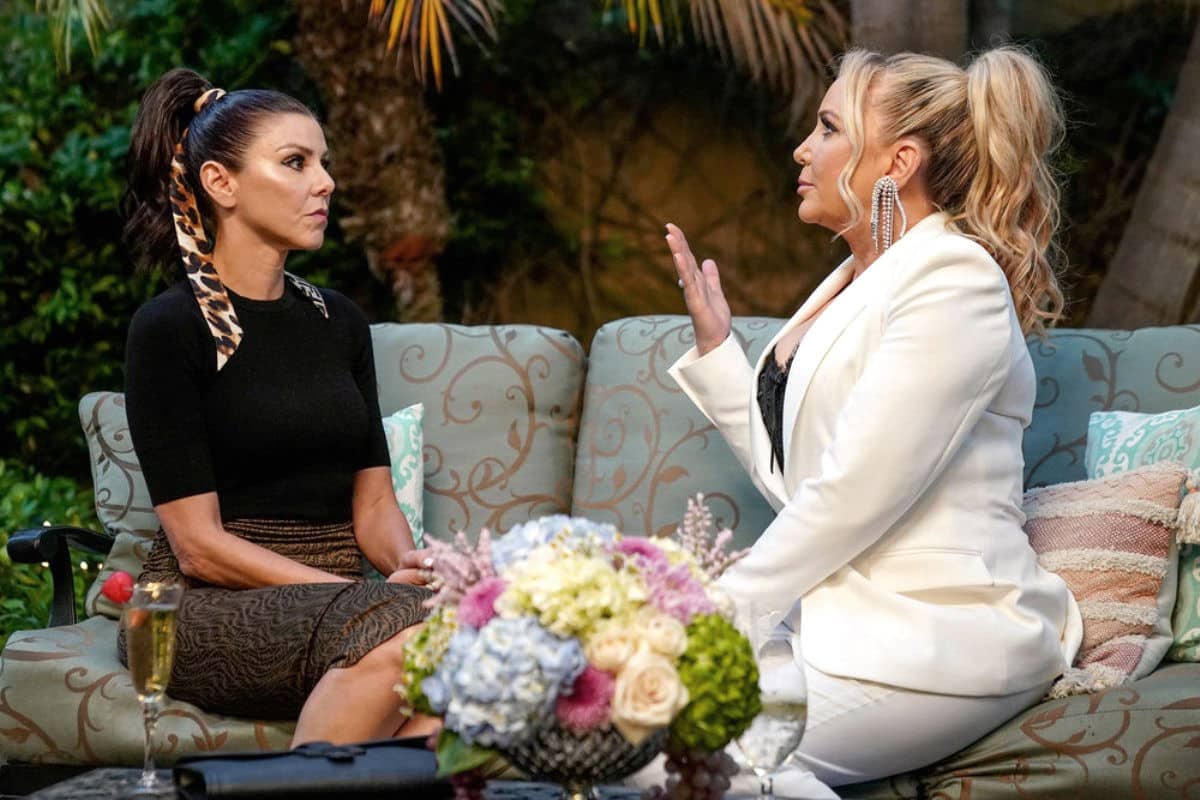 Grudge holding gets taken to the next level on this episode of the Real Housewives of Orange County. How could it be possible for some friendships to move forward after issues while others get put on ice?

Jen invites Heather to her home… which could likely fit inside of Heather’s house 32 times. Jen seems to think she has a lot in common with Heather, but I am not seeing it. I mean, Terry wears shirts, unlike Jen’s husband, Ryne. Heather and Jen get to discussing the beauty industry and how nobody is perfect.

Jen shares how Noella spoke condescendingly to her at Heather’s party, and she tells Heather that she does not like mean girls. Speaking of mean girls, Heather makes it clear that although things have been worked out between her and Gina since her party, Shannon has yet to take accountability for her actions, and so there is still a rift.

Noella is an absolute mess. She forgot her bra at home and is more upset about the credit cards being turned off than about her missing husband, James, who has filed for divorce. Nicole is out drinking lunching with a distraught Noella. Noella explains that she doesn’t know where James is and proceeds to phone him right there on the spot like a boss. When he does not answer, this causes her to unravel. She doesn’t know what to do, and Nicole remains stone-cold in her advice to Noella. Nicole is not cutting it as a friend for Noella, and as Noella breaks down, Nicole tells her to “walk out quietly cuz there’s a lot of people here.” Perhaps Nicole should be more embarrassed about her makeup than of how loudly Noella is crying because HER HUSBAND LEFT HER. And while you’re at it, will ya give the girl a damn hug, Nicole?!

Shannon’s company Real for Real is finally *taking off,* and her daughter, Stella, has stepped in as her assistant. Shannon explains that she gets a monthly check from David that does not cover her expenses, and so Shannon feels a lot of pressure for making sure she is bringing income into her home. She claims she is “paying for everything,” so let’s hope this company makes her a good chunk.

It’s time for a double date, ya’ll! Travis and Gina meet up with Shane and Emily. They discuss how Emily spoke with Nicole, and we viewers only get a crummy flashback of this previously filmed conversation. In case you forgot, Nicole called Emily fat and was rude AF, but Emily has forgiven her because that’s reality TV, folks.

Gina lets Emily know about Noella’s divorce, and Emily is completely flabbergasted. No one could understand why “Sweet James” would cut Noella off, especially because she must care for their child. Emily ponders if James filed in Puerto Rico so he could control Noella’s access to money, but one thing is for sure, he is a trash bag.

Speaking of not understanding people, Gina makes it clear that she has a new type of friendship with Shannon. Even after trying to smooth things out with Shannon, Gina is still annoyed that Shannon called her and Emily manipulative. Shane suggests that this Shannon drama not be brought up at Shane’s celebratory party for (finally) passing the bar, but when else are all the ladies going to be in the same room?!

Shannon has brought her “assistant,” Stella, to see Dr. Moon because Stella has hurt herself in volleyball. After he stabs her with a few needles, he can see Stella’s emotions, and right now he is seeing anger. Stella claims the anger stems from stress and worry about her mother’s happiness.

In another mother-daughter scene, Noella talks with her mom about being served divorce papers. Her mother loves James, and the women agree that their James is not who this person is today. Noella has hopes that James will come home and wishes that she could just have a conversation with him. Noella’s mom believes that he is gone for good, but Noella prays that James may change his mind about leaving. Perhaps her mother should have told her to open a savings account during that year she refused to meet James… Call it mother’s intuition, but it’s clear James is a bad guy.

Emily is prepping for Shane’s big bar party. Since Shane has at last passed, Emily has more things to worry about like where the belly dancers are gonna go or if she can fit into her dress for the event. But the party is not going to go off without a hitch. There are far too many question marks in “friendships” for that… and too many ladies who insist on finding the underlying cause of drama. Take, for instance, Shannon. Shannon is having a tough time figuring out why everyone else could make good with Heather, yet Heather is continuing to harbor hard feelings toward her. Even Noella, who is going through literal hell with this divorce, agrees that Heather’s text to Shannon was a bit over-the-top fresh.

Man, Heather is really pushing this “I am friends with Nicole” storyline, huh? She travels to Emily’s party with Nicole and her boyfriend to prove that they have no problems. #optics. Nicole fills Heather in on Noella’s divorce, and she also wastes no time throwing Noella under the bus. She tells Heather that Noella called her a “fake b*tch” because Nicole needs a storyline and wants someone else to be in the hot seat. Duh.

Heather is stunned to hear that Noella was talking badly about her to Nicole, and to that, Nicole responds that Noella had a lot of drinks and likely didn’t remember saying it. Sooo, why did she bring it up other than to stir up drama?

For a Tuesday night party, things are pretty lit for Shane. Shane is less than thrilled to have this party, but luckily, his mother is hyped for him. It’s an awkward entrance for many of this “friend” group, and it is extremely interesting that Heather brought Noella a present because she was sweet to her daughter, Max, about being bisexual… especially now after learning Noella called Heather fake!

Heather is avoiding Shannon, but Shannon is on Emily’s radar. Emily lets Shannon know that she was bothered hearing she called Gina and Emily manipulative to Heather. In true Shannon fashion, she tries to wiggle her way out of it, but Emily is not having it. “So you’re saying Heather’s a liar?”

Because the day is about her husband, and why should female drama be a part of it, Emily decides to drag Heather over into the conversation to set the record straight. Since Shannon can’t remember if she said those terrible things about Emily and Gina, Heather is now going to repeat what she can recall. Messy! Heather reminds Shannon that she did, in fact, call Emily and Gina manipulative. They are about 11 seconds away from ruining another party.

Heather finds Emily and asks to find a nice quiet spot for her to talk with Shannon since Shannon is chasing her around the party, begging for forgiveness like a puppy. Shannon cries and pleads for a reconciliation to a statuesque Heather, and Heather finally says that nothing will change her mind. Heather threatens, in a very Erika Jayne type of way, that if Shannon were to “ever come after me or my family ever again, you are going to lose a lot more than just my friendship. This will cost a lot. And I’m not saying it as a threat, I’m saying it as a promise.” Shannon has to be SHOOK.