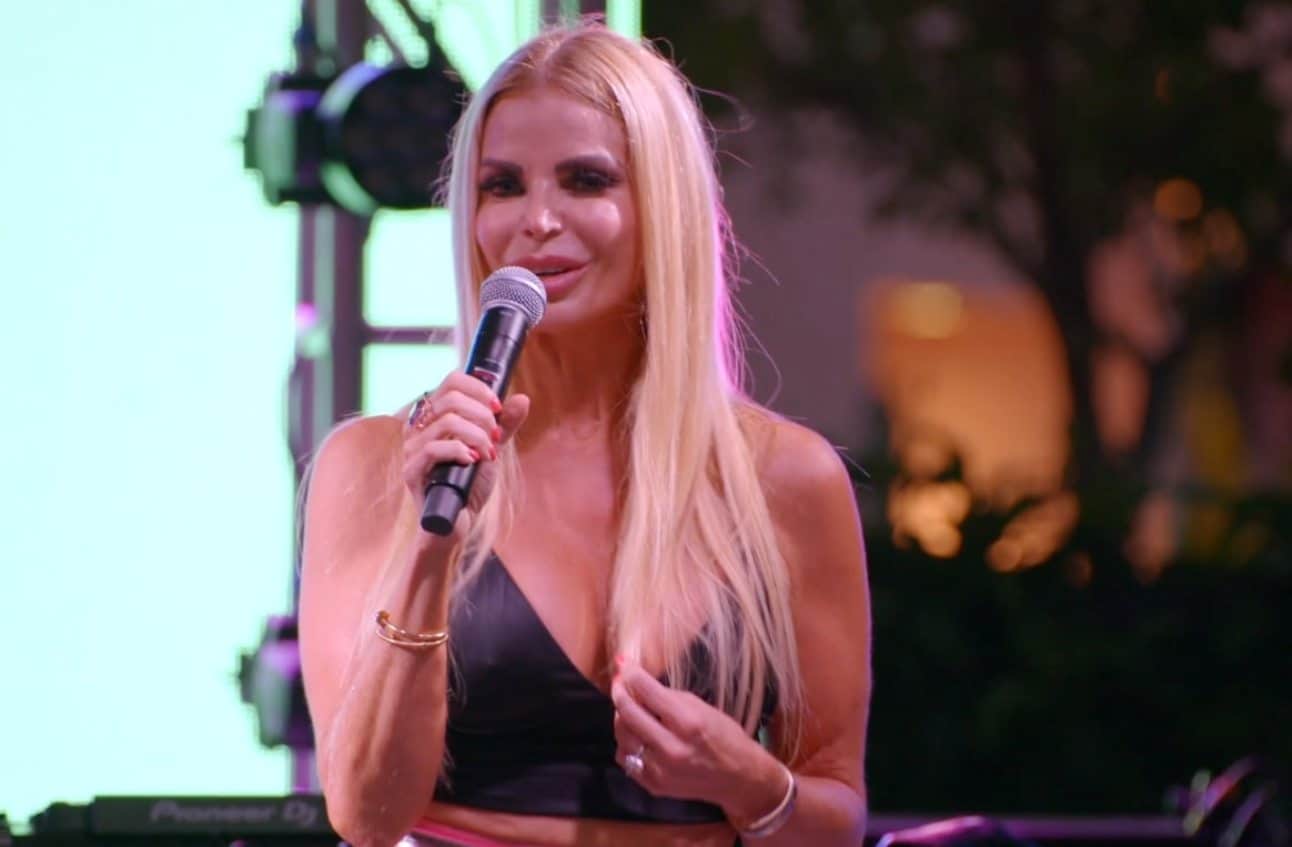 We will be experiencing Pride Miami-style this episode, and we are first in line for Martina’s art show. Let us head down south to Miami and see how our Real Housewives of Miami experience these two important events, shall we?

We are back at Nicole’s sushi party for some long-awaited explanation as to what caused such a huge rift between Todd and Peter. Todd told Peter he was going to be a loser just like his father. Well, that was honestly pretty much on point due to how he ended up! Herman also left his stepson a sizeable pot of money that will enable him to not do anything productive with his life except spending money on fast cars and women. I think Todd may have been onto something since that is how Peter’s dad lived his life as well, plus being a Cocaine Cowboy.

Alexia will not marry Todd if he and Peter do not make amends. She will not break up her family over this, and she wants the two of them to make nice with each other. I am sorry, I am so distracted by the food, especially the butter crab roll! Sorry, I digress… Lisa then brings me back to reality and needs clarification if the “rolls are the balls on the crab?” Someone needs to just pat her on the head and tell her to go play with her dolls.

Larsa wants to know about the pearls being put in the shaft of the penis. Alexia lets us all know in her ITM that it is a Cuban thing that is enjoyed by all. Lisa, in her ITM, claims to have never used sex toys, but she has used other things that are not considered as such. What is she referring to, and more importantly, how did she score Lenny? Larsa then inquires if Julia is attracted to only women, and she considers herself bisexual. I agree with the producer’s question when he asks Alexia if she realizes that she and Lisa are twinning. Alexia looks like she does not see that as a compliment, but they are morphing into each other with those lips!

Alexia then shares that her dad was gay and lived a closeted life. She has now become an advocate for the LGBTQ+ because of the way her dad had to hide this life in fear of being judged. Alexia thinks she married a man who was like her dad since Herman never came out of the closet. Side note: I love how Alexia uses her fan to emphasize the dramatic announcement. It gives me Mama Elsa vibes. Marysol thinks that Alexia keeps dropping family secrets like they are truth bombs. Alexia is honestly providing all the storylines this season.

Adriana then has total word vomit and blurts out that she heard at Herman’s funeral that he died during sex. She is most definitely looking for camera time since who makes that kind of announcement about the dead? Alexia would like to die that way too, but she found Adriana’s comment inappropriate. She believes that she and Herman were soulmates and that is why they got married and stayed together so long.

Larsa is meeting with Sean, who is a realtor who has sold homes to the tune of 250 million dollars. She is asking him to sell her house that she shared with Scottie. Larsa will be splitting the proceeds with Scottie since they did not have a prenuptial agreement. These ballers never learn, do they? Scottie wants to increase the sale price to 14 million dollars. Side note: Did Larsa really tell Sean that she used to ice Scottie’s balls and his knee in that room?

Sean thinks that the house is really dated, and he wants her to update her furniture. Larsa thinks that she needs to make this next chapter about herself instead of living Scottie’s dream in this house. It is time for her to move on and get some independence until she finds another rich man to support her on OnlyFans.

Alexia is meeting Guerdy at Sugarcane, which is a raw bar in Midtown Miami. Guerdy mentions a few event locations and is considering Vizcaya. This venue is a historic landmark built in 1916, and it has 10 acres of formal gardens. Guerdy lets us know in her ITM that she would not be doing this event if it was not for Alexia. She must keep asking her questions about her wedding ideas. Guerdy is finding Alexia to be a little scattered and cannot even answer who will officiate and walk her down the aisle. First, who gets walked down the aisle on their third wedding? Alexia is finding Guerdy to be overbearing, but she recognizes that is how she gets her job done. She is tolerating her pushiness for now.

Nicole is having a playdate with Lisa’s kids. Her son, Greyson, is just precious, and with Lisa’s kids, there is a lot of cuteness to behold. Lisa likes Nicole and she really vibes with her and thinks she found the playdate lottery. They step away and let the nannies take over, of course, just like any other day. Lisa chats with Nicole about her challenging times with Lenny. She admits that they almost divorced and the grass is not always greener on the other side.

We are now at Wynwood Pride, which is being held at a music venue called Oasis. Alexia is winning an award for her contributions to the LGBTQ+ community. In her ITM, Marysol, while sucking her lollipop, is wondering if Herman’s lover is in attendance. She is priceless in that ITM!

Julia is so happy she can be herself here and live her best life. She could not be her true self in the USSR. Larsa, in her ITM, cannot even get the acronym down right. Marysol is watching Adriana grinding on Julia and thinks it resembles a sexual pantomime. She is really cracking me up in her ITMs. Julia insists it is only a flirtation and she and Martina do not have an open relationship. Side note: I am so distracted by Kiki’s lips with her rainbow-colored sparkle pout, but I am digging it for this event.

We now head to Ft. Lauderdale to the farm where Julia and Martina are enjoying Bloody Marys. Martina is worried about how her work will be received. She is confident in her tennis abilities, but this is a new world for her.

Alexia is having Marysol and Kiki come over to chat. I love watching her relationship with Frankie. He is such a sweet kid, and they have a very loving relationship. Marysol is seeing more depth to Kiki than just a fascination for goat tits. Alexia shares how she is interested in meeting Herman’s lover. He wants to meet her on Monday. Marysol cannot fathom meeting her ex-husband’s lover. The producer asks her if she ever dated someone who she found out later was gay, and she reluctantly claims she has. Marysol, in Miami you must invest in a better gaydar!

Martina wants Julia to tuck her boobs in while getting dressed for her art show. She does not want her wife letting it all hangout. Julia obviously likes getting the attention of Adriana and shadily tells Martina she is the plain one. Ouch, that was not nice and uncool. Martina might need a cocktail since she is incredibly nervous about how she will be received. Julia is not helping by telling her that she is plain Jane.

Adriana brings her new friend Jacob, who is trying to make himself look like Lenny Kravitz. Never going to happen, darling. Adriana has a four-month rule with her guys, and he is only two months in. Julia sees Jacob and cannot believe her friend Adriana did not share she is dating a guy. What is up with Adriana’s skirt? Was it previously a tablecloth at a quinceañera? Adriana accidentally invited two potential dates to this event. Thierry is in only one month, and I love the captions where he still must wait three months for sex. Nicole finds this interesting since she thought Adriana is more into chicks than d*cks. Me too. Larsa asks how long she and Thierry have been dating, and Adriana rudely shuts her down.

Adriana thinks that Martina is a perfect representation for her gallery and a perfect artist for pride week. Martina thanks everyone for coming to her art event. She lets everyone know she does not just hit tennis balls for fun.

Alexia is now meeting up with Leo at Spanglish to find out about their relationship. Leo is late, and Alexia calls Jonny for a pep talk. The scene leaves us watching the door, and then we now have a to-be-continued.

Next week, we hear about the conversation with Leo and Alexia. I hope you Blurbers all have a wonderful holiday and an incredibly Happy New Year!