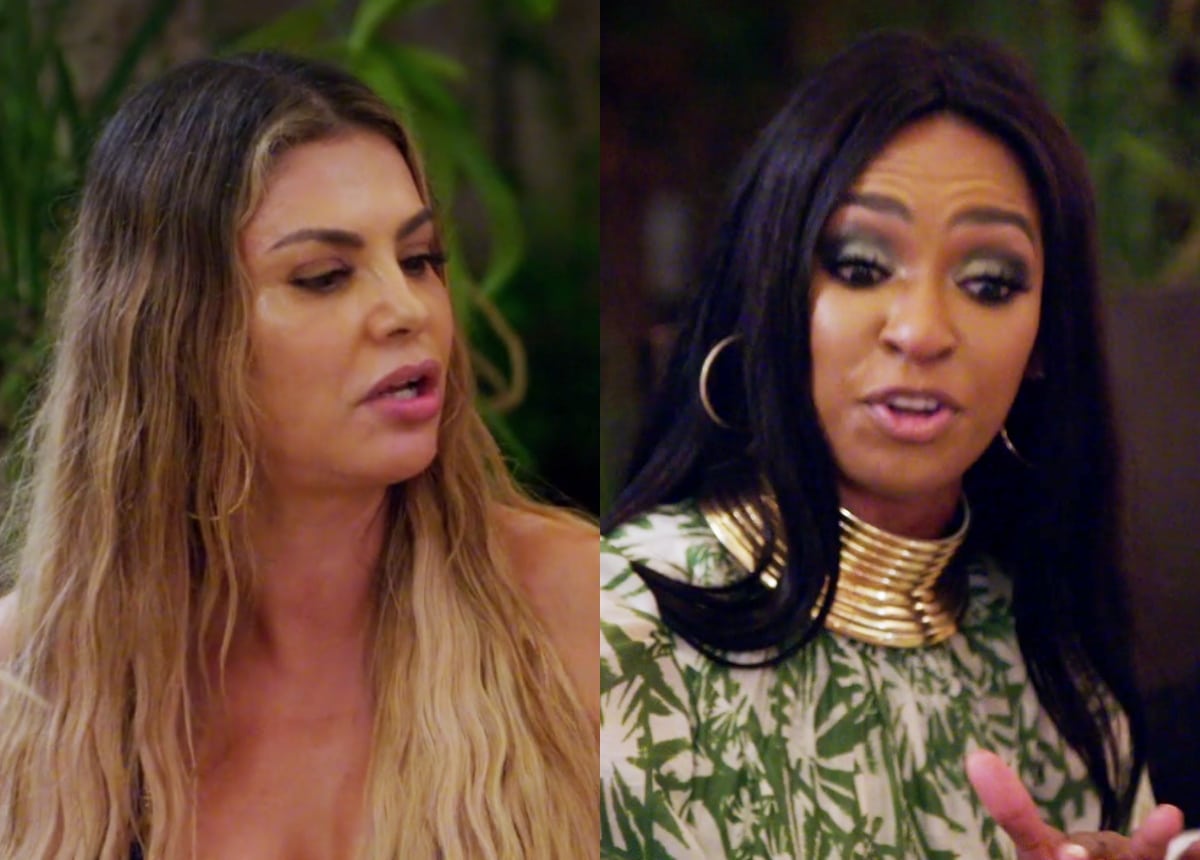 This week on the Real Housewives of Miami, will Alexia get to meet Herman’s lover? This episode is aptly titled, “It is my party and I will cry if I want to.” There will be tears over a horrific event and a tug of war over who will capture the HBIC title. Let us celebrate Julia’s birthday Tulum-style, shall we?

Alexia is still waiting to meet up with Herman’s lover, and he is a no-show. She wants to be able to close this chapter of her life with some resolution. Alexia is in a great place with Todd and needs an explanation of the timeline behind Herman’s relationship. Side note: Doesn’t Alexia remind you all a little of Teresa Giudice, who is also vapid and superior?

Larsa is taking her daughter Sophia shopping, and she gets to privately shop with a personal shopper. She is a gorgeous young girl and wants to get into modeling. Larsa spent $7,500 on clothes for Sophia, and call me green with envy. Larsa then describes how her relationship with Scottie fell apart. They were like two ships passing in the night and only meeting up for their kids’ benefit. She never got to be carefree since she proclaims she has been a MILF since she was 24. Is she letting us all know she is going to try and relive her youth and morph into Kim Kardashian?

Julia is having Adriana and Guerdy over to help her plan her birthday party on the farm. Guerdy is really the only one helping with the party planning, but Adriana is there basically to diss anything Guerdy does. Julia wants a beach house farm party with a Tulum theme. Adriana is not dressed for a farm since she is wearing a white dress and white Valentino heels. She looks foolish clomping around dressed in white in goat and chicken poop. Julia ends up giving Adriana a foot massage after her feet got covered in goat poop and her shoes stuck in the muck. She really did not need to cater to her since she knew she was going to a farm. Guerdy is suspicious of these two’s closeness and thinks they are friends with benefits.

Guerdy asks Julia if her girls like the farm, and she shares they do not care for it. She then asks if it would be different if she had a boy. Based upon the look on Julia’s face, I could almost hear tires screeching based upon her reaction to that question. Julia breaks down into tears, and the story she shares is utterly heartbreaking. She lost her eight-day-old baby boy named Maximillian due to shaken baby syndrome. The nanny that she had hired caused the death of her baby. How horrific is this story, and the nanny vanished without taking accountability after this? Guerdy breaks down into tears and must walk away. Through my own tears, I see Guerdy? walk away crying?!? Adriana thinks that Guerdy had to make it about herself instead of focusing on Julia. Now, this makes me mad since I do not want to have to agree with Adriana, but on this topic, she is on point.

Marysol has Alexia stop over, and Jonny is there as well. Alexia shares how he did not show up, but they did talk afterward for four hours. Herman’s lover did not want to be on camera and have this discussion. Herman bought him a home and brought his lover’s parents over from Cuba. He told him how special Alexia was and he did love and respect her. Alexia is relieved that Herman was happy when he left this world. She jokes, should she invite his lover to her wedding? Too soon, my darling bobblehead Alexia. Side note: Alexia annoys me when she talks — she comes across as haughty with her nose in the air.

Larsa and Lisa are looking at homes in Boca Raton. Lisa does not think she should look in Boca since it is for the old folks. Larsa thinks this 10-million dollar house in Mizner Park would be living the simple life. The master bedroom door opens by itself, so I guess it would make your life easier. Lisa asked Larsa, “Why you do not just stay in your current house?” Larsa says it is too much house for her, but she is looking at a huge house in Boca. Scotty and Larsa have been separated for three years now, and they both seem to be dragging their feet finalizing things. Lisa was hopeful that they might reconcile since they have not settled things, but Larsa assures her it is over. Side note: Wow, these two and their lips are so distracting, especially Lisa. Why do women want to resemble a blow-up doll?

Julia is having her 49th birthday party, and Guerdy is giving her the expert treatment. She is creating a cool relaxed vibe Tulum-themed party, and it looks like it will be a fun theme.

Nicole has her mom over to take care of Grayson so she can attend the party. She describes how her mom was able to make ends meet when her dad got sent away. Nicole’s mom had to sell all her jewelry and fur coats to be able to provide for her kids. She was fortunate to have expensive things to sell since a lot of people have a lot less when they are left in that situation. After watching what her mom went through, Nicole was determined to never end up like her mom and not be independent.

The ladies are all getting ready for the party, and Adriana is the only one getting glammed up. I will never tire of watching Lisa and her insane closet moving contraption. Adriana arrives with her colorful dog and is underwhelmed by the Tulum décor. Guerdy thinks that Adriana is jealous and is just being shady. Adriana starts moving stuff around according to her liking. She does not like the lack of chair covers and the bar does not look sophisticated enough for her. Adriana must change into her party outfit so maybe she can match her dog?

Julia describes her farm theme as Jurassic Park. The ladies are coming into goats bleating and roosters crowing. Larsa does not like animals and does not like to hear birds? Julia has cursing cockatoos, and how freaking awesome is that? Nicole and Julia are the only ones who are dressed in the Tulum vibe. Julia then very flirtatiously inserts some jasmine in Adriana’s cleavage. Guerdy then blurts out how Adriana was getting a foot massage from Julia earlier. Martina wants to know what Adriana did to deserve a foot massage. She wants to know why she got the Pope treatment. Martina is upset that she gave her one and does not do it for her. She says their relationship is one-sided.

Larsa asks Martina for tennis lessons. Does she really think Martina has the desire to become a tennis instructor after her illustrious career?

Guerdy is curious if Adriana and Julia have crossed a line. Adriana keeps telling Guerdy not to touch her. She and Guerdy are now invading each other’s space and are childishly saying, “Stop touching me.” Guerdy and Adriana claim to be afraid of each other’s loud voices.

Julia bizarrely keeps kissing Adriana until she stops talking. She cannot believe these two fight worse than her chickens do. Alexia thinks that Guerdy is being a little overwhelming. Nicole just wants to have whatever stimulant Guerdy is on.

Adriana says no one likes Guerdy — Martina says she does. Guerdy asks Alexia if she is living her life to the fullest at a level seven. Alexia looks permanently perplexed and does not follow, which further frustrates Guerdy. Adriana thinks that Guerdy is a drama queen when she turns on her waterworks. Guerdy says her happiness comes from lots of sorrow and keeps getting interrupted. Martina does not want this conversation to become about comparing hardships. She politely asks Guerdy to continue her story.

Guerdy breaks down and shares how she has had a lot of sorrows and leaves the table. Adriana thinks that Guerdy needs to be the center of attention. Takes another drama queen to know one! Nicole goes to check on Guerdy, and Lisa follows. They decided to go back to the table and do what they should have done all along and just celebrate Julia’s birthday. Phew, that dinner was just a lot and Martina’s facial reactions were priceless. Is she sorry she signed up for this?

Next week, Adriana wants to make some money doing MyFans, so she does not have to put out for cash anymore. Todd and Peter go at it over Peter drugging Frankie, gulp, many times? I hope all of you Blurbers have a happy and healthy New Year!