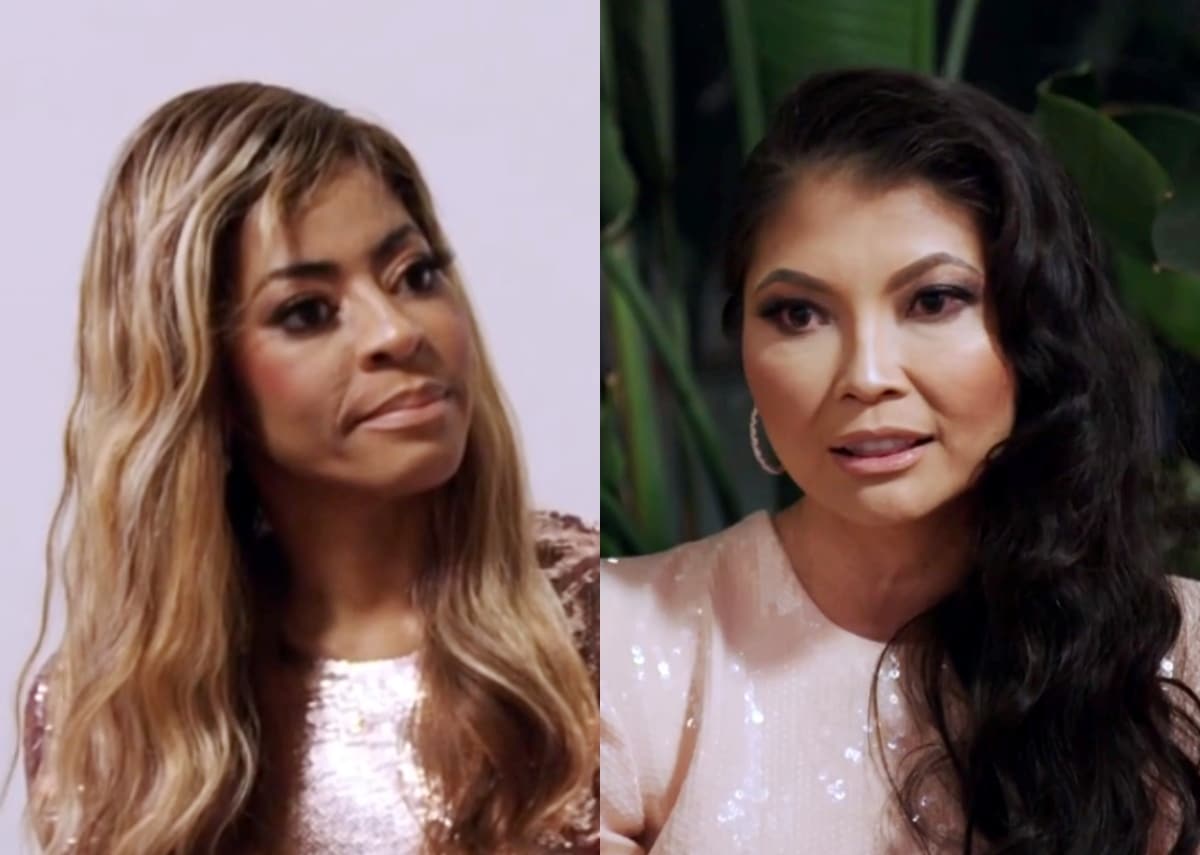 On this episode of The Real Housewives Of Salt Lake City, Whitney is planning a big event for her rebrand, which literally cost her (husband’s) life savings, and Jennie has decided that Mary has gone too far with her comments and decides to (try to) hold Mary accountable. How will that end?!

Jennie is visiting her hubby, Duy, for some lunch… on an adjustment table. Jennie explains that she enjoys popping in on him to mainly make sure there are no sister wives hiding in the office. She fills Duy in on her terrible pho luncheon and puts an emphasis on the part when Mary told her she loves her “beautiful, slanted eyes.” Talk about an insult… that also comes across as racist. Jennie intends to talk to Mary and let her know that her comment was not appreciated.

Mary meets up with Meredith for lunch, and Mary applauds Meredith for her behavior at the luncheon. Mary felt as though Jennie came after her (…Mary used a “character” voice to depict Jennie’s anger), and she believes that she is Jennie’s punching bag. Meredith listens quietly and lets Mary know that Jennie has a bit of a temper, and to that, Mary suggests Lisa “check her friend” Jennie.

Speaking of Lisa, Meredith explains that listening to Lisa sing Jen‘s praises is a bit triggering. Meredith has a hard time when Lisa states she is Meredith’s best friend, yet Lisa never stands up to Jen about what she did to Brooks in the past. I’m sorry, but didn’t Jen and Brooks make up??? Also, Who IS Lisa to Meredith at this point?!

Lisa’s oldest son, Jack, is going to prom and Lisa is going big for this event. She has hired a professional photographer for memories (of course) and micromanages the entire photoshoot. How embarrassing to have this prom date moment filmed for national TV… this poor kid and his date!

The launch of Wild Rose Beauty is just days away, and Whitney is a hot mess express. Luckily, her cousin, Heather, is there to help her get situated and organized. Whitney is more concerned about branded pillows than she is about stuffing gift bags. She shares that she has officially gone through her family’s entire savings. Whitney’s husband, Justin, is stressing about this fact, and when you invest so much money into a company and have yet to see some return, it truly is a big risk.

Whitney explains that she is inviting all the ladies from the group, even Lisa and Mary. Heather ponders, “Do you think Mary had something to do with Jen getting indicted?” And Whitney does point out that Mary was not on the bus that infamous morning Jen was arrested. It is not out of left field to imagine that Mary would do this to Jen, considering all the sh*t Jen did to Mary in the past (see past memes created by Jen). Whitney further ponders if Meredith told Mary what she knew and passed the baton over to her… cleaning her hands of the drama and putting Mary in charge of outing the info. “And that’s why Meredith and Mary were not on the bus with us.” Hmmm…

Jen’s mom has been her rock since the arrest. Jen claims that doing good for others helps keep her mind off of the legal drama in her life, and so they begin to put together some hygiene packs for the National American Tongan Society. What an attempt to clean up your image, Jen! Jen states that she has a team of three attorneys who are very expensive, so she is going to be downsizing, just like her husband, Sharrieff, suggested. Jen’s mom shows her support for her daughter, and Jen tearfully cries how she was supposed to be the one taking care of everyone. Jen claims she felt the pressure of her culture to help her family, and now she is upset she can no longer provide for them. After learning that Jen’s mom cashed out her retirement and then some, her mom tearfully explains, “How can I enjoy life if things don’t go right for you?” Tearjerker.

It’s the day of the Wild Rose relaunch, and Whitney is stressing. Besties Mary and Meredith travel together while Lisa explains to her husband that Meredith’s “energy has shifted.” As the event gets underway, we learn that Jennie is returning Mary’s boots. Jennie realizes that Mary’s “gift” is not genuine, and so she is giving them back. Props to her for not being fake…

Mary is busy complaining about where her coat can go, and when Jen and Sharrieff enter, Meredith becomes bothered. She reminds us that she has said over and over not to invite her to events that Jen will be attending, yet that’s a nearly impossible feat when you are on a franchise where you are PAID to be around people, huh? Whitney arrives late because she ripped her dress and had to get sewn into it. Also, did you all catch Duy saying she has a “doctor of love?!”

Jennie wastes no time and pulls the ladies aside to talk quietly in the back (because this is an appropriate time to confront Mary). Now is not the time or the place, but Jennie addresses Mary’s comment about liking her beautiful, slanted eyes. Jennie states that she felt insulted by it, and to that Mary states, “Really? I like slanted eyes.” Jennie demands that Mary take some responsibility for her inappropriate statement, and Meredith remains neutral by saying she didn’t see it as insulting. Mary apologizes, but Jennie still gives back the regifted boots. Jennie states that she knew the shoes were meant for Jen (courtesy of Lisa), and Jen has ZERO problem taking the boots that were “meant” for her (probably so she can pay off her three attorneys…).

Although she is hosting a party, Whitney sticks around a few more minutes to remind the women that they all need to be kind, after all, she likes her “friends like I like my skincare: non-toxic and cruelty-free.” Lisa jumps on this and reminds Mary that she made the comment, “I’m not like Jen, like a Mexican thug.” Whitney just wants everyone to stop saying cruel things about each other, and Meredith uses this as an opportunity to remind them all that Jen needs support and friendship. Unfortunately, Meredith has too much pain being a real friend to Jen at this time, but that doesn’t stop Meredith from wanting all the women to be treated with respect.

Mary denies she ever said that about Jen and gets frustrated when she gets called a liar, so she removes herself from the situation, and of course, Meredith follows her as she runs off. Meredith is over the fact that everyone wants to fight and argue, and so she is planning on leaving the event with Mary.

Lisa attempts to talk with Meredith before she hightails it out of there, but she gets shut down, and when Lisa corners Mary, Mary reminds Lisa she “doesn’t have to do anything,” especially talk with her. Lisa continues to follow Mary as Mary essentially runs away from her. Mary lets Lisa know that sometimes she comes across as two-faced, but Lisa reminds Mary that she DID say that about Jen. In her confessional, Mary seems to think she MAY have said that because Jen’s arrest reminded her of a cartel arrest, so maybe that is why she called Jen a Mexican thug. Juuust wondering if Mary is aware she is getting filmed for TV??

As Whitney attempts to make an emotional speech about how everyone in the room is so important to her, Mary and Lisa are busy trying to smooth over their rocky relationship. Lisa claims that Mary is being defensive cuz she knows she is wrong, and Mary turns the conversation so she can be the victim. She does not appreciate Lisa questioning her church and saying one thing to her face and another to the rest of the group. Mary states, “I thought higher of our friendship than that.”