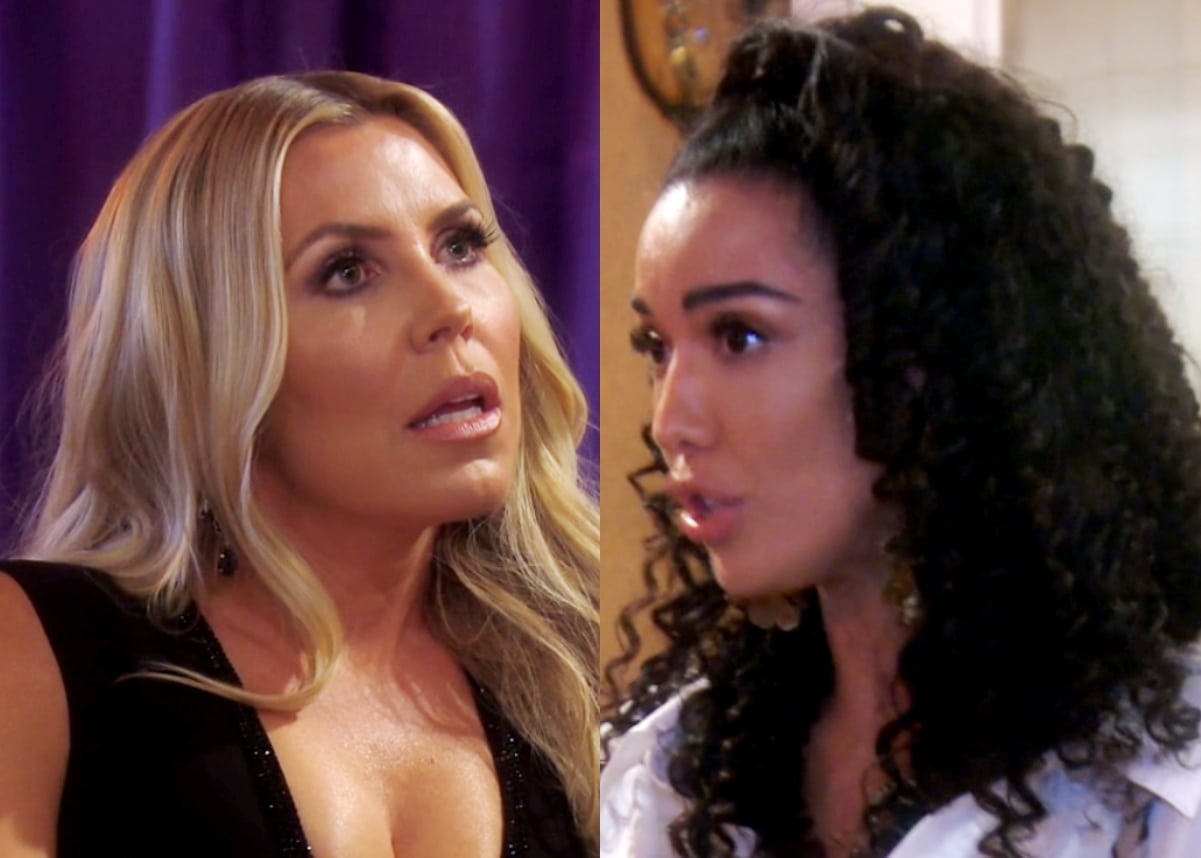 On this episode of the Real Housewives of Orange County, smoothing things over seems to be the name of the game, but that is certainly easier said than done with this group of women. Noella is the name in everyone’s mouth — good, bad, or otherwise — and she is certainly not shying away from letting her feelings be known.

In case you forgot, while at Emily’s party, Heather went all mob boss on Shannon when she promised to defend her family to the end. Heather calls what Shannon did to her a “big FU,” and she believes that “Shannon is crying because she got caught.” Despite the issues, Heather is willing to move on and requests that Shannon apologize to Terry because that “would be appropriate.” It appears Heather is Shan’s teacher, scolding her and grading her on her behavior and antics. When Terry sits down with Shannon, he hears her out and accepts her apology. Hallelujah.

But let’s be real… we know this drama is not over. Shannon is reeling from Heather’s threat, but luckily, her boyfriend, John, is there to console her as she continues to cry despite “making up” with the Dubrows. Seems like this is gonna be one of those storylines…

In the meantime, Jen is trying to figure out what is going on with Noella. There appears to be some tension between the ladies, and so Jen confronts the issue head-on and seeks out Noella to talk. Noella explains that she has only met Jen twice (superficially), but recently, Jen has done something to make Noella twitch.

Evidently, Jen took a “poorly lit” selfie, thanked her patients, and tagged Noella. Noella is annoyed since she works solely with one doctor (and it’s not Jen), and therefore, Noella thinks Jen is thirsty and weird. (I’m sorry, but didn’t Noella repeat that she had a sex dungeon over and over and over again, but who is the thirsty one??) Noella muses, “Who tags somebody that they met twice in a photo of themselves that’s not even a cute one?” OMG. Is Noella a child? She further tells Jen to “try and be relevant somewhere else.”

Jen is shook by Noella, and Heather comes to her side. Heather understands questioning Noella and her behavior since Heather has learned that Noella apparently called her a “fake b*tch.” Interesting that Heather is willing to ignore this tidbit of information about Noella, yet she ripped Shannon a new one for telling a true story about a lawsuit to her friends.

Because Noella just can’t seem to let Jen off the hook, she comes back for round two, calling her a rude little girl, before Heather is able to separate the bickering women and direct the ladies to the table. Over dinner, Heather invites Gina and her boyfriend, Travis, to the racetrack IN FRONT OF the other women. Shannon is irked and maybe, just maybe, Heather isn’t all that fancy pants cracked up to be, huh? Emily gives a toast to Shane for finally passing the bar, and then the party really gets started with some belly dancers. Everyone gets in on the action. Even Terry and Heather body rock to the music.

“Gene, the Machine,” aka Shannon’s dad, is dining with Shannon and her kids. Sophie, Shannon’s oldest daughter brought her boyfriend, Reese, along for the entertainment. Gene tells stories about Dean Martin that go right over the girls’ heads, and then he suggests that Shannon spend more time with him once the twins head off to college. Shannon feels guilty about not putting in QT with her dad and then goes off about the importance of family.

Speaking of family, we get a taste of nightlife in the Dubrow house. Terry takes approximately 137 pills, Heather runs from room to room checking in on her kids’ schedules, and her daughter, Max, is prepping for her book party. Max shares that the book is for teens and their parents and states that she is lucky to have such a great relationship with her parents. Because of that, she was able to come out to them and feel comfortable — something that all people should be able to do.

Noella is another housewife who loves energy healing, much like Shannon. The two ladies meet up, and Noella can hardly wait to talk about Jennifer. They bond over the women they don’t like (very mean girlish), and Shannon vents about her interaction with Heather. When Shannon meets with the healer, it is evident that she is stressed out. Shannon blames it on her fear of failing her kids and not being able to provide for them, but I would bet it has to do with her focusing all her energy on Heather Dubrow.

Wait — Nicole shows up at Jen’s house with a $3,000 suitcase filled with cheese. This is weird. You should never fill up a Louis Vuitton with charcuterie! Emily and Gina join the gang, and they sit down with a beast of a cheese board and some wine. The consensus is that everyone seems to be confused by Noella, Jen especially.  Jen can’t seem to figure Noella out and questions if Noella and her husband are actually married. That is quite a “salacious thing” to say about someone; however, it would make sense why Noella dislikes Jen — she knows about her fake marriage??

Emily suggests Noella should listen to a “raw and real conversation” and that she is an angry person going through a lot. Perhaps Noella needs to talk to a professional, but Jen believes that Noella is too far gone for any of that. And so the rift between Jen and Noella deepens.

Shannon phones her mother and they discuss her upcoming trip to Nashville. She realizes that she has to make time to see her mom because she is lucky to still have her in her life.

It’s a day at the track for Heather and her guests… including Gina and Travis, her new besties. Gina and her honesty are incredible… love how she admits she didn’t even know there was a winner’s circle. Gina has high hopes that Heather could adopt her (me, too, girl… me, too) since the lifestyle Heather lives is so luxurious and grand.

While betting ginormous sums of money (Heather, not Gina), Gina shares that Noella warned her to be careful of Heather. Heather doesn’t like that Noella is so distrustful because Noella doesn’t even know her. Heather feels uncomfortable now because she invited Noella to Max’s upcoming book party, but she now is second-guessing their relationship. After some gossiping, it’s a cause for celebration when Terry wins a race and God knows how much money… looks like Heather is getting a jet!

Emily goes over to Noella’s house to catch up and check in with her. Noella whispers because she claims when she gets stressed, she loses her voice. Kinda odd. She fake cries about being served divorce papers with flowers and then tells the story of how and why it went down that way. This would be the second time papers were served to Noella  — the first time, her mother answered the door, and technically, Noella needed to get the papers. Her soon-to-be-ex-husband got hip to the game and realized if he sent flowers, then he could be sure Noella was the one who answered the door. Tricky!

Noella explains that for the last six years, they have been doing husband and wife life, but have only technically been married for one year. Emily wants to get right down to the tea and begins spilling. She tells Noella that Jen has been publicly questioning if Noella was ever really even married to begin with, and to that, Noella scoffs. She calls Jen an “inauthentic person” and explains that in order to get divorced, they have to be married first. Noella states that she is leaning on Shannon, Emily, and Gina through her dark time, and together, Emily and Noella throw out the divorce flowers.