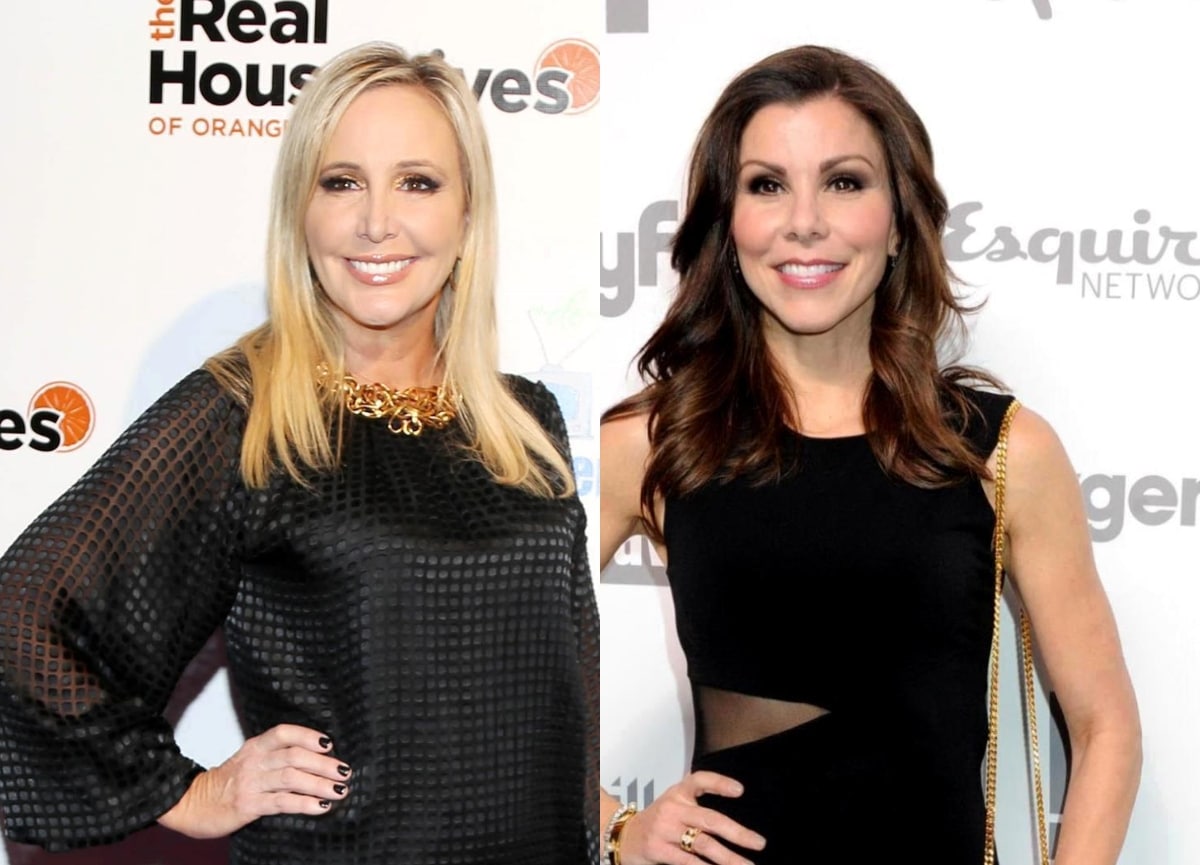 Bombs were dropped on The Real Housewives of Orange County after Gina Kirschenheiter told Heather Dubrow a little secret: Shannon Beador was discussing a lawsuit involving Dr. Terry Dubrow. His wife Heather was less than pleased.

“If you ever come after me or my family ever again,” Heather told Shannon in the dramatic final moment of episode four, “you are going to lose a lot more than just my friendship. This will cost a lot. And I’m not saying this as a threat. I’m saying this as a promise.”

In an interview with ET, Shannon shared her thoughts about that moment. “I was absolutely floored, I really was… She did threaten me. And accusing me of going after her family, taking it to that next level, for the things that she said to me, going through my head was, ‘Are you gonna kill me?!’ Are you going to try to take away the business that I’ve created to support my children? Because that’s you threatening my family.”

Shannon believes, however, that the moment was practiced by Heather beforehand: “There was another part of me going through this [saying], bravo! How many times did you practice going through this in front of the mirror? Because it seemed very scripted to me.”

Shannon stated that she was upset by Heather’s response. “It makes me angry, because it’s not that I ‘got caught.’ I didn’t get caught doing anything!” she explained. “I said it from the beginning. Gina gives an explanation that she had to tell Heather — felt she had to tell Heather — because at one point in her life, she was at a barbecue and everyone was whispering about her husband having an affair, and I can relate to her.”

“That’s a horrible story,” she said. “It happened to me, too, people whispering about me at parties, talking about how [my ex-husband] David was having an affair and I didn’t know. But nobody was whispering at Heather’s party. Nobody knew about it. So, it should never have been brought up by Gina, there’s no justification for what she did, except to stir up drama.”

Shannon also hinted that Gina wanted to bring it up on screen: “[Gina] even said on Watch What Happens Live, she said to Andy [Cohen], ‘You can thank me now, Andy!’ She had a big smile on her face. I didn’t have any smiles on my face for any of it, because I didn’t want it to come out. And for Heather to not know that that’s who I am? It’s upsetting to me.”

Shannon explained that it is difficult for her to watch the show, saying, “I just don’t know what other people are saying behind my back… There are some things that are being said about me that are upsetting.”

But her relationship with Heather and Gina is “cordial” now. “We all get along,” said Shannon. “I’m not in a major argument with anyone today.”

However, Shannon also warned that Heather will come for her later in the season: “I’m not gonna lie, she comes after me this season that she doesn’t come after other people for, and I fight back when that happens… My very first season, I had issues with both she and Tamra [Judge] as a first-season Housewife. That was pretty, pretty difficult, but I did it. I handled it.”

The Bravo star reacted to Kelly Dodd’s claim that Shannon is afraid of Heather. “That bothers me that [Kelly] says that about me, and I haven’t had a discussion with her about it yet,” said Shannon. “No, I’m not afraid of her at all. Not at all. I do feel badly about what happened, that that information from 20 years ago got out there.”

Shannon also addressed the social media war between Noella Bergener and her husband James, whom she is divorcing. “I’ve texted with [Noella] a little bit,” said Shannon. “And I just say I’m here for her if she needs anything, because I know how difficult it is… My position is always not to argue with anyone on social media, because then people weigh in and have opinions and it’s none of their business.”

She went on to say, “So, I feel bad for her that it’s public, but I think he went out there and made some videos and I guess at some point you feel you have to respond. It’s a nasty situation.”

The interviewer pointed out that Shannon was the only castmate who followed James’ Instagram page, where he’s been posting his side of the story. “I must’ve pressed follow by mistake,” said Shannon. “Because I didn’t intend to follow it. Shoot! I better unfollow it right now.” At that point, the Bravo star took out her phone and hit “unfollow.”