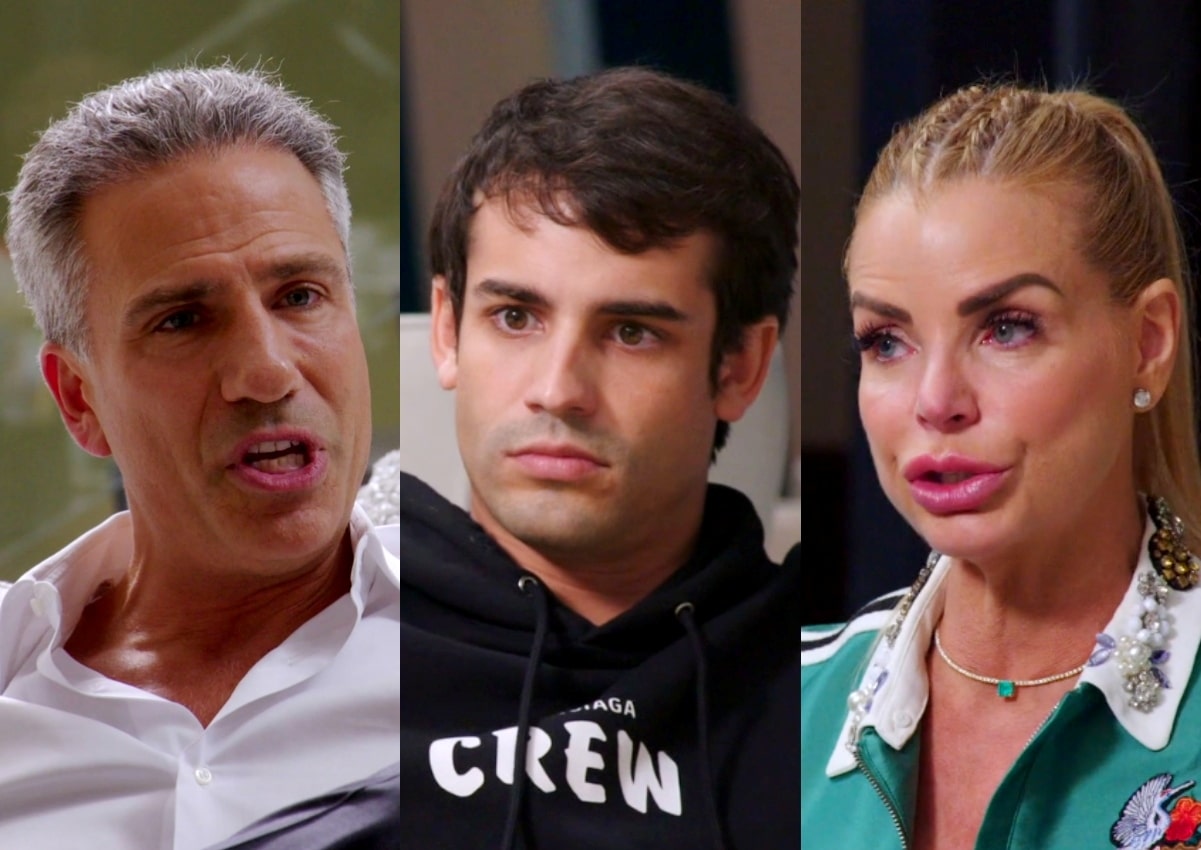 This episode of the Real Housewives of Miami is aptly titled “Family Therapy.” Can Todd and Peter coexist without coming to blows over Frankie? Do Todd and Alexia have a shot at making it to the altar? Let us watch and see!

Martina and Julia are chatting at their farm, and Diva the goat is not being game for milking. Julia is not having success with Diva’s udder — perhaps another housewife might be interested? Martina is still a little peeved about not getting a foot massage. She cannot understand why Julia will touch a goat’s udders but not her feet. Julia tries to explain the differences between her friends Adriana and Guerdy. They are like a cat and a fireball according to her. Martina is rolling her eyes when Julia is describing these two rival divas. She does not see any resolution between these two strong personalities, and there will be no kissing and making up.

Guerdy and Russell are having a date night. They are opposites, and she compares them to Han Solo and Princess Leia. Guerdy shares what went down at the birthday party with Adriana. She was not allowed to share with the group what events have defined her . Why does she see Guerdy as the low-hanging fruit? Adriana should be focusing on Nicole, who has not really brought much other than having a father who served time in prison and a significant other who does not want to marry her.

Guerdy then shares with us the story that she had been trying to share with the group. She lost her brother and his two daughters, who died in the earthquake in Haiti. That was horrifically tragic and living in South Florida I saw firsthand how it affected friends who lost family members there. Russell is awesome and I love his quiet nature and good advice. Guerdy, I do not agree that Russell is dorky. He is a keeper and the perfect person to counterbalance you.

Marysol and Steve are having dinner at Juvia with Alexia and Todd. She thinks Alexia loves Todd since he is like her but with a d*ck. They are getting trashed waiting for them, and finally, they arrive 45 minutes late. Marysol wants to talk wedding plans and needs to know what Alexia wants for her bachelorette party. Alexia is still having an issue with finding a venue for her wedding, and Todd is pushing her to settle on something. She shares in her ITM that she is dragging her feet since Todd and Peter are not getting along, and she cannot unite her family until they work out their differences.

Larsa is having Adriana and Kiki and her precious baby Summer over. Adriana is now considering the OnlyFans account and wants to start with her feet. Larsa does not think that Adriana has what it takes to make money on this after checking her social media. She thinks Adriana’s gnarly foot pics are only worth $5. Adriana does not agree with her and thinks pictures of her are more valuable. She needs to take a hard look at herself since she might not be up to par with what is already out there on this site. Larsa allows her kids to take her photos for the adult site. They think the site is just for moms who like to take bikini pics. Sure, her kids are not on to what is really going on now in social media. #delusional

Adriana and Jacob are still together, but the sex clock is still ticking, and he still has six weeks to go. The producer in her ITM sounds extremely interested in hearing more about Jacob’s, ahem, member. Adriana and Jacob are shopping for an Alfa Romeo for her. Julia arrives, and Adriana wants them to have a car buying experience as a threesome as well as a real one. Adriana is looking at Julia for exploration since she has not had good luck with men. She looks awful in this scene with her greasy face, and it is surprising she scored someone as hot as Jacob. Adriana ends up buying a red 1985 Alfa Romeo, so her storyline so far is stale.

Alexia, with her insane ocean view condominium, and Todd are chatting about her mom and how she is not mobile. She wants Todd to talk to her about becoming more active. Alexia shares that she found, with the help of her rich friends, a $30k diamond wedding band. Todd does not seem too keen on such an expensive purchase for just the band. He then shares that he and Peter had a friendly conversation. Alexia wants the two most important men in her life to figure it out. Based upon the previews, it is going to get uglier before there is any resolution.

Lisa is meeting up with Larsa for lunch. She thinks that Larsa is authentic except for her fake boobs. Now, it is freaking hilarious that that is how they perceive each other. Lenny is superman to her, but she wants to do something for herself other than being a mom. He assumes correctly that she does not have any responsibilities. Lenny is like the party police when she needs to put her cocktail down. Larsa is sad that her marriage to Scottie failed since she wanted a traditional family life for them. Side note: I saw Lisa on WWHL, and she said she was addicted to fillers and how she looks now makes so much sense.

Nicole and Anthony are at the Sea Grill for dinner. They are both foodies and live in the best city for that. Anthony orders a lot of food, and it sounds amazing what he orders. He is asking about the art he purchased from Martina’s art show. Anthony was surprised that Adriana was not prepared for the group that came. He thinks this friend group makes them feel very normal. Nicole shares with Anthony how odd the relationship between Adriana and Julia is. Anthony does not like drama, so he is obviously not on the right show nor interested in hearing this nonsensical drivel. Side note: I love Nicole’s cuff in this scene.

Peter arrives, and they are chatting about the wedding. Alexia wants both boys to walk her down the aisle. Alexia does not want any bridesmaids since she wants to make it all about herself. Shocker! Todd and Peter are chatting about what happened when they had their altercation. Alexia and Frankie step away, and seeing Frankie holding onto Alexia is the sweetest thing ever. Peter is crying when Todd is telling him how he felt when Frankie had EMS treating him. Frankie is not the typical 24-year-old, and he is trying to get Peter to understand it. Todd does not think they are doing anything productive for him. Peter defends himself by saying he has had to wash Frankie’s a*s and shave his armpits. Todd cannot understand why he does not have time to play basketball with Frankie but has ample time to smoke weed with Frankie.

Todd asks Alexia what she has done to help Frankie. Alexia wants to know what he does for him. She is getting pissed because she is getting called out for defending Peter and not getting Frankie the proper help.

Todd does not want to be the bad guy, and he thinks Alexia is an enabler. He does not want to take Frankie to work as an intern just like he did with Peter. He does not want to go down that road with another child of hers, but he would have more luck with Frankie IMO. Todd wants them to accept that Frankie is disabled, and Peter is a loser. Peter does not want Todd to say another word, or he will beat him up. He thinks they are stuck on the hamster wheel, and they are on a dysfunctional team that needs therapy. Todd apologizes if the delivery was not sexy. Did they really have to have this discussion in front of Frankie? They decide to hug it out for now, but Alexia, get your family some therapy!

Next week, Julia and Lisa are making out. Guerdy must deliver some unwelcome news to Alexia. Happy New Year, Blurbers, and see you next week!