RHOSLC Recap: Jen Attacks Lisa During Heated Argument, Plus Heather and Whitney Are Suspicious of Mary and Meredith 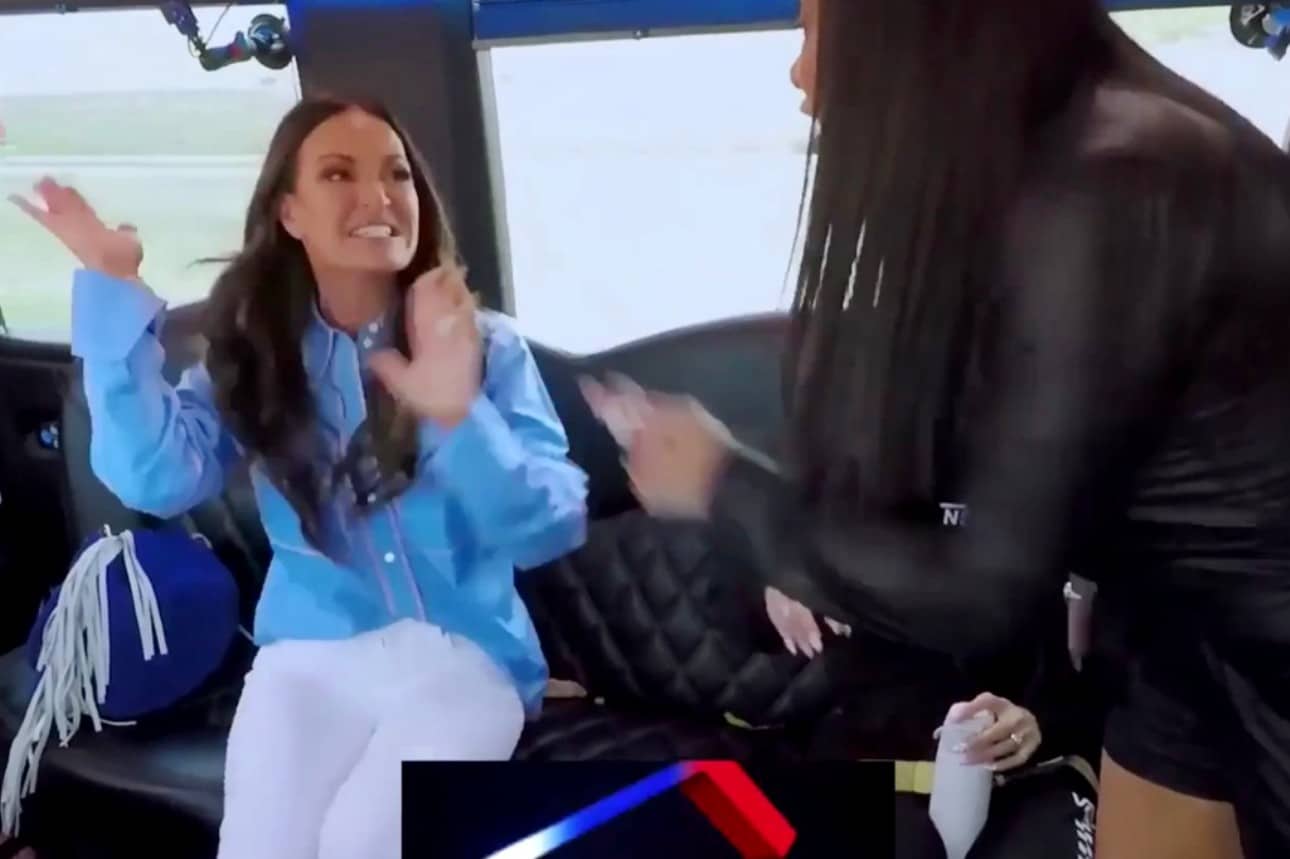 On this episode of The Real Housewives Of Salt Lake City, Meredith throws Seth a party, and the ladies are gifted a Mother’s Day trip. All seems well in Utah until Jen unravels and Lisa bears the brunt of her anger.

It’s a husbands’ day out and the guys are golfing. This crew is no Jersey househusbands, but they do their best keeping up with Seth and his zinger remarks. Whitney‘s husband, Justin, reminds the gents that Mother’s Day is just around the corner and perhaps they should ship their wives off for a trip… this sounds like more of a gift for the guys, but I digress. They also discuss Seth’s upcoming 49th party and what the birthday boy wants: “cleavage encouraged.” Gag.

Heather and Jen meet up for a spa day. This is Heather’s way of showing support for Jen since she doesn’t feel like whipping up a casserole. They toast and begin talking about the recent drama. Jen claims she was confused by Meredith sticking up for her at Whitney’s event but is even more perplexed to find out she did not receive an invitation to Seth’s birthday party. Like, Heather, you KNEW Jen would not have been invited. Why would you bring that up other than to stir the pot?

They also discuss the recent friendship between Meredith and Mary. They believe that Mary’s statements are not in line with Meredith’s beliefs, and it is odd that Meredith “disengages” any time anyone tries to bring up Mary’s flaws.

Heather tells Jen that Mary told Lisa, “Look what happens when you mess with my church, you go to jail!” Heather proceeds to question if Mary had anything to do with Jen’s arrest, and Jen finds it very coincidental that Mary did not come to the Beauty Lab parking lot on the day of the arrest. “It seems like Mary and Meredith know more than all of us.”  This is getting exhausting. Don’t these ladies realize that Homeland Security and the Feds don’t NEED to be directed to the location of the subject they are actively investigating?!

It’s the day of Seth’s birthday party, and CLEARLY, Meredith followed Seth’s only request: cleavage. Teddy, Meredith’s dog, made the guest list, but Jen Shah did not. Burnnnn. TBH, this might be the weirdest party. There is ONE dancer in the shallow end of the pool and shirtless pics of Seth on the goodie bags. Woof. When Lisa rolls up, it seems like she is back in good graces with Meredith. They are air-kissing and hugging like nothing ever happened, and Heather is annoyed that everything is seemingly OK.

Mary is outwardly ignoring Jennie because “Jennie deserves to be ignored,” but she makes her way over to Meredith for a couch sitdown. According to Meredith, it felt like an attack on Mary at Whitney’s event. Meredith explains to Mary that Jennie’s feelings are valid, but the shoe-thing… she doesn’t understand why Jennie would return the shoes. Mary reminds Meredith that Lisa told Jen that the shoes were not for Jennie originally and “that’s when the culture-sensitive stuff” came out. Meredith ponders why Lisa would say that to Jennie, and Mary assumes that it is because Lisa is jealous of the new friendship between Mary and Meredith.

After the ladies lovingly sway together and sing “Happy Birthday” to Seth, Duy gets on the mic and shares that the husbands have gifted the women a villa in Zion for Mother’s Day. Jennie asks if Jen is invited, and the answer is… yes. Meredith is less than pleased to be celebrating Mother’s Day with “Momma Shah.”

Jen claims to be the best student in all her therapy sessions and has decided to apply the assignment to real life. And so, she has Coach Shah busy painting his feelings out on the canvas. While working on arts and crafts, they discuss Jen’s house hunting prospects. Coach Shah lets Jen know that she deserves to relieve some stress, and so she is invited on the Zion trip despite the recent “feud” with Meredith.

Over at the most awkward party ever (somebody better tell Jen she ain’t missing much), Whitney comes walking over (without dropping the cake …this time) with a boob cake for Seth. Apparently, Seth has a great appreciation for Whitney’s rack, and so Whitney brought a gag gift cake in the shape of breasts just for him.  And if that’s not weird enough for you, Lisa mentions casually that her older sister dated her now-husband, John. Wait. I need more information on this topic ASAP.

Heather and Whitney take a moment to address the fact that Jen was not invited to the party. They probe Meredith, and Whitney asks, “Is there more to this story that we need to know so we know what we’re dealing with?” Meredith calmly states, “Of course there is.  I’ve said a lot already.” Look at Meredith putting her law degree to work… looks like Whitney is gonna need a subpoena to get the info she wants from Meredith. At the end of the party, all of the clothed women join Seth in the hot tub, and he claims this to be the best party ever.  I would have to question his past events…

The Mother’s Day getaway is about to begin, and the infamous big van arrives to drive the ladies. Poor Kevin, the driver, that was with them when Jen Shah got arrested, is back for more action with these ladies. It’s a bit like déjà vu. Jennie states that she is having some PTSD, and they have hopes that the FBI is not coming to raid the place this time. Jen is just thrilled to have made it onto the bus this time, and Lisa has her big cup of DC ready.

Mary and Meredith are nowhere to be found, yet again, and it doesn’t seem like a coincidence that the duo is not on the bus again. The women begin questioning Meredith about what she was doing in Vail the day of Jen’s arrest. Lisa states that Meredith was vague about why she was flying this time to Zion, and then begins Jen’s rant.

Jen shrieks that Meredith hired a private investigator and begins laying into Lisa. She reminds everyone that she got crucified last year when SHE hired an investigator, and Lisa calmly tells Jen that she doesn’t dig up dirt on people. Jen retorts, “I don’t either, but your best friend does. I don’t know why everyone believes Meredith.”  Lisa remains unbothered by a hollering Jen who is very clearly unraveling before the group’s very eyes.

Jen states that Meredith is trying to slander her name, and when she really wants to get a rise out of everyone, she yells, “It’s not my fault because she f*cking had an affair.” Jen demands to know why THAT is her fault.  Lisa reminds Jen that she is not accountable for what others do, and Jen demands Lisa sides up or doesn’t. Jen yells that Meredith is playing all of them and Lisa doesn’t want tension with Jen.

Jen is just tired of Lisa treating Meredith differently than she treats everyone else. Lisa is getting exhausted by this, but she reminds Jen that she has had her back. Jen wonders if she would afford her the same room for mistakes like she does Meredith. Jen gets all up in Lisa’s face, and Lisa tries hard to figure out what Jen is trying to convey. Trying to follow this fight is like trying to figure out why Duy would want a sister wife. I’m confused. And I am so happy that Lisa said she was, too!

Lisa tells Jen, “I’m shutting the f*ck down right now,” and Jen doesn’t like that at all. She gets in Lisa’s face and tells her, “Talk to your friend like this. Talk to Meredith like this.” When Jen lunges for Lisa, something tells me this is not how Jen is supposed to be acting while out on bail — and they wonder why Meredith and Mary choose to travel separately. To be continued…