RHOSLC Recap: Lisa Accuses Meredith of Cheating on Seth, Calls Her a F**king Whore and Labels Mary “Fake,” Plus Mary Tells Jennie She Doesn’t Like Her and Shades Heather 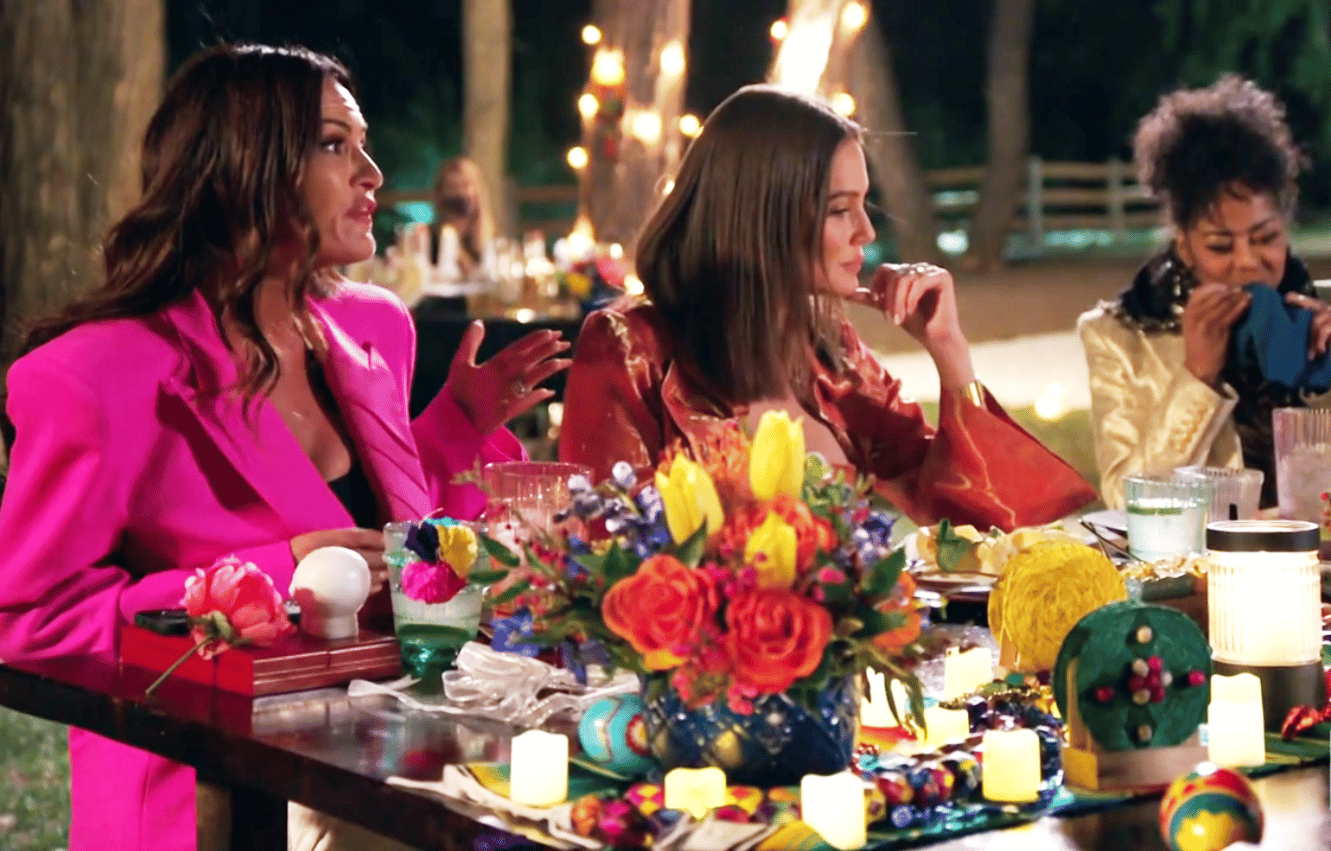 Over at the Red Rock Villa, everyone seems to be getting along famously. Heather believes there must be angels amongst them as it seems too good to be true that they all are on the same page for once. In the words of Meredith, “things are on a positive trajectory” on this episode of The Real Housewives Of Salt Lake City… at least for now.

The next morning, after a very LATE night, the women split up and go off in different directions. Heather and Lisa are off to ride horses. Yep, you read that correctly. Heather and Lisa. Hey, there’s a first for everything. Continuing the shocking twosomes, Jen and Whitney are heading out to ATV together. Crazy what a boozy night before can do to an estranged group of women, huh?

Post riding, Lisa and Heather sit down and discuss the high hopes that the duo can continue this positive relationship. Lisa spills about how rocky her friendship has been with Meredith as of late. Heather realizes Lisa’s perspective of this situation, and Lisa is grateful that Heather acknowledges that Lisa really DOES always have Meredith’s back no matter what.

This gets the ladies to chatting about Meredith — particularly Meredith’s curious absence at her dad’s memorial. Something is not adding up as Lisa and Heather have conflicting dates about Meredith’s father’s memorial. Wait, what?! The women debate when the memorial actually was. Could it be that there was NO memorial at all?!

Someone PLEASE get Whitney a wipe. The girl’s got dirt ALL over her face after that ATV ride. Jen and Whitney talk about how much fun they had last night, and Jen shares that she has not laughed that hard in a long time. Jen cannot wrap her mind around how Meredith went from ripping the ladies’ heads off to having a grand old time with the group. And then, the convo turns to Meredith’s dad’s memorial yet again. “If Meredith can lie about her own father’s memorial, where are your boundaries?” Whitney will not let this go. Whitney digs and wants to know more about Meredith’s life during her separation, and to that, Jen just shrugs.

They continue to ponder Meredith and Mary’s friendship, and Jen cannot get over how Mary says the meanest things to people and then somehow weasels her way back into the group. Meredith has a lot of the same behaviors that Mary does, and Jen states that they both want people to blindly follow them as truth, no matter what.

The three duds, I mean ladies, roll up to the spa. Mary, Meredith, and Jennie have decided to spend the day rejuvenating and refreshing. Post massage (fully clothed, if you are Mary), they talk about how the group’s dynamic has seemed to shift toward a more positive light. Jennie admits that she relayed the information to Jen about Meredith’s private investigator and acknowledges that it was wrong to do that.

Meredith asks if the ladies have talked to their husbands since they have been on the trip, and that opens the door to Jennie. She talks about how her husband, Duy, refuses therapy. TBH, I don’t really blame Duy. Jennie broke his rib, remember? When Jennie asks about Robert, Mary states, “That side of my life, I’m not comfortable talking about.” Way to make it weird, Mary.

The group becomes whole again as everyone returns home from their adventures. They take quick showers and get themselves ready for the Cinco de Mayo evening in honor of Mary calling Jen a “Mexican thug.” Before dinner, Meredith comes in to ask Whitney who is fronting the bill for this meal. If it is Jen, Meredith feels uncomfortable attending, since due to Jen’s federal indictment, she refuses to get involved with Jen’s illegal money spending. Whitney believes the husbands have paid for it, and evidently, Meredith has forgotten that she is on a show… that most likely pays for everything.

The women seem quite impressed by Jen’s party planning and the mariachi band. Jen thanks them for coming and gifts them all something she intended to bring to Vail. Because she did not make it there, Jen decided to bring the snowflake necklaces to this dinner. Remember that Jen’s mom is tapping into her retirement fund to help pay for Jen’s lawyer? Not a good look… Jen explains the significance of the diamonds on the snowflake, and it’s interesting that Meredith is accepting the gift, particularly because she didn’t even want to go to the dinner that Jen MAY have paid for.

Mary excuses herself to get warm, and Heather calls Mary a buzzkill. Jennie shares how Mary shut down the husband convo earlier in the day, and OBVIOUSLY, Meredith comes to Mary’s defense. She reminds Jennie that she doesn’t know Mary all that well. Jennie believes that Mary’s earlier apology was not genuine, and someone should remind Jennie that an apology doesn’t necessarily mean that a person wants to be your BFF.

Meredith suggests that instead of talking sh*t about Mary behind her back, the women bring up their issues to her face. Whitney straight-up asks, “Mary, do you like Jennie?” Mary responds that she does not (LOL) and calls Jennie rude. Jennie feels like MARY is the rude one, and Heather reminds Mary to be nice …that Jennie’s husband pitched in for the trip.  Mary makes a dig and reminds Heather that Heather does not have a husband… And to that, Heather retorts, “And who is your husband? It’s your step-grand-daddy.” BOOM.

Mary tells Jennie she will have to live with her insincere apology cuz that’s all she’s willing to give Jennie. Lisa whispers to Meredith that Mary’s behavior is unacceptable. Jen reminds Lisa to be consistent, and Lisa refuses to get this situation turned on her. She lets Jen know that this is not about her, but she is sick of “emotionally coddling” her “friends.” Jen storms away from the table because she feels as though Lisa is a double-standard.

Lisa tells the table that she is the most real friend in the group and reminds Mary that she doesn’t even know how to be real. Mary snaps back by yelling, “You’re still eating candy and you eat at Taco Bell. Who does that? Your kids and your husband need nutrients.” I am cracking up. Lisa reminds Meredith just how *kind* Mary is toward her, and Meredith tells Lisa that she will not stand up for her. Lisa goes off and calls Mary and all that she stands for FAKE. (Side note: Mary did straight up tell Jennie to her face that she doesn’t like her… that was authentic if you ask me). Lisa suggests that they all go look up Mary’s background, and she tells Mary, “You don’t even have a congregation. They’re all leaving.” Mary tells Lisa that she doesn’t invite the devil to her church, and Mary is beyond disgusted.

When Jen returns, Heather lets her know that Lisa is showing up for her. Heather is unsure how the group can move forward if Jennie continuously gets on Mary’s nerves. Why does everyone HAVE to be friends?! Jennie tells Mary, “I don’t like the way you talk. I don’t like the way you treat my friends.” No one can understand how Mary could treat these ladies this way when she is a woman of God. Mary believes that they are all God’s creatures and claims that the group is not nice to her. Whitney won’t drop it, and Heather wants to figure out why she won’t be friends with Jennie.

Mary believes that, besides Meredith, the crew is not really true friends. Whitney is curious about Meredith’s relationship with Mary, and Meredith tries to explain that friendships have different dynamics. Lisa is upset by the way Meredith is turning a blind eye to the way Lisa is being treated and blindly sticking up for Mary yet again.

Lisa walks away from the table and is beyond annoyed that whatever Mary does, Meredith continues to have her back. Lisa spits out fire about Meredith into a hot mic. (She can’t be friends with Meredith “cause I’m not a f*cking whore and I don’t cheat on my husband. Why don’t you own a house? Cuz your husband changes jobs. She’s f*cked half of New York.”) Whitney continues to pry Meredith for the truth. She asks once again if Meredith had a memorial for her dad, and Meredith states that she is not even addressing that. Don’t. Talk. About. My. Family. Of course, Mary is there chasing Meredith (any excuse to get away from THAT group, amiright??) and we are hit with a to be continued….