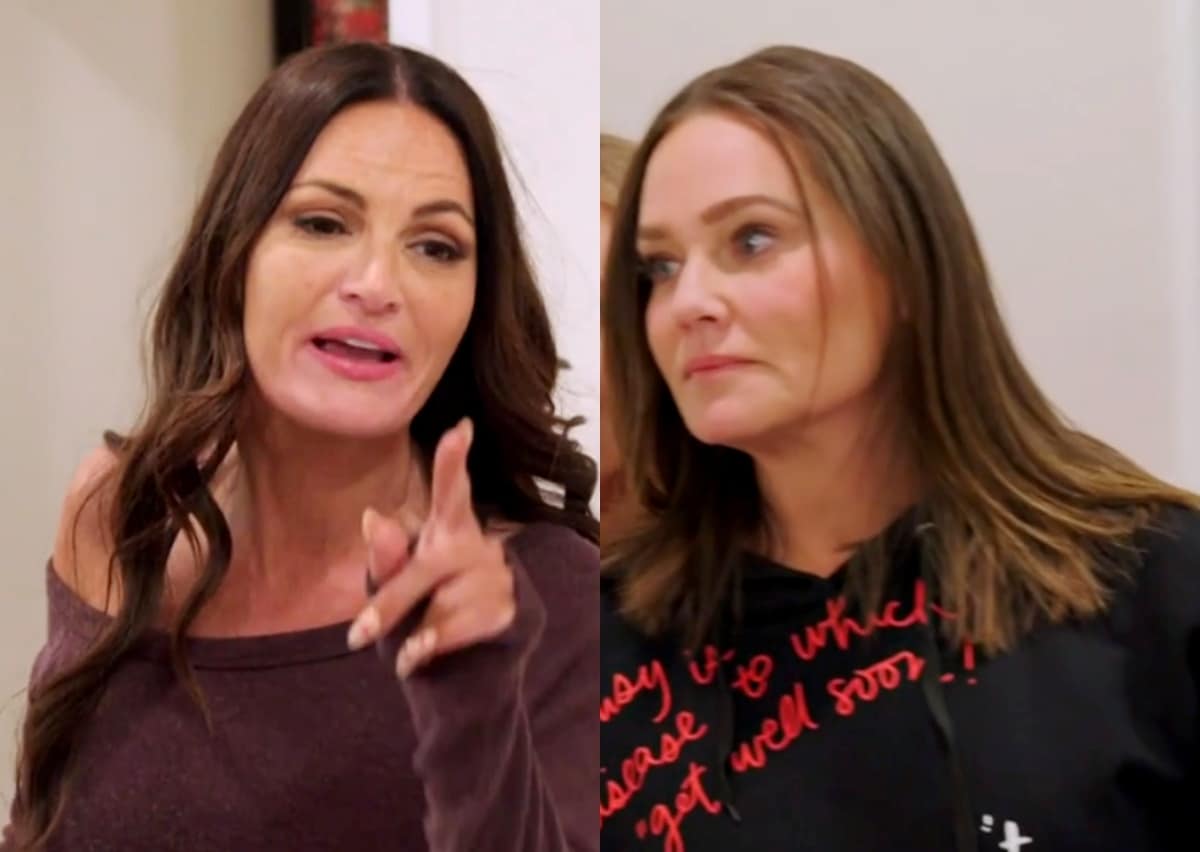 The Zion trip from hell is still unraveling on this episode of The Real Housewives Of Salt Lake City. Meredith continues to be the target, and Lisa has spiraled into a hot mic moment that will go down in history.

Lisa, her anger boiling over after storming away from the table, yells from the closet, “Meredith can go f*ck herself. Her and her dumb f*cking family that poses.” In the meantime, bestie Mary goes to check on her girl Meredith, who repeats over and over that she is done. Meredith is tired of the women questioning everything, including her own father’s memorial.

When Jennie goes to check in on a sh*t talking Lisa, Lisa lets Jennie know that she is over her too. Jennie did not have Lisa’s back during dinner, and Lisa is beyond annoyed that these women don’t know how to “show up.”

Lisa repeats that she says what no one else would say and as her voice rises louder and louder, the production security guard moves in closer and closer. Lisa is losing it completely as more and more of the group surround her in the bathroom of her room. She screams, “I’m richer than all of you, I don’t have to be here.” She is completely unhinged.

In the meantime, Mary stands in Meredith’s room, pondering about Heather and her big mouth acting uppity like a true Mormon. Mary states, “She don’t even know she look inbred.” Ooph.

Whitney barges into Lisa’s room and tells Lisa that she had her back… after she left. Lisa is annoyed and is feeling very alone. She thought Meredith was a true friend to her, and to that, Jen retorts, “I would be hurt, too, if my piece of sh*t best friend” treated her the way Meredith does. Heather explains that Lisa’s friendship with Jen is keeping Meredith safe, and Lisa melts down into tears (well, as close to tears that Lisa can come up with). Jen reminds everyone that Meredith only cares about herself. Annoyed that the party has fallen apart, she tells the women, “I didn’t crimp my hair on Cinco de Mayo” for nothing.

Whitney has a sit down with Meredith and tells her that she meant no disrespect, and Meredith insists that Whitney was VERY disrespectful. Meredith goes low and brings up Whitney’s addict father, and she reminds her that it’s none of her business. Meredith gets asked by Whitney if she should hire a private investigator to find out when the memorial for her father was. Shots fired. Whitney stands firm that nothing adds up, and as she passes Mary, Meredith’s bodyguard, I am pretty certain Mary puts a spell on Whitney.

Mary states that Whitney is out of her mind and is being mean (Hello, pot? Meet kettle). Whitney returns to the rest of the group and explains what happened when she apologized to Meredith. Jen calls Whitney her “b*tch” for standing up to Meredith, but when Meredith storms in to fix some things between her and Whitney, it gets even uglier.

Meredith calls Whitney to find out who is speculating about her father’s death. Whitney states that everyone had some questions about it, and when Lisa storms in the REAL “speculating” begins. Meredith is furious that Lisa speculated that the memorial never happened, and Lisa denies said speculation. Drink every time you hear the word “speculate.” Just kidding.

These women are UNRAVELING and Lisa refuses to apologize to Meredith for anything. If anyone should be apologizing, according to Lisa, it should be Meredith. Whitney calmly tries to explain that this is about the fact that Meredith stated the memorial was on two different days. It seems like a relatively easy question to answer, but Meredith refuses to tell the ladies the date of the memorial, leaving more to question. Although it is not that hard to understand: Whether the memorial was on a Monday or Tuesday, Meredith was not gonna fly back just to travel in the infamous Sprinter van to Vail.

Whitney demands to know where Mary is to defend Meredith NOW and storms around the house to find Mary. Mary tells Whitney that she is done with all the women and is exhausted trying to argue with someone who is drunk.  No one can understand why Mary even came on the trip if she doesn’t care about any of the group…

As everyone packs up, things are still not good. Whitney has a hangover (maybe Mary was onto something), and Jen reminds Whitney that she did good the night before — she was actually being honest. Lisa is sad about how things ended, and Heather tells Lisa that nothing has been resolved. Heather is steadfast that Meredith did not want to say the date because she did not want to be caught in a lie.

On a different note, Lisa calls the dynamic between Mary and Meredith “weird.” Heather states that Mary is openly, aggressively cruel, and she may be the least honest out of the group. Lisa is shocked to see the shift in dynamics from the friend group — if you can even call it a group of friends. I mean, Mary repeats that she is so done with these women and can’t get out of there fast enough. She refuses to hop into the Sprinter van and instead opts to travel in the SUV on the way home.

Three days later, Lisa “I’m richer than all of you” Barlow is promoting a tabletop grill, and Jen is deep in the legal world with her lawyer. She shares that she can’t talk to Stewart and is unsure what he is saying. They are considered a “team,” but Stewart can try and testify against her. Yikes.

Lisa tells her husband that there was a lot going on in Zion and explains that there has been tension between her and Meredith. It is laughable hearing her say she LOVES Meredith when just a few days before she was telling the world that Meredith is a whore who “f*cked all of NY.” Lisa believes that Meredith may be deflecting a little bit, but she claims that she needs to remove herself from being in the middle of her and Jen. She refuses to be a punching bag for Meredith and for the rest of the women for that matter.

Over at Mary’s church, she is holding her first service in about a year. Seems like there aren’t many parishioners there, but Jen joins the party because Mary invited her directly. The guy fanning Mary and the speech about Mary’s perfection is beyond, and Jen sits there watching this new side of Mary. Mary is a rockstar in the eyes of these people in her church, and Jen could barely keep a straight face as they fawn over her.

Later, Whitney can hardly believe that she is in a car with Heather going over to Meredith’s. She fills Heather in on how Meredith questioned Whitney’s father and his addiction. Things are certainly not well between the group, and Whitney believes that this little meet-up is a cover-up and a chance for Meredith to kiss their a*s so she can smooth things over.

The Meredith that opens the door is a completely different Meredith. She is warm and embracing Whitney and Heather… which is a far cry from the Zion Meredith. The women plop down on the beds, and they begin their electroshock work out. While the ladies are hooked up to the machine, Meredith apologizes to Whitney. Such a power move to have Meredith hovering over a stuck Whitney who cannot escape since she is attached to oodles of wires. Meredith lets Whitney know that her delivery sucked, but that she could understand why she came to her with those questions.

Meredith further explains that the memorial for her dad was on the 29th. And now Heather is curious why Lisa would start all this drama, as she was the one who stated that Meredith was in the middle of her father’s memorial while in the van to Vail (the 30th). Meredith states that she was not physically in Aspen on Tuesday, and it becomes apparent that Lisa is adding fuel to the fire between Meredith and Jen. Meredith wants to know if Lisa is really her friend, and at the end of the day, “If everything you guys are telling me is true, then I’m done.”