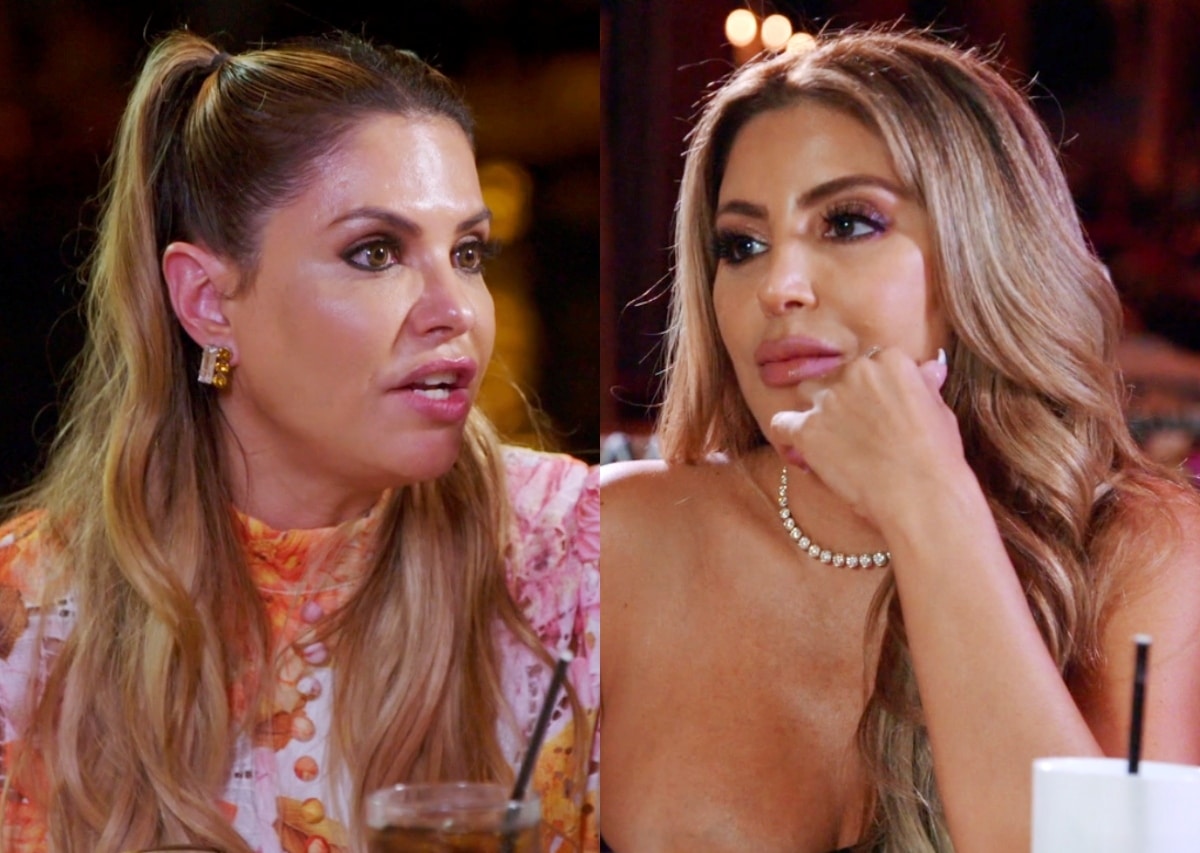 We join our Real Housewives of Miami back home in the vibrant city of Miami. Will the tension from Montauk follow them home? The dramatic wounds have been inflicted and there will be a lot of recovery before there is healing. Let us watch and see the process, shall we?

Martina and Julia are in their kitchen. She asks about the Hamptons trip, and Julia is evasive. Julia is not being honest about her drinking and the consequences she suffered. Martina seems to either already know the truth or is just letting it go. She is the best — cooking breakfast for Julia. I just love seeing how down-to-earth Martina is, and she is my favorite on this show besides Kiki.

Larsa visits Alexia’s beauty bar, which really looks like a nail salon. She heard that Nicole was hurt over the child out of wedlock comment. Alexia does not care to engage on that, and she pivots to why Lisa behaved badly on their trip. She feels Lisa’s rich girl problems whining over no nanny is not relatable to the rest of the world. Larsa is defensive over the out-of-wedlock conversation. She thinks she has the best relationship resume since she has been married the longest and had four kids in wedlock. So, does that mean she is allowed to be a judgmental snob?

Larsa then shares that Scottie will sign the papers to sell the house, but Sophia needs to move to LA. She is not willing to do that trade, and she thinks Scottie is being difficult to punish her. Alexia surmises that Larsa is too close for comfort with Scottie and no other man will want to be a part of that throuple. She knows a little bit about this with the man troubles she has had in the past and present. Side note: It looks like Peter has escaped prosecution from his domestic violence case. Big collective sigh.

Lisa visits Lenny at his office, and she grabs his phone to check it. Lenny gets DMs from other women about hooking up with them. Lisa thinks these ladies are crazy thirsty and she will not allow them even one sip. She wants to chat with Lenny about the nanny situation. Lenny’s parents are moving to Miami, and they are going to live with them until they get a condominium. He thinks they are too old to manage the young children. Lisa starts defending her especially important job of being the house manager and supervising the commoners employees. Lenny thinks her biggest decision is what Rolls-Royce will she drive today. He thinks she gets her nails, hair, and lashes done, and dear Len is on point. Lisa is having trouble finding a nanny who speaks English. I am not surprised since Miami is very multicultural and you hear more Spanish than English when you go there.

Nicole has Guerdy over to discuss her fashion for cause charity event. Julia arrives bearing eggs from her farm. Talk about farm to table — love this gesture. The gorgeous Kiki arrives looking very chic, and I do not understand why she was not made a housewife. They discuss the friend engagement and Nicole dreams of having a relationship like that.

Nicole thinks that Alexia and Marysol went after her at dinner out of revenge. She has been speaking up about Alexia being snotty with that tweaked nose in the air. Julia thinks what Larsa said about having kids out of wedlock was offensive. She cannot believe that women are being judged this way in this time and day. Me either.

Lisa is having dinner with Lenny’s parents, Marina and Anatoly. Lenny joins the dinner, and in his ITM, he talks about being a father. He loves his kids, but his wife… he seems to be on the fence there. Lisa and Lenny are going on a Saint-Tropez vacation to try and save their marriage. Lenny did not want to marry anyone who was like his mother. He thinks Lisa has evolved into Marina and that is his punishment for thinking that way. Lisa takes offense to this and must pull out of him something more positive about her. Lenny can only spit out that she is outgoing and says nothing about being a good wife or mother.

Larsa is meeting up with Kiki and Adriana at a restaurant. She stands up to greet them, and I swear I almost saw her crotch. Who needs to pay for OnlyFans — just follow her around and you will be sure to see a nip slip or a crotch shot for free! Kiki arrives and is on the search for cute guys, and she is looking for a wingman. She tells the waiter she wants two dicks on a plate. Larsa does not need to chase men — they need to pursue her. She wants bosses at any age if they have tons of cash.

Adriana shares what she wants, and it is a guy with a big D. She claims that the gynecologist uses the baby “spatula,” aka speculum, on her. TMI, Adriana, we do not need to hear any detail about your anatomy because, frankly, we have seen enough of those tatas. Adriana then shadily asks Larsa about what happened with Kanye. She wants to know why she and her BFF are no longer friends anymore. Is Adriana asking Larsa about this since she is suggesting there might have been some naughty shenanigans going on between Larsa and Kanye? Side note: She would not be the first friend of a Kardashian to swoop in and mess around with their men.

Adriana claims to have seen Kanye’s d*ck. She claims it happened at Art Basel in the bathroom. What was she doing in the men’s room? Did she just out herself about being there to service the “patrons?” Larsa thinks that Adriana says a lot of dumb shit and she is tired of it. She wants Adriana to change the subject. Larsa thinks it is disrespectful to tell this story about her friend. Kiki tries to intervene to get them to quit fighting. Larsa claims everyone in her life is a public figure. Adriana starts calling Larsa a bitch. She thinks that Larsa must have seen it since she acts like she has ownership of Kanye’s d*ck.

Larsa leaves the table in a huff. Adriana cannot understand why she is so defensive. Poor Kiki — she must sit between these two rival divas. She did not know when she was put on the call sheet that she would be in the middle of a d*ck fight. Kiki prefers her d*cks on a plate behaving nicely.

We have now arrived at Guerdy’s event to raise money for Haiti that is meant to honor her family. She wants to raise $25k to give back to her country. Guerdy is having an auction and a fashion show to raise money. She has her dad Louis and Russell present, which makes the event perfect in her eyes. Russell and Louis both seem to adore Guerdy.

Marysol arrives resplendent in yellow, and there are crickets from Nicole when she arrives. She thinks that Nicole will learn to manage this better once she gets older. Marysol is having Alexia’s bachelorette party at the Versace mansion. She is having a dinner and a sleepover there? Gianni is going to come out of his grave if they desecrate his gorgeous oceanfront mansion. Adriana arrives in a black dress that leaves little to the imagination. She has her girls on display, and her face is glowing with perspiration again. Adriana tells Marysol how she saw Kanye’s “documentation,” and Marysol thinks that Adriana is a crazy mother*cker. #nutjob

Larsa finally arrives not-so-fashionably late. She sees her nemesis, Adriana, when she struts in. Larsa dresses like less is more, which is not always the most flattering for her. She has body parts falling out when you least expect it. Alexia cannot understand how to mediate these two women arguing over Kanye’s penis size. Larsa is used to being respected when she does not want to discuss something. Adriana thinks that Larsa is the queen bee and sees them as beneath her. She cannot believe how prudish Larsa claims to be.

Guerdy proclaims that Larsa, “Has a lack of respect for others since she was hours late.” Larsa concludes that Adriana sees herself as the victim. Adriana cannot believe Larsa is so self-righteous while dating a man who is her son’s age. Phew, these two have managed to ruin two events with their unruly behavior. Do you all think that Adriana is pissed that Larsa has returned as a housewife and she was demoted? Let me know in the comments.

Next week, Adriana slams Larsa by telling her she will never be Kim K. no matter how large her ass becomes. Julia tells the group the only person she cannot connect with is Larsa. Happy Friday, Blurbers, and have a good weekend!