RHOM Reunion Recap 2: Larsa Calls Adriana a Liar Over Kanye Story, Alexia Shares Details on Her Relationship with Herman, Plus Lisa Opens Up About Lenny’s Affair 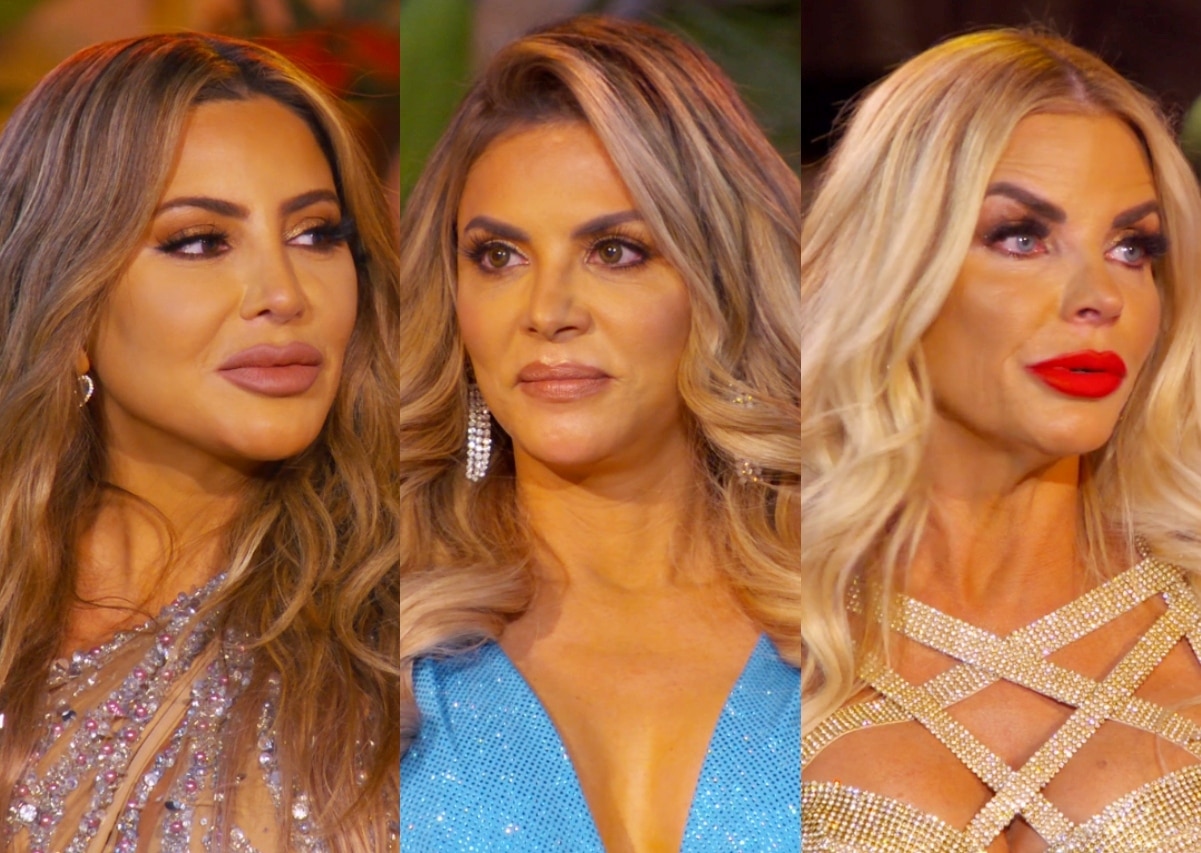 We are back for round two of our Real Housewives of Miami reunion! We will be getting clarity on a few hot topics from this season, which includes Kanye’s d*ck, so let’s try to uncover the truth, shall we?

Andy wants to talk to Nicole about her engagement. No one knew that she got engaged, and she did not share the news with her fellow fembot Lisa either. Nicole did not think to tell anyone — except People Magazine. Nicole followed the media’s rules allowing them to have the exclusive on her engagement. Marysol shades her, saying it was just People Magazine online. The other ladies question if she is really connected to the other women. Julia and Martina spent Thanksgiving with Nicole and her family. Nicole also invited everyone — including Marysol — to fly to the reunion on her plane even though she trusts her the least.

Andy then questions Nicole on the status of her relationship with her Lothario father. Nicole did see her dad on Thanksgiving BUT only for him to bring over a raw turkey for her to cook so he could bring it to his girlfriend’s house. Now that is really a messed-up relationship, and she has not told him about her engagement either.

When the Hamptons trip is brought up, Adriana gets called out for trying to take the best room. She pretends that she did not want to upset Martina by sharing a room with beds that were too close to each other. Andy wants to know how far their friends-engagement relationship has gotten. They deny that they have done anything sexual and have not even kissed. Julia gets called out about her hangover. She took a shot of olive oil to coat her stomach, and she is adamant that she did not get sick from drinking. Andy wants her to embrace her drunkenness like he did on NYE. Side note: Marysol is embracing her drinking since she takes more pee breaks than anyone else and blames her “peanut bladder for it.”

Lisa is now revealed to NOT have a Barbie and Ken dream home marriage. She admits they have had struggles that were painful for her. Lisa acknowledges that Lenny works very hard and can come across as being not emotionally supportive to her. Lenny was able to emotionally support someone else, though — just saying.

Lisa attributes their problems to her not taking it seriously about having kids. She was far more interested in clubbing with her friends and documenting it on her Instagram account. Lenny eventually did threaten her with divorce if she didn’t prioritize her family. He also told her that he was no longer in love with her eight years ago, which destroyed her. Lisa went through a lot trying to have children through IVF. She felt extreme guilt since she could not give Lenny the family he desired.

Lisa asks the other ladies for their thoughts on a successful marriage. Adriana tells her that we are wired genetically to last two years and then after that to protect our offspring. Guerdy shares that it requires work and a strong commitment to your family. Lisa has felt abandoned all her life, and when Lenny threatened to leave her, it was devasting to her psyche.

Lisa and Lenny were separated for a month or so. Lea Black was there for her in every way, and she supported her if she stayed or wanted to divorce Lenny. Lisa blames Lenny’s emotional affair on her bad behavior. She insists that Lenny did not have sex with this person. Lenny gets called out for being checked out by the other ladies. Larsa thinks that Lenny is just selfish, and she should be able to recognize those traits. Lisa then decides to be her true self and complains she has not been getting the same lighting since she is relegated to the cheap seats at the end of the sofa. She will never change!

Larsa’s bloopers with all her mispronunciations are highlighted.  She still won’t give it up on who MJ was. Guerdy is convinced that it was Michael B. Jordan since he is a handsome actor with those initials. They then delve into what Andy wants to know about the pearls surgically being put under a man’s shaft. Andy will also never change either…

Alexia’s tumultuous season is rehashed and is reminiscent of a telenovela. The fact that she lost her beloved mom on her wedding day was horrific. They did marry in St. Barts and will be planning a bigger celebration in Miami. Andy then questions Alexia on if she knew that Herman was gay. Alexia is adamant that there were no signs, but she had heard rumors prior to their marriage. She did talk to him about it, but he convinced her that they were untrue.

Herman said if he had wanted to experiment, he could have done that after he divorced his first wife. Alexia recalls an incident when she saw something she did not like with another couple that they went out with all the time. She confronted both men in her backyard and was assured nothing was going on.

Alexia even had this conversation with her mom, who assured her that Herman was such a good man and if her sex life was normal then everything is fine. Herman was super possessive and jealous with her. Alexia never did snoop through his things like Lisa did. Once Herman passed away, the lawyers contacted her and told her that there was a home purchased for the “hot guy.” Alexia and Herman had a prenup, and she tries to assure us that she was not his beard. She also makes it clear that she was not a gold digger. I don’t know, but those Miami streets have been talking about their relationship for a long time…

Lea Black has come out publicly blasting Alexia over outing Herman. Adriana gets called out about being the one who told everyone that Herman died during sex. Alexia is not troubled by that if it occurred since she is glad that he got to live his true life.

The situation with Todd and Peter is brought up, and Alexia admires Todd’s honesty. Alexia recognizes that he is saying these things out of concern and love. She knows he loves Frankie and even Peter when he is not being a punk and getting arrested. Marysol saw the pain that Alexia was in over the discord between Todd and Peter, but she thinks they came out stronger.

Andy asks, “Will Frankie be able to live on his own?” Alexia does not think so and would never be at peace if he was not by her side. She is then questioned about Peter getting Frankie stoned, and she insists that Frankie fainting was not from smoking — it was a seizure from his accident. Alexia shares that they have increased his medication to ensure this does not happen again. She claims that she was not upset with Peter, but Frankie does not partake in that behavior anymore. Why is Peter still partaking in that behavior, though?

Alexia was not troubled by Todd saying he was not their father especially Peter. Andy also brings up Peter’s domestic violence arrest, and she says it has not caused any stress on their marriage. Todd’s premonition that Peter would be arrested came true. Alexia says the people’s court says he is guilty. She denies that she enables Peter, and frankly, no one seems to buy that.

Mama Elsa, who passed away three years ago, is brought up. She would want to liven up a party and call some handsome men. She would hilariously call 911 and pretend that she was sick while hanging onto her wine glass. Mama Elsa was a character!

Adriana’s story about seeing Kanye’s d*ck is next. Larsa is already calling her a liar. She mouths “I am dead” when Adriana sticks to her story that she saw it at an event in Miami called Art Basel. Adriana acts like she innocently walked into his bathroom. She could not look away from his “big and thick one.” Larsa cannot believe this happened since he has security with him — even in the bathroom. She finds it to be inappropriate that Adriana has crossed boundaries talking about her doppelganger’s husband. Adriana then produces a photo with him at the event with the bathroom clearly in view. Larsa thinks that Adriana is a fan of hers and the Kardashians and is lying about everything. Kanye said it was all lies and that he has never met Adriana.

Adriana is hurt that she was called mental and bipolar. She makes the point about Julia not being able to connect with her either when she shamed their lack of Instagram followers. Adriana/Julia both feel like Larsa is condescending and arrogant.

Nicole wants to know if there is an NDA, and she is trying to figure out why everything about Kim K. is so confidential. Larsa then fires back with wanting to know about her ex who was a teacher. It seems like Larsa and Kim’s relationship is on shaky ground and she does not want to upset her.

Adriana and Larsa both wore the same dress this season — Larsa in her opening segment and Adriana while lounging on her new car. Adriana thinks she wore it best. She thought Larsa looked like the cookie monster and she brought her some cookies in her Tiffany box. Andy calls it the best prop at a reunion. Adriana at times looked like Oscar the Grouch, so she might want to step off her high horse a bit.

Adriana then apologizes to Larsa and will stop talking about the Kardashians. They end the season with vodka shots with pickle chasers — only in Miami. We get a final announcement that Peter’s charges were dropped by the Miami Police Department.