Home Recaps RHOSLC Reunion Recap 3: Jen Calls Lisa a B**ch as Sharrieff Explains Where He Was During Arrest, Plus Will Lisa and Meredith Make Amends?

RHOSLC Reunion Recap 3: Jen Calls Lisa a B**ch as Sharrieff Explains Where He Was During Arrest, Plus Will Lisa and Meredith Make Amends? 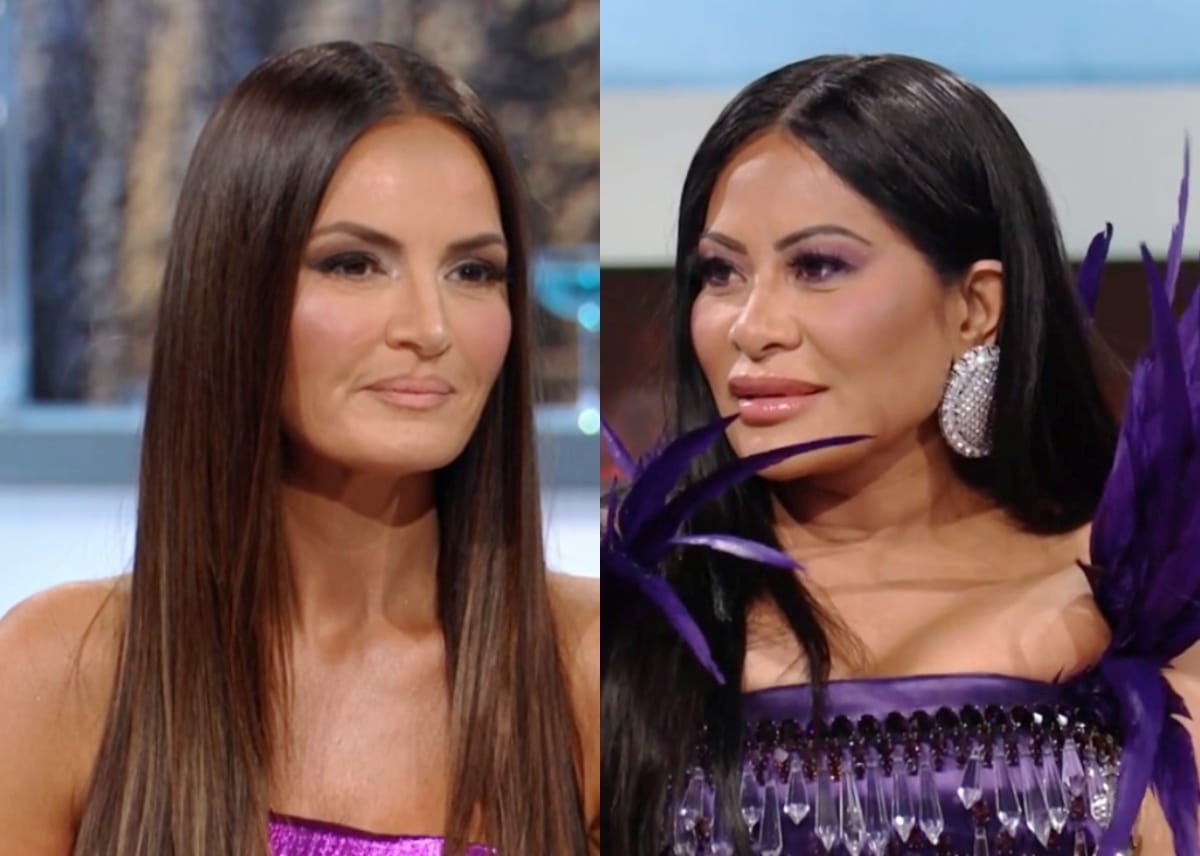 It’s the finale of The Real Housewives Of Salt Lake City reunion, and Andy is FINALLY getting to the juicy stuff… ya know, the part where Lisa accuses Meredith of sleeping with “all of New York” and the part where we learn more about Jen‘s arrest. In the end, who still stand by Jen’s side throughout the trial, and will Lisa and Meredith ever get back to where they were?

It’s time for a “real break,” and Meredith does her best to avoid Lisa, who very clearly wants to apologize off-camera. Lisa claims she is “beyond sorry” for the things she said about Meredith, but she was upset that Meredith was talking sh*t about her home renovations. Makes sense…??

In the meantime, the guys are toasting, awaiting their reunion debut; however, Seth could not be there in person. If only the women got along as well as the guys do…

Andy comes right out and asks John why he would mess up Angie’s catering (half-joking, I presume), and Andy calls it an “interesting ride” watching Duy and his sister-wife season. Justin gets asked just HOW much money Whitney took from their savings for the rebranding of her company, and a very rehearsed Justin responds that “Whitney is the best investment” he ever made. He states that Whitney’s business is thriving, and Whitney believes that she IS Justin’s retirement.

The topic of Whitney’s cleavage and Seth’s admiration of said cleavage comes up. Whitney laughs it off and we get to be grossed out again rewatching the scene of Seth tongue-ing the boob cake. Lisa’s rant about Meredith having sex with half of New York surfaces. Seth becomes emotional talking about the passing of Meredith’s father. He commends Meredith for getting through it, and he claims he “tried to make an a*s out of” himself to distract from the heaviness. “Did she [Lisa] mention the part that I had sex with the other half?” Touché, Seth… touché.

Andy addresses Duy next. He brings up the trauma of losing their stillborn daughter, and Duy explains family planning. Andy brings up the disconnect between what Duy is saying and what the viewers are saying. His behavior is questionable, but Duy explains that he never asked Jennie to get pregnant again. I can hardly believe this sister-wife conversation is real, and Duy states that sometimes it’s better to just think logically to get results. Huh? Duy backpedals and reminds us that he didn’t think of Jennie’s feelings and that he has since sought out help. Coach Sharrieff steps in and reminds viewers that therapy is good, especially in the African American community.  The stigma needs to be lifted, and Duy reiterates Coach’s message.

We learn about what happened the minute Jen was arrested from Coach. He explains he received a phone call from Homeland Security while in the hospital and learned his home was surrounded by officers with guns drawn. Jen explains that the call she got from Sharrieff in the Beauty Lab parking lot was real and we learn that Coach experiences rectal bleeding, so Jen was concerned about his health and did not get tipped off, as many people speculate.

When asked about how the other women spoke about Jen post arrest, Coach calls it “unbelievably painful.” Jen explains she did not expect the extent to which the sh*t talking blew up, and Andy asks if Sharrieff ever questioned where Jen got all of her money from. Coach answers confidently that Jen has worked her butt off and will stand by his wife. Coach claims to understand what Jen does for a living and Jen repeats that she is innocent until proven guilty.

Jen does not appreciate what Whitney publicly speculated about Jen’s charges, and in response to that, Andy brings up Justin’s pyramid scheme lawsuit. Justin claims that the suit “lives out there.” Jen adds in that she does not appreciate why Jen, the brown girl with the Black husband, gets questioned why she should have oodles of money. Andy clarifies that the viewers simply don’t understand what Coach and Jen do for a living.

John jumps in and reacts to the phone call Lisa received from Jen. John calls the women “two firecrackers,” but Coach admits that he was shocked Lisa ignored Jen during her hardest time. Jen is facing 50 years, but Coach explains they have no choice but to keep moving forward despite the cloud that lingers over their family.

Another move off-camera made by Lisa. Shocking. Apparently, there was a huge make-up between Lisa, Whitney, and Heather, and Lisa explains that she did that because she feels like the ladies need to “work on things and get to know each other.”

Meredith claims she does not hold grudges, but rather, she “establishes boundaries,” especially when it comes to Jen.  She was not wishing Jen any ill will and that opens the door to the dramatics that occurred in the Beauty Lab parking lot. Andy asks Jen to take him back, and we learn that Jen was only on the road for about 20 minutes before she got arrested. Jen explains that there was an indictment, and she was shocked to hear the charges: fraud and money laundering. The ring footage gets brought up, and Jen explains that she wanted the viewers to see the trauma that her family went through despite their social status.

Jen has not talked to Stuart since the arrest, and despite the fact that she has referred to him as “more than a business partner,” Jen stands by her statement that they do not work together. Stuart has since changed his plea to guilty, but Jen cannot comment on that due to the case.

Jen’s lifestyle continues to get questioned, and Lisa is put on blast for wondering where her money came from.  Whitney makes it clear that she never questioned Jen’s success but her spending habits. Whitney gets asked why she knew so much about fraud and money laundering, and she gets called a flip-flopper in support of Jen. Jen does not appreciate Whitney claiming she had a sugar daddy and becomes emotional talking about how the women are weaponizing their friendship with her.

Lisa gets called out for distancing herself from Jen after the arrest, and we review the fact that Lisa calls all six of her lawyers to apparently find out more information about the arrest on the “docket.” Jen calls Lisa a b*tch over and over, and Lisa tries to remain in control despite Jen’s attempt to “turn the narrative.”

Andy wants to know more about the Uber story that Lisa hinted at. Lisa states that she was not insinuating Jen was having an affair. Meredith corroborates the rumor about Jen being flagged at Louis Vuitton and explains why she hired the “cyber specialist” to investigate the “menacing messages.” According to Meredith, the investigator believed it could be Jen, but Jen finds this baffling and denies, denies, denies. Meredith states that she tucked this info away since it was not conclusive.

Jen brings up that she received racist texts and wonders if she should assume someone on the couches sent them, according to Meredith’s reasoning. All the women believe Jen is innocent, and Heather a*s kisses big time, saying she will be in court every day. Jen states that she is fighting this because she is innocent, and she wants to represent all of those out there who can’t fight.

Jen claims she does not know what her charges are (what?!), and she thanks the people who have supported her. She also hopes people will stop judging but promises to be on the couch with Andy at the end of season three.

Heather shares that her biggest takeaway is that the group is all human and that she is rooting for Jen all the way. Jennie wants to speak her mind more (girlllllll, you spoke quite a lot on those Facebook posts, amiright?), and Whitney believes it is important to take a stand even if it’s not the most popular position.

Meredith learns to state her feelings instead of having them fester, and Lisa wishes people could see her for who she is (as she feigns crying). Jen lets the world know that we are all stronger than we think we are, and she is grateful for a supportive family. Andy thanks the women for the season and they wrap with a toast made by Heather and some churros supplied by Andy (not thrown directly in the fire this time). That’s a wrap!

TELL US – WHAT DID YOU THINK OF THE FINAL PART OF THE REUNION?