RHONJ Recap – Teresa Throws Drinks at Margaret, Calls Her White Trash and Threatens to Beat Her Up Over Luis Rumors 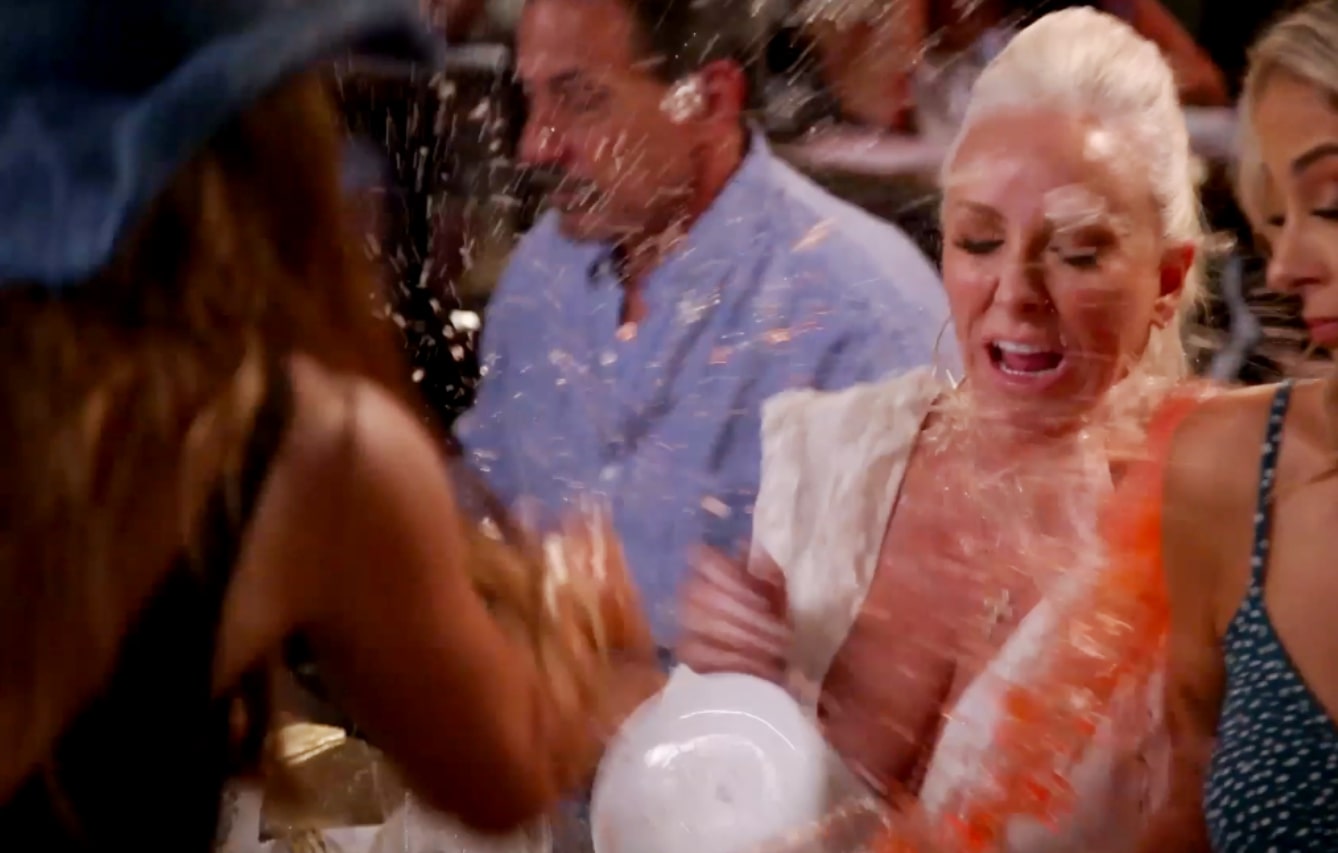 The Real Housewives of New Jersey are headed to Nashville this week! We have a raging bull vs. raging fool movie where Teresa reverts back to her table-flipping self and tosses food and drinks on Margaret. Let us watch how Tre continues to get away with unruly behavior, shall we?

The Giudices are moving out of their monstrosity of a home today. Teresa is running around screeching at her poor kids. Why do the buyers want Teresa’s bed? Maybe they are keeping some of her furniture to exorcise some of the gaudy demons out of that house? Gia is sad that they will be leaving this home that is full of memories of their beloved grandparents. Teresa thinks her kids will go off her energy and somehow be happy since she is happy. None of the girls seems to be going off Teresa’s vibe while Teresa is running around consumed with being in her love bubble. They decide to have one final group hug, and they leave for the last time. They close those atrocious front doors for good and head off to live through another trainwreck of a relationship.

Frank is moving back in with Dolores and the kids, and he has brought his ugly green suit. He is confident that a double-breasted suit will be in style again. Frankie Jr. is laughing hysterically with an adorable giggle at his dad’s bad style. Gabby has smartly placed a chinchilla in her dad’s room that will keep him company — since it squeaks like his girlfriends. Frank mentions that he will find a use for it — penis warmer.

Dolores shares that Traci has hooked them all up with a house in Nashville for their trip. This RHONJ crew is staying in the same house??? Dolores is concerned about how Teresa and Marge will coexist but knows she cannot stop the crazy train into Nashville that production has set up. She thinks since Teresa is moving in with Louie that she is much happier than she was when she threw a temper tantrum in the forest.

Melissa prompted by production calls Teresa while she is driving and pretends to care about her move. Teresa shares how Marge is getting under her skin because she has been gossiping. She pulls up into her new home with Louie. The house is ostentatious and over the top. Louie’s son will be living with them too. Gia, in her ITM, expresses how she is happy with their new home and is happy her mom is in love. Louie takes everyone outside so he can show everyone his surprise for Teresa. He has a stone that says “Sempre Insieme,” which means always together. Louie has done his homework on Teresa, and he nailed how to ingratiate himself with her and the girls.

Jackie and Evan chat about how ugly the situation has been with Marge and Teresa. She finds herself to be in a weird position because Margaret’s her best friend. Jackie does not want to abandon her friend, but when it comes to Teresa, she must be more cautious. She admits that when she gets stressed that she reverts to her bad eating habits. Jackie was so stressed when the Evan rumors came out that she lost weight since she could not eat.

Melissa is telling Joe that she cannot stand how Teresa does not have a good relationship with her friends and puts her in a bad spot. She really means to say that she wants Teresa to leave the show since it rains on her parade, and she wants to be Queen Missy G. of Jersey.

While en route to Nashville, Melissa does not know what state they are in, and I thought she had a college education? The group arrives at the rented house in Nashville, and it looks beautiful. Teresa arrives and thinks she of course should get the master bedroom. The entitlement is real with this arrogant dolt. Dolores ends up giving the lovebirds the master bedroom. Melissa is annoyed with Dolores’ logic and rewarding Teresa’s demands.

Marge does greet Teresa when she sees her, but you know this is not going to end up well for them. Teresa makes it perfectly clear that she cannot stand the sight of Marge. Marge ends up knowing the realtor that hooked them up with the house. They all decide that they want to go bull riding, but knowing what I know now wouldn’t they have been better off just slapping a saddle on Teresa and taking turns trying to calm that raging bull?

Teresa confronts Jackie about not being talkative at the baseball game. She believes that Marge is feeding this blogger intel on everything that happens with her and Louie. Jackie tries to reason with Teresa to no avail and thinks she is full of conspiracy theories. Darling Jackie, she has no idea what that even means. Teresa thinks it is a “coinkadink” but of course butchers the word.  She must forget that she puts her life story all over her social media and that bitter exes will come out of the woodwork when they see this arrogant tool on television love bombing another victim.

Evan tries to get some action when he tells Jackie that he got her luggage. He wants sex but she does not want to ruin her hair since she has learned from past seasons that bedhead is not a good look for her. Jackie might want to start putting out or Evan might be heading off to the gym again…

Jackie runs and tells Margaret that Teresa is all wound up and accusing her of feeding the gossip blogs with “rumors” about Louie. Marge claims to not have time to run to these bloggers and feed them intel. The group decides to partake in some moonshine, which is awesome in Tennessee if you have not partaken in it. I would not mix moonshine and “supplements,” though, if I was the Jersey guys.

They head into Nashville for dinner and bull riding. Melissa tries to ride the bull but is tossed aside like a rag doll. Jackie tries to hang on like she does to Evan, but the operator is harder on the girls than the guys. Dolores will not go on it since she will not ruin the body that she had custom-built for herself. Teresa awkwardly tries to ride the bull, but her bodysuit looks like it got sucked up her hoo-ha and she was having some crotch pain. Side note: I must admit I did enjoy watching her get tossed around and off!

Bill is even game when it is the guys’ turn, and he gives it a valiant try. Louie was so greased up he just slid off the bull. Tiki easily beats Joe G., who thinks because he has big balls that he would win the bull riding competition. Darling little Joey, there is nothing big about you — except your ego. Jennifer, in her ITM, mistakenly says that she would like to ride Tiki in a bull riding competition. She regrets saying that and changes it to she likes watching him ride. Melissa, in her ITM, is cracking up that Joe got excited to be able to ride something for 12 seconds.

Melissa tells the group that she wants to go to a recording studio since she wants to be on display again. The rest of the group does not seem too interested in that proposition. It is brought up how Marge knowing the realtor shows how she knows a lot of people. Teresa jumps on that comment and accuses Marge of talking to people in Louie’s past and feeding it to a blogger. Marge denies that she would do something so calculating. Production backs up Marge by showing clips of Marge protecting Teresa in the past. Marge finds Teresa is spinning this horrible story that Marge is out to hurt her. She then pushes Teresa’s crazy button and calls her a disgusting liar. Teresa then appears to have roid rage and slings all the drinks and food across the table at Marge. She then runs away from the table, calling Marge white trash and Erika Jayne’s beloved word, c*nt. IMO, the only person behaving like white trash in this scene is Teresa.

Louie, Melissa, and Joe try to get Teresa out of the room so she can stop embarrassing everyone at the table. They head downstairs to escape the mayhem, and then Teresa gets all fired up again and tries to go back to the table and get Marge to fight her.

Dolores tells the rest of the group that she must follow Teresa and leave since they came together. Marge reminds Dolores that they talk five times a day and are like best friends. She is pissed that Dolores is rushing to be at Teresa’s side when she was the one who had food and drinks tossed at her. Frank then reminds Dolores that they are the hosts and she needs to stay put, which she surprisingly listens to. Side note: I wonder if Dolores is not in Teresa’s wedding over this incident?

Teresa continues her rant in the van, and Jennifer and Bill decide to leave with them. Louie is surprisingly calm and looks at Teresa like she just got released from her cage at the zoo. I wonder if Louie still likes the sound of her voice! Louie tries to tell Teresa how she should not have behaved that way in the restaurant and should have communicated her feelings instead of acting like a total trash bag herself. Melissa and Joe must go back with them since they know they will suffer the same wrath as Marge if they are not loyal soldiers to the raging Jersey Queen. Teresa slaps on her pajamas and wants Louie to go with her to a hotel since she will not spend the night there with Marge.

Well, that episode was off the chain and Louie got a good look at what he is marrying. It is ironic that he came off better this episode than his paramour. See you all next week for the finale episode where Marge is expecting an apology from Teresa! I hope everyone has a great holiday weekend!