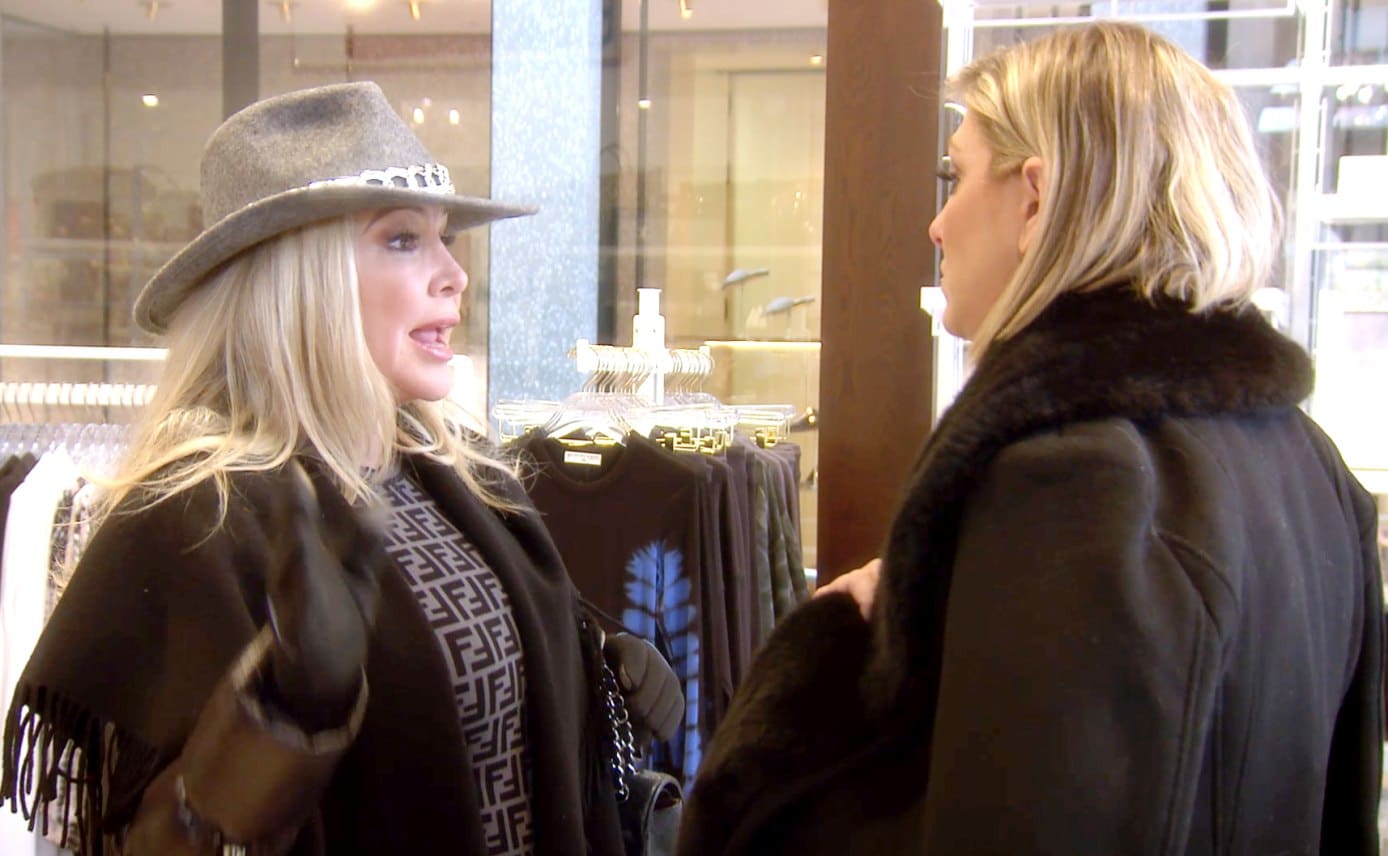 The Aspen trip is wrapping up on the finale episode of the Real Housewives of Orange County, but there are relationships that need mending before they can head back home…

After a night of ugly fighting and drunk antics, Emily calls Gina out for acting “like a psycho.” Gina claims that the haunted mine they visited the day before gave her this bad juju and blames the demons for her behavior. To try and fix the situation, Gina and Emily plan on stopping by the mines to drop off a gift to the “Tommy Knockers,” aka the ghosts who haunt the mines… according to legends.

In the meantime, Noella talks to her mom and discusses Heather’s “mean girl bullsh*t.” Noella doesn’t need any more drama in her life, so she visits with the wellness coach looking for some direction. Noella tries to get grounded and is grateful for this trip since she was able to let go of a lot of heavy emotions here. She claims she is on the path to healing…

Taking Gina and Emily seriously during this offering is very hard to do… especially cuz they left fancy champagne, Diet Cokes, and chocolate. These are some bougie spirits. After the “healing,” they head out to go shopping. Emily lets Gina know that she must work things out with Shannon, but Gina is really irritated by her. She doesn’t appreciate how Shannon just likes to take credit for friendships and takes Noella’s side after knowing her for, like, five minutes.

Jen, her see-through shirt, and Heather join Emily and Gina shopping. Before Shannon arrives, Gina discusses her annoyance with Shannon. When Shannon enters, Gina lets her know right off the bat that she needs to have a conversation with her about last night’s events. Gina explains that because she is not directly addressing her issues with Shannon, her anger is off the charts. Shannon doubles down and lets Gina know that there is a line between confidence and arrogance. Shannon reminds Gina that she once asked Shannon if she even had any friends, and she is tired of doing numerous nice things for Gina and getting nothing in return.

Shannon tells Gina that the overall theme is that Gina never made an effort with her, and Gina claims that Shannon just doesn’t pick up the phone when she does reach out. Shannon is tired of being Gina’s punching bag and is unsure if Gina even wants to get along with her.

Emily steps in to try and play mediator and lets Shannon know that Gina appears upset because Shannon sticks up for Noella. Shannon explains that being with Noella takes her back to her own past marital issues and that she never meant to fight with Gina over anything. The fight ends with Gina and Shannon hugging in the store after the rest of the group spent thousands of dollars on jackets and who knows what. Gina is hopeful that this friendship can start fresh.

Back at the house, Noella asks Shannon if she will be there with her as she takes off her wedding rings. She calls Shannon a great friend and listens to her advice about a positive and new beginning. Noella can’t seem to get the ring off her finger (convenient that it NEVER happened before, huh?), but she is grateful to have Shannon with her during this moment.

The last night in Aspen is all about “rebuilding and creating cohesion,” so the dinner tonight better go well. But alas, things don’t always go as planned and luck would have it that Noella winds up right across from her bestie, Heather. LOL. Noella wastes no time telling the sommelier about her divorce, which is hilarious. Did she blow him a kiss as he walked away?

Shannon extends an invitation to the ladies to her rock and roll party that she is hosting when they get back to the OC and everyone is amped. Going with the excitement, Emily (yet again) suggests that they play a game at the dinner table. What is with all of these games, Emily? Now it’s “tell us something about yourself that no one knows,” and Shannon lets the group know that Noella took off her wedding rings today. With the spotlight on her, the compliments start flowing from Noella and she tells Heather that it is #goals to be a part of her friend group.  Noella understands that to make the night fun, she must kiss Heather’s a*s, so that is what she will do.  Shots were had and so was fun, which is a nice change of pace for this group.

The ladies are home after their Colorado trip, and Emily is prepping for her big not-vow-renewal-just-wedding-photo-event. Emily likes to call it a celebration of marriage and love, and of course, Gina is right there with her. Gina states that it is clear Emily and Shane did the work and deserve to have this moment for their memories.

Shane is as awkward as ever, but he pulls out a jewelry box with an engagement ring. Emily’s been engagement ring-less for 13 years since he never technically gave her an engagement ring because their wedding was so rushed. Shane proceeds to give her rings like candy, one for each big milestone year he has missed. In the end, Emily’s hand is weighed down by diamonds and the pictures came out beautifully.

It’s the day of Shannon’s rock and roll party and things are certainly rolling. The ladies are taking the rock glam VERY seriously — I mean Noell Hendrix, Emilectra, Gwina Stefani, Fancy Spice, Thunder Storms, Doctor Baywatch? These women really got into character… I will give them that much.

At her mansion, Heather explains to Terry that Shannon had this genius idea that the ladies were gonna form a band and sing a song at this party. Luckily, with Heather’s connections to Richard Marx, she was able to get a song written. The women went as far as laying down the tracks in the studio, and fortunately for us viewers, they are going to perform the song live tonight at the party.

Shannon showcases some “friends” at her party, and Emily ponders if these ladies are just paid actors. Ouch. Turns out this is a sit-down dinner party, which only adds to the hilarity. I mean, Shannon made RIBS for these ladies to eat, and they can hardly breathe in these corsets that they are tied up in. To make matters worse, Jen decides that she needs to share a message with the group despite Ryne’s total resistance. Jen thanks them for their help as she struggled with their marriage, and you can see Ryne grimace. To follow, Shannon states that she is blessed and believes that this is the best new chapter of her life.

It turns out that John and Shannon are planning on buying a boat together, but her relationship with Gina is still on rocky waters. Noella states that this is a year of rebirth and regrowth and plans on loving on herself. But that didn’t last long since she is now dating a younger man. Jen’s house is on the market, and after separating from Ryne for over a month, they have decided to start fresh somewhere else. Emily is still helping with the California Innocence Project, but she is still guilty of stirring the pot. Gina is looking to buy a new house with Travis and their Brady Bunch, plus she has to fit her “inflated ego.” Heather and Terry are celebrating 25 years of marriage and are looking for ANY reason to throw a party.

The OC Realz take the stage after Heather tells the group she is proud of her circle of friends, and so begins the cringiest season finale scene. They dance around and lip-sync the lyrics of this hot hit, and for the most part, they are taking it way too seriously. But, I hate to admit it…the song’s been stuck in my head ever since…

TELL US – THOUGHTS ON THE SEASON FINALE OF RHOC?