Home Recaps RHOC Reunion Part 1: Shannon Accuses Gina of Gunning for Her and Noella’s Divorce is Questioned, Plus Emily Inserts Herself in Every Discussion

RHOC Reunion Part 1: Shannon Accuses Gina of Gunning for Her and Noella’s Divorce is Questioned, Plus Emily Inserts Herself in Every Discussion 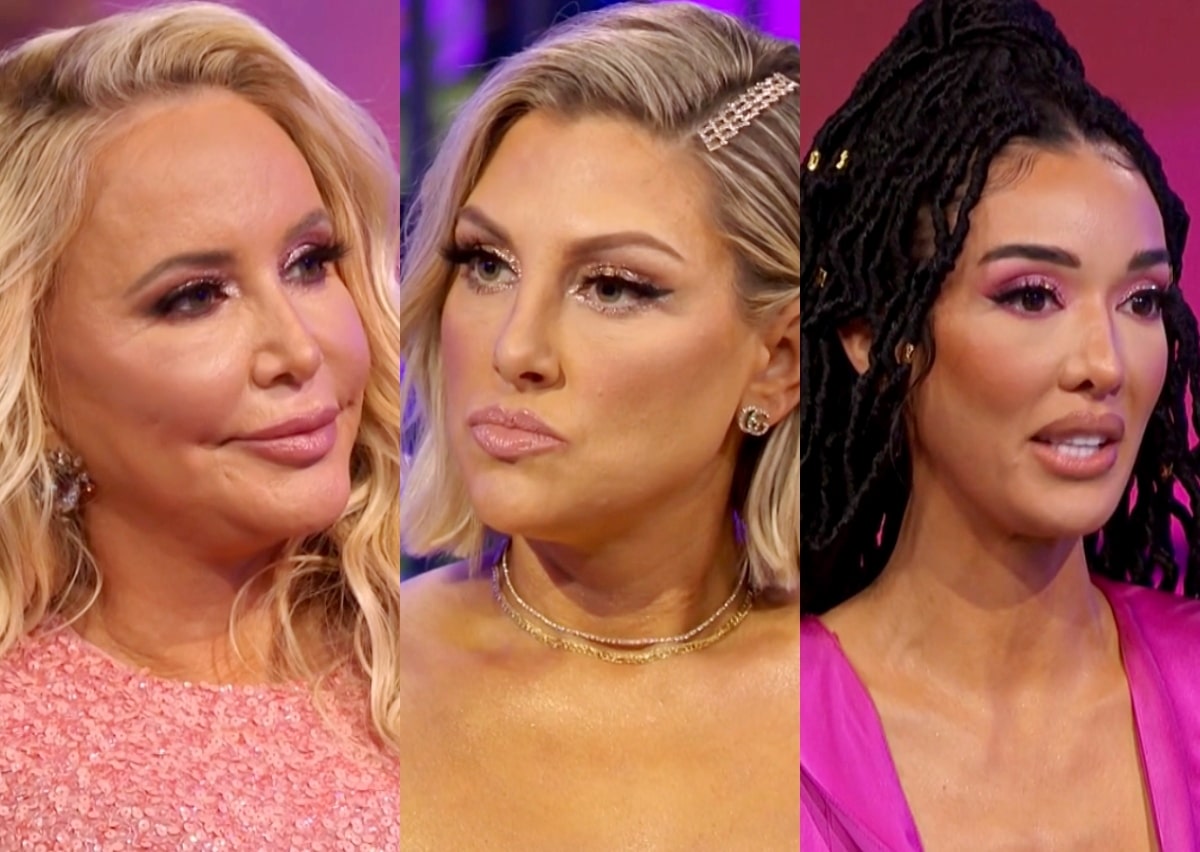 It is hard to believe this is the season 16 (!!!) reunion for the Real Housewives of Orange County. Noella states that she is excited to be “popping” her “reunion cherry,” but part one seems a little slow-moving. Just wait till the drama really starts heating up!

Andy greets the ladies starting with Heather first. It has been five seasons since Heather was last on the show, and boy have her kids grown, even though Heather hasn’t aged a day. Gina gets Andy’s seal of approval for her look… and her hair… and Andy congratulates Emily for celebrating her 13th wedding anniversary with Shane. Shannon claims she did not have a microdose before sitting down on set, and Andy asks Jen where she is moving. Jen states that “time will tell” if Ryne will join her in the new house — awkward. Noella claims she is “overwhelmed and underprepared” for this reunion, but that hasn’t stopped her before.

Andy kicks off the reunion with a review of Heather this season. Heather gets emotional and discusses her daughters’ coming out stories. Noella, as a bisexual, loved seeing Heather’s motherly side. Regarding her marriage, Heather explains that she has worked hard with Terry and has avoided the “reality show curse.” Welp, now she put it out there — did she jinx herself?!

Noella calls her watch back “brutal” as she listens to her past-self call her ex-husband the sweetest man. My, have the times changed! Noella shares that she met James online at Seeking Arrangements — wait, isn’t that for sugar daddies?? Noella explains that she didn’t care about money (which is laughable), but it also makes ya wonder what HE was doing on that website while STILL married.

Andy asks why James filed for divorce, and Noella shares that despite what others may think, James was thrilled that she joined the show. Noella claims that she would never have done the show if she knew her ex didn’t want her to because, after all, she loves her plane… er, and her husband. LOL. Emily believes that James was on board and excited for the show until his tax stuff came out, and she stretches what she *thinks* Noella was thinking.

Shannon swoops in and tries to defend Noella, but she stands ZERO chance with Emily’s incessant chatter. Emily continues to jump down Noella’s throat and tries to make her look stupid by establishing Noella is a resident of Puerto Rico, which would explain why James filed for divorce there. Noella shares that she is officially divorced, and we learn about the new, 33-year-old man in her life who bought her a COMPANY! Of course, it’s an adult toy company and it was a Christmas present after only a few weeks of dating.

I don’t know what’s worse: talking about Noella’s stack of vaginas or rehashing this fight between Shannon and Heather… again… Andy asks the most important question to kick things off: Who ate all the leftover sushi from Heather’s party? He then asks Shannon why she would bring up the 20-year-old lawsuit that was dropped regarding Nicole and Terry Dubrow.

Shannon denies that she plants stuff so it can come out on camera, and Emily comes in hot and interrupts Shannon left and right. Heather wants to break it down for Shannon and wonders why, given all of the opportunities Shannon had, she never brought up the lawsuit to Heather privately. Heather tells Shannon that she “broke the code” by talking about family and business, and she further states she felt betrayed by Shannon but not by Emily and Gina.

Shannon butts in and reminds Heather that like Gina and Emily, she, too, apologized to Heather, but Heather wanted no part in it. Heather states that she was madder at Shannon because she protected her eight years ago even though she could have blown up her life. Heather knew about David’s infidelity but did not discuss it on the show. However, Shannon took a rumor about HER family and ran with it as a storyline. Heather is questioned about why she threatened Shannon like a mob boss, and even Heather chuckles remembering that scene. She apologizes to Shannon, but she makes it clear that when it comes to her family, that is an untouchable topic.

Now that it’s Emily’s segment, let’s hope that all the women just start speaking out of turn and cutting her off, just like she has been doing to them. She cringes rewatching her drunken antics but stands by being the “truth-teller” this season. Emily claims she did it with no malintent, but her delivery was always a bit abrupt.

Regarding her daughter being baptized as Mormon, Emily is hopeful that the mix of religion and her perspective will make her daughter a well-rounded individual. She shares that she has some fundraisers coming up for the Innocence Project. She also confirms that although it’s not a huge step, she has been having a little bit more of a relationship with her dad. Emily’s “cool” dad actually watches the show, and she hopes that she can have a real conversation with him about their past one day.

This season Gina was “thriving, driving, and all glowed up.” Those were Andy’s words. After getting a spiritual extraction, things have been looking up for Gina. She tells Andy that things keep getting better with her ex-husband Matt and that, despite the past issues they have dealt with, they are able to be parents to their children, which is the number one priority. On the flip side, Shannon tells Andy that she has zero relationship with her ex.

Gina is unsure when Travis will propose, but she states that between the six kids and the financial issues after both of their divorces, they need to rebuild before tying the knot. Regarding her friendship with Heather, Gina just claims it’s the New Yorker vibe she gets from Heather.

The reunion gets a little cuteness added in when Andy’s son Ben says hello to the ladies via FaceTime. But that sweet moment doesn’t last long… Andy dives into the friendship of Gina and Heather and how it apparently makes Shannon “jealous.”

Shannon shares that Gina’s parents are super sweet and she appreciated the thank you that she got from them for helping Gina legally navigate her DUI. Emily again tries to jump in and dominate the conversation, but Shannon steers it back. She states that friendship should be a two-way street, but Gina seemed to be gunning for her all season. When Gina attempts to voice her side of the situation and Emily chimes in, Shannon straight loses it. She shrieks, “You always cut me off and I’ll probably lose my voice” because of it. Gina reminds Shannon that she’s gonna lose her voice because she did too many things this season to defend, and those sound like fighting words to me…

TELL US – THOUGHTS ON PART 1 OF THE RHOC REUNION?