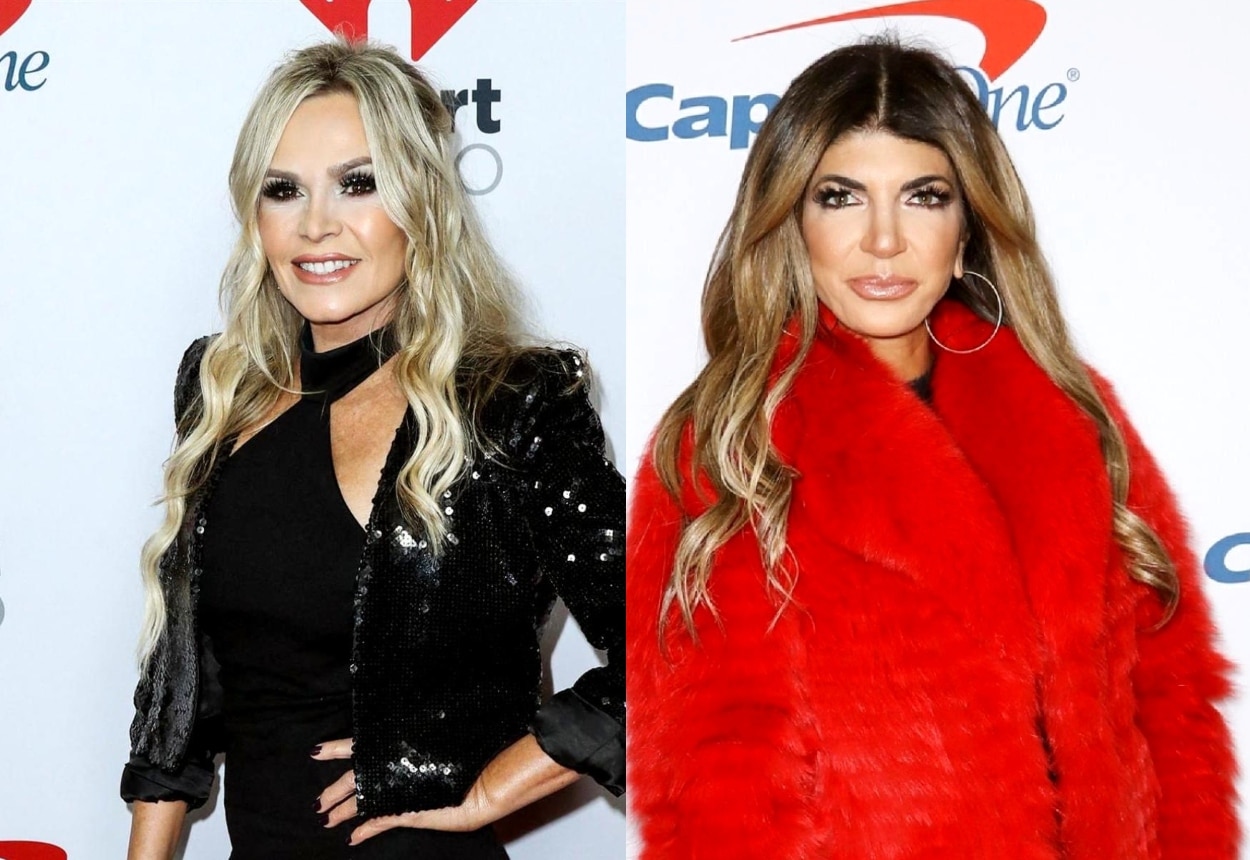 Tamra Judge isn’t afraid of stirring the pot on her new podcast, Two Ts in a Pod. The Real Housewives of Orange County alum is being painfully honest about her former colleagues on the network.

During one of the episodes, Tamra compared Teresa Giudice’s fiancé Louie Ruelas to Brooks Ayers (Vicki Gunvalson‘s infamous fiancé, who was accused of being a con artist).

On a recent episode of the podcast, Tamra revealed, via Page Six, “So Teresa unfollowed me because I said that Louie gives me Brooks vibes — you know, Brooks Ayers from ‘Orange County,’ Vicki’s boy.”

According to the outlet, Tamra is still following Teresa in spite of the recent developments.

“I said that because [of] the affirmation,” said Tamra, alluding to Brooks and Louie’s similar affirmations of praise (i.e., Louie gifting Teresa a scroll that lists the reasons he loves her). “Nothing more than that, because he was very big on the affirmations, and I said it right after he did that whole scrolling thing,”

Tamra’s co-host Teddi Mellencamp agreed with this, saying, “there’s just something [she doesn’t] trust about” Luis. In Teddi’s opinion, it “doesn’t feel right.”

On a more recent episode of the podcast, Tamra dragged another Bravolebrity, Andy Cohen, regarding his green wardrobe choice at the RHOC reunion.

“I was actually shocked by everybody’s dress, but you know what I’m going to have to give worst dressed to Andy Cohen. I don’t know what he was thinking with that suit,” she said in the episode, via Heavy.

Teddi mentioned Andy’s tweet about the suit (when he shared, “Can’t decide about my suit on this reunion #RHOC”). Because of the post, Teddi thinks Andy knew “it wasn’t a good suit.”

Tamra, however, gave Andy some credit. “At least he can acknowledge the fact that wasn’t his best look.” She also mentioned that Heather Dubrow’s dress wasn’t her “best.”

In a recent Instagram post, Heather wrote, “Thank you so much to the talented team that helped me look acceptable after being told to wear a ‘lilac sundress’ with a post surgery foot not ready for heels 🤔🤷🏻‍♀️😂.”

Teddi and Tamra said they were never required to wear certain types of dress at reunions, but they praised the outfits of Shannon Beador and Gina Kirschenheiter.

On Heather’s podcast, Heather Dubrow’s World, the star went into more detail about the situation, saying the cast was confused by the sundress requirement: “We were like, huh? Sundresses? Like we didn’t get it.”

Unfortunately, she found it difficult to “find anything even remotely appropriate” for the occasion. “I turned in a lot of dresses and none of them were approved.”