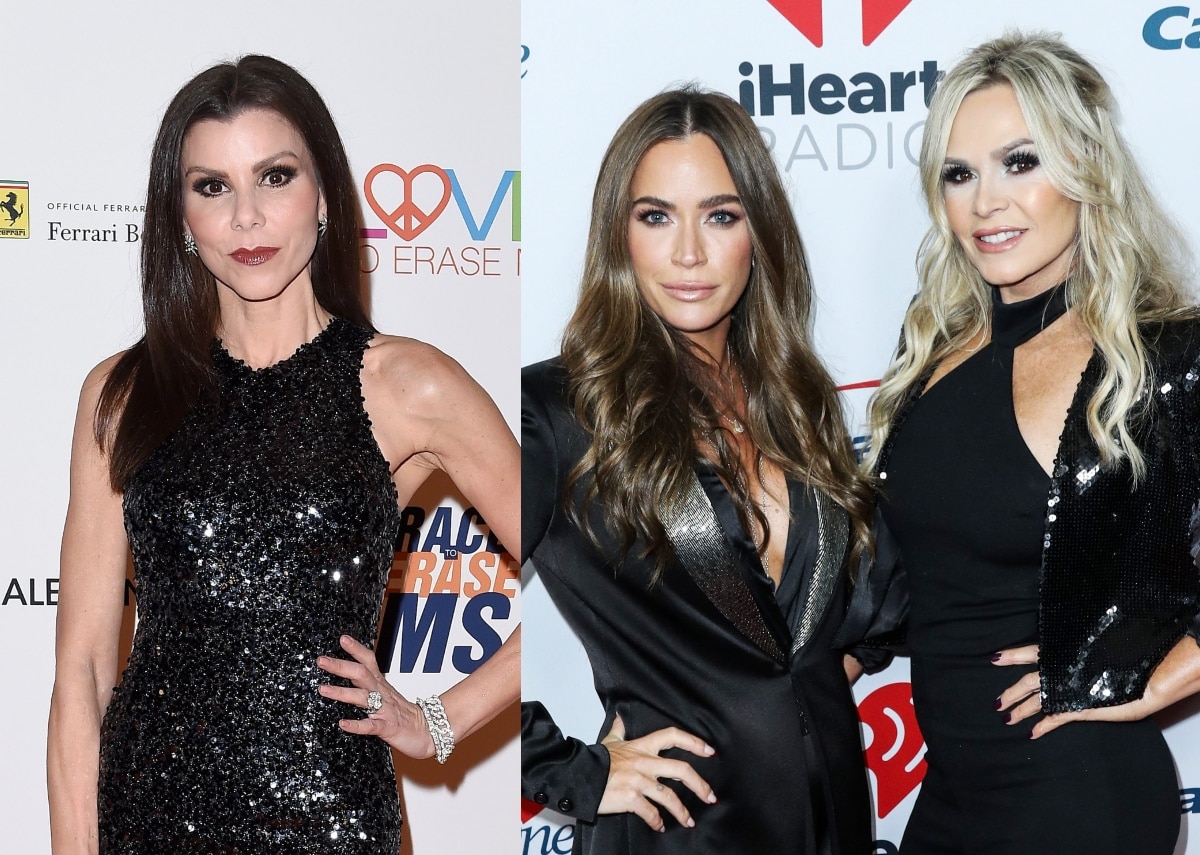 During a podcast appearance on Monday, the Real Housewives of Orange County star was asked about Tamra Judge‘s suggestion that she not only self-produces on the show due to her acting background but that she actually used her kids for a storyline.

“I think it was bullsh-t and actually Tamra and I texted about it the other day, cause I was like, ‘What? Really? What are you talking about? You’ve known me, you know me better than any of these girls. Are you out of your mind?'” Heather recalled on the February 28 episode of the Behind the Velvet Rope with David Yontef podcast, noting that she believes it was actually Tamra’s podcast co-host, Teddi Mellencamp, who made the claim.

“I just find that preposterous,” Heather continued, noting that she hasn’t met Teddi but “always thought she seemed nice.”

According to Heather, she doesn’t have time to self-produce nor would she be able to if she tried. That said, she does feel that Noella Bergener has been inauthentic on the show.

“When you think you are smarter than the show, you have lost … It doesn’t work,” she stated. “And that’s why I feel like you’re seeing a lot of backlash against Noella… She’s told so many interviews that she’s watched every episode. People are like, ‘She just brings all this for drama’s sake’ … I think it’s really obvious when someone’s self-producing.”

When it was then noted that Tamra claimed she would have been hesitant to talk about her minor child’s sexuality and that she doesn’t think she would have made that her storyline, Heather made it clear that was not the case.

“That’s why I texted Tamra. I go, ‘Why are you saying that?’ I would never use my children as a storyline. Ever,” she confirmed. “What’s so ridiculous about Tamra saying that is that … clearly that means there are people out there that that’s what they do … [But] my brain would never work in that direction.”

Although Heather admitted that she was encouraged to share her family’s stories on RHOC because she believed it would show other families “how normal this is,” she allowed her children, including Max, 18, who is bisexual, and Kat, 15, who is a lesbian, to have their own voices.

Looking back at a moment in which Kat discussed her sexuality on RHOC, Heather said that going into the scene, she didn’t plan to discuss the topic with her daughter.

“It wasn’t an intended conversation. It just was the conversation. And that’s where this show… can work really beautifully and not just be a sh-t show of drama,” Heather stated, noting that she was “so proud of the fact that [Kat] felt comfortable with cameras around to even have that conversation and, and be open about it.”

“And even afterwards, I was like, ‘Hey, if you’re not okay with that, like I’ll call the producers and talk to them.’ … [And] she was like, ‘No,'” Heather added.

While Heather doesn’t love some of the things Tamra has said on her podcast, she seemingly shaded Kelly Dodd while noting that certain ex-Housewives‘ podcasts are much more tolerable than the ones that spew “hate and vitriol.”

“I think that if you are making a living or extending your brand through a podcast and you’re doing like an after show and you’re giving your opinions and stuff like that, a lot of people do that sort of thing. And that I get,” Heather shared. “[But] I think if you’re trying to make a living off of poaching on former castmates and you know, just spreading hate and vitriol, I have no time for that. And that’s not a great lane to be in. And I am not talking about Tamra. That I find pathetic.”

Also during the podcast, Heather joked about looking “like a mob boss” during her tense conversation with Shannon Beador, during which Heather told her co-star not to ever mess with her family after learning she had told Gina Kirschenheiter and Emily Simpson about the legal action Nicole James took against her husband, Dr. Terry Dubrow, years prior.

“When I watched it, I laughed. I was like, ‘Oh yeah, it looks, it looks pretty dramatic.’ … But I was so upset and I wanted to be very clear that this is never happening again. Did I take it too far? Did I sound too crazy? You know, I don’t know, but in that moment, that’s how I felt,” she admitted.