Home Real Housewives of Orange County News RHOC Recap: Gina Calls Noella a D**k and Noella Claims Gina Betrayed Her, Plus Ryne Shuts Down Conversation With Jen and Walks Away

RHOC Recap: Gina Calls Noella a D**k and Noella Claims Gina Betrayed Her, Plus Ryne Shuts Down Conversation With Jen and Walks Away 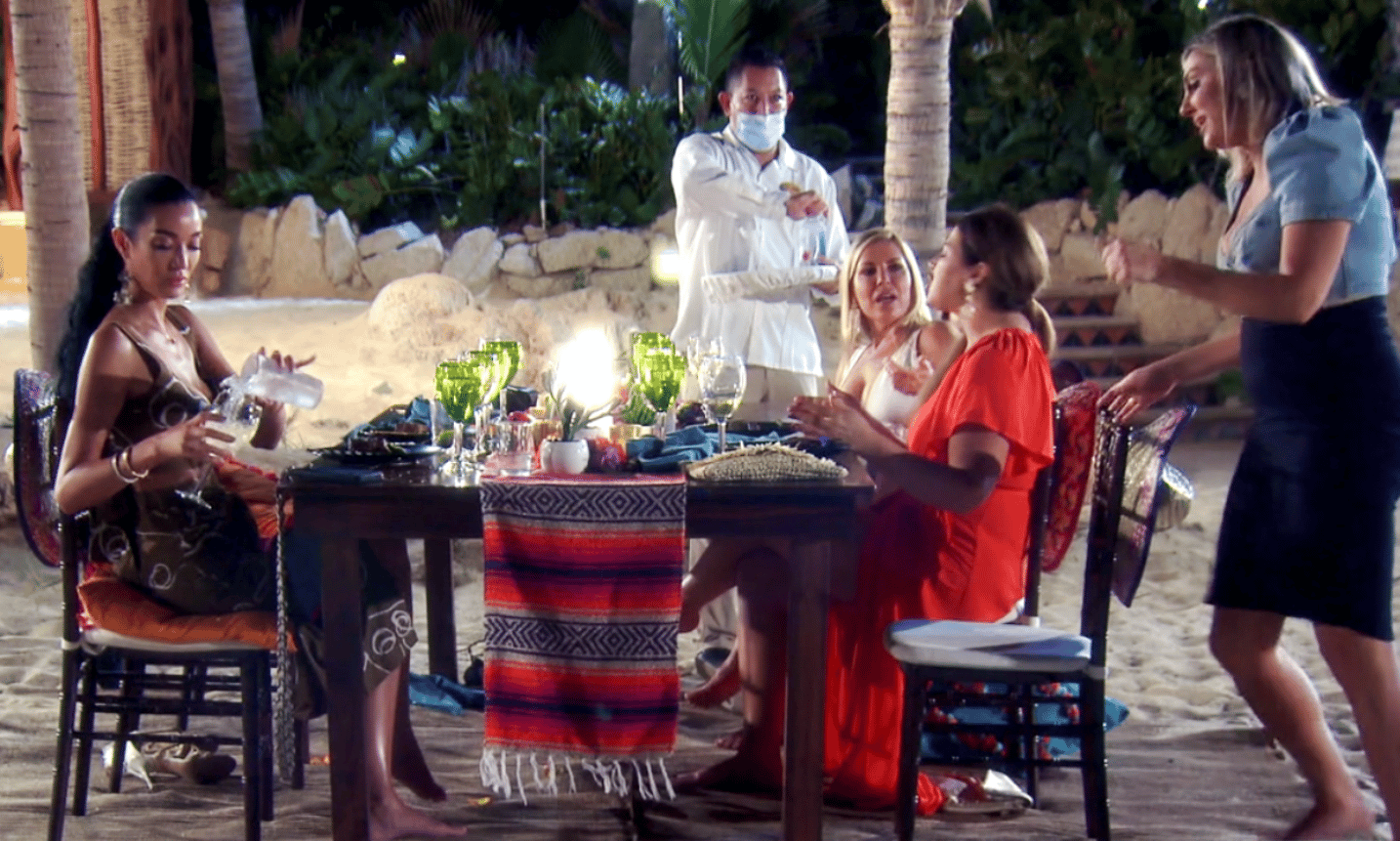 Will Noella ever understand that this show is called the Real Housewives of Orange County and not the Noella Show? On this episode, the women try to school her on appropriate behavior while Dr. Jen struggles to have her husband behave appropriately like a loving partner.

Heather has given up on trying to teach Noella what is considered inappropriate, but Noella is too busy vaping to even pretend to care. Heather excuses herself from the dinner table but makes it clear that she is exhausted by Noella’s antics. It is always so negative when Noella is around, and Heather called that THIS would happen if Noella tagged along on the trip.

Gina is p*ssed at Noella because now she is turning on her and questioning all that Gina does. Gina states you “can’t drown with everybody” and that Noella is “such a d*ck all the time” as she storms away. I mean, she’s not wrong. Left at the table are Jen and Emily, who are trying to talk sense into Noella. Noella interrupts Emily, dismisses her, and sends her off to check on Gina (rude). Even more strange is that Emily actually LISTENS to Noella! Who died and made her queen?!

Tequila Shannon emerges in her sombrero (seemingly out of nowhere), and she proceeds to be the bartender on the last night of vaca (if you can even call it that). Emily rejoins the group, and when she topples over into the sand, Jen uses that as her exit. All I have to say is, bring back the tres amigas. Emily and Shannon riding on a piñata is simply not cutting it.

Back in the OC, Jen is having a special mommy-daughter day at the nail salon. Jen states that she is feeling guilty about being away on her two-day Cabo trip, and so she is trying to buy back time. Jen shares that her daughter changed her name from Vera to CeCe at age one-and-a-half. Interesting. Changing names must run in the family (see: Husband, Ryanà Ryne).

Heather and Gina meet for a day date, and they chat about how things have been since coming back from Mexico. Heather shares that she is taking her twins on a New York college tour and would LOVE to have Gina come along for the ride. Heather describes her friendship with Gina as “easy,” and she hopes that this NY trip will be less stressful than Cabo.

Gina shares how Noella questioned her integrity and character, and so, Gina probably isn’t that support person she thought she could be for Noella. Gina makes it clear she cannot support Noella because she cannot trust her, and you can almost see a twinkle in Heather’s eye upon hearing this news.

Shannon is busy at John’s house preparing for her event. She has invited Heather and Emily, plus their significant others, over to booze on his boat and have a nice evening. Shannon takes on a Gilligan’s Island persona and just follows whatever orders John barks at her. Once they return to John’s, the hibachi dinner is ready to go. Besides the excessive smoke inhalation from the grill, things seem to be going well… that is, until John brings the whole mood down.

John shares deep family trauma — he is actually a Junior, but he was disowned by his father. He explains how his dad said he was ashamed of John and that he should change his name. The group listens intently — until naturally, Terry jumps in to explain that his a-hole stepfather’s ways pushed him to be who he is today. The adversity was what drove Terry. Emily also shares that she did all these things to prove her worth to her dad. She now understands that the approval and feeling of success must come from her, not from other people.

Later, Shannon and Emily meet up with Noella at the “Q Dub” (aka the Quiet Woman), the scene of the crime with Kelly Dodd. Ah, memories. The women discuss Cabo, and Emily suggests Noella reach out to Gina… perhaps at Emily’s upcoming game night? Noella felt like she went deep fast with Gina, so ending communication with her has been hard.

To change the subject to something light, Emily asks what a “stack of vaginas” is. She found out about this sexual escapade Noella took part in from Jen. Noella believes that it is rude of Jen to bring up that topic, but it makes sense since Jen would rather not talk about her own personal life. However, Noella talks out of both sides of her mouth… on one hand, she’s “happy to share her stacks with anyone” (wanna see a picture??), but on the other hand, she is fake-mad at Jen for sharing with Emily. Which is it?

In the meantime, Heather heads over to Jen’s house and begins mixing up some cocktails in Jen’s kitchen. What a guest! Jen shares that the kids and Ryne are at an “end of summer” dinner that she did not get invited to. Jen immediately opens up and tells Heather the newest regarding her relationship. Jen explains that her marriage is crumbling all because Jen was the one who built the business while he stayed home with the kids. Heather speaks from a lot of personal experience, and she reminds Jen not to ignore her relationship.

“Game night is just an excuse to drink and be ridiculous.” – Emily. She is holding this gathering for all the girls to come together and have fun… something they haven’t done in a while. Shannon shares that although she has come to win, she is a bit hungover from all the shots taken the night before at the Q Dub. The ladies are well on their way to getting drunk, and they even reenact the infamous stack of vaginas (that Noella is SO offended talking about. Right).

Gina grabs Noella and brings her aside for a serious “twalk.” Noella claims she feels a betrayal with Gina, and Gina calls Noella paranoid. Gina doesn’t understand Noella, and so she has decided to take a step back from this friendship.

While the other ladies are busy unraveling toilet paper and running around with plungers, Dr. Jen is at home trying to live that mom life. She sits down with her hubby and hears about the kids’ first day of school. Jen shares that she hasn’t been able to sleep, and she tries to get her hubby’s attention but he’s just too busy with his dog. She wants Ryne to understand her feelings and wishes he would validate them more.

Ryne gives her a canned response to most likely try and shut her up from complaining, but Jen is not thrilled with the way the conversation is going. Jen wants more support; Ryne thinks it’s the “Jennie show — give me more attention.” Ryne refuses to continue the conversation (probably in front of cameras), and he walks away to “take a break,” leaving Jen throwing her hands up in the air. She follows him into the house and begs him to continue to discuss. His refusal escalates and he leaves the house to take a walk. So, this is going great. So much for all that advice, Heather…