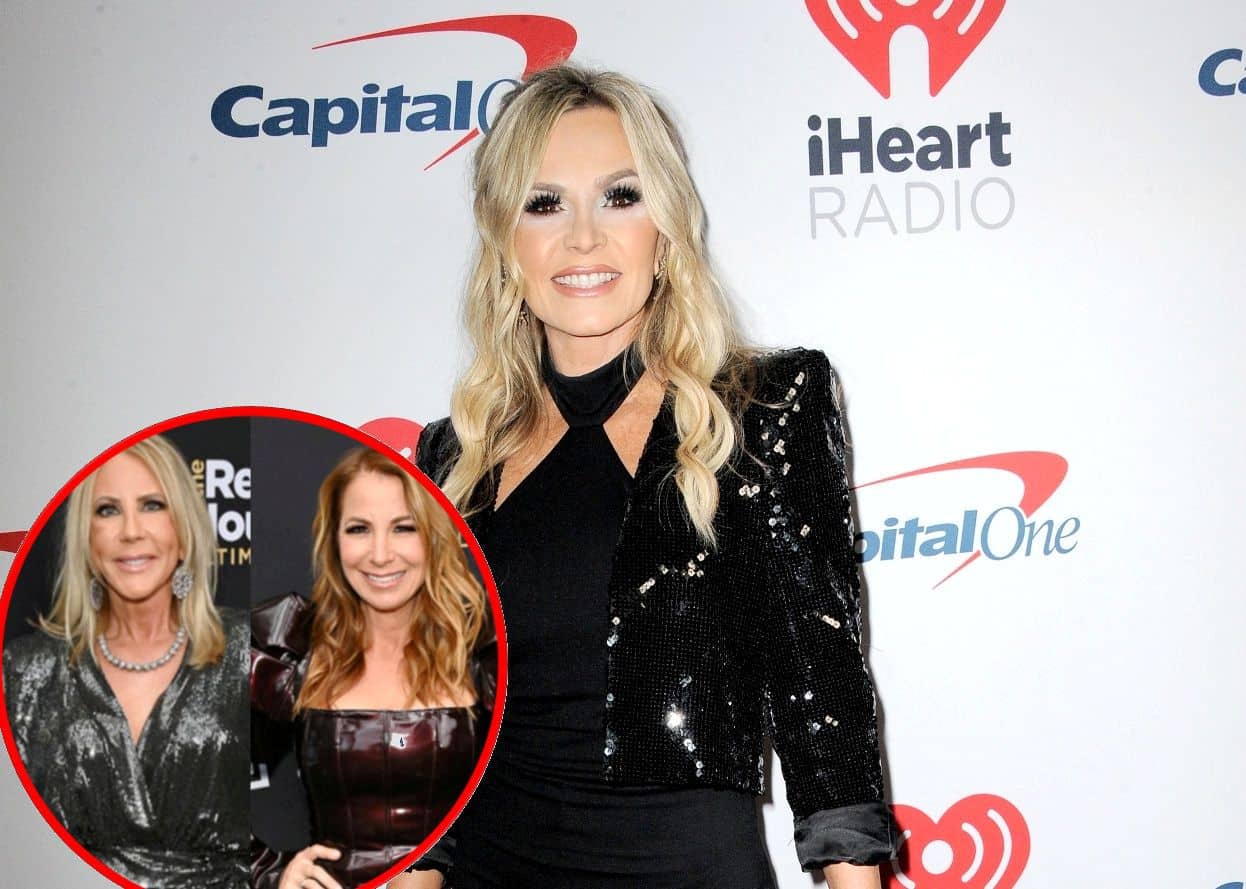 “The judge is back, and drama is in session.”

Thus Tamra Judge marked her triumphant return to The Real Housewives of Orange County. The 54-year-old star, who was fired from the show after season 14, declared the news with Andy Cohen on Watch What Happens Live.

Jill Zarin first leaked the information when it was still hush-hush, which triggered a scathing post from Tamra, who called her Bravo colleague a “thirsty b**ch.”

On a July 20 episode of her Two T’s In A Pod podcast, Tamra revealed the details behind her return. “I’ve been talking with production for about two months now, and I wasn’t really sure, were they going to ask me back, not ask me back, I really didn’t know. And right after [my dog] died, they literally called me and said… ‘I have really bad news for you.’ And I went, ‘Are you kidding me?’ He goes, ‘the bad news is… you’re back.'”

According to Tamra, Andy wanted to announce the news on WWHL with Vicki Gunvalson (who wasn’t asked back). Tamra, however, asked Andy if she could inform Vicki herself, to which the producer agreed.

At the end of their phone call, Tamra asked Vicki, “Please don’t tell anybody.”

Unfortunately, two days later, Vicki “goes to the Hamptons to this huge charity event that Jill Zarin was throwing, and the next thing I know, Jill Zarin is outing that I’m back on Housewives.”

Tamra said Jill “knew exactly what she was doing because she did it on a subscription account on Instagram… There’s a new section in Instagram that you can actually get paid… Leave it to her to be the first one to sign up.”

The star continued, “And the way that [Jill] announced it, you know, it was a little shady. She’s like, ‘breaking news. Tamra’s back on OC but my good friend Vicki’s not happy’… It wasn’t like, ‘Oh congratulations, Tamra’s back.'”

Tamra then “lit both their a**es up on text,” telling Vicki and Jill, “‘[This] is not your business, this is not for you to announce. Bravo Andy was trying to do this big announcement, and you just really kinda screwed it up.”

Co-host Teddi Mellencamp then declared, “Vicki’s betrayed your trust.” She soon asked the question, “Did they plan that together? Do you think that Vicki asked Jill to do it or Jill did that on her own?”

Tamra responded, “I don’t know. I’d hope to think that Jill did it on her own… [Vicki] denies it, she said she has nothing to do with it… [Jill] made it seem like she was mad because Vicki’s not back and I am.”

“Jill has [since] been blowing me up, text messages, voicemails, [saying] ‘I didn’t mean it, I didn’t mean it. I always go on there and say breaking news. And I only did it to my subscribers.'”

After Tamra called Jill a “thirsty b**ch” online, Tamra took the post down. “I figured it got out there enough,” said the star. “I got my point across, I’m gonna take it down.”

“And then [Jill] had the balls to say, ‘My entire charity event was focused on your return and everything that was going on…’ Well, if you’re doing a charity event that’s supposed to be for Bobby [and] cancer and all the stuff, why are you talking about me? Why are you doing breaking news as you’re walking into the party?”

She added, “Jill is thirsty as hell, she’ll always be thirsty. So if she gets back on the legacy [show] I can’t wait to announce it.”

Tamra also said Dorinda Medley discovered that Jill was “selling our likeness and our timelines and we have pictures of us on her website, which were totally copyrighted because they were Peacock’s pictures… She was selling all this stuff.”

Dorinda and Tamra then confronted Jill and told her to remove the images. “This woman lives in a totally different universe than any of us live in,” said Tamra. “She was arguing with us not to take it down.”

When Tamra told her husband Eddie about the RHOC return, he was “so supportive.” She believes he was “happy because there’s certain castmembers — that I won’t name — that are no longer on the show that had said some horrible things about him and just went after our business… He doesn’t have to worry about that now because the girls that are on there — except for one of them — just doesn’t go there.”

Tamra also shaded Dr. Jen Armstrong, a recently fired castmate who insinuated that Tamra has little going on in her life and suggested Tamra was thirsty to be back on RHOC.

She then explained, “I think it’s just another case of a fired one-hit wonder, fired, and now she’s gonna speak out.”

Tamra revealed there are several new castmates in season 17 (which begins filming next week). When her co-host asked if we “know” any of them, Tamra answered yes.

According to Tamra, they’ll announce the names soon.