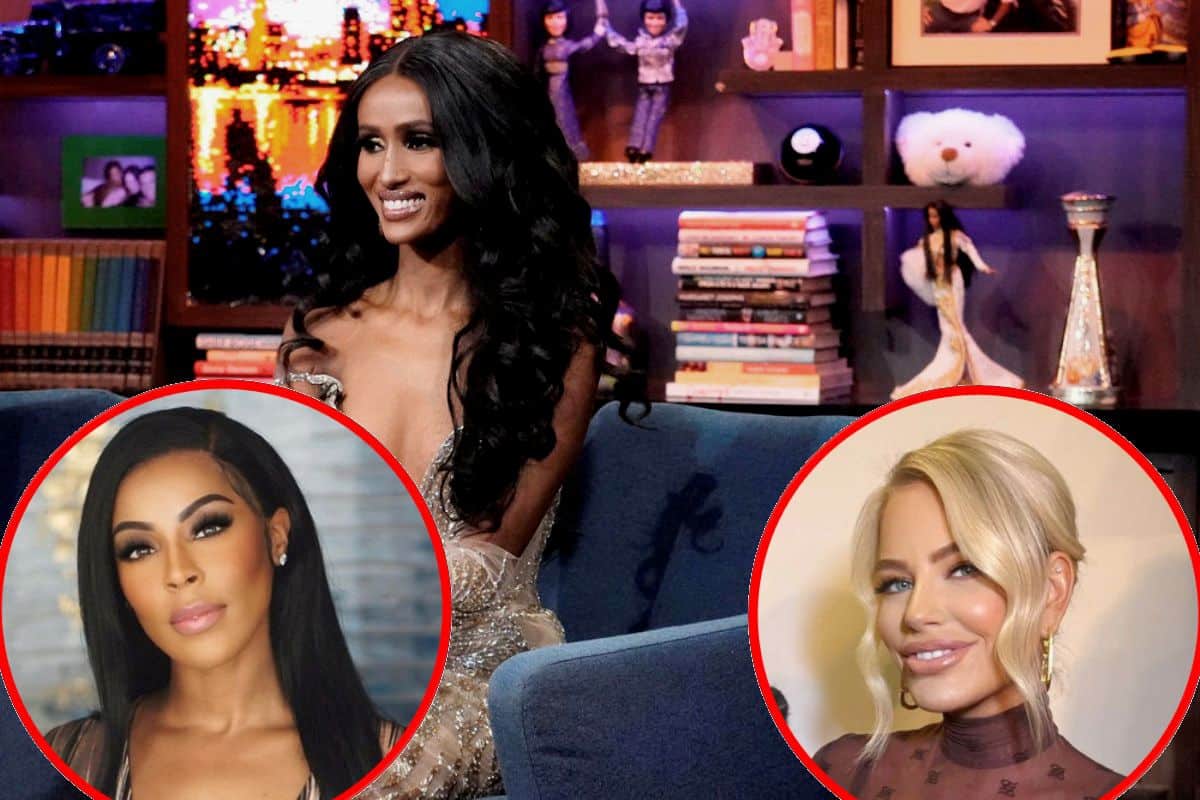 Of all the frenemies of Chanel Ayan on Real Housewives of Dubai, perhaps her two greatest are Caroline Stanbury and Caroline Brooks. As season one plays out, the 44-year-old continues to have beef with her castmates — both on and off the screen.

Chanel’s feud with Stanbury began in the first episode after the Ladies of London star refused to invite her to a hen party. Stanbury also shares a feud with Chanel’s friend Lesa Milan, which turned into a Twitter war. Unfortunately, there are several such wars at the moment between the co-stars (and Lisa Rinna).

In an interview with In The Know, Chanel addressed the social media warfare. “I just feel like some people, maybe they’re just too thirsty. They should keep it for [the] reunion,” said the star.

During the said reunion, Chanel wants to address “being [called] ‘them, these ones.'” This seems to be a reference to Stanbury, who made a comment about Sergio being too friendly with the other castmates, and many fans called the remark racist.

Chanel also threw shade at Brooks: “I’m not like Brooks, I don’t have to [share] everything for seven people on the internet. I want to keep it for millions that are gonna be watching [the reunion].”

She then clapped back at Brooks and Nina Ali for labeling her the thirstiest ‘Housewife.’

“If I’m the thirstiest one, why am I not on social media 24/7? Cause that’s where you need to be, ok, if you’re really that thirsty. And Brooks, you’re the thirstiest because you only talk to seven people on the internet,” said Chanel. “The difference between me and Brooks is I’ve been in [the] fashion industry. I’m used to attention. I’m used to all these things. She’s [a] brand new person. She’s never seen a camera in her face in her life.”

Chanel was eventually asked about her friendship with Lesa and the accusation that they think for each other rather than themselves.

“She’s not really thinking for me,” said Chanel. “That is really the honest truth. I just think that we’re so close, and we love each other… We treat each other with respect, and other people [don’t] know how to treat each other. And there’s no loyalty. So that can [bother people] that they don’t have that.”

Chanel’s ‘friendship’ with Brooks, however, isn’t so loving. The star feels she’s in a “friend enemy situation” with Brooks, and there’s no sisterhood. “[I] can’t trust her whatsoever.”

The host asked about her conflict with Sara Al Madani, who recently bestowed her wisdom on Chanel.

Regarding her current peace treaty with Caroline Stanbury, which was shown in recent episodes, Chanel explained, “It’s not gonna last… We tried. We really did try… We don’t get along most of the time, but there’s a lot of things about her that I actually respect and admire.”

Chanel also touched on Stanbury’s feud with Lesa when Stanbury questioned Lesa’s business with her husband Richard Hall. Although Chanel wanted to stand up for her friend, Lesa told her not to get involved.

When asked why Sergio attends so many events (while the other castmates’ husbands are absent), Chanel responded, “Because most husbands have jobs… [Sergio] loves camera. He loves attention. He enjoys it… I just feel like next season they should give him his own gold bar… because he’s always there.”

In an interview with Page Six Style, Chanel addressed her controversial ‘wedding dress,’ which she wore to Sergio and Stanbury’s engagement party. According to Chanel, she was just doing as she was told.

“I did understand the assignment. I was told, ‘Wear white.’ I did f—king wear white,” said the star. “My intention was to look good and to feel good and be fabulous and be sexy and be stunning. All of that!”

The model continued, “You know if I’m going to show up at any party, I’m always overdressed and I always look good. It’s not my problem if you’re coming underdressed.”

Chanel’s gown was a lacy bodysuit with a cape by Amato Couture. The bride-to-be also assumed Chanel was wearing a veil (it was her platinum hair).

“That has to be the the biggest slap in the face any guest can do to a bride,” said Stanbury during a confessional interview, via Page Six. “Anybody else with any ounce of etiquette would understand that you don’t go to a woman’s wedding in a wedding dress.”

In the same episode, Chanel declared in her own interview, “First of all, Caroline, I’m a black, gorgeous woman. We do not look alike whatsoever. And I wore couture from Amato. She definitely wore Shein.”

Stanbury was actually wearing a $12,000 gown by Celia Kritharioti. Even so, according to Chanel, Stanbury “cannot compare or compete.”

“I think my face is beautiful. That’s all that matters, right? I’m going to look good in plastic dresses, plastic whatever, so I really didn’t think about style.”

After learning about her role in the cast, Chanel’s designer friends paid her to wear their clothes on screen. “When it [got] around, because I know a lot of designers… they pay me to wear their clothes, they pay me to do stuff, I just started wearing them,” she explained. “And I have a lot of love for Filipino designers because a lot of the designers I wore are Filipinos and local Emiratis that I’ve walked and modeled for for many years.”

Chanel plans on making bolder style choices in season two. “Now that I know people like my fashion, f—king next season is going to be amazing,” she said, “if I’m ever asked to come back!”