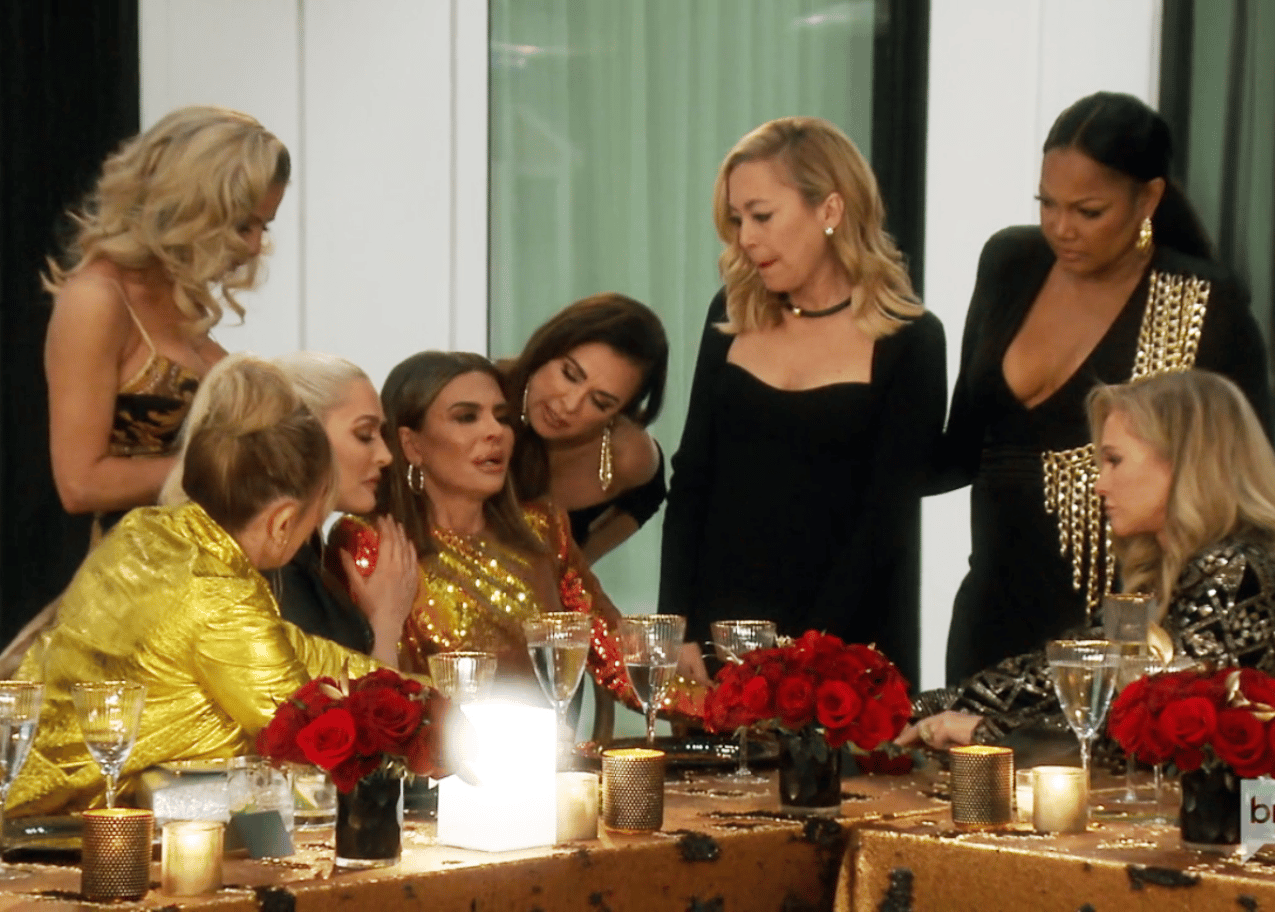 Rinna just can’t seem to “let the mouse go” on this episode of the Real Housewives of Beverly Hills. Just when the dust seems to settle for Sutton, she is back in the hot seat trying to figure out how in the world things escalated again. Can these two ever just get along, and can Rinna learn to live without her mother??

So it turns out that PK and Dorit got their teeth redone together about two years back because couples that get new teeth together, stay together… or something like that. PK claims that his teeth are the reason for his recent run-in with bad luck (home invasion, DUI), but I am not buying it. As PK gets a routine cleaning, Dorit hovers close by and talks to the dentist about a charity very near and dear to her heart: Homeless Not Toothless. She has decided to host a dinner for this charity and even invites her dentist to the event. By the way, did you know Sharon Stone is also on this board for the charity? Because if not, Dorit will remind you viewers approximately 25 times…

Crystal pays a visit to Sutton’s store, and Sutton shares that she is going to need some help since her daughter (an employee of the store) may have COVID. She half-jokingly asks if Crystal would want to come work for her, and she reminds Crystal that she pays commission! Crystal explains that although she worked at Victoria’s Secret and Finish Line, she has hung up her retail hat.

Crystal lets Sutton know that she has already heard Rinna’s side of what went down at the wine tasting, but she wants to hear Sutton’s version. Sutton explains that this is on Rinna since Sutton has done all she could to smooth things over.

Crystal nods knowingly and further states that Rinna also shared with Crystal that everyone was talking about her eating disorder the other day even though she wasn’t there to defend herself. Crystal states that although her lifestyle is normal for her, she realizes it is concerning for others. Sutton hints that the group seemed more disbelieving than out to *help* regarding her eating disorder. Crystal is annoyed and feels like, “My vulnerability is met with judgment.” She states that she is struggling and thinks that the ladies are insensitive for putting pressure on her and her choices. She is opening up about personal struggles and is working on her own time… judgment free.

Diana “surprises” a singing Asher (since Diana claims Asher forgot she was in the house when he sat down to tickle the ivories even though there were cameras up in his face), and they discuss Diana’s miscarriage. Diana is happy that Asher is nonconfrontational and understanding. Diana explains that she is willing to restart the hormones so they can have their second child and that the miscarriage brought them closer. Diana is hopeful that their future holds another baby.

Erika comes over to Kyle‘s house for a sound bath and some stretching — ya know, just normal rich lady afternoon activities. Erika claims that she has a “love affair with pain,” and the trainer pushes her body into a pretzel. When it’s Kyle’s turn, she also bends and twists. She explains that she has something called “hypermobility syndrome,” and so her arms and legs go numb sometimes, but I guess that’s the price one has to pay for a killer split.

After the session, they sit down to drink some tea and spill some tea. Erika explains that the guy she is loosely dating is older than her but younger than Tom. History repeating itself? Erika further states that she is “over” the ‘Erika has a drinking problem’ story circulating, and she doesn’t think Garcelle is coming from a good place. Erika says that she is fighting to be who she wants to be again, and she is curious about how Dorit’s upcoming event is going to go. Kyle and Erika then scoff at the name of the charity, Homeless Not Toothless, and we are reminded that they are truly something else…

Everyone is busy getting ready for Dorit’s dinner, but Sutton is mainly preparing to face Rinna. When Kyle FaceTimes Rinna, we learn that Harry Hamlin is not coming to the event because “Harry’s not going out.” LOL. Translation: He doesn’t wanna be associated with his wife. Could you blame him?

Dorit is busy fussing over the lights and wondering who the surprise guest is that PK pulled out for entertainment. Kathy arrives with her friend (who used to be friends with the Vanderpumps #smallworld), and I adore how she calls Diana out for Asher singing at the party, and she tells Rinna that her sequined dress looks “wet.”

PK knows he has an audience to talk about what he does for a living and who he does it for so he name-drops and shares his DUI story. “When I got pulled for the DUI, I had dinner with John Legend and Lionel Richie.” He explains that the whole DUI situation went from bad to worse since the cops totally did not believe him, and the real lesson is that “when you think you’re OK, you’re really not.” Love how he drops this not-so-subtle hint right in front of Erika…

The last time all these women were together was like six weeks ago… trying to get these ladies all together in one place at the same time is proving to be impossible. It is interesting that Rinna is the first to welcome Sutton over to the table considering they were at each other’s throats… Erika towers over the women in her 15-year-old hooker shoes, and Dorit talks a big game AGAIN about a mystery man who evidently wants to date Garcelle. We will believe it when we see it, Dorit!

Dorit stands to make a toast and talks about the charity Homeless Not Toothless. She shares that her dentist offered to donate an entire smile and everyone beams. Perhaps the ladies should take a cue from Mauricio and PK. They are besties. PK buys Mauricio gifts, and they just have fun. On the other hand, we are stuck with loud-mouth Rinna who simply does not know when to say when.

Apparently, when Kyle FaceTimed Rinna earlier, Rinna denied telling Sutton to “get the f*ck out” of her house. Kyle, ever the pot stirrer, leans over to find out directly from Sutton. Cuz THIS is the time and place. When Garcelle and Sutton confirm, Kyle is aghast. Kyle turns to ask Dorit, and then when Dorit confirms, Kyle yells out to Rinna. In the words of Sutton, “This is a great way to do this conversation.”

Rinna continues to deny that she dropped the F-word on Sutton and asks, “Was it brutal?” Seems like Erika isn’t the only one enjoying the drinks this season, huh? Rinna is still going on about this, and she claims she is angry because Sutton did not apologize to Harry Hamlin. Sutton comes back and tells Rinna that she sent Harry an apology text, which Rinna denies, and she demands a public apology. Sutton is blown away and realizes that she simply has to “do what she says then it goes away.” This is mortifying. Should we remind these women that there are strangers at this table??

Rinna screams across the table, “Why is it your f*cking problem and not Garcelle’s? What made you do that? That’s the answer I want. When I get it, I will let it the f*ck go.” Woah, Rinna. Calm it down. Love when asked who started this, all the ladies point their fingers at Kyle.

Luckily, Melissa Etheridge (aka Sutton’s girl crush) takes center stage to sing “Come to My Window” (thanks, PK!). The women are then too star-struck to bicker. Diana is p*ssed Asher is not belting out his tunes, and Garcelle is embarrassed that Melissa Etheridge was privy to their asinine behavior.

When Melissa Etheridge exits the stage, Sutton comes over to Rinna, and Rinna tearfully cries that she doesn’t wanna do this anymore with Sutton. All her late mother’s things just came to Rinna’s house today, and her pain is not about Sutton. “I have a lot of anger and feelings about a lot of things in my life. I’m in a lot of pain and I’m doing the best I can and I’m sorry.” Garcelle calls this a breakthrough. Rinna tells Sutton over and over that “it’s not about you,” and she claims she just needs support. Her behavior is due to the pain that she is still trying to work through. But the jury is still out if Rinna actually shed a tear though…