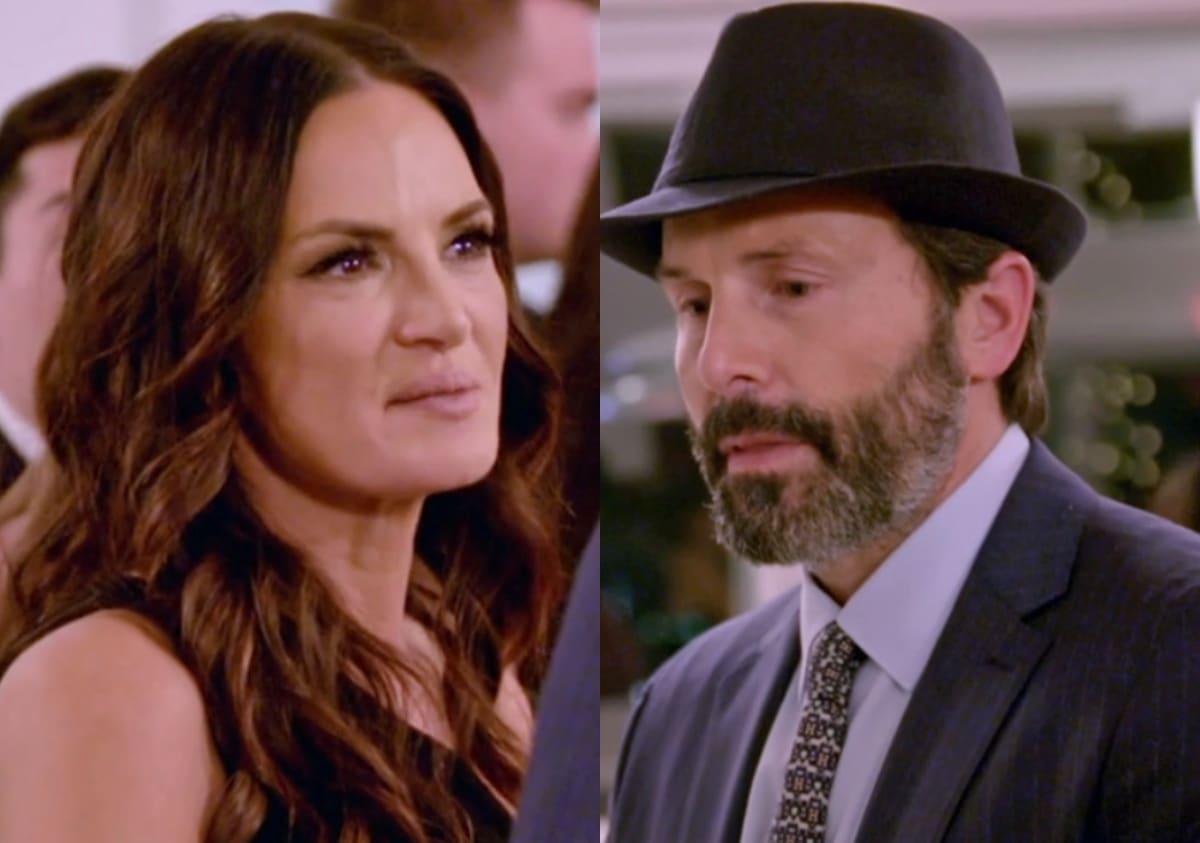 A haunting audition tape from 2019 runs of Jen talking about what she does to make money. The tapes further show that Lisa and Meredith always have each other’s backs, and Whitney and Heather are best buds AND cousins. My oh my, have the times changed in 2022, amiright? On this season premiere of The Real Housewives Of Salt Lake City, we learn that “what lies beneath that image of perfection” is sometimes pretty dark…

The season kicks off with a bang as Meredith and Jen debut their brand-new friendship. Who would have thought that Meredith and Jen would be choosing to hang out? Simultaneously, Lisa and Heather get together!  What is happening?!

Meredith shares that since the reunion, Jen seems to have found a newfound understanding for Meredith, and so, they have grown close. Bonus: NO fighting. Meredith shares that after Lisa’s tirade last season, she is still processing her feelings. Although bothersome, Meredith’s issues are nothing in comparison to Jen’s current situation. Her trial is in a month and a half, but before all of it goes down, she plans on having a party for Coach Shah… but she wants to invite Lisa. Therein lies the problem…

Lisa said she needed Heather, and so, here we are. The two ladies are toasting “to us,” and Lisa comes right out to ask for some help with Meredith. Lisa feels like the worst person on Earth in Meredith’s eyes, and she explains that even though she went for her family, she was in a blind rage and denies that is truly how she feels about Meredith. Heather tells Lisa that she has to straight-up eat some humble pie in this situation in order for things to get better.

Meanwhile, Meredith is still iffy about Lisa and claims that she hears rumors about Lisa. Unlike Lisa, Meredith doesn’t spread those rumors, whereas Lisa wastes no time spitting things out. According to Meredith, there have been questions about Lisa’s marriage and her business, and she calls it all fair game since Lisa dragged Meredith last season.

Heather lets herself into Whitney’s house, and they chat with Whitney’s daughter, Bobbie, who is evidently boy crazy. The good Mormon girls share that they had their first kisses at 15 and try to direct Bobbie with her high standards of men.

The ladies move into the speakeasy in Whitney’s house, and Whitney explains that she is on a healing journey. She talks about how her past keeps coming up and that there is some trauma in her early childhood. Whitney states that the Church is one of the biggest wounds she has, and so she is choosing to officially leave the Church. Whitney believes that the freedom she will feel once she is excommunicated will be all that she needs to rid herself of the tether to the Church. Heather is not quite ready to cut ties the way Whitney can because of her family, as she feels like it would be “the final knife in their back.” However, Whitney prints off the Church quitting paperwork and proudly signs on the dotted line.

Jen’s new house is WAY smaller than the chalet we are used to (it’s ONLY 4,500 square feet), and she is complaining about her current closet space. Jen explains that Coach Shah is the voice of reason and talked her into downsizing — the house AND the Shah squad.

Coach will be turning 51, and so her friend, Angie K., has offered up her home to host the big party. Jen explains that every penny is going to fighting her case, but she swears she can still throw a Harlem Nights-themed party on a budget. She runs through the guest list, and when Coach hears that Meredith is going to be there, he makes it clear he does not want this party to be a “platform” for something else. With Jen’s looming trial, they need to keep a good head space. Jen explains that she will not be taking a plea deal because she didn’t do anything, and she worries about being away from her family if she is found guilty.

Meredith is also in a new house, but her place is massive as opposed to Jen’s. Meredith explains that she is having fun “being an empty-nester-wanderer,” but she is still irked by Lisa’s commentary. She wonders what John Barlow does for a living “other than follow Lisa around,” and she reminds us all about Seth’s thriving career and his 4,000 employees. Meredith ponders about the Barlow distillery in Mexico, and she states she has yet to see them go to Mexico since she has known them. In 2018, the company was reporting losses and had some outstanding debt. Interesting… for a lady questioning Meredith’s life, there are plenty of rumors flying around about Lisa. Meredith wonders if Lisa is so defensive because she is hiding things in her life.

It’s the night of Coach’s party, and for a lady on a budget, Jen seems to have gone all out. Thank goodness for good friends like Angie K.! Angie K. is a super cool old friend of Heather’s as well. She has known Angie since she was 15!

Lisa worries that the night is going to be awkward the minute she sees Seth and Meredith. She doesn’t want their 10-year friendship to be thrown away and has hopes that maybe things can get better. Eventually, Coach and Jen arrive, fashionably late, and one would never know this lady is facing a trial shortly by the way she behaves! Meredith is the last to arrive, and the tension is thick. Meredith avoids Lisa, and we get a look at the guests, including Glen Davis from the Celtics.

Heather finds Meredith to let her know that she met with Lisa, and she is happy to see that Meredith was able to put the differences aside to attend the party despite their issues. Seth calls it “brave” for Meredith to be there.

Jen makes a speech, and she explains that due to all they’ve been going through, it is important to have support from their friends and families. She is happy to be there to celebrate WITH Coach because who knows what the future may hold for the Shah-mazings.

Seth finds John in the crowd, and they seem uncomfortable until Seth makes it clear that their relationship cannot suffer because of the actions of their wives. Everyone seems to be having a great time, and when Lisa chats with Heather and Whitney, she explains that she doesn’t think the time is right to talk with Meredith about their issues. Whitney suggests they take a quick trip before Jen’s trial, and Scottsdale gets suggested for the girls’ trip.

Lisa does eventually walk over to Meredith and give her an awkward hug.  She tells Meredith that she is sorry and wants to talk, and Meredith coolly states that although Lisa hasn’t reached out in a long time, she will meet with her. Lisa then latches onto Seth and tells him that she regrets all she said and swears she doesn’t feel that way about Meredith at all.

Seth remains calm and tells Lisa that they were “surprised” by her hurtful comments. Lisa claims she hasn’t been able to sleep, and that at the end of the day, she is a “girl’s girl.” Lisa does her Lisa cry and tells Seth that everyone told HER that Meredith is not her friend. Seth tells Lisa none of what she said makes sense, and Lisa claims she didn’t even remember saying those things. She says she was coming from a place of hurt, not hate. Lisa makes excuse after excuse and tells him that no one asks about her and what’s going on in her life. Lisa word vomits all over Seth and just wants her apology to be heard.

Seth reports back to Meredith and tells her that he was not ready for all of that. Seth further tells Meredith that Lisa appears to be “excusing her behavior,” which is not going to go over well during that upcoming meeting, I am sure…