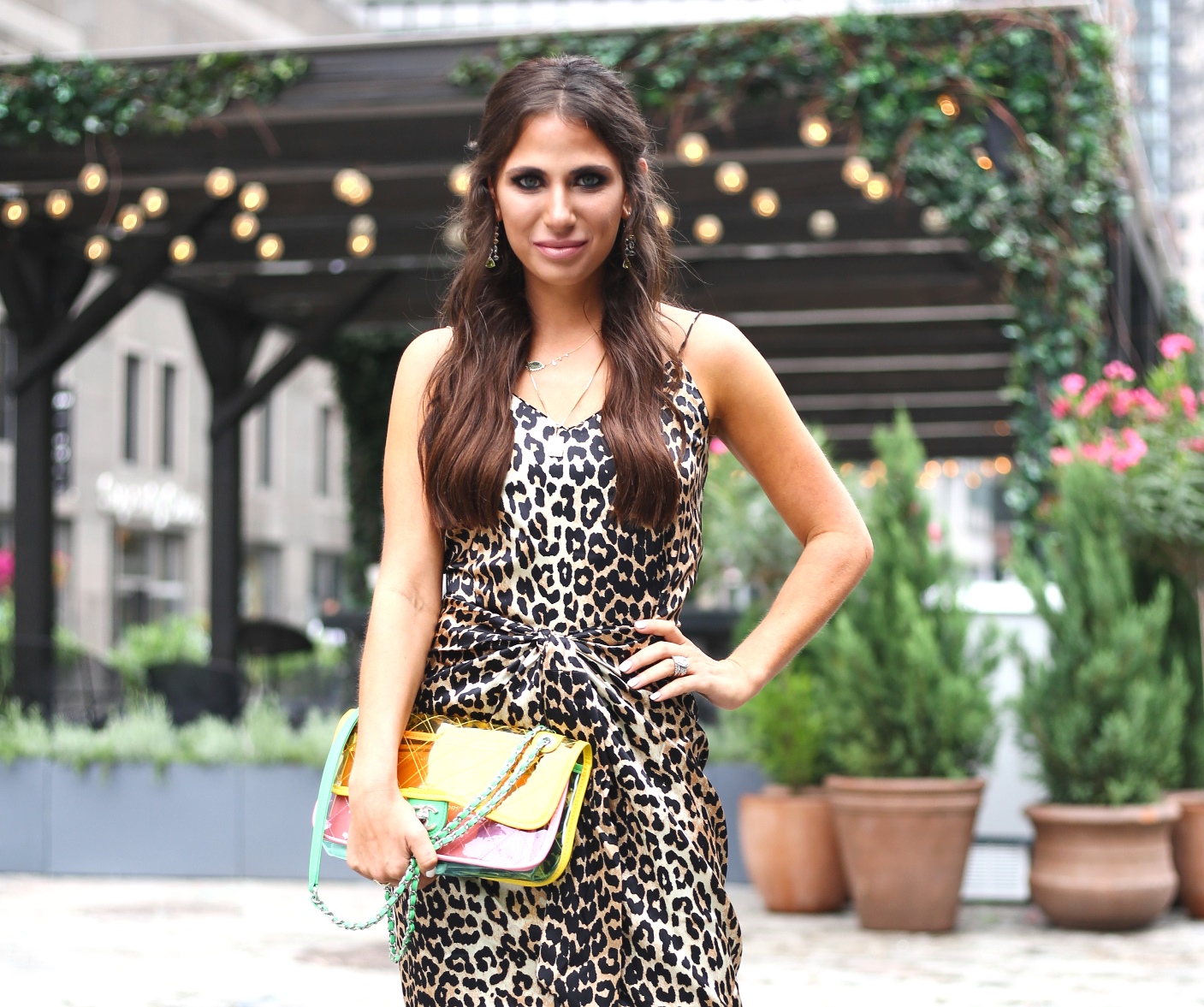 The Real Housewives of New York City’s reboot has already lost one of its new stars. It’s been confirmed that influencer Lizzy Savetsky has chosen to quit the franchise mid-production after she was overwhelmed with antisemitic rhetoric and hate alongside threats.

Lizzy took to her Instagram on Monday night and addressed her exit in a post, saying that the rumors that she received antisemitic hate were indeed true and that “this path [RHONY] was no longer right for me and my family.” 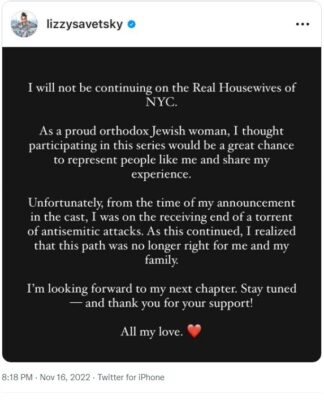 Lizzy, 36, who is of the Jewish faith, has never shied away from expressing her religious or political beliefs, and apparently, it hasn’t sat well with fans and allegedly some of her RHONY costars.

“As soon as she was announced, she was getting insane threats and anti-Semitism on social media,” a source confirmed to Page Six.

“She experienced hate from cast and fans for being pro-Israel,” the source claimed.

In Lizzy’s Instagram bio, she states that she is “a proud Jew and Zionist.”

Lizzy has been very vocal about her faith on social media. In October, she made a video calling out Kanye West’s racist and antisemitic remarks.

“I continue to receive shockingly hateful, even threatening comments in support of his antisemitic message,” she said in the video’s caption. “My children’s great grandmother didn’t survive Auschwitz so we could sit idly by as people threaten our existence as a people. We have to speak up! I take these threats very seriously and you should too.”

Lizzy also made social media waves after editing the Vogue cover of Bella Hadid, who has previously expressed Pro-Palestinian views, to criticize and “mock” both the model and her sister and fellow supermodel, Gigi Hadid. 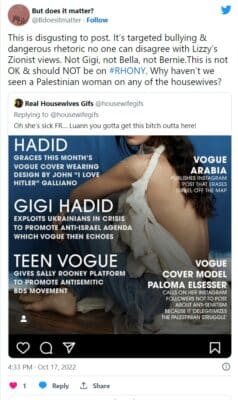 Lizzy marked up the fake cover with headlines including, “Gigi Hadid exploits Ukrainians in crisis to promote anti-Israel agenda which Vogue then echoes,” and, “Bella Hadid graces this month’s Vogue cover wearing design by John ‘I love Hitler’ Galliano.”

One critic posted the cover on Twitter, and they also wrote that Lizzy’s extreme Zionist rhetoric was “disgusting” and “dangerous” as well as exploitative.

Rumors of Lizzy’s departure had already begun swirling earlier this week after a post by Instagram account @BravoByGays posted that Lizzy was “out.” Wellness guru and influencer Emily Gellis Land also posted a video seeming to confirm the rumors.

“This person has, I feel like, been down this road before. I don’t know why they’re like waiting to like say it or not say it,” Emily said. “I’ve heard they’re gonna be in the beginning and then phased out. I heard what happens. [I’m] zero percent surprised. Lines up one hundred percent with this… persona.”

People began to speculate that she was referring to Lizzy after Emily claimed, “It’s really hard to be on television, I think, if you have… extreme views, and you don’t want to hear other people’s point of view…”

Emily noted that she’s “not involved” in filming with the show, but “she knows what happened with the reboot,” saying, “Nothing stays secret for long on the Upper East Side.”

The Bravo network also released a statement to PEOPLE, stating that “after thoughtful consideration and discussion with Lizzy, we have reached the mutual conclusion that Lizzy will not be a cast member on RHONY.”